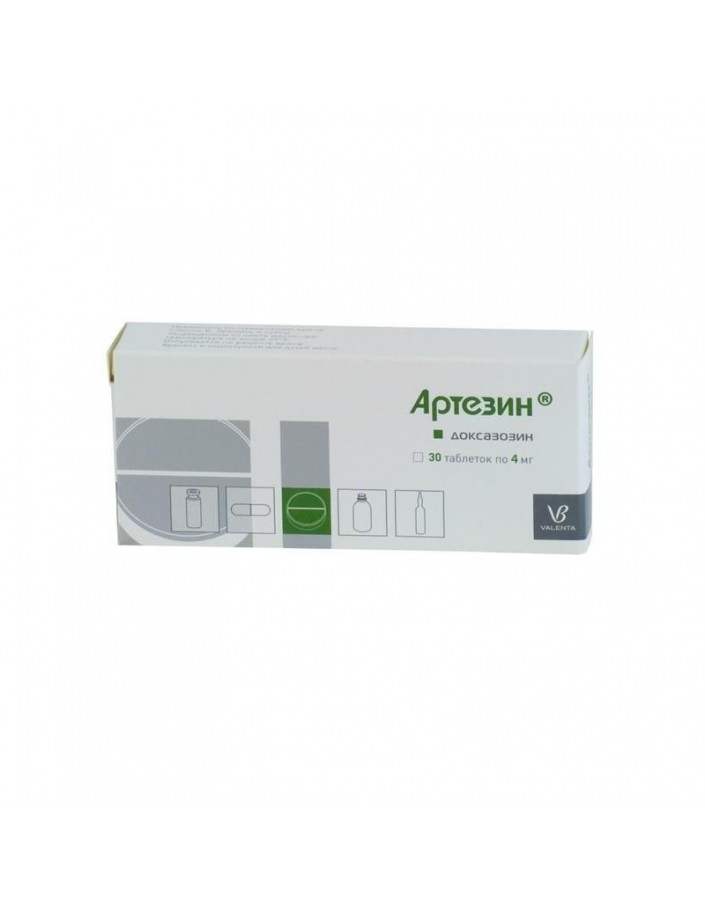 - benign prostatic hyperplasia (both in the presence of arterial hypertension and in normal blood pressure).

The drug is prescribed by mouth 1 time / day (in the morning or in the evening), regardless of the meal, without chewing and drinking plenty of water.

At hypertension The initial daily dose is 1 mg at bedtime.

After taking the first dose, the patient should be in bed for 6-8 hours. This is necessary due to the possibility of the development of the "first dose phenomenon", especially against the background of previous diuretics.

At benign prostatic hyperplasia Artezin® prescribed in an initial dose of 1 mg / day in order to minimize the possibility of orthostatic hypotension and / or syncope. If necessary, depending on the indicators of urodynamics and the presence of symptoms of BPH, the dose is increased (with an interval of 1-2 weeks) to 2-4 mg / day. The maximum daily dose is 8 mg. The recommended maintenance dose is 2-4 mg / day.

The drug is used for a long time. The duration of treatment is determined by the attending physician.

In clinical trials, orthostatic hypotension, which in rare cases can lead to syncope, has been observed most often, especially at the beginning of treatment.

The following side effects were also noted in patients with arterial hypertension (the causal relationship with taking the drug has not been established): bradycardia, tachycardia, palpitations, chest pain, angina, myocardial infarction, impaired cerebral circulation, arrhythmia.

Since the cardiovascular system: decrease in blood pressure, orthostatic hypertension.

On the part of the endocrine system: gynecomastia.

From the side of blood-forming organs: leukopenia, purpura, thrombocytopenia.

Other: back pain, feeling hot (flushes in the skin of the face), weight gain.

- Hypersensitivity to Doxazosin, a derivative of quinazolone or other components of the drug.

WITH caution the drug should be used for aortic and mitral stenosis, orthostatic hypotension, abnormal liver function.

To date, experience with the drug Artezine ® during pregnancy and during breastfeeding in patients with arterial hypertension is not enough. Therefore, despite the absence of teratogenic and embryotoxic effects according to experimental studies, Artezine® It can be prescribed during pregnancy and during breastfeeding only after a careful assessment of the expected benefits of therapy for the mother and the possible risk to the fetus or infant.

WITH caution should use the drug for violations of the liver.

Contraindication: age up to 18 years (efficacy and safety have not been established)

Particular caution should be exercised in the appointment of the drug to patients with impaired liver function, especially in cases where at the same time drugs are used that can adversely affect liver function. In cases of deterioration of the functional status of the liver, the drug should be canceled.

In order to prevent orthostatic reactions, patients should avoid unexpected and abrupt changes in body position (moving from a prone position to a standing position).

Caution should be exercised when used simultaneously with phosphodiesterase inhibitors (agents for treating erectile dysfunction), since in some patients this can lead to symptomatic hypotension.

The effect of the "first dose" is especially pronounced in the background of previous diuretic therapy and a sodium restricted diet.

Before starting treatment, it is necessary to exclude malignant tumors of the prostate gland.

Due to the fact that the drug is capable of causing orthostatic reactions at the beginning of treatment or during the period of increasing doses, it is advisable for patients to refrain from all potentially dangerous activities, in particular from driving vehicles and other vehicles and mechanisms. Taking alcohol can increase undesirable reactions.

Treatment: the patient must be given a horizontal position with raised legs. Symptomatic therapy is performed. Hemodialysis is ineffective.

The drug does not affect the degree of binding to plasma proteins Digoxin and phenytoin.

With simultaneous use with enzymes of microsomal oxidation in the liver, it is possible to increase the effectiveness of doxazosin, with inhibitors - a decrease.

By eliminating the alpha-adrenostimulating effects of epinephrine, doxazosin can lead to the development of tachycardia and arterial hypotension.

Cimetidine increases the bioavailability of doxazosin.

Phosphodiesterase inhibitors can increase the hypotensive effect (caution should be exercised).

List B. The drug should be stored in a dry, dark place and out of reach of children at a temperature not exceeding 25 ° C.