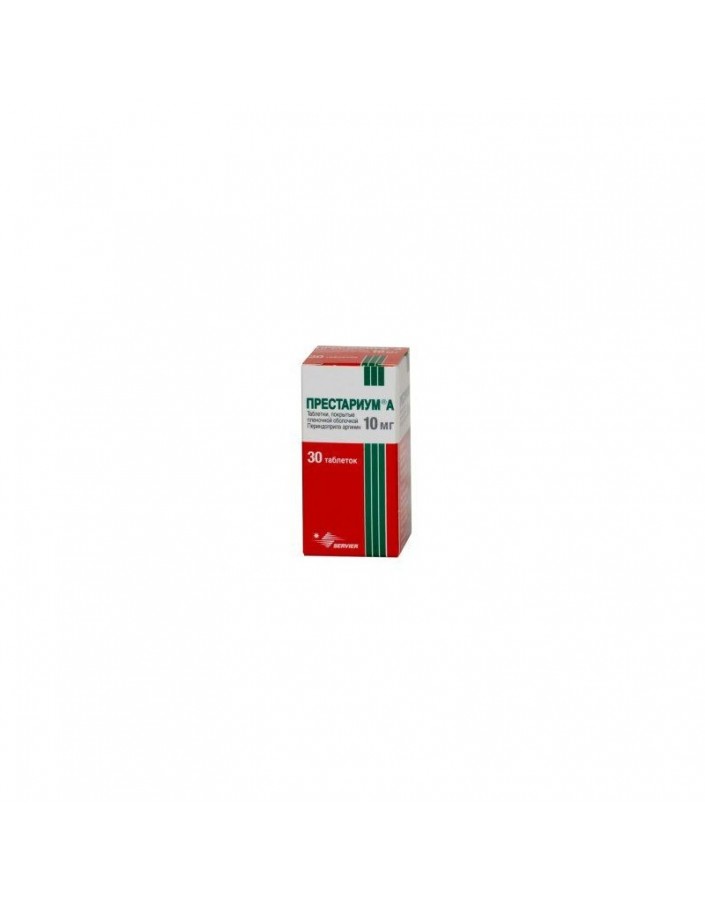 PRESTARIUM A - antihypertensive drug, ACE inhibitor. ACE, or kininase, is exopeptidase, which carries out both the conversion of angiotensin I into a vasoconstrictor substance angiotensin II, and the destruction of bradykinin, which has a vasodilator, to inactive heptapeptide.

Suppression of ACE leads to a decrease in the content of angiotensin II in the blood plasma, resulting in increased plasma renin activity (due to the inhibition of negative feedback that prevents the release of renin) and aldosterone secretion is reduced. Since ACE inactivates bradykinin, ACE suppression is accompanied by an increase in the activity of both the circulating and tissue kallikrein-kinin system, and the prostaglandin system is activated. Perindopril reduces OPS, which leads to a decrease in blood pressure. At the same time, the peripheral blood flow accelerates, but the heart rate does not increase.

Perindopril has a therapeutic effect due to its active metabolite, perindoprilat. Other metabolites of the drug have no inhibitory effect on ACE in vitro.

Discontinuation of treatment is not accompanied by the development of withdrawal syndrome. Perindopril has a vasodilating effect, helps to restore the elasticity of large arteries and the structure of the vascular wall of small arteries, and also reduces left ventricular hypertrophy. The concomitant administration of thiazide diuretics enhances the hypotensive effect. In addition, the combination of an ACE inhibitor and a thiazide diuretic also reduces the risk of developing hypokalemia in patients receiving diuretics.

Heart failure
Perindopril normalizes heart function, reducing preload and afterload. In patients with chronic heart failure who received perindopril, a decrease in filling pressure was found in the left and right ventricles of the heart; a decrease in fsr; increase in cardiac output and increase in cardiac index. A study of the drug compared with placebo showed that changes in blood pressure after the first dose of Prestarium A at a dose of 2.5 mg in patients with mild to moderate heart failure did not statistically differ from the changes in blood pressure observed after taking placebo.

These therapeutic benefits are observed both in patients with arterial hypertension, and in normal blood pressure, regardless of age, gender, presence or absence of diabetes mellitus and type of stroke.

The main evaluation criteria were cardiovascular mortality, nonfatal myocardial infarction and / or cardiac arrest with subsequent successful resuscitation. Patients with coronary artery disease with established myocardial infarction at least 3 months prior to screening, who underwent coronary revascularization at least 6 months before screening, angiographically identified stenosis (at least 70% of one or more major coronary arteries narrowed) or positive were selected for participation in the study. stress test with a history of chest pain.The drug was prescribed in addition to the standard therapy used for hyperlipidemia, hypertension and diabetes.

Most patients took antiplatelet agents, lipid-lowering drugs and beta-blockers. By the end of the study, the ratio of the number of patients taking the listed groups of drugs was 91%, 69% and 63%, respectively. After 4.2 years, the result of perindopril tertbutylamine therapy at a dose of 8 mg 1 time / day was a significant decrease in the relative risk of 20% (95% CI) of pre-determined complications: 488 (8%) patients from the group receiving perindopril tertbutylamine and 603 (9.9%) patients from the placebo group (p = 0.0003).

The result is not dependent on gender, age, blood pressure and the presence of myocardial infarction in history.

The drug is administered orally 1 time / day in the morning, before eating.

In the initial period of treatment, some patients with diuretic therapy, especially with excessive removal of fluid and / or salts, may experience an excessive decrease in blood pressure, the risk of which can be reduced by canceling the diuretic, administering an increased amount of water and / or sodium chloride, and also prescribing ACE inhibitor in lower doses. A further increase in the dose of perindopril should be carried out with caution.

During therapy with ACE inhibitors, as a rule, the content of potassium in the blood serum remains within the normal range, but hyperkalemia can sometimes develop. The combined use of ACE inhibitors and potassium-sparing diuretics (spironolactone, triamterene and amiloride) and potassium preparations, potassium-containing products, and nutritional supplements can lead to a significant increase in serum potassium concentration. In this regard, their joint appointment with ACE inhibitors is not recommended. These combinations should be used only in case of hypokalemia, observing precautions and constantly monitoring the content of potassium in blood serum.

The purpose of NSAIDs may be accompanied by a weakening of the antihypertensive effect of ACE inhibitors. Moreover, it has been established that NSAIDs and ACE inhibitors have an additive effect in relation to an increase in the content of potassium in the blood serum, while renal function may also be deteriorated. As a rule, these effects are reversible. In rare cases, acute renal failure may develop, usually resulting from an existing renal dysfunction in elderly patients or against the background of dehydration.

The antihypertensive effect of drugs may be enhanced against the background of combined use with ACE inhibitors. The use of Nitroglycerin and / or other vasodilators can lead to an additional hypotensive effect.

With simultaneous use with ACE inhibitors Allopurinol , immunosuppressants, includingcytostatic agents and systemic corticosteroids, procainamide may increase the risk of developing leukopenia.

Appointment of ACE inhibitors can enhance the hypoglycemic effect of insulin and oral hypoglycemic agents up to the development of hypoglycemia. As a rule, this phenomenon is observed in the first weeks of the combined use of these drugs in patients with renal insufficiency.

Co-administration with ACE inhibitors of tricyclic antidepressants, antipsychotics (neuroleptics), general anesthesia drugs can lead to an increase in the hypotensive effect.

Symptoms: a pronounced decrease in blood pressure, shock, electrolyte imbalance (such as an increase in the concentration of potassium ions, a decrease in sodium); renal failure, hyperventilation, tachycardia, dizziness, bradycardia, anxiety, and cough.

Treatment: with a significant decrease in blood pressure, transfer the patient to a prone position and immediately replenish the blood volume, if possible, infuse angiotensin II and / or administer iv catecholamines.With the development of sustained severe bradycardia, it may be necessary to use an artificial pacemaker. Constant monitoring of vital body functions, blood serum electrolytes and QC is necessary. Perindopril can be removed from the systemic circulation by hemodialysis. In dialysis, the use of high-flow polyacrylonitrile membranes should be avoided.