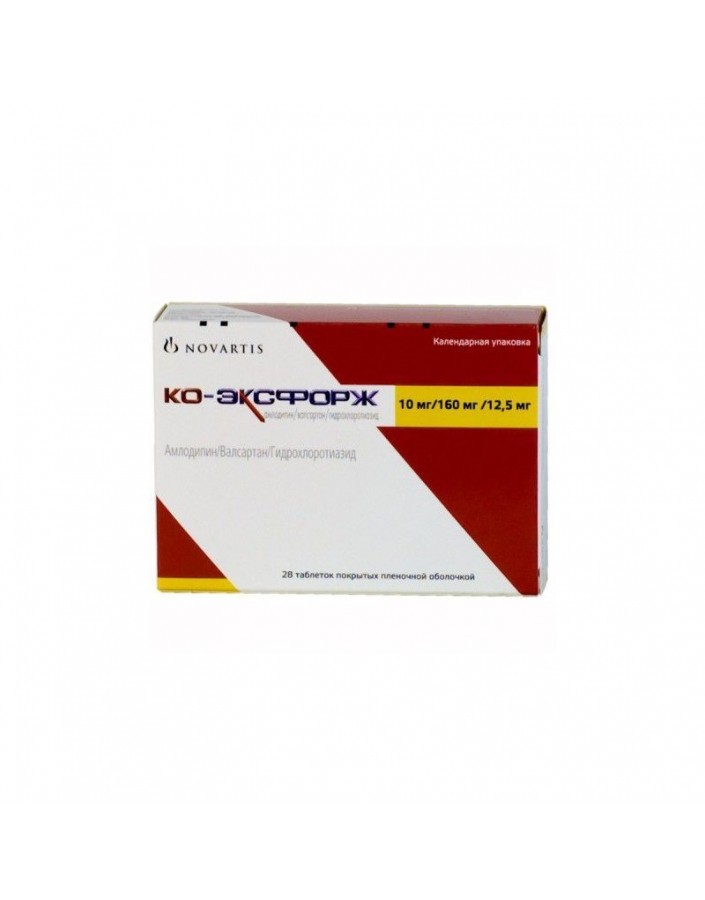 Pharmacokinetic parameters of amlodipine, valsartan and hydrochlorothiazide are characterized by linearity.

Vd is approximately 21 l / kg. In vitro studies of amlodipine have shown that in patients with arterial hypertension, approximately 97.5% of the circulating drug binds to plasma proteins .

Amlodipine is extensively (approximately 90%) metabolized in the liver to form active metabolites.

Withdrawal from plasma is biphasic with T1/2 approximately 30 to 50 hours. Css in blood plasma are achieved after prolonged use for 7-8 days.10% is displayed in unchanged form, 60% - in the form of metabolites.

After ingestion of valsartan Cmax in blood plasma is achieved in 2-4 hours. The average absolute bioavailability is 23%.

The pharmacokinetic curve of valsartan is of a descending multiexponential nature (T1/2α <1 h and T1/2β about 9 hours). When taken with food, there is a decrease in bioavailability (by AUC value) by 40% and Cmax in the blood plasma by almost 50%, although approximately 8 hours after taking the drug inside the concentration of valsartan in the blood plasma of people who took it with food, and in the group who received the drug on an empty stomach, are aligned. AUC reduction, however, is not accompanied by a clinically significant decrease in the therapeutic effect, therefore, valsartan can be prescribed regardless of the meal time.

Vd Valsartan in the equilibrium state after the on / in the introduction was about 17 liters, which indicates the absence of an extensive distribution of valsartan in the tissues. Valsartan is largely associated with serum proteins (94-97%), mainly with albumin.

Valsartan does not undergo a pronounced metabolism (about 20% of the dose taken is determined as metabolites). The hydroxyl metabolite is detected in plasma in low concentrations (less than 10% of the AUC of valsartan). This metabolite is pharmacologically inactive.

Valsartan is excreted mainly unchanged through the intestines with feces (about 83% of the dose) and with the kidneys (about 13% of the dose).After intravenous injection, plasma clearance of valsartan is about 2 l / h and its renal clearance is 0.62 l / h (about 30% of the total clearance). T1/2 is 6 hours

The kinetics of distribution and elimination is generally described as a biexponential decreasing function, with T1/2 6-15 hours. With repeated use, the kinetics of hydrochlorothiazide does not change and when used once a day, the accumulation is minimal. Seeming vd - 4-8 l / kg. 40-70% of the hydrochlorothiazide circulating in the blood plasma is bound to plasma proteins, mainly albumin. Hydrochlorothiazide also accumulates in erythrocytes in concentrations of approximately 3 times higher than in plasma.

More than 95% of the absorbed dose of hydrochlorothiazide is excreted unchanged by the kidneys in the urine.

Pharmacokinetic features of the use of Co-Exforge in children under 18 years have not been established.

In patients with impaired renal function, the pharmacokinetic parameters of amlodipine do not significantly change. There was no correlation between renal function (CK) and systemic exposure of valsartan (AUC) in patients with varying degrees of renal dysfunction. However, since the excretion of hydrochlorothiazide occurs mainly through the kidneys, impaired renal function can have a significant effect on the pharmacokinetics of hydrochlorothiazide.

Patients with impaired liver function have reduced clearance of amlodipine, which leads to an increase in AUC of approximately 40-60%. On average, in patients with liver disorders with mild (5-6 points on the Child-Pugh scale) and moderate (7-9 points on the Child-Pugh scale), the bioavailability (by AUC) of valsartan is doubled compared with healthy volunteers (appropriate age , sex and body weight).

The drug should be taken orally (preferably in the morning), washed down with a small amount of water, regardless of the meal.

If a patient has dose-dependent side effects when using dual-combination therapy with any of the components of Co-Exforge, Co-Exforge may be prescribed to achieve a similar reduction in blood pressure, containing a lower dose of the active component that caused this side effect.

The recommended daily doses of Co-Exforge are:

Have patients over 65 dose adjustment of the drug is not required.

Since the safety and efficacy of Co-Exforge children and adolescents (under 18) not yet established, the drug is not recommended for use in this category of patients.

Have sick with mild and moderate renal dysfunction (CC more than 30 ml / min) and liver (5-9 points on the Child-Pugh scale) dose adjustment of the drug is not required.

Data on cases of overdose of the drug are currently not available.

With an overdose valsartan can be expected to develop a pronounced decrease in blood pressure and dizziness.

Overdose amlodipine may result in excessive peripheral vasodilation and possible reflex tachycardia. It was also reported about the occurrence of a pronounced and prolonged decrease in blood pressure up to the development of a fatal shock.

The main clinical manifestations of overdose hydrochlorothiazide are symptoms associated with loss of electrolytes (hypokalemia, hypochloremia) and dehydration due to stimulation of diuresis. The most common symptoms of an overdose are nausea and drowsiness.Hypokalemia may be accompanied by muscle spasms. With the concomitant use of cardiac glycosides (or other antiarrhythmic drugs), hypokalemia can increase cardiac arrhythmia.

Treatment: in case of accidental overdose, induce vomiting (if the drug has been taken recently) or gastric lavage. The use of Activated carbon in healthy volunteers immediately or 2 hours after taking amlodipine significantly reduced its absorption. With a marked decrease in the patient's blood pressure, the patient should be laid with raised legs, and active measures should be taken to increase blood pressure and maintain the cardiovascular system, including regular monitoring of heart and respiratory system function, BCC and the amount of urine released. In the absence of contraindications to restore vascular tone and blood pressure, it is possible to use (with caution) a vasoconstrictor. Intravenous administration of calcium salt solutions can be effective in eliminating calcium channel blockade. Removal of valsartan and amlodipine during hemodialysis is unlikely. Hydrochlorothiazide can be removed from the systemic circulation by hemodialysis.

Inductors of isopermept CYP3A4. Since the use of amlodipine together with inducers of CYP3A4 isoenzyme (for example, Carbamazepine , phenobarbital, phenytoin, phosphenytoin, primidone, rifampicin, grapefruit juice, herbal preparations containing St. John's wort), can cause a marked decrease in blood plasma, containing St. John's wort hollowed out), can cause a dosage of application in a blood plasma that is perforated, hovering holed), with dosage levels in the blood plasma, caused by the use of dosage in the form of a dosage, holed, hovering holed) with a dosage CYP3A4, its plasma levels should be monitored.

It was established that in monotherapy with valsartan there is no clinically significant interaction with the following drugs: cimetidine, warfarin, Furosemide , digoxin, Atenolol , Indomethacin , hydrochlorothiazide, amlodipine, glibenclamide.

When applied simultaneously with dietary supplements containing potassium,Care should be taken to regularly monitor capillary levels in the blood, with potassium-sparing diuretics, potassium-containing salt substitutes, or with other drugs that may cause an increase in the level of potassium in the blood (for example, with heparin).

When using valsartan with NSAIDs, it is possible to reduce the antihypertensive effect of valsartan.

NSAIDs. It is possible to reduce the diuretic and antihypertensive effects of the thiazide component of Co-Exforge when used simultaneously with NSAIDs, for example, with Acetylsalicylic acid , indomethacin. Concomitant hypovolemia can lead to the development of acute renal failure .

Drugs that can cause an increase in plasma potassium. The risk of hypokalemia increases with the simultaneous appointment of other diuretics, GCS, ACTH, amphotericin B, carbenoxolone and acetylsalicylic acid (at a dose of more than 3 g).Caution should be exercised with simultaneous use of Co-Exforge with potassium salts, potassium-sparing diuretics, potassium-containing substitutes for edible salt, as well as drugs that can cause an increase in blood potassium (for example, heparin).

Cardiac glycosides. Thiazide diuretics can cause undesirable effects such as hypokalemia or hypomagnesemia; These conditions increase the risk of developing arrhythmias with simultaneous use of cardiac glycosides.

Hypoglycemic agents for oral administration and insulin . When using the drug in patients with diabetes mellitus, it may be necessary to adjust the dose of insulin or hypoglycemic agents for oral administration. Since the use of hydrochlorothiazide together with Metformin may develop lactic acidosis (due to dysfunction during hydrochlorothiazide therapy), caution should be exercised when using the drug Co-Exforge in patients receiving treatment with metformin.

Anticholinergics. It is possible to increase the bioavailability of thiazide diuretic with simultaneous use of m-anticholinergics (for example, atropine, biperiden), which, apparently, is associated with a decrease in gastrointestinal motility and a slower rate of gastric emptying.

Methyldopa Cases of hemolytic anemia have been reported with simultaneous administration of hydrochlorothiazide and methyldopa.

Kolestiramine reduces the absorption of thiazide diuretics, including hydrochlorothiazide.

Vitamin D and calcium salts. The combined use of thiazide diuretics, including hydrochlorothiazide, with vitamin D or calcium salts may increase the calcium content in blood serum.

Cyclosporine. Simultaneous administration of cyclosporine may increase the risk of developing hyperuricemia and the appearance of symptoms resembling the worsening of gout.

Other types of interaction. The simultaneous appointment of thiazide diuretics, including hydrochlorothiazide, may lead to an increase in the frequency of hypersensitivity reactions to Allopurinol ; increased risk of side effects of amantadine; increased hyperglycemic action of diazoxide; reducing kidney excretion of cytotoxic agents (eg, cyclophosphamide, methotrexate) and potentiating their myelosuppressive action.

It is known that the appointment of ACE inhibitors that affect the RAAS, pregnant in the II and III trimesters, leads to damage or death of the developing fetus.Given the mechanism of action of angiotensin II receptor antagonists, the risk to the fetus cannot be excluded. According to a retrospective analysis of the use of ACE inhibitors in the first trimester of pregnancy was accompanied by the development of pathology of the fetus and newborn. Hydrochlorothiazide penetrates the placental barrier. When using thiazide diuretics, including hydrochlorothiazide, pregnancy may develop embryonic or neonatal thrombocytopenia, as well as other undesirable reactions observed in adult patients. In case of unintentional use of valsartan in pregnant women, cases of spontaneous abortions, low water, and impaired renal function in newborns are described. Co-Exforge, like any other drug that has a direct effect on the RAAS, should not be prescribed during pregnancy and women planning pregnancy.

should be informed about the possible risk to the fetus associated with the use of drugs that affect the RAAS. If pregnancy is diagnosed during the period of treatment with Co-Exforge, the drug should be canceled as soon as possible.

It is not known whether valsartan and / or amlodipine passes into breast milk. In experimental studies, the release of valsartan with breast milk was noted. Hydrochlorothiazide is excreted in breast milk. Co-Exforge should not be used during breastfeeding.

The safety of Co-Exforge was evaluated in more than 2,200 patients. When using the drug Co-Exforge, adverse events were mostly few or moderately severe. Termination of drug treatment due to the development of adverse events was required in rare cases. Most often, the drug was discontinued due to the development of dizziness and a pronounced decrease in blood pressure (0.7%).

When using the drug Co-Exforge, no new adverse events were detected as compared with dual combination therapy and monotherapy with individual components.

As with the short-term intake, the good tolerability of Co-Exforge was observed with its long-term use (for a year).

The incidence of adverse events was not related to gender, age or race.

With the use of Co-Exforge, changes in laboratory parameters were minimal and did not differ from those on the background of monotherapy with individual components. While taking hydrochlorothiazide together with valsartan (triple combination therapy), a decrease in the hypokalemic effect of hydrochlorothiazide is noted.

On the part of the respiratory system: infrequently - cough, shortness of breath, irritation in the throat.