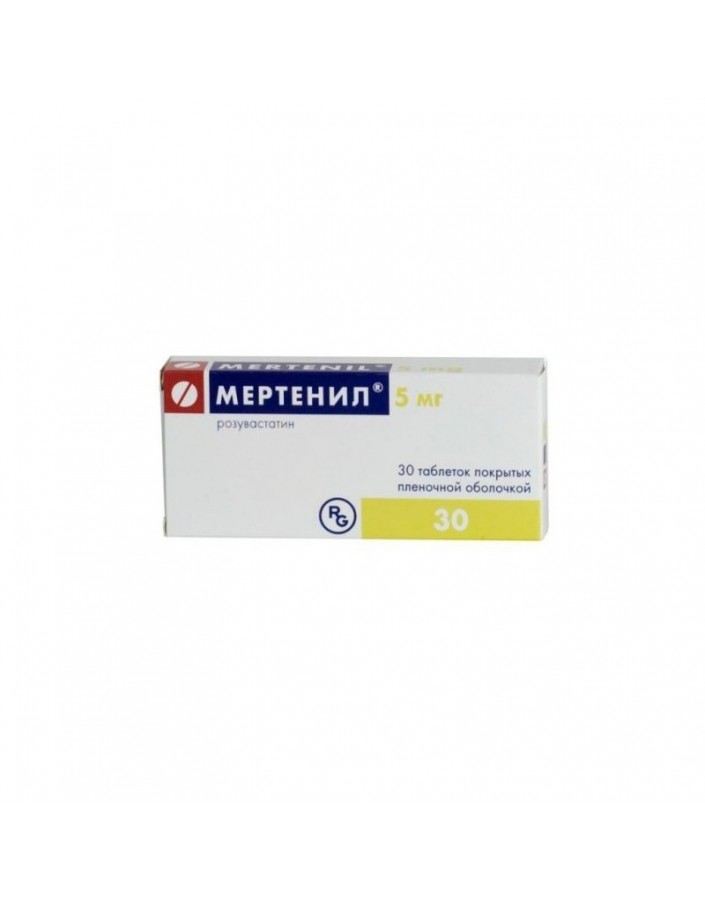 Instructions for medical use

The maximum concentration of Rosuvastatin in the blood plasma is reached 5 hours after ingestion. Absolute bioavailability is approximately 20%.

Rosuvastatin undergoes a limited metabolism (approximately 10%), is not a substrate for metabolism by enzymes of the cytochrome P450 system.CYP2C9 is the major isoenzyme involved in metabolism, while isoenzymes CYP2C19, CYP3A4 and CYP2D6 are less involved in metabolism. The main metabolite is N – desmethyl, which is 50% less active than rosuvastatin. Lactone metabolites are pharmacologically inactive. More than 90% of the pharmacological activity on inhibition of circulating HMG-CoA reductase is provided by rosuvastatin, 10% - by its metabolites.

Approximately 90% of the received dose of rosuvastatin is excreted unchanged from the body through the intestines (including absorbed and not absorbed rosuvastatin), and the rest is excreted unchanged by the kidneys. The half-life (T1 / 2) is 19 hours and does not change with increasing dose of the drug. The geometric mean plasma clearance is approximately 50 l / h (coefficient of variation 21.7%). As in the case of other inhibitors of HMG-Coa reductase, membrane transport of organic anions (OATP-C) is involved in the hepatic capture process of rosuvastatin through the membranes transporter through rosuvastatin. This carrier plays a major role in the removal of rosuvastatin by the liver.

The systemic effect of rosuvastatin increases in proportion to the dose of the drug. Changes in pharmacokinetic parameters when taking the drug several times a day is not observed.

Rosuvastatin, the active ingredient in Mertenil®, is a selective and competitive inhibitor of HMG-CoA reductase, an enzyme that converts 3-hydroxy-3-methylglutarycoenzyme A to mevalonate, which is a precursor of cholesterol.The main target of Merten® is the liver, where cholesterol (cholesterol) synthesis and low density lipoprotein catabolism (LDL) are performed.

Merten® increases the number of “liver” LDL receptors on the cell surface, increasing the uptake and catabolism of LDL.

The drug in a dose of 40 mg should be administered to patients with severe hypercholesterolemia and a high risk of developing cardiovascular diseases.

- familial homozygous hypercholesterolemia as an adjunct to diet therapy and other methods of lipid-lowering therapy (for example, LDL-apheresis) or in cases when this therapy is not effective enough

Before starting treatment, the patient should follow a standard diet with foods low in cholesterol, which should be continued during the entire period of treatment. Doses of the drug should be selected individually in accordance with the purpose of the treatment and the therapeutic response of the patient to the therapy, taking into account modern generally accepted recommendations on target lipid levels.

Choosing the initial dose of the drug, you should consider the level of cholesterol in each particular patient, as well as the possible risk of cardiovascular complications and the potential risk of side effects.If necessary, after 4 weeks you can adjust the dose.

Titration of the drug to a maximum dose of 40 mg should be carried out only in patients with severe hypercholesterolemia and a high risk of cardiovascular diseases (in particular, with familial hypercholesterolemia) in whom the target cholesterol level has not been reached with a dose of 20 mg under medical supervision. At purpose of a dose of 40 mg careful supervision over patients is recommended. It is not recommended to prescribe a dose of 40 mg in patients who have not previously taken the drug. Merten® can be taken at any time of day, inside, regardless of food intake, do not chew or chop, swallow whole, washed down with water.

For patients over the age of 70 years, the prescription of the drug in the initial dose of 5 mg is recommended. Dose adjustment due to age is not required.

Use in patients with renal failure

Use in patients predisposed to myopathy

The recommended initial daily dose in patients with predisposing factors for the development of myopathy is 5 mg.

- sleep disorders, including insomnia and nightmares

- hypersensitivity to rosuvastatin or any of the components of the drug

- predisposition to the development of myotoxic complications

- children's and teenage age up to 18 years

- hypersensitivity to rosuvastatin or any of the components of the drug

- predisposition to the development of myotoxic complications

- excessive use of alcohol

- conditions that can lead to increased plasma concentrations of rosuvastatin

- children's and teenage age up to 18 years

Vitamin K antagonists: As with other HMG-CoA reductase inhibitors, initiating Merten® therapy, or increasing the dose of a drug in patients receiving vitamin K antagonists (such as Warfarin or other coumarin anticoagulants), may lead to an increase in the international normalized ratio (INR).Canceling or lowering the dose of Merten® can cause a decrease in INR. In such cases, an INR should be monitored.

Based on data from individual studies of drug interactions, pharmacokinetic interactions with fenofibrate are not expected, however, pharmacodynamic interaction of drugs is possible. Gemfibrozil, fenofibrate, other fibrates and doses of niacin (nicotinic acid) in lipid-lowering doses (1 g or more per day) increase the risk of developing myopathy while being administered with HMG-CoA reductase inhibitors, possibly due to the fact that they can cause myopathy and when taken in monotherapy.

Protease inhibitors: at the same time, it is not recommended to prescribe Mertenil® and protease inhibitors in the treatment of patients with HIV, prolongation of the half-life of rosuvastatin is possible.

Antacids: simultaneous administration of Merten® and antacids in a suspension containing aluminum and magnesium hydroxide may result in a decrease in the concentration of Merten® in the blood plasma by about 50%. This effect is less pronounced if antacids are applied 2 hours after taking Merten®.

Erythromycin: simultaneous administration of Mertenil and Erythromycin resulted in a 20% decrease in AUC (0-t) and 30% Cmax of rosuvastatin.This relationship may be caused by increased intestinal motility, caused by taking erythromycin.

Other drugs: no clinically significant interaction is expected when co-administered with Merten® and Digoxin .

Impact on the kidneys

Proteinuria, predominantly of tubular origin, was observed in patients when taking high doses of Merten®, especially 40 mg, but in most cases it was intermittent or short-term. It is shown that such proteinuria does not mean the occurrence of acute or progression of existing kidney disease. The frequency of serious impairment of kidney function is increased when taking 40 mg of rosuvastatin.It is recommended to monitor indicators of renal function during therapy with Mertenil®.

At appointment of a dose less than 40 mg it is necessary to be careful.

When using Merten® in all dosages, and especially when taking the drug in a dose of more than 20 mg, myalgia, myopathy and, in rare cases, rhabdomyolysis were detected. Very rarely did rhabdomyolysis occur while taking ezetimibe and HMG-CoA reductase inhibitors. In this case, pharmacological interaction of drugs cannot be excluded, therefore Merten® and ezetimibe should be used with caution together. The incidence of rhabdomyolysis when taking 40 mg of rosuvastatin is increased.

Assessment of the activity of creatine phosphokinase (CPK)

Determination of CPK activity should not be carried out after intense physical exertion causing an increase in CPK, as this may make interpretation of results difficult. With an increase in CPK before therapy is more than 5 times higher than the upper limit of normal, after 5-7 days should be re-measured. If repeated measurement confirms the baseline CPK (5 times higher than the upper limit of the norm), Merten® therapy should not be started.

Mertenil®, like other HMG-CoA reductase inhibitors, should be used with extreme caution in patients with myopathy / rhabdomyolysis risk factors. These factors include:

- simultaneous reception of fibrates (for a dose of 40 mg)

In such patients, the ratio of risk to potential benefit of therapy should be assessed and clinical observation should be carried out throughout the course of therapy.

It is recommended to inform patients about the need to immediately report to the doctor about cases of sudden onset of muscle pain, muscle weakness or spasms, especially in combination with indisposition or fever.

In such patients, the activity of CPK should be monitored. Treatment should be stopped if the level of CPK is more than 5 times higher than the upper limit of the norm, or if the muscular symptoms are pronounced and cause daily discomfort (even if the activity of CPK is 5 times less than the upper limit of the norm). If symptoms disappear and CPK activity returns to a normal level, consideration should be given to re-administering Merten® or prescribing an alternate inhibitor of HMG-CoA reductase at lower doses while carefully monitoring the patient. Regular monitoring of CPK activity in patients in the absence of clinical manifestations is impractical.

However, an increase in the incidence of myositis and myopathy was found in patients taking other HMG-CoA reductase inhibitors together with fibric acid derivatives, including gemfibrozil, cyclosporine, nicotinic acid in lipid-lowering doses, antifungal agents, protease inhibitors and macrolide antibiotics. Gemfibrozil increases the risk of myopathy in combination with some inhibitors of HMG-CoA reductase. Therefore, the concomitant use of rosuvastatin and gemfibrozil is not recommended. The ratio of risk and potential benefit should be carefully evaluated when rosuvastatin is used together with fibrates or nicotinic acid in lipid-lowering doses (more than 1 g).

Like other HMG-CoA reductase inhibitors, Mertenil® should be given with particular caution to patients who abuse alcohol and / or have a history of liver disease.

It is recommended to carry out the determination of liver function parameters before and 3 months after the start of treatment.If the activity of “liver” transaminases in the serum is 3 times higher than the upper limit of normal, you should stop taking Merten® or reduce the dose taken. The frequency of pronounced abnormal liver function (associated mainly with an increase in the activity of "liver" transaminases), increases when taking 40 mg of the drug.

In patients with secondary hypercholesterolemia due to hypothyroidism, nephrotic syndrome, the treatment of the underlying disease must be carried out before starting treatment with Merten®.

Extremely rare cases of the development of interstitial lung disease have been described when taking individual statins, especially long-term ones. Clinical manifestations may include shortness of breath, dry cough, and worsening of the general condition (general weakness, weight loss, and fever). If a patient is suspected of developing interstitial lung disease, statin therapy should be discontinued.

In patients whose glucose level was 5.6–6.9 mmol / l on an empty stomach, taking rosuvastatin was associated with an increased risk of diabetes.

In the course of pharmacokinetic studies, an increase in the systemic concentration of rosuvastatin among patients of Asian origin was detected in comparison with the data obtained among patients - representatives of the European race.

Studies studying the effect of Merten® on the ability to drive a car and control mechanisms have not been conducted. However, when driving a vehicle or other mechanisms, it must be borne in mind that dizziness may occur during treatment.

Symptoms: severity of symptoms of side effects.

Treatment: symptomatic. Liver function and degree of CPK activity should be monitored. There is no specific treatment for overdose.