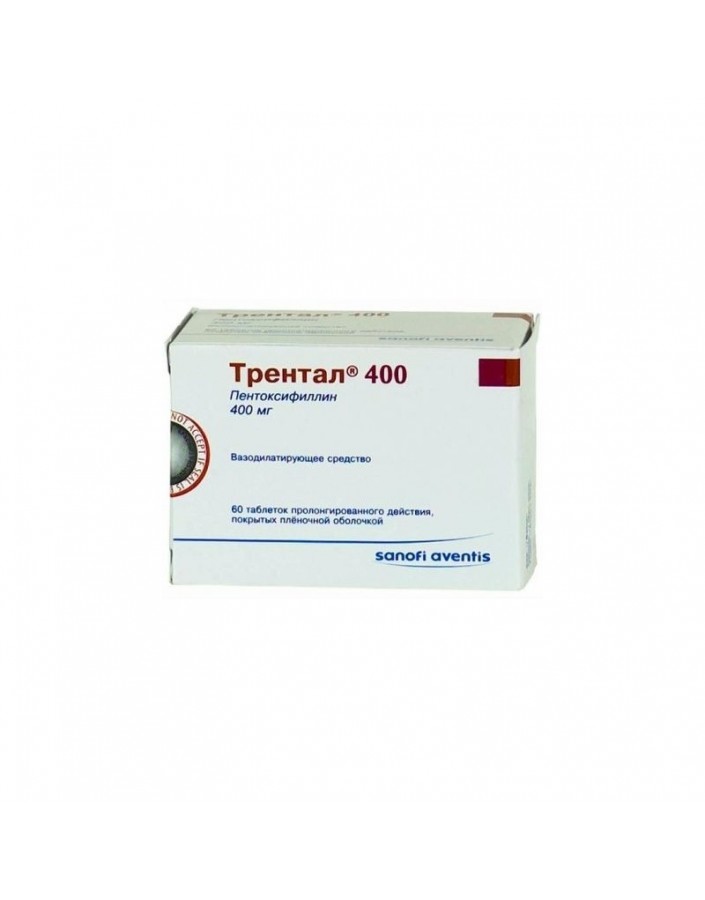 A drug that improves microcirculation. Angioprotector, a derivative of methylxanthine.
The mechanism of action of Pentoxifylline is associated with inhibition of phosphodiesterase and accumulation of cAMP in vascular smooth muscle cells, in the blood cells, in other tissues and organs.
It inhibits platelet aggregation and red blood cells, increases their flexibility, reduces the increased concentration of fibrinogen in the plasma and increases fibrinolysis, which reduces blood viscosity and improves its rheological properties. It has a weak myotropic vasodilating effect, slightly decreases the round focal disease and has a positive inotropic effect. When using the drug, there is an improvement in microcirculation and oxygen supply to tissues, to the greatest extent in the limbs and the central nervous system, and to a moderate degree in the kidneys. The drug slightly expands the coronary vessels.

The drug is contraindicated for use in pregnancy.
If necessary, the use of the drug during lactation should stop breastfeeding.

The average dose of the drug for oral administration is 400 mg (1 tab.) 2-3 times / day. The maximum daily dose is 1200 mg (3 tab.).
Tablets are taken whole, without chewing, during or immediately after a meal, drinking plenty of water.
In patients with severe impaired renal function (CC less than 30 ml / min), the dose may be reduced to 400-800 mg / day.
In patients with hepatic insufficiency, the dose of the drug is selected individually.

In cases of using Trental 400 in large doses there may be "hot flashes" (reddening of the face or feeling of heat), disorders of the digestive system, such as pressure and overflow in the stomach, nausea, vomiting, diarrhea; very rarely - cardiac arrhythmias (tachycardia).
Allergic reactions: sometimes itching, skin flushing, urticaria; rarely, severe anaphylactic / anaphylactoid reactions with the development of angioedema, bronchospasm, and even shock.
From the side of the central nervous system: possibly - dizziness, headache, agitation, sleep disturbance; very rarely are cases of aseptic meningitis.
Gastrointestinal: very rarely - increased activity of hepatic transaminases, intrahepatic cholestasis.
Cardiovascular: very rarely - attacks of angina, tachycardia, arterial hypotension.
From the blood coagulation system: very rarely - thrombocytopenia; in patients with an increased tendency to bleeding - bleeding (for example, from vessels of the skin, mucous membranes, stomach, intestines).

Symptoms: nausea, dizziness, tachycardia, lowering blood pressure, arrhythmia, skin hyperemia, chills, loss of consciousness, areflexia, tonic-clonic convulsions.
Treatment: if necessary, conduct symptomatic therapy.The patient should be given a horizontal position with raised legs. The specific antidote is unknown. They monitor the vital functions of the body and general measures aimed at maintaining them, monitor the airway; with convulsions - diazepam.

Store in a cool dry place.