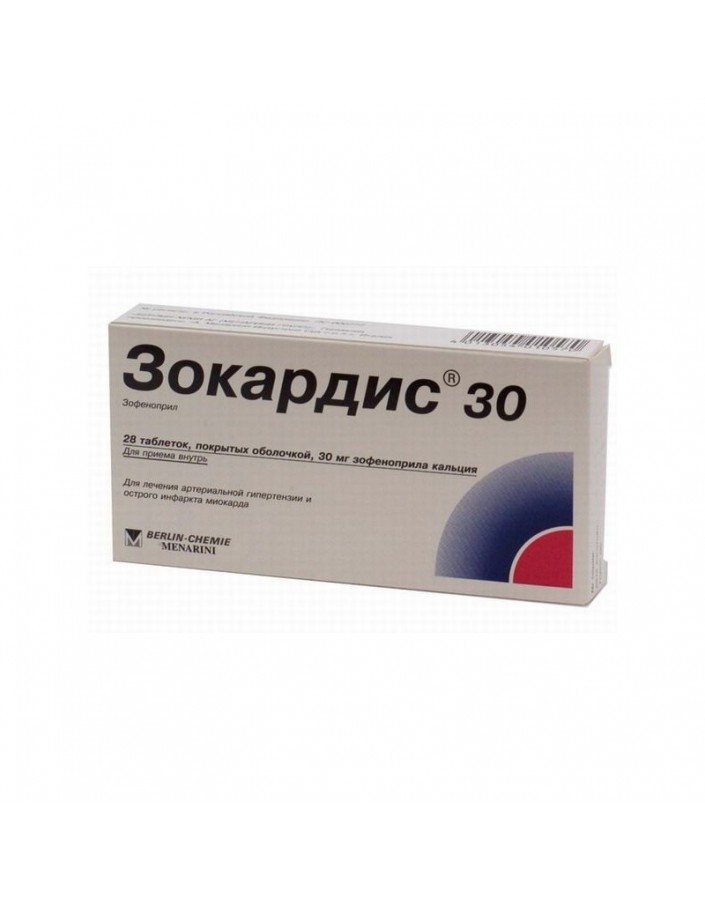 Expands the arteries to a greater extent than the veins, while the reflex increase in heart rate is not observed. Reduces the degradation of bradykinin, increases the synthesis of prostaglandin. The hypotensive effect is more pronounced with a high concentration of renin in the blood plasma than with a normal or reduced concentration. A decrease in blood pressure in the therapeutic range does not affect the cerebral circulation, the blood flow in the vessels of the brain is maintained at a sufficient level and against the background of low blood pressure. Enhances coronary and renal blood flow.

With prolonged use, left ventricular myocardial hypertrophy and myocytes of resistive-type artery walls are reduced, prevents progression of heart failure and slows down the development of left ventricular dilatation. Improves blood supply to ischemic myocardium. Reduces platelet aggregation. Zofenopril is a prodrug, becauseactivity is free sulfhydryl compound (zofenoprilat), formed as a result of thioester hydrolysis.

After ingestion, the hypotensive effect develops after 1 h, reaches a maximum after 4-6 h and lasts up to 24 h. In some cases, therapy for several weeks is necessary to achieve optimal reduction of blood pressure. In heart failure, a noticeable clinical effect is observed with prolonged treatment (6 months or more).

After oral administration, zofenopril Calcium is rapidly and completely absorbed from the gastrointestinal tract and undergoes almost complete conversion to zofenoplat.

Cmax of zofenoprilata in blood plasma is reached 1.5 hours after taking Zocardis. Binding to plasma proteins for zofenopril is 88%.

Zofenopril is rapidly metabolized in the liver to form the active metabolite of zofenoprilat. T1 / 2 zofenoprilat makes 5.5 h, the general clearance makes 1300 ml / min. Zofenoprilat is excreted mainly by the kidneys - 69%, through the intestines - 26%.

In case of arterial hypertension, in order to achieve an optimal level of blood pressure in adults, therapy should be started at a dose of 15 mg (2 pills of 7.5 mg or 1/2 tablet.30 mg) 1 time / day and gradually, with insufficient severity of the hypotensive effect, increase the dose with an interval of 4 weeks.

In case of violations of water and electrolyte balance, before the appointment of ACE inhibitors, correction of water and electrolyte metabolism and the cancellation of the therapy with diuretics for 2-3 days before the start of taking the ACE inhibitor is required. In this case, the initial dose of Zocardis is 15 mg / day. If the cancellation of diuretics and the normalization of water-electrolyte balance is impossible, then the initial dose of Zocardis should be 7.5 mg / day.

Correction of the dose of Zocardis is necessary for patients with impaired renal function or on hemodialysis. With QA> 45 ml / min, dose adjustment is not performed; with QC <45 ml / min, the dose should be reduced to 1/2 of the average therapeutic dose 1 time / day.

With normal kidney function, dosing regimen adjustment is not required in elderly people.

Patients with severe hepatic impairment do not prescribe Zocardis.

With acute heart attackmyocardium in combination therapy Zocardis is prescribed for 24 hours after the first symptoms of myocardial infarction occur and continue for 6 weeks, using the following scheme:

With an excessive decrease in blood pressure at the beginning of treatment or during the first 3 days after myocardial infarction, the initial dose is not increased or canceled.

Zocardis should be used with caution in patients with myocardial infarction over 75 years.

Tablets are taken orally, regardless of the meal (before, during or after a meal), drinking plenty of fluids.

From the senses: rarely - disorders of the vestibular apparatus, impairment of hearing and vision, tinnitus.

On the part of the hematopoietic system: in some cases, thrombocytopenia, neutropenia, agranulocytosis (in patients with autoimmune diseases), eosinophilia.

On the part of the urinary system: increased creatinine and urea, renal dysfunction, proteinuria.

From the laboratory parameters: hyperkalemia, hyponatremia; in some cases - a decrease in hematocrit and hemoglobin, increased ESR.

- angioedema associated with the use of ACE inhibitors, in history;
- porphyria;
- severe liver dysfunction;
- pregnancy;
- lactation (breastfeeding);
- age up to 18 years (efficiency and safety have not been established);
- renal failure severe;
- hypersensitivity to zofenopril and other ACE inhibitors.

Care must be taken when prescribing the drug to patients with reduced BCC (as a result of diuretic therapy, while limiting salt intake, hemodialysis, diarrhea and vomiting), because increased risk of sudden and pronounced decrease in blood pressure after the use of an ACE inhibitor, even in the initial dose.

Zocardis is contraindicated for use during pregnancy and lactation (breastfeeding).

When using the drug, women of childbearing age should use reliable methods of contraception. Zofenopril calcium is excreted in breast milk.

Newborns and infants whose mothers have taken ACE inhibitors are recommended to be closely monitored for the timely detection of marked reduction in blood pressure, oliguria, hyperkalemia, and neurological disorders, possibly due to a decrease in renal and cerebral blood flow while reducing the blood pressure caused by ACE inhibitors. In oliguria, it is necessary to maintain blood pressure and renal perfusion by injecting appropriate fluids and vasoconstrictor agents.

Treatment: the patient is transferred to a horizontal position with a low head. In mild cases - gastric lavage and ingestion of saline, in more severe cases - measures aimed at stabilizing blood pressure (in / in the introduction of a 0.9% sodium chloride solution, plasma substitutes); if necessary, the introduction of angiotensin II, hemodialysis.

The use of high-flow dialysis membranes increases the risk of Anaphylactic reactions. Correction of the dosing regimen on dialysis-free days should be carried out depending on the level of blood pressure.

When using the drug, it is necessary to carefully monitor patients with heart failure, coronary heart disease and cerebrovascular diseases, in whom a sharp decrease in blood pressure can lead to myocardial infarction, stroke or renal dysfunction.

Sudden cancellation of treatment does not lead to withdrawal syndrome (a sharp rise in blood pressure).

In patients with angioedema in the history of anamnesis, there is an increased risk of its development when taking ACE inhibitors.

The patient should be warned about the need to be careful when doing physical exercises in hot weather (the risk of dehydration and an excessive decrease in blood pressure due to a decrease in BCC).

Before performing surgical interventions (including dental) it is necessary to warn the surgeon / anesthesiologist about the use of ACE inhibitors.

During the use of the drug treatment is not recommended to drink alcohol.

Before and after treatment with ACE inhibitors, control of blood pressure, hemoglobin, potassium, creatinine, urea, liver enzyme activity, and protein content in the urine is necessary.

During the selection of a therapeutic dose, it is necessary to refrain from engaging in potentially hazardous activities that require increased concentration of attention and psychomotor speed, since dizziness is possible (especially after taking the initial dose of an ACE inhibitor while using diuretics).

When combined, the hypotensive effect of ACE inhibitors can be enhanced by other antihypertensive drugs, diuretics, general anesthesia drugs, analgesics, antipyretics, ethanol.

With simultaneous appointment with NSAIDs, the hypotensive effect of zofenopril may be reduced; with potassium-sparing diuretics - hyperkalemia; with lithium salts - slowing down the removal of lithium.

List B. The drug should be kept out of the reach of children at a temperature not exceeding 25 ° C. Shelf life - 3 years.