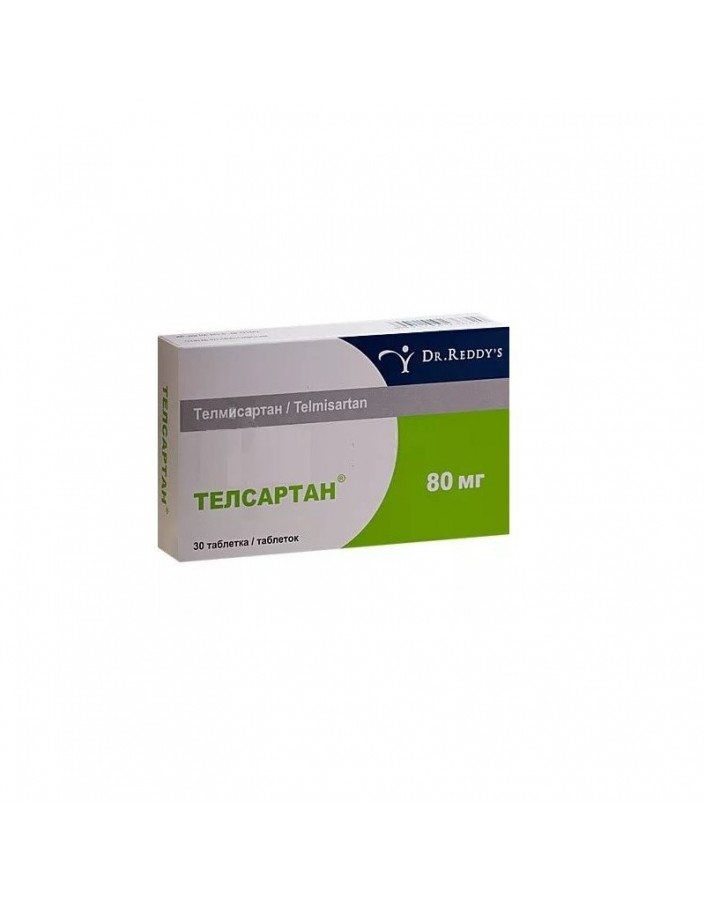 Tablets 40 mg - pills from white to grayish-white, capsule-shaped with “T” and “L” engraving and painted on one side and “40” on the other side

Tablets 80 mg - pills from white to grayish-white, capsule-shaped with “T” and “L” engraving and painted on one side and “80” on the other side.

Telmisartan is rapidly absorbed, the amount absorbed varies. Bioavailability of telmisartan is approximately 50%.

There is a difference in plasma concentrations in men and women.Cmax (maximum concentration) and AUC were approximately 3 and 2 times, respectively, higher in women compared to men without a significant effect on efficacy.

Communication with plasma proteins is more than 99.5%, mainly with albumin and alpha-1 glycoprotein. The volume of distribution is approximately 500 liters.

Telmisartan is metabolized by conjugating the parent substance with the glucuronide. Pharmacological activity of the conjugate was not detected.

Telmisartan has a biexponential pharmacokinetics with a terminal half-life of> 20 hours. Cmax and - to a lesser extent - AUC increase disproportionately with the dose. Clinically significant cumulation of telmisartan was not detected.

After oral administration, Telmisartan is almost completely excreted through the intestine in unchanged form. The total excretion in the urine is less than 2% of the dose. The overall plasma clearance is high (approximately 900 ml / min) compared with the “hepatic” blood flow (approximately 1500 ml / min).

The pharmacokinetics of telmisartan in elderly patients does not change.

Patients with renal failure on hemodialysis have lower plasma concentrations. In individuals with renal insufficiency, telmisartan binds more to plasma proteins and is not eliminated during dialysis. In renal failure, the half-life does not change.

In patients with hepatic insufficiency, the absolute bioavailability of telmisartan increases to 100%. The half-life for liver failure does not change.

The functional significance of these receptors, as well as the effect of their possible over-stimulation with angiotensin II, the concentration of which increases with the administration of telmisartan, has not been studied.

Telmisartan does not inhibit the angiotensin-converting enzyme (kinase II), which destroys bradykinin.Therefore, there is no increase in side effects associated with the action of bradykinin.

In humans, the 80 mg dose of telmisartan almost completely inhibits angiotensin II-induced increase in blood pressure (BP). The inhibitory effect is maintained for more than 24 hours and is determined after 48 hours.

After taking the first dose of telmisartan, blood pressure decreases after 3 hours. The maximum decrease in blood pressure is gradually achieved 4 weeks after the start of treatment and is maintained for long-term treatment.

The hypotensive effect lasts for 24 hours after taking the drug, including 4 hours before taking the next dose, which is confirmed by outpatient blood pressure measurements, as well as stable (above 80%) ratios of the minimum and maximum concentrations of the drug after taking 40 and 80 mg of Telsartan® in controlled clinical trials.

In patients with hypertension, Telsartan® decreases both systolic and diastolic pressure without changing the heart rate.

The antihypertensive effect of telmisartan was compared with representatives of other classes of antihypertensive drugs, such as Amlodipine, Atenolol, Enalapril, hydrochlorothiazide, Losartan, lisinopril, Ramipril and valsartan.

In the case of abrupt cancellation of telmisartan, blood pressure gradually returns to the values ​​before treatment for several days without signs of rapid renewal of arterial hypertension (no ricochet syndrome).

Patients with hypertension and diabetic nephropathy treated with Telsartan® have a statistically significant decrease in proteinuria (including microalbuminuria and macroalbuminuria).

In multicenter international clinical studies, it was proved that the cases of dry cough in patients taking telmisartan were significantly lower than in patients treated with angiotensin-converting enzyme inhibitors (ACE inhibitors).

Prevention of cardiovascular morbidity and mortality

The changes were dose-dependent.

The safety profile was comparable to that of adult patients.

Telmisartan pills are intended for daily oral administration and are taken with liquid, with or without food.

The recommended dose for adults is 40 mg once a day.

In cases where the desired blood pressure is not achieved, the dose of Telsartan® can be increased to a maximum of 80 mg once a day.

If you increase the dose, you should take into account that the maximum antihypertensive effect is usually achieved within four to eight weeks after the start of treatment.

In patients with severe arterial hypertension, a dose of telmisartan is 160 mg / day (two pills of Telsartan® 80 mg) and in combination with hydrochlorothiazide 12.5-25 mg / day was well tolerated and was effective.

Prevention of cardiovascular morbidity and mortality

The recommended dose is 80 mg once a day.

It is not clear whether doses below 80 mg are effective for reducing cardiovascular morbidity and mortality.

At the initial stage of the use of the drug Telsartan® for the prevention of cardiovascular morbidity and mortality, blood pressure control (BP) is recommended, and it may also be necessary to correct blood pressure with drugs that lower blood pressure.

Telsartan® can be taken regardless of the meal.

Changing the dose in patients with renal insufficiency is not required, including patients on hemodialysis. There is limited experience in treating patients with severe renal failure and hemodialysis. For these patients, it is recommended to start with a lower dose of 20 mg. Telsartan® is not removed from the blood during hemofiltration.

In patients with mild and moderate hepatic impairment, the daily dose of the drug should not exceed 40 mg once a day.

Dose adjustment is not required.

Violations of the circulatory and lymphatic systems: