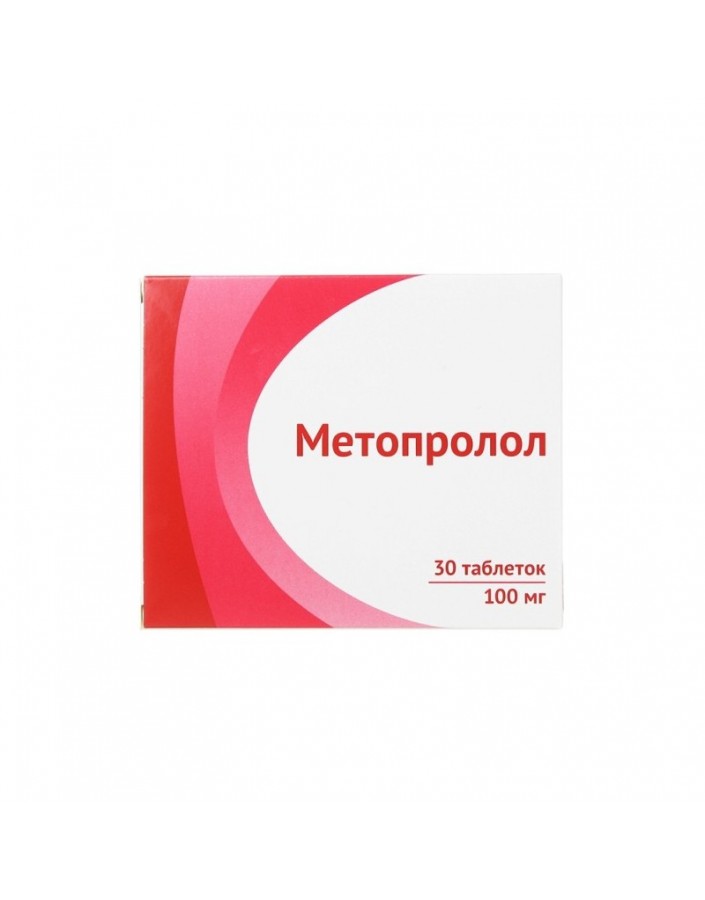 General peripheral vascular resistance at the beginning of beta-blockers (within the first 24 hours after ingestion) increases (as a result of the reciprocal increase in alpha-adrenoreceptor activity and the removal of beta 1 -adrenoreceptor stimulation), which after 1-3 days returns to baseline, and long appointment - decreases.

The hypotensive effect is due to a decrease in cardiac output and renin synthesis, inhibition of the activity of the renin-angiotensin system (important for patients with initial renin hypersecretion) and the central nervous system, and the restoration of the sensitivity of baroreceptors of the aortic arch (there is no increase in their activity in response to a decrease in blood pressure) and eventually, a decrease in peripheral sympathetic influences. Reduces high blood pressure (BP) at rest, with physical exertion and stress.

The antiarrhythmic effect is due to the elimination of arrhythmogenic factors (tachycardia, increased activity of the sympathetic nervous system, increased cAMP, arterial hypertension), a decrease in the rate of spontaneous excitation of sinus and ectopic pacemakers and a slowdown of atrioventricular conduction (mainly in antegrade and, to a lesser extent,in the retrograde directions through the atrioventricular (AV) node and along additional paths.

With supraventricular tachycardia, atrial fibrillation, sinus tachycardia, with functional heart disease and hyperthyroidism, it slows heart rate or may even lead to the restoration of sinus rhythm. Prevents migraine development. When used in moderate therapeutic doses, in contrast to non-selective beta-blockers, it has a less pronounced effect on organs containing beta 1 -adrenoreceptors (pancreas, skeletal muscles, smooth muscles of the peripheral arteries of the bronchi and uterus) and on carbohydrate metabolism. When used in large doses (more than 100 mg / day) has a blocking effect on both subtypes of beta-adrenoreceptors.

- Hypersensitivity to Metoprolol or other components of the drug, other beta-blockers.
- heart failure in the stage of decompensation.
- Cardiogenic shock.
- Syndrome of sick sinus, Prinzmetal's stenocardia.
- Atrioventricular block II and III.
- Sinoatrial blockade.
- Bradycardia (heart rate before treatment is less than 50 beats per minute).
- Arterial hypotension (in the case of use in the secondary prevention of myocardium, systolic blood pressure less than 100 mm. Hg).
- Metabolic acidosis.
- Late stages and severe violations of peripheral circulation.
- Simultaneous administration of MAO inhibitors.
- Lactation period.
- Age up to 18 years (efficacy and safety have not been established).
- When treating with a drug, it is contraindicated in / in the introduction of such slow calcium channel blockers such as Verapamil and diltiazem, or other antiarrhythmics (for example, disopyramide). The exceptions are patients in intensive care units.

In all these cases, the attending physician should carefully weigh the benefit / risk ratio when prescribing the drug.

During pregnancy (especially in the first 3 months), the drug should be used only according to strict indications, taking into account the careful weighing of the benefit / risk ratio, since so far there is no sufficient experience of its use in pregnancy, especially in the early stages of pregnancy.

If pregnant women took metoprolol, then due to the possibility of bradycardia, hypotension and hyperglycemia in the newborn, the treatment is stopped 48-72 hours before the onset of labor. If this is not possible, the newborn should be under especially careful observation for 48-72 hours after birth.

The effect of metoprolol on the newborn, when breastfeeding has not been studied, therefore, women taking the drug should stop breastfeeding.

Tablets are taken orally with a small amount of liquid, without chewing, with food or immediately after a meal. pills can be divided. The course of treatment is not limited in time and depends on the characteristics of the course of the disease.If it is necessary to cancel treatment, the dose is reduced gradually (for at least 10 days) under medical supervision.

Arterial hypertension - The initial daily dose is 50-100 mg in 1-2 doses (in the morning and in the evening). With insufficient therapeutic effect, the daily dose can be gradually increased to 100-200 mg. The maximum daily dose of 200 mg.

Angina pectoris, arrhythmias, prevention of migraine attacks - 100-200 mg per day in two doses (in the morning and in the evening).

Secondary prevention of myocardial infarction - 200 mg per day in two doses (in the morning and in the evening).

When a therapeutic effect is achieved, the dose is reduced (under the supervision of a physician). Older patients are advised to begin treatment with 50 mg / day.

On the part of the respiratory system: nasal congestion, difficulty breathing out (bronchospasm when administered at high doses - loss of selectivity and / or in predisposed patients), shortness of breath.

Other: backache or joint pain, as well as all beta-blockers in single cases, can cause a slight increase in body weight, decrease in libido and / or potency, with a sharp cessation of treatment - withdrawal syndrome (increased angina attacks, increased blood pressure).

If necessary, for patients with diabetes mellitus, a dose of insulin or hypoglycemic drugs administered orally should be selected individually.

The patient should be trained in the method of counting heart rate and instructed on the need for medical consultation with a heart rate less than 50 beats / min.

When receiving a dose of more than 200 mg per day decreases cardioselectivity.

In heart failure, treatment with metoprolol begins only after reaching the stage of compensation. It is possible to increase the severity of hypersensitivity reactions (against the background of an aggravated allergic history) and the lack of effect from the administration of usual doses of epinephrine (adrenaline). May exacerbate symptoms of peripheral arterial circulation.

The abolition of the drug is carried out gradually, reducing the dose within 10 days.With a sharp cessation of treatment, a “withdrawal” syndrome may occur (increased angina attacks, increased blood pressure). Special attention in case of drug withdrawal should be given to patients with angina.

In case of angina pectoris, the selected dose of the drug should provide the heart rate at rest within 55-60 beats / min, with a load - no more than 110 beats / min.

Patients using contact lenses should take into account that during treatment with beta-blockers it is possible to reduce the production of tear fluid.

Metoprolol may mask some clinical manifestations of thyrotoxicosis (for example, tachycardia). Sharp cancellation in patients with thyrotoxicosis is contraindicated, as it can strengthen the symptoms.

In case of diabetes mellitus, it can mask tachycardia caused by hypoglycemia. Unlike non-selective beta-adrenergic blockers, insulin-induced hypoglycemia practically does not increase and does not delay the restoration of blood glucose concentration to normal levels.

If necessary, assignment to patients with bronchial asthma as a concomitant therapy using beta 2 -adrenostimulyatory; with pheochromocytoma - alpha-blockers.

If surgery is necessary, the anesthesiologist should be warned about the therapy being conducted (the choice of anesthetics for general anesthesia with minimal negative inotropic effects), and it is not recommended to cancel the drug.

Drugs that reduce the supply of catecholamines (for example, reserpine) can enhance the effect of beta-blockers, so patients taking such combinations of drugs should be under constant medical supervision to detect excessive blood pressure and bradycardia.

Special monitoring should be carried out for patients with depressive disorders taking metoprolol; in case of development of depression caused by taking beta-blockers, it is recommended to stop therapy.

During treatment with metoprolol, appropriate clothing should be worn, since The drug may cause skin allergies to sunlight.

In elderly patients, it is recommended to monitor liver function. Correction of the dosing regimen is required only in case of increasing bradycardia (less than 50 beats / min) in elderly patients, a pronounced decrease in blood pressure (systolic blood pressure below 100 mm Hg), atrioventricular block, bronchospasm, ventricular arrhythmias, severe liver dysfunction It is sometimes necessary to discontinue treatment.

Due to the lack of sufficient clinical data, the drug is not recommended for use in children.

During the period of treatment, it is necessary to refrain from driving vehicles and practicing potentially hazardous activities that require high concentration of attention and psychomotor speed, and avoid taking ethanol.

Not recommended simultaneous use with monoamine oxidase inhibitors (MAO) due to a significant increase in the hypotensive effect. A break in treatment between taking MAO inhibitors and metoprolol should be at least 14 days.

Simultaneous i / v verapamil may cause cardiac arrest. The simultaneous appointment of Nifedipine leads to a significant reduction in blood pressure.

Means for inhalation anesthesia (derivatives of hydrocarbons) increase the risk of inhibition of myocardial function and the development of arterial hypotension.

There is an increase in the inhibitory effect on the central nervous system - with ethanol; the sum of the cardiodepressive effect - with the means for anesthesia; increased risk of peripheral circulatory disorders - with ergot alkaloids.

When taken together with oral hypoglycemic agents, their effect may be reduced; with insulin - increasing the risk of hypoglycemia, increasing its severity and lengthening, masking some of the symptoms of hypoglycemia (tachycardia, sweating, increased blood pressure).

When combined with antihypertensive drugs, diuretics, Nitroglycerin or slow calcium channel blockers, a sharp decrease in blood pressure may develop (special carenecessary when combined with prazosin); increase in the severity of HR reduction and inhibition of atrioventricular conductivity when metoprolol is used with verapamil, diltiazem, antiarrhythmic drugs (amiodarone), reserpine, clonidine, guanphacine, general anesthesia and cardiac glycosides.

Reduces clearance of xanthine (except diphillin), especially in patients with initially increased clearance of theophylline under the influence of smoking. Reduces the clearance of Lidocaine, increases the concentration of lidocaine in the blood plasma. Strengthens and prolongs the action of anti-depolarizing muscle relaxants; lengthens the anticoagulant effect of coumarins.

When combined with ethanol increases the risk of a pronounced decrease in blood pressure.

Symptoms: severe severe sinus bradycardia, dizziness, nausea, vomiting, cyanosis, marked reduction in blood pressure,arrhythmia, ventricular premature beats, bronchospasm, syncope, in acute overdose - cardiogenic shock, loss of consciousness, coma, atrioventricular block (up to the development of complete transverse block and heart failure), cardialgia. The first signs of overdose appear after 20 minutes - 2 hours after taking the drug.
Treatment: gastric lavage and the appointment of absorbent funds; symptomatic therapy: with a marked reduction in blood pressure - the patient should be in the Trendelenburg position; in case of excessive reduction of blood pressure, bradycardia and heart failure - in / in, with an interval of 2-5 minutes, bata-adrenostimulyatory - to achieve the desired effect or in / in 0.5-2 mg of atropine sulfate. In the absence of a positive effect - dopamine, dobutamine or norepinephrine (norepinephrine). As a follow-up, perhaps, the appointment of 1-10 mg of glucagon, staging transvenous intracardial electrostimulator. When bronchospasm should be introduced into / in stimulators beta 1 -adrenoreceptors. For convulsions, slow i.v. administration of diazepam. Hemodialysis is not effective.

Store at a temperature not higher than 30 ° С, in a dry place.