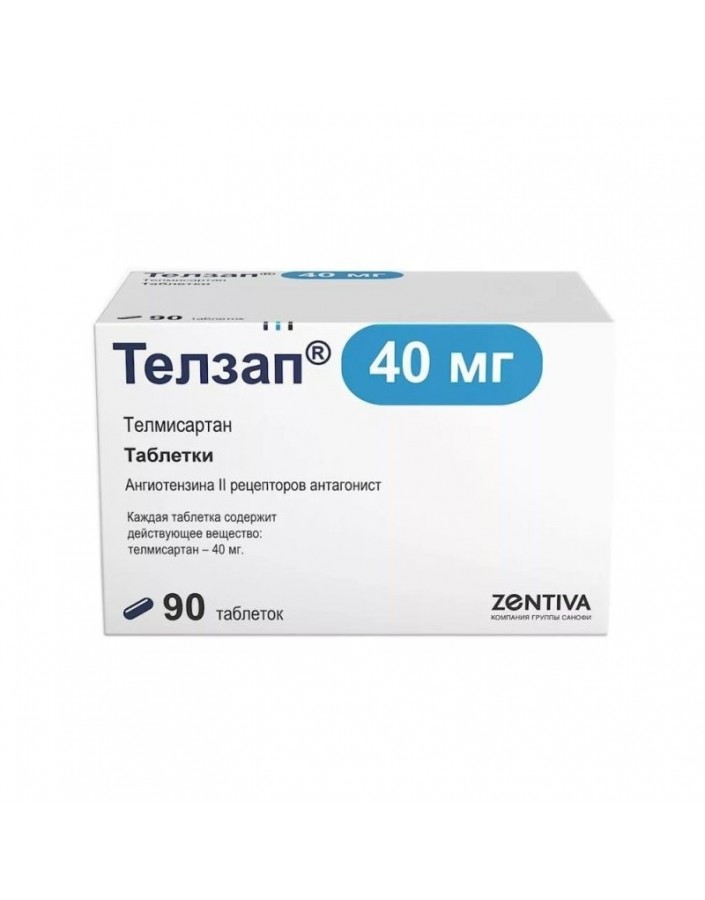 Telmisartan is a specific angiotensin II receptor antagonist (type AT1), effective when taken orally. Possesses very high affinity for the AT subtype1-receptors through which the action of angiotensin II is realized. Telmisartan displaces angiotensin II from its association with the receptor, not having the action of an agonist on this receptor; binds only to the AT subtype1receptor angiotensin II. Binding is sustainable. Telmisartan has no affinity for other receptors, incl. to AT2-receptors and other less studied angiotensin receptors. The functional significance of these receptors, as well as the effect of their possible over-stimulation with angiotensin II, the concentration of which increases with the administration of telmisartan, has not been studied. Telmisartan reduces the concentration of aldosterone in the blood plasma, does not reduce the activity of renin and does not block the ion channels. Telmisartan does not inhibit ACE (kininase II), which also catalyzes the destruction of bradykinin. This avoids the side effects associated with the action of bradykinin (for example, dry cough).

In the case of abrupt cessation of taking telmisartan, blood pressure over several days gradually returns to its original level without developing withdrawal syndrome.

The incidence of dry cough was significantly lower during the use of telmisartan, in contrast to ACE inhibitors.

In patients aged 55 and older with coronary artery disease, stroke, transient ischemic attack, peripheral artery disease, or complications of type 2 diabetes (for example, retinopathy, left ventricular hypertrophy, macro- or microalbuminuria) with a history of cardiovascular disease. events, telmisartan had a ramipril-like effect on reducing the combined endpoint: cardiovascular mortality from myocardial infarction without fataloutcome, stroke without death and hospitalization due to chronic heart failure.

Telmisartan was as effective as Ramipril in reducing the frequency of secondary points: cardiovascular mortality, non-fatal myocardial infarction, or non-fatal stroke.

Patients of childhood and adolescence

The safety and efficacy of telmisartan in children and adolescents under the age of 18 years have not been established.

When ingested telmisartan is rapidly absorbed from the gastrointestinal tract. Bioavailability - 50%. When taken simultaneously with food, the decrease in AUC ranges from 6% (when taken at a dose of 40 mg) to 19% (when taken at a dose of 160 mg). After 3 hours after administration, the plasma concentration levels out, regardless of whether telmisartan was taken simultaneously with food or not. There was no linear relationship between the dose of the drug and its plasma concentration. Cmax and, to a lesser extent, AUCs increase disproportionately with increasing doses when used in doses above 40 mg / day.

Metabolized by conjugation with glucuronic acid. Conjugate does not possess pharmacological activity.

T1/2 is more than 20 hours. Excreted through the intestine in unchanged form, the excretion by the kidneys - less than 1%. Total plasma clearance is high (about 1000 ml / min) compared with hepatic blood flow (about 1500 ml / min).

There is a difference in the plasma concentrations of telmisartan in men and women. WITHmax and AUC were approximately 3 and 2 times, respectively, higher in women compared to men without significant effect on efficacy.

The pharmacokinetics of telmisartan in elderly patients over 65 years of age does not differ from younger patients. Dose adjustment is not required.

In patients with mild and moderate liver dysfunction (Child-Pugh class A and B), the daily dose of the drug should not exceed 40 mg.

The drug is taken orally, 1 time / day, regardless of the meal; pills should be washed down with liquid.

Initial recommended dose of Telzap® makes 40 mg (1 tab.) 1 time / day. In some patients, it may be effective to take the drug at a dose of 20 mg / day. A dose of 20 mg can be obtained by dividing a 40 mg pill in half over the risk. In cases where the therapeutic effect is not achieved, the recommended dose of Telzap® may be increased to a maximum of 80 mg 1 time / day.

The recommended dose of Telzap® - 80 mg 1 time / day. In the initial period of treatment, monitoring of the level of blood pressure is recommended; correction of antihypertensive therapy may be required.

Experience with telmisartan patients with severe renal failure or hemodialysis patientslimited These patients recommended a lower initial dose of 20 mg / day. For patients with mild to moderate renal dysfunction dose adjustment is not required.

Concomitant use of the drug Telzap® with aliskiren is contraindicated in patients with renal insufficiency (GFR less than 60 ml / min / 1.73 m2 surface area of ​​the body).

The simultaneous use of the drug Telzap® ACE inhibitors are contraindicated in patients with diabetic nephropathy.

Patients with mild and moderate hepatic insufficiency (class A and B according to Child-Pugh classification) the drug should be prescribed with caution, the dose should not exceed 40 mg 1 time / day. Drug Telzap® contraindicated patients with severe liver failure (Child-Pugh class C).

Use of the drug Telzap® at children and adolescents under the age of 18 contraindicated due to lack of safety and efficacy data.

Within each group, according to the frequency of occurrence, undesirable reactions are presented in order of decreasing severity.

On the part of the immune system: rarely - an anaphylactic reaction, hypersensitivity.

On the part of the organ of vision: rarely - visual disturbances.

On the part of the organ of hearing and labyrinth disorders: infrequently - vertigo.

- obstructive diseases of the biliary tract;

- combined use with aliskiren in patients with diabetes mellitus or severe renal dysfunction (GFR less than 60 ml / min / 1.73 m2 surface area of ​​the body);

- simultaneous use with ACE inhibitors in patients with diabetic nephropathy;

- hereditary intolerance to fructose (due to the presence of sorbitol in the composition of the drug);

- hypersensitivity to the active substance or any excipients of the drug.

WITH caution the drug should be administered in case of bilateral stenosis of the renal arteries or stenosis of the artery of the only functioning kidney; renal dysfunction; mild and moderate liver dysfunction; lower bcc on the background of previous diuretic intake, restriction of salt, diarrhea or vomiting; hyponatremia; hyperkalemia; condition afterkidney transplantation (no experience); severe chronic heart failure; stenosis of the aortic and mitral valve; hypertrophic obstructive cardiomyopathy; primary hyperaldosteronism (efficacy and safety have not been established); Negroid patients.

Currently, there is no reliable information about the safety of telmisartan in pregnant women. In animal studies revealed reproductive toxicity of the drug. Use of the drug Telzap® contraindicated during pregnancy.

Contraindicated use of the drug for obstructive diseases of the biliary tract; severe liver dysfunction (Child-Pugh class C).