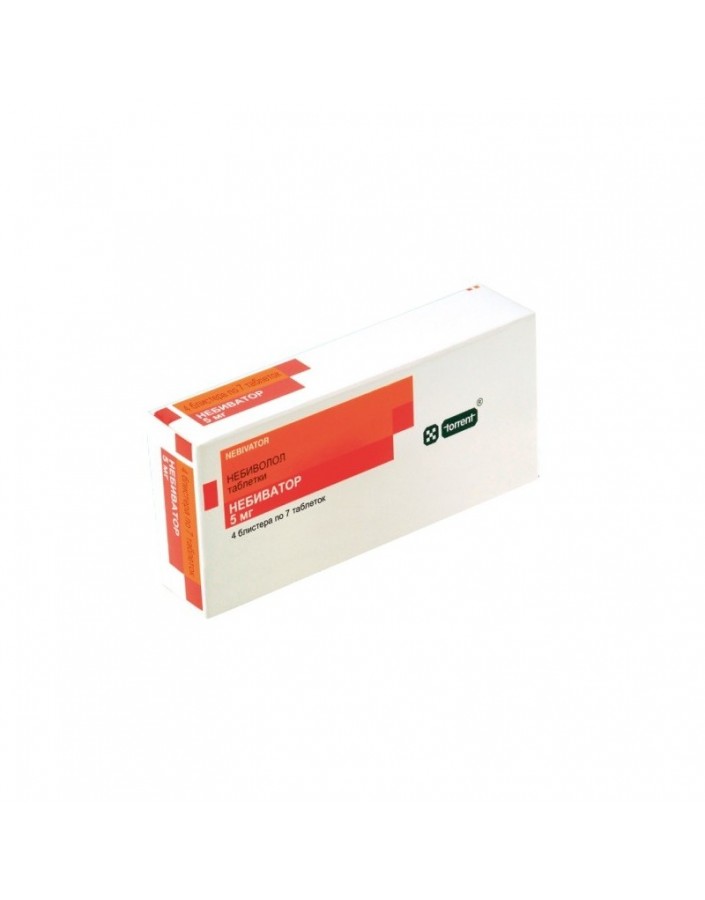 Pharmachologic effect:
Cardioselective beta1-adrenoblocker; It has a hypotensive, antianginal and antiarrhythmic effect. Reduces increased blood pressure at rest, with physical exertion and stress. Competitively and selectively blocks synaptic and extrasynaptic beta1-adrenoreceptors, making them inaccessible to catecholamines, modulates the release of endothelial vasodilating factor (NO). The hypotensive effect is also due to a decrease in the activity of the RAAS (does not directly correlate with changes in plasma renin activity). In the first days of treatment increases the OPSS, in the future, with prolonged use, it is normalized or reduced. The hypotensive effect occurs after 2-5 days, a stable effect is noted after 1-2 months. Reducing the oxygen demand of the myocardium (reducing heart rate and reducing myocardial contractility) reduces the number and severity of angina attacks and increases exercise tolerance. By increasing the end-diastolic pressure in the LV and increasing the stretching of the muscle fibers of the ventricles can increase the oxygen demand, especially in patients with CHF. The antiarrhythmic effect is due to the suppression of cardiac automatism (including in the pathological focus) and the slowing down of AV conduction.

Pharmacokinetics:
After oral administration, absorption from the gastrointestinal tract is rapid. Food intake does not affect absorption.Bioavailability is 12% in people with a 'fast' metabolism (the effect of 'first pass') and almost complete in people with a 'slow'. Plasma protein binding is 98.1% for D-nebivolol, 97.9% for L-nebivolol. Metabolized by alicyclic and aromatic hydroxylation and partial N-dealkylation; the resulting hydroxy and amino derivatives are conjugated with glucuronic acid and displayed as O- and N-glucuronides. T1 / 2 hydroxymetabolites - 24 h, enantiomers of nebivolol - 10 h (in persons with a 'fast' metabolism); hydroxymetabolites - 48 h, necivolol enantiomers - 30-50 h (in individuals with a 'slow' metabolism). Excreted by the kidneys (38%), intestines (48%).

Dosing regimen:
Inside, at the same time of day, regardless of the meal, without chewing and drinking plenty of liquid.In case of arterial hypertension and ischemic heart disease - 2.5-5 mg / day, if necessary up to the maximum daily dose - 10 mg / day; with CRF and patients over 65, the initial dose is 2.5 mg / day, if necessary, 5 mg. With CHF, treatment is started from 1.25 mg 1 time per day with a gradual increase (with an interval of 1 week) to 2.5-5 mg 1 time per day, if necessary up to a maximum dose of 10 mg / day.

Special instructions:
In 'smokers', beta-blockers are less effective. Control of patients taking beta-blockers includes monitoring of heart rate and blood pressure (at the beginning of the reception - daily, then 1 time in 3-4 months), blood glucose concentration in patients with diabetes (1 time in 4-5 months). In elderly patients, it is recommended to monitor renal function (1 time in 4-5 months). May exacerbate manifestations of peripheral arterial blood circulation disorders. With diabetes, it can mask hypoglycemia. When hyperthyroidism levels tachycardia. Perhaps increased response to pollen and other allergens with a tendency to allergies.A sudden discontinuation of beta-adrenergic blocking drugs is not allowed (with abrupt discontinuation of treatment, the development of 'withdrawal' syndrome is possible), and, if possible, treatment should be stopped gradually, reducing the dose within 10 days. Patients using contact lenses should take into account that during treatment with beta-blockers it is possible to reduce the production of tear fluid. During pregnancy, prescribed only under strict indications (due to the possible development of newborn bradycardia, hypotension, hypoglycemia and respiratory paralysis). Treatment must be interrupted 48-72 hours before delivery. In cases where this is not possible, it is necessary to ensure strict monitoring of newborns within 48-72 hours after delivery. During the period of treatment, care must be taken when driving and engaging in other potentially hazardous activities that require increased concentration and psychomotor reactions.