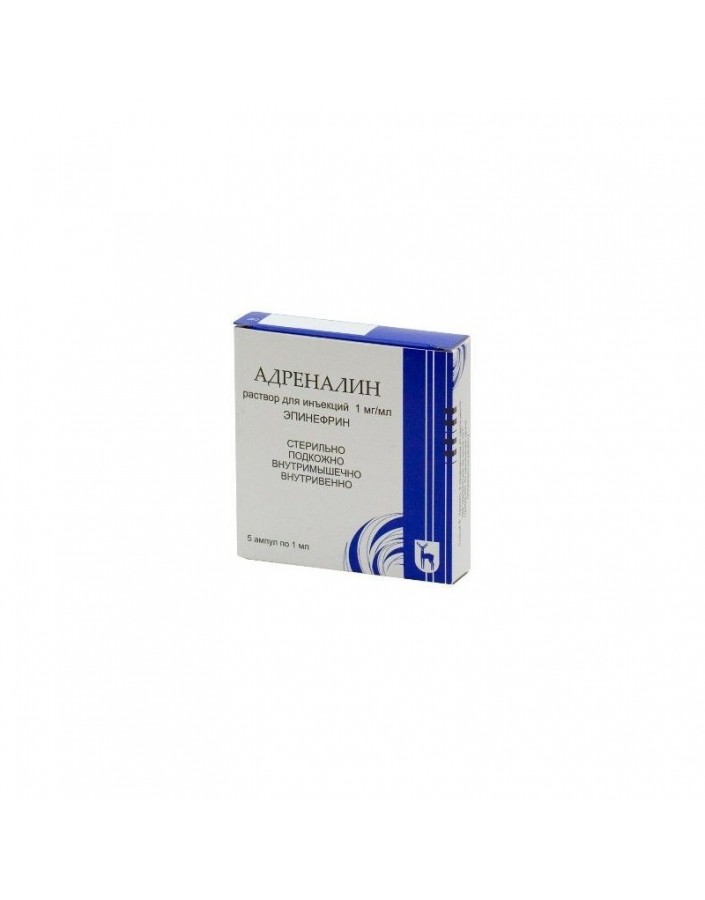 Epinephrine hydrochloride is a cardiostimulating, vasoconstrictor, hyperglycemic, hypertensive agent. White or white with a grayish tinge crystalline powder, easily soluble in water, slightly soluble in alcohol, changed by the action of light and oxygen. Epinephrine hydrochloride stimulates alpha and beta adrenoreceptors. It has a pronounced effect on smooth muscles of internal organs, cardiovascular and respiratory systems, activates fat and carbohydrate metabolism. At the cellular level, the effect is due to the activation of adenylate cyclase of the inner surface of the cell membrane, an increase in the level of intracellular cAMP and the entry of Calcium ions into the cell.The first phase of action is primarily due to the stimulation of beta-adrenergic receptors of various organs and is manifested by tachycardia, an increase in cardiac output, increased excitability and conduction of the myocardium, arteriolo- and bronchodilation, as well as a decrease in uterine tone, inhibition of allergic reactions and the mobilization of glycogen from the liver and fatty acids from fat depot Then, alpha-adrenoreceptors are excited and the vessels of the organs of the abdominal cavity, skin, mucous membranes, and to a lesser extent, skeletal muscles are narrowed, the blood pressure (mainly systolic), PRSP increases; The pressure effect can cause a short-term reflex slowing of the heart rate.

Parenterally administered adrenaline hydrochloride is very rapidly destroyed by monoamine oxidase and catechol-O-methyltransferase of liver, kidney, intestinal mucosa, axons. T1 / 2 is 1-2 minutes. Excretion of metabolites (vanillic acid) is carried out by the kidneys.

hypoglycemia due to insulin overdose;

as a vasoconstrictor and anti-inflammatory agent in ENT and ophthalmologic practice.

Subcutaneously and intramuscularly, sometimes intravenously with 0.3-1 ml of 0.1% solution of epinephrine hydrochloride.

With acute cardiac arrest at the heart at a dilution of 1: 10,000, during resuscitation it is possible to administer it in an increasing dose - every 5 min increase the dose by 1 ml.

When glaucoma 1-2% adrenaline hydrochloride solution in drops. Injection solution may be prescribed as eye drops.

Local Adrenaline hydrochloride is used to stop bleeding - use swabs moistened with a solution of the drug.

Arterial hypertension, marked atherosclerosis, diabetes mellitus, thyrotoxicosis, angle-closure glaucoma, pregnancy. Epinephrine hydrochloride should not be used during anesthesia with ftorotan (due to the appearance of arrhythmias).

Beta-blockers are shown for the prevention of arrhythmias on the background of epinephrine.

Epinephrine hydrochloride enhances the effect of aminophylline and drugs that increase the function of the thyroid gland.