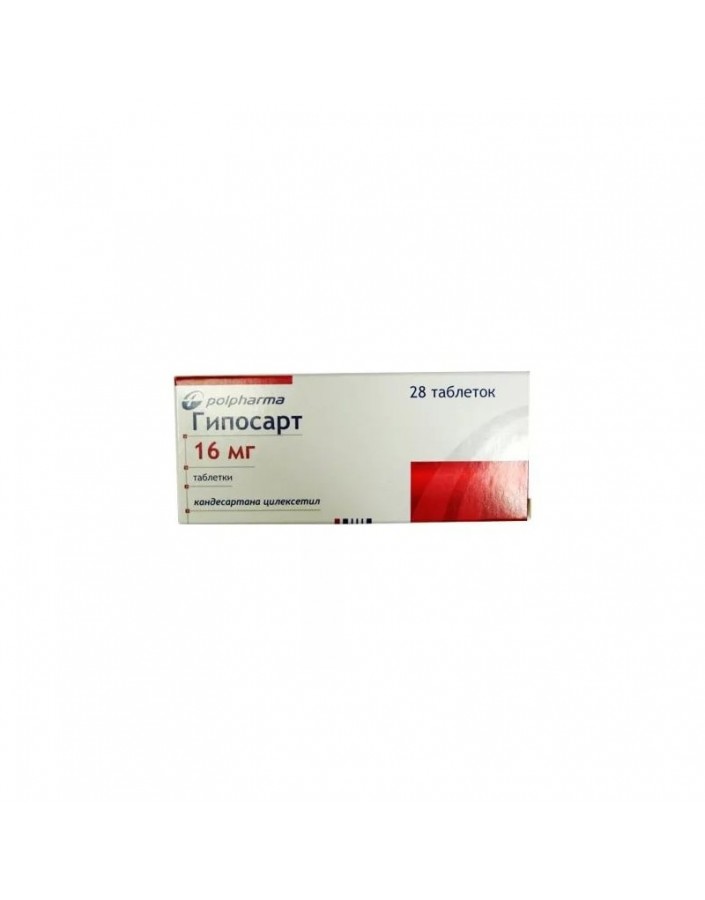 Pharmacodynamics. Angiotensin II is the main enzyme of the renin-angiotensin-aldosterone system (RAAS), which is involved in the pathogenesis of arterial hypertension (AH), heart failure and other cardiovascular diseases. Candesartan is a selective antagonist of angiotensin II receptor, subtype 1 (AT1 receptor). Does not show agonist properties (does not affect angiotensin-converting enzyme (ACE) and does not lead to accumulation of bradykinin or substance P, does not bind to receptors of other hormones, does not affect the state of ion channels involved in the regulation of the cardiovascular system), resulting in blocking Angiotensin II AT1 receptors compensate for dose-dependent increases in renin activity, angiotensin I concentration, angiotensin II, and a decrease in plasma aldosterone concentration. Arterial hypertension. Ingestion of candesartan provides a dose-dependent, smooth decrease in blood pressure (BP) by reducing the total peripheral vascular resistance (OPS) without a reflex increase in heart rate (HR).There is no data on the development of severe arterial hypotension after taking the first dose or on the development of "withdrawal" syndrome after discontinuing therapy. The onset of the antihypertensive effect after taking the first dose of the drug usually develops within 2 hours, the effect lasts 24 hours. With ongoing therapy with candesartan in a fixed dose, the maximum decrease in blood pressure is usually reached within 4 weeks and lasts throughout the treatment. The addition of thiazide diuretic hydrochlorothiazide to candesartan enhances its antihypertensive effect. The age and sex of the patient do not affect the effectiveness of the drug. Candesartan increases renal blood flow and does not alter or increase the glomerular filtration rate, while renal vascular resistance and filtration fraction decrease. Candesartan has a less pronounced antihypertensive effect in patients of the Negroid race (a population with a predominantly low renin activity in the blood plasma). There are no data on the effect of candesartan on the progression of diabetic nephropathy. In patients with arterial hypertension and type 2 diabetes mellitus, candesartan does not adversely affect the blood glucose concentration and lipid profile. Heart failure. Candesartan therapy reduces mortality and hospitalization in patients with chronic heart failure (CHF), regardless of age, gender, and concomitant therapy, leading to a reduction in the functional class of CHF according to the NYHA classification.Candesartan is effective in patients taking beta-blockers in combination with ACE inhibitors; however, its effectiveness does not depend on the dose of the ACE inhibitor. In patients with CHF and reduced systolic function of the left ventricle (left ventricular ejection fraction (LVEF) is less than 40%), candesartan reduces the round focal disease and the wedging pressure in the pulmonary capillaries. Pharmacokinetics. Candesartan cilexetil is a prodrug. After oral administration, candesartan cilexetil is rapidly converted into the active substance - candesartan, by means of ether hydrolysis. When absorbed from the digestive tract, it binds strongly to AT1 receptors and slowly dissociates, has no agonist properties. Suction and distribution. Absolute bioavailability of candesartan is approximately 40% after oral administration. Relative bioavailability is approximately 34%. The maximum concentration in serum is reached in 3-4 hours after ingestion. Plasma concentration increases linearly with increasing dose in the therapeutic range (up to 32 mg). Communication with plasma proteins is high (more than 99%). The volume of distribution of candesartan is 0.13 l / kg. The pharmacokinetic parameters of candesartan do not depend on the age, sex of the patient and the time of eating. Metabolism and excretion. Candesartan is mainly excreted by the kidneys and through the intestines unchanged. Slightly metabolized in the liver (20-30%) with the participation of CYP2C9 isoenzyme with the formation of an inactive derivative. The half-life of candesartan is approximately 9 hours. Does not accumulate.Total clearance is about 0.37 ml / min / kg, while the renal clearance of the drug is 0.19 ml / min / kg. After ingestion of 14C-labeled candesartan cilexetil, 26% of the dose was eliminated by the kidneys in the form of candesartan and 7% in the form of an inactive metabolite, while 56% of the dose is eliminated through the intestine with bile in the form of candesartan and 10% in the form of an inactive metabolite. After a single oral administration over 72 hours, more than 90% of the dose is eliminated. Special patient groups. In elderly patients (over 65 years), the maximum concentration and area under the concentration-time curve (AUC) of candesartan is increased compared with young patients by about 50% and 80%, respectively. However, the response from the blood pressure and possible side effects when using candesartan do not depend on the age of the patients. In patients with mild or moderate renal dysfunction, the maximum concentration and AUC of candesartan are increased by about 50% and 70%, respectively, while the half-life does not change compared with patients with preserved renal function. Pharmacokinetics in patients on hemodialysis is similar to that in patients with severe impaired renal function. In patients with severely impaired renal function, the maximal concentration and AUC increase by 50% and 110%, respectively, and the half-life of the drug is increased by 2 times. In patients with mild or moderate liver failure, the mean AUC of candesartan increases by about 20% in one study and 80% in another study. There is no experience of use in patients with severely impaired liver function.

Inside, 1 time per day, regardless of meal times. Arterial hypertension. The recommended initial and maintenance dose of the drug is 8 mg 1 time / day. If necessary, the dose can be increased to 16 mg 1 time / day. The maximum antihypertensive effect is achieved within 4 weeks of therapy. The maximum daily dose is 32 mg 1 time / day. If, against the background of the maximum daily dose, adequate blood pressure control is not achieved, it is recommended to add thiazide diuretic to therapy. Patients with reduced BCC. In patients at risk of developing arterial hypotension, therapy is recommended to start with an initial dose of 4 mg. Patients with impaired renal function. In patients with mild or moderate renal dysfunction (CC 30-80 ml / min / 1.73 m2 of body surface area), including patients on hemodialysis, the initial dose of the drug is 4 mg. Titrate dose depending on the therapeutic effect. Clinical experience with the drug in patients with severely impaired renal function or end-stage renal failure (CC less than 15 ml / min) is limited. Patients with impaired liver function. The initial daily dose of the drug in patients with mild and moderate liver disease is 4 mg. May increase the dose if necessary.Clinical experience with the drug in patients with severe liver dysfunction and / or cholestasis is absent. Concomitant Therapy The use of the drug Hyposart simultaneously with thiazide diuretics (for example, hydrochlorothiazide) can enhance the antihypertensive effect of the drug. Chronic heart failure. The recommended initial dose of Hyposart is 4 mg 1 time / day. An increase to a maximum daily dose of 32 mg 1 time / day or to the maximum tolerated dose is carried out by doubling the dose at intervals of at least 2 weeks. Special groups of patients Patients of advanced age and patients with impaired renal or liver function do not require correction of the initial dose of the drug. Use in children and adolescents. Safety and efficacy of Hyposart use in children and adolescents under the age of 18 years have not been established. Concomitant Therapy Hyposart can be used simultaneously with other drugs for the treatment of CHF, including ACE inhibitors, beta-blockers, diuretics, cardiac glycosides, or combinations of these drugs.

Hypersensitivity to candesartan or other components of the drug. lactose intolerance , lactase deficiency, glucose-galactose malabsorption syndrome. Pregnancy and breastfeeding period. Children and adolescents under 18 years of age (efficacy and safety have not been established). Severe abnormal liver function and / or cholestasis. Simultaneous use with aliskiren and aliskiren-containing drugs, in patients with diabetes mellitus or impaired renal function (glomerular filtration rate less than 60 ml / min).

Symptoms: marked decrease in blood pressure, dizziness, tachycardia.Isolated cases of drug overdose (up to 672 mg of candesartan cilexetil) have been described, which ended in the recovery of patients without serious consequences. Treatment: in case of a pronounced decrease in blood pressure, to transfer the patient to the “lying down” position on the back, to raise his legs; then it is necessary to carry out measures aimed at increasing the BCC (administration of a 0.9% sodium chloride solution intravenously). If necessary, sympathomimetic drugs may be prescribed. Symptomatic therapy under the control of vital body functions. Hemodialysis is ineffective.

Keep out of the reach of children dream at a temperature not higher than 25C.