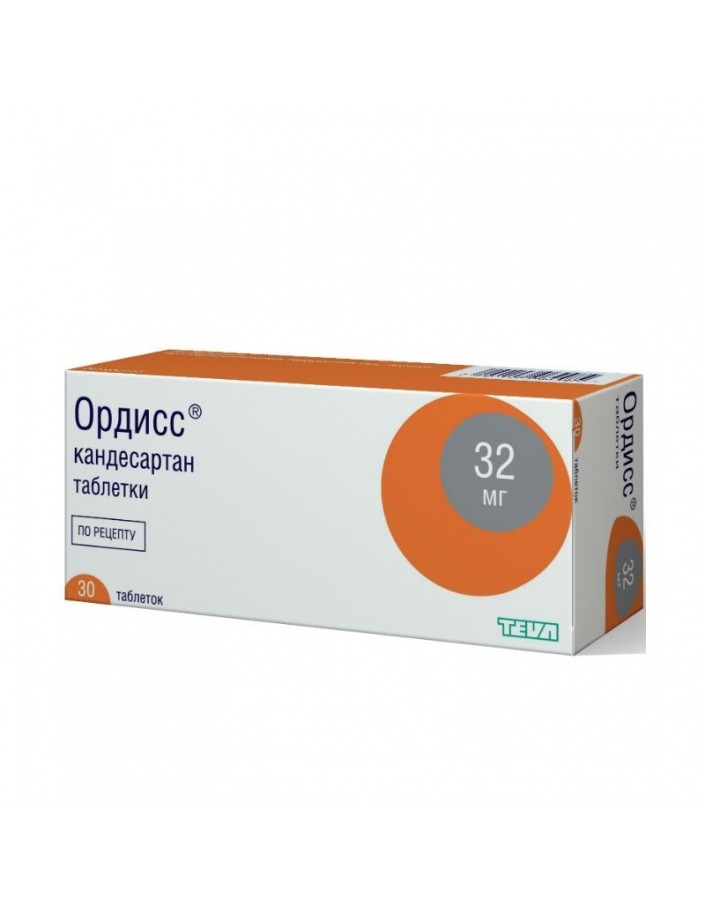 Inside, regardless of the meal, 1 time per day.

The recommended initial dose of Ordiss® is 8 mg 1 time per day. Patients who need a further reduction in blood pressure (BP), it is recommended to increase the dose to 16 mg 1 time per day. The maximum antihypertensive effect is achieved within 4 weeks from the start of treatment. The maximum daily dose of 32 mg / day. If, against the background of treatment with Ordiss ®, adequate blood pressure control is not achieved, it is recommended to add thiazide diuretic to therapy.

In patients of the reduced age There is no need to adjust the initial dose of the drug.

In patients with reduced BCC there is a risk of arterial hypotension, so you should start treatment with the drug with a dose of 4 mg / day (1/2 pill 8 mg).

Clinical experience with the drug in patients with severe renal failure (CC less than 30 ml / min / 1.73 m2 of body surface area) is limited. In these cases, consideration should be given to starting treatment with a dose of 4 mg / day (1/2 pill of 8 mg).

The drug Ordiss® can be used in conjunction with thiazide diuretics (for example, hydrochlorothiazide), which leads to an increase in the hypotensive effect.

The recommended initial dose of Ordiss® is 4 mg 1 time per day (1/2 pill 8 mg). Increasing the dose to 32 mg 1 time per day or to the maximum tolerated dose is carried out by doubling it at intervals of at least 2 weeks.

The drug Ordiss® can be used in conjunction with other drugs used in CHF, for example, with ACE inhibitors, beta-blockers, diuretics, and cardiac glycosides.

Elderly patients, patients with renal insufficiency or abnormal liver function do not need to change the initial dose of the drug.

When using the drug Ordiss® in patients with hypertension and severe renal failure (CC less than 30 ml / min), it is recommended to regularly monitor the content of potassium and the concentration of creatinine in blood serum.Clinical experience with the drug in patients with end-stage renal disease (CC less than 15 ml / min) is limited. When Ordiss® is used in such patients, it is necessary to adjust the dose of Ordiss® under the control of blood pressure.

Renal artery stenosis. Drugs that affect the RAAS (for example, ACE inhibitors) can lead to an increase in serum urea and creatinine concentrations in patients with bilateral renal artery stenosis or arterial stenosis of a single kidney.A similar effect can be expected with the use of angiotensin II receptor antagonists.

Primary hyperaldosteronism. Patients with primary hyperaldosteronism are usually resistant to therapy with antihypertensive drugs that affect the RAAS, therefore, it is not recommended to use Ordiss® in this group of patients. Hyperkalemia. Simultaneous use of Ordiss® with potassium-sparing diuretics,potassium preparations or salt substitutes containing potassium, or other drugs that can increase the content of potassium in the blood serum (eg, heparin), can lead to the development of hyperkalemia in patients with arterial hypertension.

Are common. Patients whose vascular tone and kidney function are primarily dependent on the activity of the RAAS (for example, patients with severe chronic heart failure, kidney disease, including renal artery stenosis) are particularly sensitive to drugs that act on the RAAS. The use of such drugs is accompanied in these patients by acute arterial hypotension, azotemia, oliguria and, less commonly, acute renal failure. The possibility of the development of these effects is not excluded with the use of angiotensin II receptor antagonists. A sharp decrease in blood pressure in patients with ischemic cardiopathy, cerebrovascular diseases of ischemic genesis in the application of any antihypertensive drugs, may lead to the development of myocardial infarction or stroke.