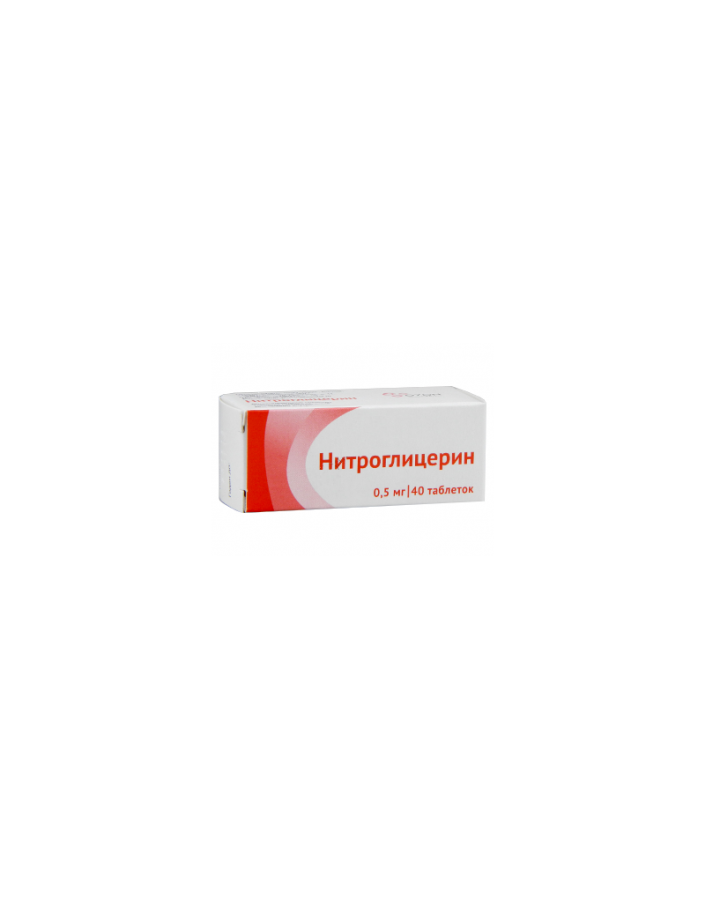 Nitroglycerin is a peripheral vasodilator with a predominant effect on the venous vessels. Antianginal agent. The mechanism of action is associated with the release of the active substance nitric oxide in the smooth muscles of the blood vessels. Nitric oxide causes the activation of guanylate cyclase and increases the level of cGMP, which ultimately leads to the relaxation of smooth muscle. Under the influence of nitroglycerin, arterioles and precapillary sphincters relax to a lesser extent than large arteries and veins. This is partly due to reflex reactions, as well as the less intense formation of nitric oxide from the molecules of the active substance in the walls of arterioles.
The action of nitroglycerin is mainly associated with a decrease in myocardial oxygen demand due to a decrease in preload (dilation of peripheral veins and a decrease in blood flow to the right atrium) and an afterload (decrease in OPS). Contributes to the redistribution of coronary blood flow in the ischemic subendocardial areas of the myocardium.Increases tolerance to physical exertion in patients with coronary artery disease, angina. In heart failure, it promotes myocardial discharge, mainly due to a decrease in preload. Reduces pressure in the pulmonary circulation.

Sublingual: pills - 0.15–0.5 mg per dose, if necessary, again after 5 minutes. In the case of the development of acute left ventricular insufficiency, it is possible to use 4 or more doses over a short period.

In the acute period of myocardial infarction and with the development of acute heart failure, it is prescribed under strict hemodynamic control.With caution used in aortic and mitral stenosis, in patients with hypovolemia and low syst. HELL (less than 90 mm Hg). In hypertrophic cardiomyopathy, it can cause an increase in and / or weighting of strokes. With long-term uncontrolled intake of nitroglycerin, the appointment of high doses to patients with liver failure and children increases the risk of methemoglobinemia, manifested by cyanosis and the appearance of blood brown tint. In cases of methemoglobinemia, the drug should be urgently canceled and the antidote methylthioninium chloride (methylene blue) should be introduced. If necessary, the further use of nitrates is required to control the content of methemoglobin in the blood or the replacement of nitrates for sydnonimine.
To reduce the risk of side effects, care must be taken while taking it with drugs that have pronounced hypotensive and vasodilating properties; It is not recommended to take the drug on the background of alcohol consumption, in rooms with high ambient temperatures (bath, sauna, hot shower), as well as taking several pills at the same time or sequentially in a short period of time at the first dose.
You can not chew pills and capsules in order to stop an attack of angina, because an excess amount of the drug from the destroyed microcapsules through the oral mucosa can enter the systemic circulation.When a headache and other unpleasant sensations occur in the head area, the improvement is achieved by prescribing Validol or menthol drops sublingually. Often, only the first doses are poorly tolerated, then the side effects subside.
With simultaneous use with Heparin, it is necessary to increase the dose of heparin and strictly control the partially activated thromboplastin time. It is used with caution in elderly patients. It is not recommended to assign buccal forms to patients with aphthous stomatitis, gingivitis, periodontal diseases and the root system of the teeth, removable upper dentures.
Uncontrolled reception can lead to the development of tolerance, expressed in reducing the duration and severity of the effect with regular use or the need to increase the dose to achieve the same effect. With regular use of prolonged forms of nitroglycerin, especially patches and ointments, the drug is almost always present in the blood, so the risk of tolerance increases significantly. To prevent the onset of resistance, intermittent administration is necessary during the day, or co-administration of Calcium antagonists, ACE inhibitors, or diuretics.

In a dark, cool place, away from fire.