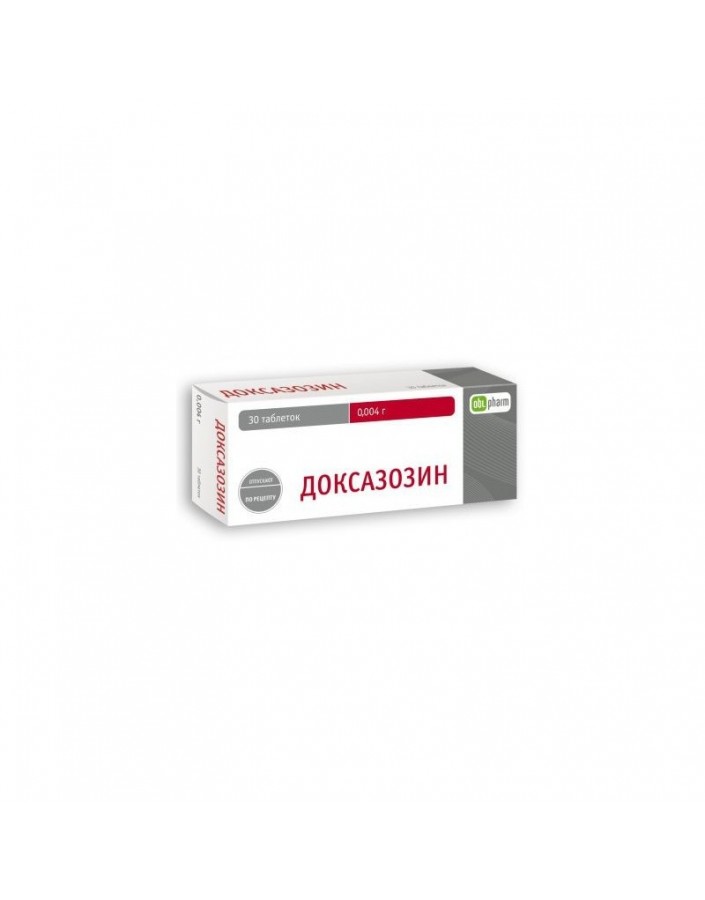 Description: pills of white or white with a creamy shade of color, round, biconvex shape.

Reduces the pre-and afterload on the heart. After a single dose, a decrease in blood pressure develops gradually, the maximum decrease is observed after 2-6 hours and lasts for 24 hours.

Reduces the risk of coronary heart disease (CHD). Taking the drug in patients with normal blood pressure is not accompanied by a decrease in blood pressure. With prolonged use of doxazosin, patients develop tolerance.

During treatment with doxazosin, a decrease in plasma concentration of triglycerides, total cholesterol, is observed. At the same time, there is some (by 4–13%) increase in the coefficient of high-density lipoprotein / total cholesterol.

With prolonged treatment with doxazosin, there is regression of left ventricular (LV) hypertrophy, suppression of platelet aggregation and an increase in the content of active plasminogen in the tissues.

It has an effect in 66-71% of patients, the onset of action after 1-2 weeks of treatment, the maximum after 14 weeks, the effect lasts for a long time.

Pharmacokinetics: After ingestion in therapeutic doses, doxazosin is well absorbed, absorption - 80-90% (simultaneous ingestion slows down the absorption for 1 hour), the time to reach the maximum plasma concentration (TCmax) is 3 hours, with evening reception of the vehiclemax lengthened to 5 hours.

Bioavailability - 60-70%. Communication with plasma proteins is about 98%. Removal from blood plasma occurs in 2 phases, with a final half-life (T½) - 19-22 hours, which allows you to prescribe the drug 1 time per day.

Extensively metabolized in the liver by odemethylation and hydroxylation. In patients with impaired liver function, as well as when taking drugs that can change the "liver" metabolism, the process of biotransformation of the drug may be disrupted. The main elimination is through the intestines (63-65% in the form of metabolites and about 5% in unchanged form). About 10% is excreted by the kidneys. A study of the pharmacokinetics of doxazosin in elderly patients and patients with kidney disease did not reveal significant pharmacokinetic differences.

· Benign prostatic hyperplasia: both in the presence of arterial hypertension and in the normal level of arterial pressure.

Contraindications: Hypersensitivity to doxazosin and other quinazoline derivatives (prazosin, terazosin) or to other components of the drug;

Patients with BPH and a concomitant violation of the outflow of urine from the upper urinary tract, chronic urinary tract infections, stones in the bladder;

Age up to 18 years (efficacy and safety have not been established);

As monotherapy in patients with either an overflowing bladder or anuria, with or without a combination of progressive renal failure.

With caution: Pulmonary edema due to aortic or mitral stenosis;

The simultaneous use of phosphodiesterase-5 inhibitors (sildenafil, vardenafil, trandalafil);

Syndrome of intraoperative instability of the iris of the eye (narrow pupil syndrome);

Use during pregnancy and during breastfeeding: Pregnant women can take the drug only when the benefit to the mother outweighs the potential risk to the fetus / child. There is no data on the penetration of doxazosin into breast milk, therefore it is recommended that nursing mothers stop feeding during the period of treatment with the drug Doxazosin.

Dosage and administration: Inside, once a day (in the morning or in the evening), regardless of the meal, not chewing and drinking plenty of water.

Patients with hepatic impairment require smaller doses due to slow metabolism of the drug.

BPH: The initial dose is 1 mg of doxazosin per day. The patient should take the first dose in the evening before bedtime. Depending on urodynamic parameters and the presence of symptoms of BPH, the dose can be gradually increased at intervals of 1–2 weeks to 2 mg, 4 mg and 8 mg per day. The recommended maintenance dose of 2 to 4 mg per day. The maximum daily dose is 8 mg.

AH: The initial dose of doxazosin is 1 mg per day before bedtime. After taking the first dose, the patient should be in bed for 6-8 hours. This is required in connection with the possibility of the development of the “first dose” phenomenon, especially pronounced against the background of previous diuretic intake. With a lack of therapeutic effect of the drug, the daily dose can be increased to 2 mg in 1-2 weeks.In the next every 1-2 weeks, the dose can be increased by 2 mg. In the vast majority of patients, the optimal therapeutic effect is achieved at a dose of 8 mg per day. The maximum daily dose is 16 mg.

Side effect: The frequency of adverse reactions with the use of the drug Doxazosin is given below in accordance with the generally accepted classification:

From the side of the cardiovascular system: often - hypertension (including orthostatic), palpitations, tachycardia; infrequently - angina, myocardial infarction; very rarely - bradycardia, rhythm disturbances, "flushes" of blood to the skin of the face, peripheral edema.

From the side of blood-forming organs: leukopenia, thrombocytopenia.

From the musculoskeletal system: often - back pain, myalgia; not often - arthralgia; rarely - cramps, weakness in the muscles.

Treatment: gastric lavage, taking activated charcoal. The patient must be laid on his back and lift his legs. In case of a pronounced decrease in blood pressure, anti-shock measures are taken - they fill the circulating blood volume, and, if necessary, prescribe vasopressors.

The drug does not affect the degree of binding to plasma proteins of Digoxin , phenytoin.

With simultaneous use of enzymes of microsomal oxidation in the liver (ethanol, barbiturates, phenylbutazone, tricyclic antidepressants) with inducers, the effectiveness of doxazosin may be increased, with inhibitors (cimetidine) - reduction. Nonsteroidal anti-inflammatory drugs (NSAIDs), especially Indomethacin , estrogens (fluid retention) and sympathomimetic drugs can reduce the hypotensive effect of doxazosin.

Eliminating the alpha-adrenostimulating effects of epinephrine can lead to tachycardia and arterial hypotension.

Concomitant use with selective phosphodiesterase-5 inhibitors (sildenafil, tadalafil, vardenafil) can lead to the development of arterial hypotension.

Special instructions: Particular caution should be exercised when using the drug Doxazosin in patients with impaired liver function, especially in cases where drugs are used at the same time that can change the “liver” metabolism (for example, ethanol, barbiturates, phenylbutazone,tricyclic antidepressants, cimetidine). In cases of deterioration of the functional status of the liver, the drug is immediately canceled.

In order to prevent orthostatic reactions, patients should avoid unexpected and abrupt changes in body position (moving from the "lying" to the "standing" position).

Care should be taken when taking phosphodiesterase-5 and doxazosin inhibitors at the same time. possible development of arterial hypotension. To reduce the risk of arterial hypotension (including orthostatic), it is necessary to begin treatment with phosphodiesterase-5 inhibitors only if the patient has adapted to doxazosin therapy, and besides, between the administration of drugs, the 6-hour interval from doxazosin administration should be observed.

In case of surgery for cataract on the background of the drug intake, the syndrome of intraoperative instability of the iris of the eye (narrow pupil syndrome) may develop, which must be taken into account by the surgeon for the preoperative preparation of the patient and during the operation.

Taking alcohol can increase the undesirable reactions of doxazosin.

The effect of the “first dose” of the drug is especially pronounced against the background of previous diuretic therapy and a sodium-restricted diet.

Before starting therapy, it is necessary to exclude a cancerous degeneration of the prostate gland.

Influence on ability to drive vehicles and other mechanisms

In the case of taking the drug Doxazosin, caution should be exercised when driving or when performing work that requires high concentration of attention and speed of psychomotor reactions.

Storage conditions: In a dry dark place at a temperature of no higher than 25 aboutC. Keep out of the reach of children.