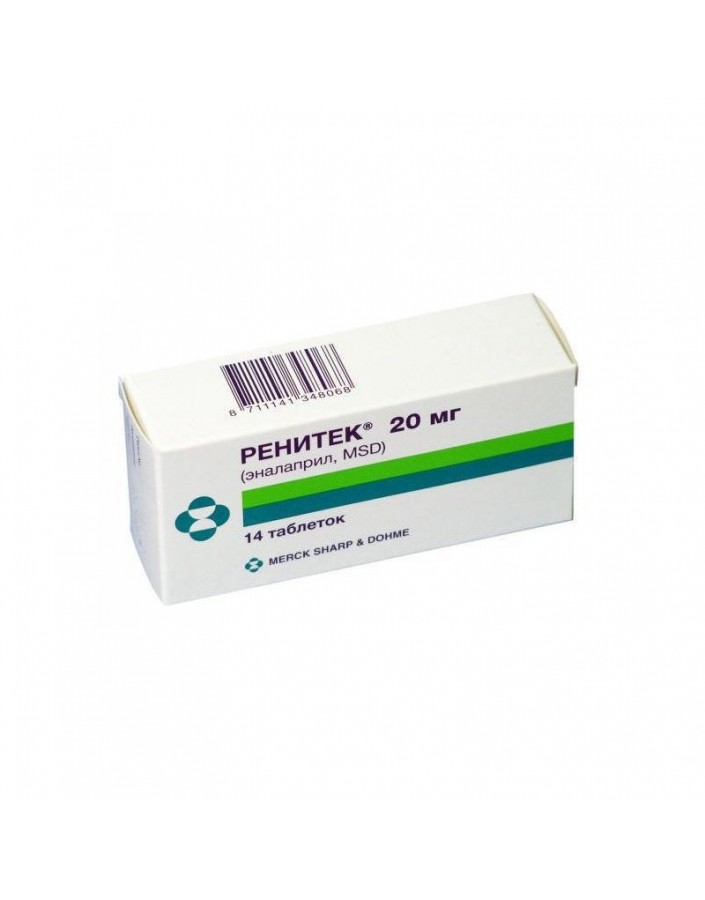 Enalapril maleate - the active ingredient of Renitec - is a salt of maleic acid and enalapril - a derivative of L-alanine and L-proline. Pharmacological activity has a metabolite of enalapril - enalaprilat - a highly specific, long-acting ACE inhibitor.
Renitek was evaluated in a multicenter, double-blind, placebo study that included 6797 patients: 2569 patients with chronic heart failure (stage II and III) and 4228 patients with asymptomatic left ventricular dysfunction. Renithek reduced the incidence of myocardial infarction and reduced the number of hospitalizations for unstable angina in patients with left ventricular dysfunction.
In addition, Renitec significantly slowed the progression of clinically severe heart failure and reduced the number of hospitalizations for heart failure. Renitek in combination with traditional therapy significantly reduced overall mortality and the number of hospitalizations for heart failure, as well as improved the functional class of patients.
In a study that included 253 patients with severe chronic heart failure (stage IV), Renitec significantly improved the general condition of patients and significantly reduced mortality.

Renitec can be used as monotherapy at the beginning of treatment or as part of combination therapy with other antihypertensive drugs, especially diuretics.
The drug can be taken regardless of the meal.
In case of arterial hypertension, depending on its degree, the initial dose is 10–20 mg 1 time / day. With mild hypertension, the recommended initial dose is 10 mg / day, with moderate and severe - 20 mg / day. Maintenance dose - 20 mg 1 time / day. The dose should be selected individually for each patient. The maximum daily dose is 40 mg.
Patients with renovascular hypertension may be particularly sensitive to the action of ACE inhibitors, so therapy should be started with a low initial dose, for example, with 5 mg or less. Then the dose is selected in accordance with the needs of the patient. In most patients, the effect is manifested when taking 20 mg of the drug daily. The maximum daily dose is 40 mg.
Caution should be exercised in the appointment of Renetec patients who receive diuretic treatment, because in such patients, in the presence of a deficiency of liquid or sodium, after the first dose of Renitec, arterial hypotension may develop. Treatment with diuretic should be stopped 2-3 days before the start of the use of Renitec. If this is not possible, then Renitec therapy begins with a dose of 5 mg in order to determine the primary effect of the drug on the level of blood pressure. Next, the dose of the drug is set in accordance with the needs of the patient.
With chronic heart failure or asymptomatic dysfunction of the left ventricle, the initial dose of the drug is 2.5 mg. Renitec should be prescribed under close medical supervision in order to establish the primary effect of the drug on blood pressure.If there is no effect or after appropriate correction of symptomatic hypotension resulting from treatment with Renitec, the dose should be gradually increased to an average maintenance dose of 20 mg / day, which is prescribed in 1 or 2 doses, depending on what the patient tolerates. Selection of the dose can be carried out within 2-4 weeks or in a shorter time, if there are residual signs and symptoms of heart failure.
In patients with impaired renal function, the interval between doses of the drug should be increased or the dose should be reduced. Dosing regimen corrected depending on the values ​​of creatinine clearance. When QC 80-30 ml / min, the dose of the drug is 5-10 mg / day; 30-10 ml / min - 2.5-5 mg / day; less than 10 ml / min - 2.5 mg on dialysis days. Correction of the dosing regimen in the days when dialysis is not performed should be carried out depending on the level of blood pressure.

Angioedema associated with taking an ACE inhibitor in history;
Hypersensitivity to enalapril.
Pregnancy and lactation

In clinical studies, an increase in life expectancy in patients receiving the drug was established.
Both before and during treatment with Renitec, systematic monitoring of blood pressure and kidney function is necessary, since there were reports of the development of arterial hypotension and (much less often) of renal failure as a result of taking the drug. The development of arterial hypotension after receiving the initial dose of Renitec does not mean that it will continue with long-term treatment and is not a contraindication to treatment with the drug, which can be continued after filling up the volume of fluid and normalizing blood pressure.
Symptomatic hypotension was rarely observed in patients with uncomplicated arterial hypertension, more often it develops on the background of hypovolemia resulting from diuretic therapy, restriction of salt intake, as well as diarrhea or vomiting.
Symptomatic hypotension was also observed in patients with heart failure, with or without renal failure. Hypotension occurs more frequently in patients with the most severe forms of heart failure when using "loop" diuretics in high doses, in patients with hyponatremia or impaired renal function. In such patients, treatment with Renitec should be initiated under medical supervision, which should be especially careful when changing the dose of Renitec and / or diuretic. Similarly, patients with coronary artery disease should be monitored, as well as vascular diseases of the brain, in which a sharp decrease in blood pressure can lead to myocardial infarction or stroke.
With the development of arterial hypotension, the patient should be given a horizontal position with raised legs and, if necessary, in / in a physiological solution.
In some patients with heart failure and normal or reduced blood pressure, Renitec may cause an additional decrease in blood pressure. Such a reaction to taking the drug can be expected and should not be regarded as a reason for stopping the treatment. In cases where hypotension becomes stubborn, the dose should be reduced and / or discontinued diuretic and / or Renitec treatment.
In some patients, hypotension that develops after the start of treatment with Renitec can lead to a deterioration in renal function.In some cases, the development of acute renal failure has been reported, usually of a reversible nature.
In some patients with bilateral stenosis of the renal arteries or stenosis of the artery of a single kidney, an increase in blood urea and serum creatinine was observed. The changes were reversible and the rates returned to normal after discontinuation of treatment. This pattern of change is most likely in patients with renal insufficiency.
In some patients in whom no kidney disease was found before the start of treatment, Renitec, in combination with diuretics, caused a slight increase in blood urea and creatinine in serum. In such cases, it may be necessary to reduce the dose or cancel diuretic and / or Renitec.
When prescribing ACE inhibitors, including Renitec, rare cases of angioedema of the face, extremities, lips, tongue, glottis and / or larynx, occurring during different periods of treatment, are described. In such cases, Renitec should be discontinued immediately and patient monitoring should be established to ensure that the symptoms disappear completely. If the swelling is limited to the face and lips, usually special treatment is not required, although antihistamines have a positive effect, improving the patient's condition. In cases where the edema is localized in the area of ​​the tongue, glottis or larynx and can cause obstruction of the respiratory tract, treatment with injection of epinephrine 1: 1000 (0.3-0.5 ml) should be quickly started.
In patients with a history of angioedema, not associated with the use of ACE inhibitors, there is an increased risk of its occurrence when treated with Renitec.
In rare cases, patients receiving ACE inhibitors developed severe anaphylactoid reactions during allergy hyposensitization from hymenoptera venom. Such reactions can be avoided if, prior to the onset of desensitization, you temporarily stop taking Renitec.
Patients who were on dialysis with the use of high throughput polyacrylonitrol AN69 membranes and who simultaneously received an ACE inhibitor sometimes develop anaphylactoid reactions. Therefore, the use of dialysis membranes AN69 in combination with ACE inhibitors is not recommended.
There are reports of the occurrence of cough in the treatment of ACE inhibitors. Usually the cough is unproductive, persistent, and stops after discontinuation of the drug.
During major surgeries or during anesthesia using compounds that cause arterial hypotension, enalapril blocks the formation of angiotensin II secondary to compensatory renin release. If this develops arterial hypotension, which can be explained by this mechanism, then it should be adjusted by increasing the BCC.
When treatment Renitec should monitor the content of potassium in the serum.
Use in pediatrics
The safety and efficacy of Renitec in children have not been established.

Store at temperatures below 25 ° C, out of reach of children.