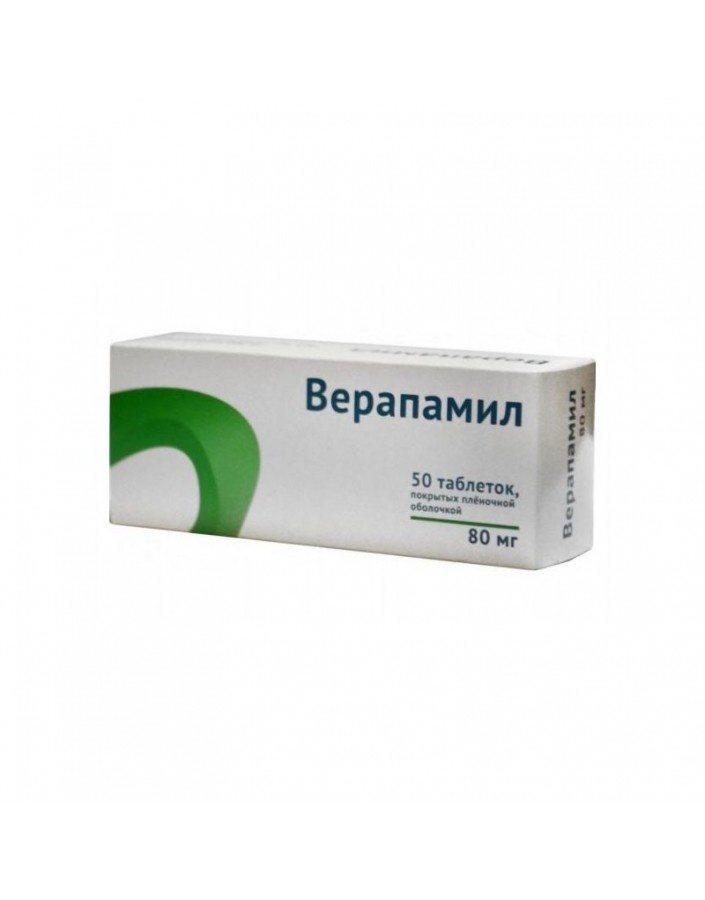 Selective Calcium channel blocker class I. It has antiarrhythmic, antianginal and hypotensive effects. Reduces the need for myocardium in oxygen by reducing myocardial contractility and reducing heart rate. It causes dilation of the coronary arteries and an increase in coronary blood flow. Reduces the tone of the smooth muscles of peripheral arteries and round neck. It has antiarrhythmic effect in supraventricular arrhythmias.

When ingestion is absorbed more than 90% of the dose. Metabolized by first passing through the liver. Protein binding - 90%. The main metabolite is norverapamil, which has a less pronounced hypotensive activity than unchanged verapamil.
The half-life period when taking a single dose is 2.8-7.4 h, while taking repeated doses - 4.5-12 h (due to the saturation of the enzyme systems of the liver and increasing the concentration of verapamil in the blood plasma). After i / v administration, the early half-life is about 4 minutes, the final is 2-5 hours.
Excreted mainly by the kidneys and 9-16% through the intestines.

Cardiovascular: possible redness of the face. When using large doses of verapamil, especially in predisposed patients, severe bradycardia, AV blockade, arterial hypotension, and the appearance of heart failure symptoms are possible. With rapid on / in the introduction in isolated cases - complete transverse heart block, asystole, collapse.
Gastrointestinal: nausea, constipation; in some cases, a transient increase in the activity of hepatic transaminases in the blood plasma.
From the side of the central nervous system: dizziness, headache; rarely - nervousness, lethargy, fatigue.
Allergic reactions: possible skin rash, itching.

The use of verapamil during pregnancy is possible only when the expected benefit to the mother outweighs the potential risk to the fetus.
If necessary, use during lactation should be aware that verapamil can be excreted in breast milk.

Verapamil is used with caution in patients with severely impaired liver function, in acute myocardial infarction, AV grade I blockade.
If necessary, combination therapy of angina and arterial hypertension with verapamil and beta-blockers is possible. However, it should be avoided in / in the introduction of beta-blockers against the background of the use of verapamil.
Influence on ability to drive motor transport and control mechanisms
After taking verapamil, individual reactions (drowsiness, dizziness) are possible, affecting the patient's ability to perform work that requires increased attention and quickness of psychomotor reactions.
Verapamil in the form of tablets, capsules, pills and solution for injection is included in the List of VED.

With simultaneous use of verapamil and beta-blockers, antiarrhythmic drugs, inhalation anesthetics, the risk of bradycardia, AV blockade, severe arterial hypotension, and heart failure is increased due to the mutual inhibitory effect on the sinoatrial node automatism and AV myocardial contractility and conductivity.
With simultaneous use of verapamil with other antihypertensive drugs (vasodilators, thiazide diuretics and ACE inhibitors), the hypotensive action is mutually reinforced. The antianginal effect of verapamil is enhanced while being used with nitrates. Cimetidine enhances the effects of verapamil.
Verapamil enhances the effect of Carbamazepine; reduces the effects of rifampicin and phenobarbital.
With simultaneous use of verapamil and Digoxin, an increase in the concentration of digoxin in the blood plasma was observed. On the background of long-term use of lithium drugs, verapamil can reduce the concentration of lithium in the blood plasma.