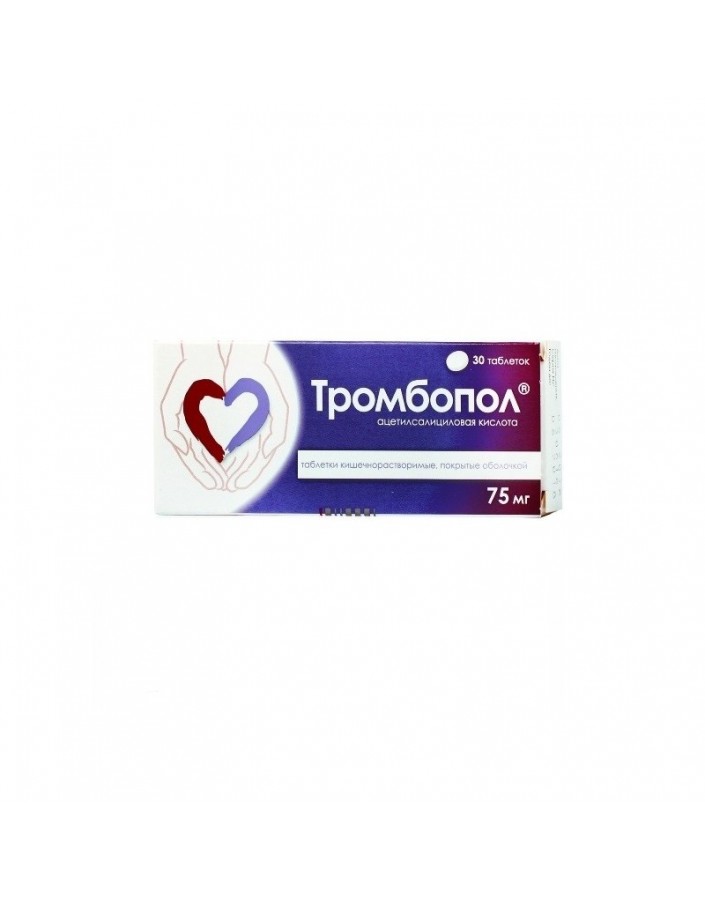 In the blister of 10 tablets. In packing 3 blisters.

Trombopol - NSAIDs, antiplatelet. The basis of the mechanism of action of acetylsalicylic acid is irreversible inhibition of COX-1, as a result of which blockade of the synthesis of thromboxane A2 occurs and the suppression of platelet aggregation. Antiplatelet effect develops even after the use of the drug in small doses and persists for 7 days after a single dose. Due to these properties, acetylsalicylic acid is used for the prevention and treatment of myocardial infarction, coronary artery disease, complications of varicose veins. Acetylsalicylic acid also has anti-inflammatory, analgesic, antipyretic effects.Thrombopol pills have an enteric coating, due to which the active substance dissolves and secrete in a more alkaline environment of the duodenum, reducing the irritant effect of acetylsalicylic acid on the gastric mucosa.

- Gastrointestinal bleeding.
- Hemorrhagic diathesis.
- Bronchial asthma induced by salicylates and NSAIDs.
- A combination of bronchial asthma, recurrent nasal polyposis and paranasal sinuses and intolerance to acetylsalicylic acid.
- Combined use with Methotrexate at a dose of 15 mg per week or more.
- I and III trimesters of pregnancy.
- Lactation period (breastfeeding).
- Age up to 18 years.
- Hypersensitivity to the drug.
- Hypersensitivity to other NSAIDs.
With caution should use the drug for:
- Gout.
- Hyperuricemia.
- Peptic ulcer of the stomach and duodenum or gastrointestinal bleeding (in history).
- Renal or hepatic failure.
- Bronchial asthma.
- Chronic respiratory diseases.
- Hay fever.
- Polyposis of the nose.
- Drug allergies.
- At the same time taking methotrexate in a dose of less than 15 mg / week.
- Concomitant anticoagulant therapy.
- In the II trimester of pregnancy.

The use of the drug Trombopol in the I and III trimesters of pregnancy and during lactation is contraindicated. The use of salicylates in the first trimester of pregnancy leads to the development of splitting of the upper palate, heart disease; in trimester III, it causes inhibition of labor, premature closure of the ductus arteriosus in the fetus, increased bleeding in the mother and fetus, and the administration immediately before birth can cause intracranial hemorrhages, especially in premature babies. In the second trimester of pregnancy, salicylates can be prescribed only after a rigorous assessment of the expected benefits of therapy for the mother and the potential risk to the fetus. Salicylates and their metabolites in small quantities are excreted in breast milk.Accidental intake of salicylates during lactation is not accompanied by the development of adverse reactions in the child and does not require discontinuation of breastfeeding. However, with prolonged use of the drug or the appointment of a high dose of breastfeeding should be stopped immediately.

Acetylsalicylic acid can provoke bronchospasm, as well as cause attacks of asthma and other hypersensitivity reactions. Risk factors are a history of bronchial asthma, hay fever, nasal polyposis, chronic diseases of the respiratory system, as well as allergic reactions to other drugs (eg, skin reactions, itching, urticaria). Acetylsalicylic acid can cause bleeding of varying severity during and after surgical interventions. The drug should be stopped 5-7 days before the intended operation. Acetylsalicylic acid in low doses can trigger the development of gout in predisposed individuals (with reduced excretion of uric acid). Acetylsalicylic acid in high doses has a hypoglycemic effect, which must be borne in mind when prescribing it to patients with diabetes mellitus receiving hypoglycemic agents.
It should be borne in mind that the combined appointment of GCS and salicylates decreases the concentration of salicylates in the blood, and after the removal of the GCS overdose of salicylates is possible. The combination of Trombopol with Ibuprofen is not recommended, since the latter reduces the effectiveness of acetylsalicylic acid.Excess doses of acetylsalicylic acid are associated with the risk of gastrointestinal bleeding. The combination of acetylsalicylic acid and ethanol increases the risk of damage to the gastrointestinal mucosa and lengthening the bleeding time.
Overdose is especially dangerous in older people. Patients older than 65 years due to the deterioration of renal function and the more frequent occurrence of adverse reactions from the digestive system should be given in smaller doses.
Influence on ability to drive motor transport and control mechanisms.
Data on the negative effects of the drug Trombopol on the ability to drive vehicles or to work with the mechanisms is not available.

The combination of acetylsalicylic acid with methotrexate is accompanied by an increased incidence of side effects from the blood-forming organs.
With simultaneous use of acetylsalicylic acid enhances the action of methotrexate by reducing renal clearance and pushing it out of communication with proteins; Heparin and indirect anticoagulants due to dysfunction of platelets and the displacement of indirect anticoagulants from binding to proteins; thrombolytic drugs and platelet aggregation inhibitors (ticlopidine); Digoxin, due to a decrease in its renal excretion; hypoglycemic agents (insulin and sulfonylurea derivatives) due to the hypoglycemic properties of acetylsalicylic acid itself in high doses and forcing out sulfonylurea derivatives from their association with proteins; valproic acid due to the displacement of its connection with proteins; NSAIDs; sulfonamides (includingco-trimoxazole); barbiturates; lithium salts. An additive effect is observed while taking acetylsalicylic acid with alcohol. Acetylsalicylic acid reduces the action of anti-arthritic drugs that increase the excretion of uric acid (probenecid, sulfinpyrazone, benzbromarone), due to competitive tubular elimination of uric acid; antihypertensive drugs, including ACE inhibitors; aldosterone antagonists (eg, spironolactone); "loop" diuretics (for example, furosemide). Enhancing the elimination of salicylates, GCS for systemic use weakens their action.
The combination of acetylsalicylic acid with anticoagulants, thrombolytic drugs and platelet aggregation inhibitors is associated with an increased risk of bleeding.

Symptoms: The first symptoms are nausea, vomiting, tinnitus, and rapid breathing. Hearing loss, visual disturbances, headaches, motor agitation, drowsiness, convulsions, hyperthermia are also possible. When severe intoxication may develop disorders of acid-base and water-electrolyte balance (metabolic acidosis and dehydration). Mild to moderate intoxication symptoms develop after the use of acetylsalicylic acid in a dose of 150-300 mg / kg. Symptoms of severe overdose develop at a dose of 300-500 mg / kg. The potentially lethal dose of acetylsalicylic acid is more than 500 mg / kg.
Treatment: cause vomiting and flush the stomach (in order to reduce the absorption of the drug). Such actions give an effect within 3-4 hours after taking the drug, and in the case of taking it in an excessive dose - up to 10 hours. children - 30-60 g); it is necessary to carefully observe the violation of water and electrolyte balance and to fill it. In order to accelerate the excretion of acetylsalicylic acid by the kidneys and in the treatment of acidosis, sodium bicarbonate must be in / in. It is necessary to maintain a pH in the range of 7.0-7.5. For very severe intoxication, hemodialysis or peritoneal dialysis is necessary. In connection with the possibility of developing respiratory acidosis, it is prohibited to take drugs that depress the central nervous system, for example, barbiturates. Patients with impaired breathing need to ensure airway and oxygen. If necessary, perform intratracheal intubation and provide for mechanical ventilation. The specific antidote is absent.