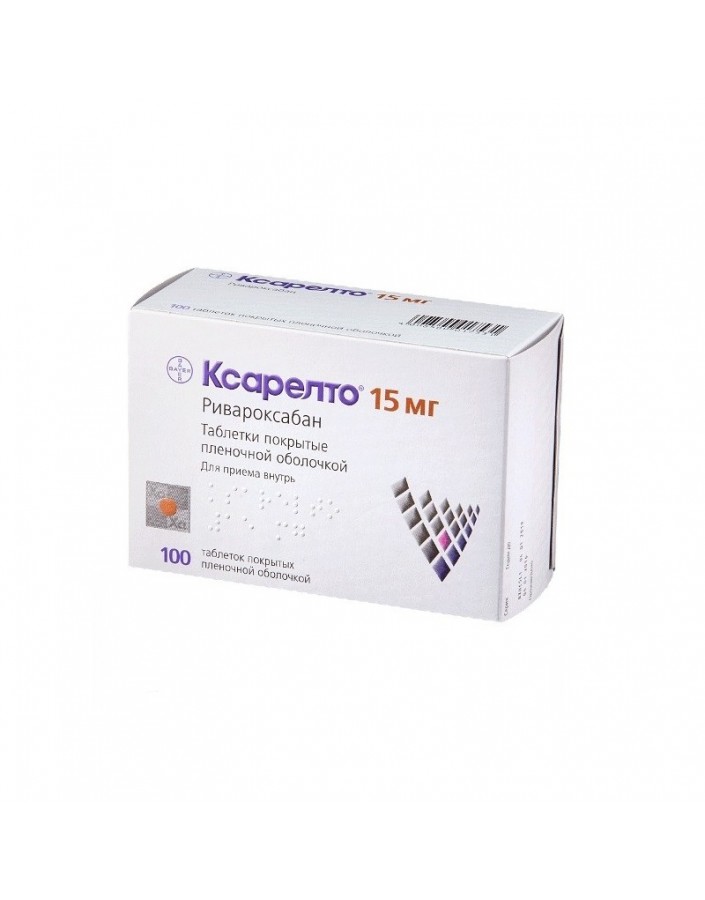 Xarelto is a direct acting anticoagulant. Rivaroxaban is a highly selective direct inhibitor of factor Xa, with high bioavailability when administered. Activation of factor X to form factor Xa through the internal and external coagulation paths plays a central role in the coagulation cascade. In humans, dose-dependent inhibition of factor Xa was observed. Rivaroxaban has a dose-dependent effect on prothrombin time and closely correlates with plasma concentrations (r = 0/98) if the Neoplastin kit is used for analysis. When using other reagents, the results will differ. The prothrombin time should be measured in seconds, since the MHO is calibrated and certified only for coumarin derivatives and cannot be used for other anticoagulants. In patients undergoing large orthopedic surgeries, the 5/95 percentile for the prothrombin time (Neoplastin) 2-4 hours after taking the pill (that is, at the maximum effect) varies from 13 to 25 seconds. Also, rivaroxaban increases the APTT dose-dependently and the result of HepTest; however, these parameters are not recommended for evaluating the pharmacodynamic effects of rivaroxaban.Rivaroxaban also affects the activity of the anti-Xa factor, but there are no standards for calibration. During treatment with rivaroxaban, monitoring of blood clotting parameters is not required. In healthy men and women older than 50 years, the prolongation of the QT interval under the influence of rivaroxaban was not observed.

- liver diseases that occur with coagulopathy, which causes a clinically significant risk of bleeding;

- children and adolescents under 18 years of age (efficacy and safety for patients in this age group have not been established);

- Hypersensitivity to rivaroxaban or any excipients contained in the tablet.

Hereditary intolerance to lactose or galactose (for example, caused by lactase deficiency or glucose-galactose malabsorption), since lactose is a part of this drug.

Pregnancy
Data on the use of rivaroxaban in pregnant women are not available.
The data obtained in experimental animals showed a pronounced toxicity of rivaroxaban for the maternal organism, associated with the pharmacological action of the drug (for example, complications in the form of hemorrhages) and leading to reproductive toxicity.
Because of the possible risk of bleeding and the ability to cross the placenta, rivaroxaban is contraindicated in pregnancy.
Women with preserved reproductive ability should use effective methods of contraception during treatment with rivaroxaban.
Lactation
Data on the use of rivaroxaban for the treatment of women during lactation are not available. The data obtained on experimental animals show that rivaroxaban is excreted in breast milk. Rivaroxaban can be used only after the cancellation of breastfeeding.

The drug should be taken orally, regardless of the meal.

In order to prevent VTE during large orthopedic operations, it is recommended to prescribe 1 pill of 10 mg 1 time per day. Duration of treatment:

The initial dose should be taken 6-10 hours after surgery, provided hemostasis is achieved.

If a patient misses a dose, rivaroxaban should be taken immediately and the next day, continue with treatment, 1 pill per day, as before.

The safety of rivaroxaban at a dose of 10 mg was evaluated in four phase III studies involving 6097 patients who underwent major orthopedic surgery on the lower limbs (total knee or hip replacement) who received treatment for up to 39 days.

Adverse reactions are classified according to the frequency of occurrence and organ systems, and should be interpreted taking into account the surgical situation.

Given the mechanism of action, the use of rivaroxaban may be accompanied by an increased risk of latent or apparent bleeding from any organs and tissues, which can lead to post-hemorrhagic anemia. Signs, symptoms, and severity (including possible death) vary depending on the location, severity or duration of bleeding, and / or anemia. The risk of bleeding may increase in patients with uncontrolled arterial hypertension and / or when combined with drugs that affect hemostasis.Hemorrhagic complications can manifest weakness, pallor, dizziness, headache, shortness of breath, as well as an increase in limb volume or shock for other unexplained reasons. In some cases, symptoms of myocardial ischemia, such as chest pain and angina, may develop as a result of anemia. Therefore, when assessing the condition of a patient receiving anticoagulants, the possibility of hemorrhage should be considered.

The summarized data on the incidence of adverse reactions recorded for Xarelto® is shown in the table below. In frequency groups, unwanted effects are presented in order of decreasing severity. Depending on the frequency of occurrence, frequent (≥ 1/100 and <1/10), infrequent (≥ 1/1000 and <1/100) and rare undesirable reactions (≥ 1/10 000 and <1/1000) were identified. Undesirable reactions that were detected only at the stage of post-marketing observational studies or for which it was impossible to estimate the frequency are designated as “frequency unknown”.

Listed below are all adverse reactions occurring during the treatment period in patients participating in phase III clinical trials.

On the part of the hematopoietic system: infrequently - anemia (including appropriate laboratory parameters), thrombocythemia (including elevated platelet count).

From the side of the central nervous system: infrequently - dizziness, headache; rarely, short-term loss of consciousness (including syncopal states).

From the musculoskeletal system: infrequently - pain in the limbs.

On the part of the organism as a whole: often - fever, peripheral edema; infrequently, local edema, deterioration of general well-being (including weakness, asthenia); rarely - feeling unwell (including discomfort).

Other: often - hemorrhages after the procedures (including postoperative anemia and bleeding from a wound); infrequently - discharge from the wound.

In other clinical studies of rivaroxaban, isolated cases of hemorrhage in the adrenal glands and conjunctiva, and also bleeding from gastrointestinal ulcers with a fatal outcome have been described; in rare cases, jaundice and hypersensitivity were observed; infrequently - hemoptysis. Single intracranial hemorrhages have been described (especially in patients with arterial hypertension and / or taking concomitant medications that affect hemostasis / for example, NSAIDs , antiplatelet agents or other antithrombotic agents), which in some cases can be potentially life-threatening.

According to other clinical studies reported the occurrence of vascular pseudoaneurysm after percutaneous interventions.

According to other clinical studies and post-marketing observational studies, known complications of bleeding, such as compartment syndrome, are reported. In addition, the development of acute renal failure and renal failure, which resulted from bleeding, the intensity of which was sufficient to cause hypoperfusion, was recorded.

The use of rivaroxaban has not been studied in clinical trials for surgical interventions undertaken with hip fractures.

If an unexplained decrease in hemoglobin or blood pressure is necessary to look for a source of bleeding.

During treatment with rivaroxaban, no prolongation of the QT interval was observed.

When performing spinal puncture and epidural / spinal anesthesia for patients receiving platelet aggregation inhibitors to prevent thromboembolic complications, there is a risk of developing epidural or spinal hematoma, which can lead to prolonged paralysis. The risk of these events is further increased with the use of permanent catheters or the concomitant use of drugs that affect hemostasis. Injury when performing epidural or spinal puncture or re-puncture may also increase the risk. Patients should be supervised to identify signs or symptoms of neurological disorders (for example, numbness or weakness of the legs, bowel or bladder dysfunction). If neurological disorders are detected, urgent diagnosis and treatment is necessary. The physician should compare the potential benefits and risks of spinal cord intervention to patients receiving anticoagulants or preparing to receive anticoagulants for the prevention of thrombosis. The epidural catheter is removed no earlier than 18 hours after the last dose of rivaroxaban is prescribed. Rivaroxaban should not be prescribed earlier than 6 hours after removing the epidural catheter. In the case of a traumatic puncture, the appointment of rivaroxaban should be postponed for 24 hours.

With the exception of the effects associated with the enhancement of pharmacological action (bleeding), the analysis of preclinical data obtained in studies on pharmacological safety revealed no specific danger to humans.

Studies on the effect of rivaroxaban on the ability to drive vehicles and work with potentially dangerous moving machinery have not been conducted.

In the postoperative period, rarely there were cases of fainting and dizziness. Patients who experience these adverse reactions should not drive or work with moving machinery.

The drug should be kept out of reach of children at a temperature not higher than 30 ° C.