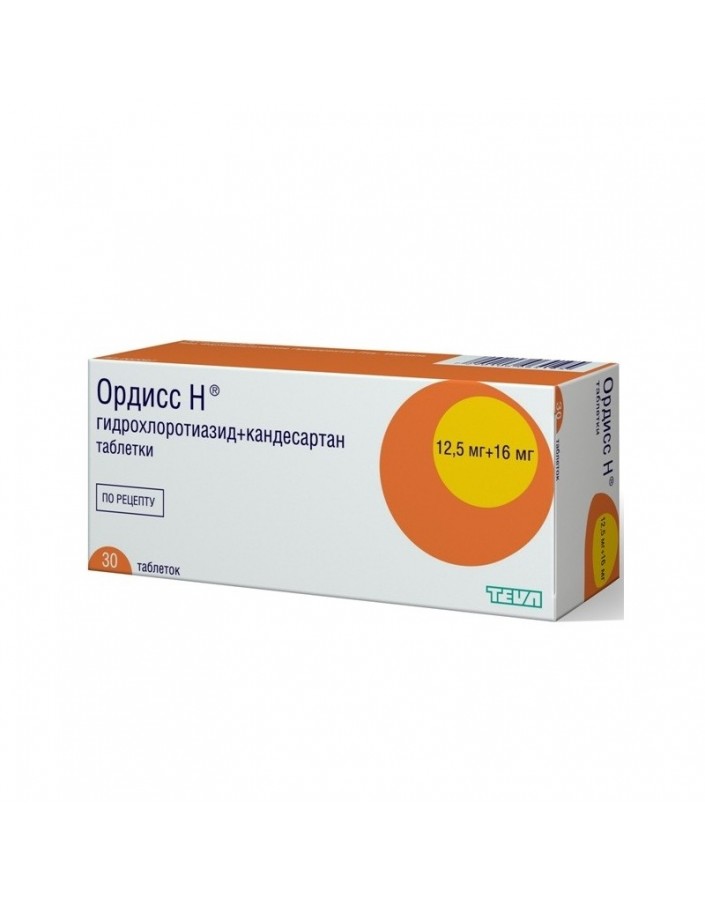 Angiotensin II is the main hormone of the RAAS, which plays an important role in the pathogenesis of hypertension, heart failure and other cardiovascular diseases. The main physiological effects of angiotensin II are vasoconstriction, stimulation of aldosterone production, regulation of the water-electrolyte state, and stimulation of cell growth. The effects are mediated by the interaction of angiotensin II with type 1 angiotensin receptors (AT1receptors).

When comparing Candesartan with ACE inhibitors, cough development was less common in patients who received candesartan.

Candesartan does not bind to receptors of other hormones and does not block the ion channels involved in regulating the functions of the cardiovascular system.

Hydrochlorothiazide - thiazide diuretic, inhibits the active reabsorption of sodium, mainly in the distal renal tubules and enhances the release of sodium ions, chlorine and water.The excretion of potassium and Magnesium by the kidneys increases with the dose, while Calcium begins to be reabsorbed in larger quantities than before.

Hydrochlorothiazide reduces the volume of blood plasma and extracellular fluid, reduces the intensity of blood transport by the heart, reduces blood pressure. During long-term treatment, the hypotensive effect develops due to the expansion of arterioles. With prolonged use of hydrochlorothiazide decreases the risk of cardiovascular diseases and mortality.

Candesartan and hydrochlorothiazide have a cumulative hypotensive effect. In patients with arterial hypertension, the use of candesartan / hydrochlorothiazide causes an effective and prolonged decrease in blood pressure without an increase in heart rate. Orthostatic hypotension at the first dose of the drug is not observed, after the end of treatment arterial hypertension does not increase.

After a single dose of candesartan / hydrochlorothiazide, the main hypotensive effect develops within 2 hours. The use of the drug 1 time / day effectively and gently reduces blood pressure within 24 hours with a slight difference between the maximum and average effect of the action. With prolonged treatment, a steady decrease in blood pressure occurs within 4 weeks after the start of the drug and can be maintained with a long course of treatment.

Currently, there are no data on the use of candesartan / hydrochlorothiazide in patients with renal failure, nephropathy, reduced left ventricular function, acute heart failure, and after myocardial infarction.

The effectiveness of candesartan / hydrochlorothiazide is independent of gender and age.

Cmaxin blood plasma is achieved 3-4 hours after taking the pill form of the drug. With increasing doses in the recommended limits, the concentration of candesartan increases linearly. Binding of candesartan to plasma proteins - more than 99%. Plasma vdcandesartan is 0.1 l / kg.

The pharmacokinetic parameters of candesartan do not depend on the sex of the patient.

Candesartan. Candesartan is mainly excreted by the kidneys and through the intestine with bile in an unchanged form and is only slightly metabolized in the liver. T1/2 approximately 9 hours. There is no cumulation of candesartan in the body.

Hydrochlorothiazide. Hydrochlorothiazide is not metabolized and is almost completely excreted in the form of the active form of the drug by glomerular filtration and active tubular secretion in the proximal nephron. T1/2 is about 8 hours and does not change when taken together with candesartan. Approximately 70% of the dose taken orally is excreted by the kidneys within 48 hours. When using a combination of drugs, no additional accumulation of hydrochlorothiazide was found in comparison with monotherapy.

Candesartan. In patients older than 65 years Cmax and AUC of candesartan are increased by 50% and 80%, respectively, compared with young patients. However, the hypotensive effect and the incidence of side effects with candesartan / hydrochlorothiazide do not depend on the age of the patients.

In patients with mild to moderate renal impairment Cmax and AUC of candesartan increased by 50% and 70% respectively, while T1/2 unchanged compared with patients with normal renal function.

In patients with severe renal impairment and / or those on hemodialysis Cmax and AUC of candesartan increased by 50% and 110% respectively, and T1/2 increased by 2 times.

In patients with mild and moderately impaired liver function, an increase in AUC of candesartan was noted by 23%.

- treatment of arterial hypertension in patients for whom combination therapy is indicated.

Order N® should be taken orally 1 time / day, regardless of the meal.

The main hypotensive effect is achieved, as a rule, in the first 4 weeks after the start of treatment.

Safety and efficacy of the use of the drug Order H® atchildren and adolescents under the age of 18 not installed.

From the digestive system:very rarely - nausea.

On the part of the respiratory system:very rarely - cough.

From the musculoskeletal system: very rarely - back pain, arthralgia, myalgia.

On the part of the immune system: rarely an anaphylactic reaction.

On the part of the organ of vision: rarely - blurred vision, acute myopia, acute angle-closure glaucoma.

- hypersensitivity to candesartan, hydrochlorothiazide and other components of the drug;

- hypersensitivity to other sulfonamide derivatives;

- simultaneous use with aliskiren or aliskiren-containing drugs in patients with diabetes and / or renal dysfunction (GFR <60 ml / min / 1.73 m2);