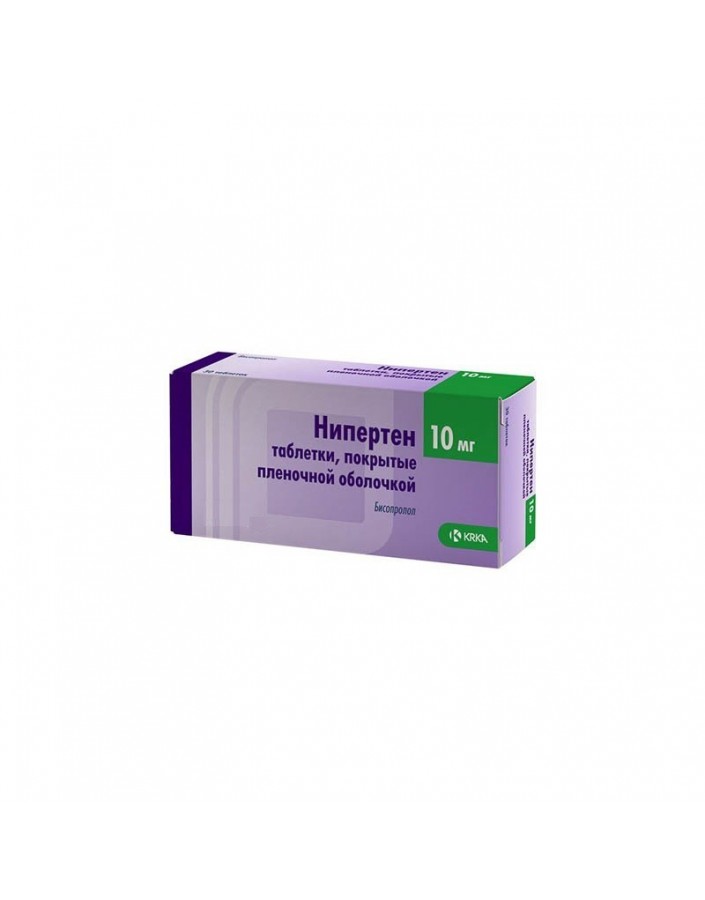 Inside, in the morning on an empty stomach, without chewing, once.

Hypertension and coronary heart disease: prevention of strokes of stress
It is recommended to take 5 mg once. If necessary, increase the dose
up to 10 mg 1 time per day. The maximum daily dose is 20 mg.
In patients with impaired renal function with creatinine clearance (CK) less
20 ml / min, with a pronounced hepatic impairment, the maximum daily
Dose - 10 mg.
Dose adjustment in elderly patients is not required. Chronic heart failure
The beginning of the treatment of chronic heart failure with the drug Niperten requires a mandatory special period of selection of doses. The prerequisites for starting therapy are as follows:

Treatment is prescribed in accordance with the specified dosage regimen.
Possible individual patient response to the prescribed therapy, ie, the dose can be
increase only if the previous dose was well tolerated.

The maximum recommended dose of the drug Niperten is 10 mg 1 time per day. After starting treatment with the drug in a dose of 1.25 mg (1/2 pill 2.5 mg), the patient should be monitored for about 4 hours (monitoring heart rate, blood pressure, conduction disturbances on the ECG, signs of worsening chronic heart failure).

During the period of the selection of doses or after it, a temporary worsening of the course of CHF, fluid retention, hypotension or bradycardia may occur. In this case, it is recommended, first of all, to pay attention to the selection of the dose of concomitant basic therapy (to optimize the dose of diuretic and / or ACE inhibitor), before lowering the dose of the drug Hypertension. Treatment with the drug should be interrupted only if absolutely necessary.
After stabilization of the patient's condition, it is necessary to re-titrate, or continue treatment.

Control of patients taking the drug Niperten should include measuring heart rate and blood pressure (at the beginning of treatment - daily, then once every 3-4 months), conducting an ECG, determining blood glucose in patients with diabetes mellitus (1 time in 4-5 month). In elderly patients, it is recommended to monitor renal function (1 time in 4-5 months). The patient should be trained in the method of counting heart rate and instructed on the need for medical consultation with a heart rate of less than 50 bpm.

Allergens used for immunotherapy or allergen extracts for skin tests increase the risk of severe systemic allergic reactions or anaphylaxis in patients receiving Bisoprolol.
Iodine radiopaque agents for intravenous administration increase the risk of Anaphylactic reactions.
Phenytoin when administered intravenously, means for inhalation anesthesia (derivatives of hydrocarbons) increase the severity of the cardiodepressive action and the likelihood of a decrease in blood pressure.
Changes the effectiveness of insulin and hypoglycemic agents for oral administration, masks the symptoms of developing hypoglycemia (tachycardia, increased blood pressure). Reduces the clearance of Lidocaine and xanthines (except for theophylline) and increases their concentration in the blood plasma, especially in patients with initially increased clearance of theophylline under the influence of smoking.
The hypotensive effect is weakened by non-steroidal anti-inflammatory drugs (NSAIDs) (sodium ion retention (Na +) and blockade of prostaglandin synthesis by the kidneys), glucocorticosteroids and estrogens (Na + ion retention).
Cardiac glycosides, methyldopa, reserpine and guanfacine, blockers of “slow” Calcium channels (verapamil, diltiazem), Amiodarone and other antiarrhythmic drugs increase the risk of developing or worsening bradycardia, AV blockade, cardiac arrest and heart failure.
Nifedipine can lead to a significant decrease in blood pressure.
Diuretics, clonidine, sympatholytics, hydralazine and other antihypertensives
may lead to an excessive decrease in blood pressure.
It prolongs the action of non-depolarizing muscle relaxants and increases the anticoagulant effect of coumarins.
Three - and tetracyclic antidepressants, antipsychotics (neuroleptics), ethanol, sedatives and hypnotic drugs increase the depression of the central nervous system.
It is not recommended simultaneous use with MAO inhibitors, due to a significant increase in the hypotensive effect, the interval in treatment between taking MAO inhibitors and bisoprolol should be at least 14 days. Unhydrogenated ergot alkaloids increase the risk of developing disorders of the peripheral circulation.
Ergotamine increases the risk of developing impaired peripheral circulation; Sulfasalazine increases the concentration of bisoprolol in the blood plasma; rifampicin reduces tm.

During pregnancy and lactation, the use of the drug is possible if the benefit to the mother exceeds the risk of side effects in the fetus and child. There is no data on the allocation of bisoprolol in breast milk. Therefore, if necessary, use of the drug during lactation, breastfeeding should be stopped.

The question of the possibility of practicing potentially hazardous activities that require increased attention and quickness of psychomotor reactions,should be addressed only after evaluating the patient's individual response to the drug (especially at the beginning of treatment, due to the possibility of dizziness).

Symptoms: arrhythmia, ventricular premature beats, severe bradycardia, AV block, marked reduction in blood pressure, CHF, cyanosis of the finger or palm nails, difficulty breathing, bronchospasm, dizziness, fainting, convulsions. Treatment: gastric lavage and the appointment of absorbent funds; symptomatic therapy: with advanced AV blockade, intravenous administration of 1-2 mg of atropine, epinephrine or temporary staging of a pacemaker; for ventricular extrasystoles - lidocaine (class IA drugs are not used); with a decrease in blood pressure, the patient should be in the Trendelenburg position; if there are no signs of pulmonary edema - intravenous administration of plasma-substituting solutions, with ineffectiveness - administration of epinephrine, dopamine,dobutamine (to maintain chronotropic and inotropic action and eliminate pronounced decrease in blood pressure); in heart failure - cardiac glycosides, diuretics, glucagon; with convulsions, intrazonal diazepam; with bronchospasm - beta-2 adrenostimulators inhalation.

Pharmacodynamics. Selective beta-1 adrenergic blocker, without its own sympathomimetic activity, does not have a membrane stabilizing effect. Reduces the activity of plasma renin, reduces myocardial oxygen demand, reduces heart rate (HR) (at rest and under load). It has hypotensive, antiarrhythmic and antianginal effects. By blocking Pi-adrenoreceptors of the heart in low doses, it reduces catecholamine-stimulated formation of cyclic adenosine monophosphate (cAMP) from adenosine triphosphate (ATP), reduces the intracellular current of calcium ions (Ca2 +), has a negative chrono, dromo, batmo- and inotropic effect, reduces the region. and excitability.
When the therapeutic dose is exceeded, beta-2 has an adreno-blocking effect. General peripheral vascular resistance at the beginning of the drug, increases in the first 24 hours (as a result of a reciprocal increase in alpha-adrenoreceptor activity and removal of beta-2 adrenoreceptor stimulation), after 1-3 days it returns to baseline, and after prolonged use it decreases.The hypotensive effect is associated with a decrease in the minute volume of blood, sympathetic stimulation of peripheral vessels, the restoration of sensitivity in response to a decrease in blood pressure (BP) and the effect on the central nervous system (CNS). In case of arterial hypertension, the effect occurs in 2-5 days, a stable effect is noted in 1-2 months.
The anti-anginal effect is due to a decrease in myocardial oxygen demand as a result of a decrease in heart rate (HR) and a decrease in myocardial contractility, diastole lengthening, and improvement in myocardial perfusion. By increasing the end-diastolic pressure in the left ventricle and increasing the stretching of the muscle fibers of the ventricles, oxygen demand may increase, especially in patients with chronic heart failure (CHF).
The antiarrhythmic effect is due to the elimination of arrhythmogenic factors (tachycardia, increased activity of the sympathetic nervous system, increased cAMP, arterial hypertension), a decrease in the rate of spontaneous excitation of sinus and ectopic pacemakers and a slowdown of atrioventricular (AV) conduction (mainly in the antegrade and, to a lesser extent, in the retrograde direction through the AV node) and along additional paths. When used in moderate therapeutic doses, in contrast to non-selective beta-blockers, it has a less pronounced effect on organs containing beta-2 adrenoreceptors (pancreas, skeletal muscles,smooth muscles of peripheral arteries, bronchi and uterus) and carbohydrate metabolism; does not cause a delay of sodium ions (Na +) in the body; the severity of atherogenic action does not differ from that of propranolol.

Absorption - 80 - 90%, food intake does not affect absorption. The maximum concentration in the blood plasma is observed after 1-3 hours, the connection with plasma proteins is about 30%. The permeability through the blood-brain barrier and the placental barrier is low.
50% of the dose is metabolized in the liver to form inactive metabolites, the half-life (T 1/2) is 10-12 hours. About 98% is excreted by the kidneys, of which 50% is excreted unchanged; less than 2% - with bile.

No need to enter data.

2 years.
Do not use the drug after the expiration date.

List B.
Store at a temperature not higher than 30 ° C. Keep out of the reach of children.