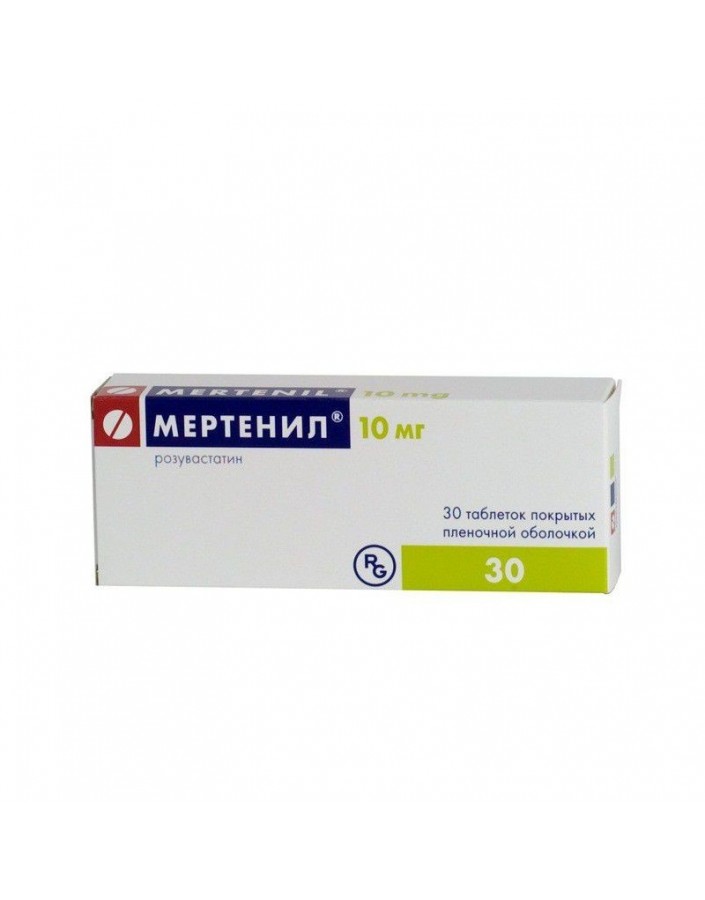 MERTENIL is a hypolipidemic agent from the group of statins, an inhibitor of HMG-CoA reductase. According to the principle of competitive antagonism, the statin molecule binds to the part of the coenzyme A receptor where this enzyme is attached. Another part of the statin molecule inhibits the conversion of hydroxymethylglutarate to mevalonate, an intermediate product in the synthesis of the cholesterol molecule. Inhibition of the activity of HMG-CoA reductase leads to a series of consecutive reactions, which result in a decrease in the intracellular cholesterol content and a compensatory increase in the activity of LDL receptors and, accordingly, an acceleration of cholesterol catabolism (Xc) of LDL.

The lipid-lowering effect of statins is associated with a decrease in total Xc due to Xc-LDL. A decrease in the level of LDL is dose-dependent and is not linear, but exponential.

Statins do not affect the activity of lipoprotein and hepatic lipases, do not have a significant effect on the synthesis and catabolism of free fatty acids, therefore their effect on the TG level is secondary and indirectly through their main effects on reducing the level of Xc-LDL. A moderate decrease in the level of TG in the treatment with statins seems to be associated with the expression of the remnant (apo E) receptors on the surface of hepatocytes involved in the catabolism of LPPP, which are approximately 30% TG.

In addition to the lipid-lowering action, statins have a positive effect on endothelial dysfunction (preclinical sign of early atherosclerosis), on the vascular wall, atheroma, improve the rheological properties of blood, have antioxidant, anti-proliferative properties.

The therapeutic effect is manifested within 1 week. after the start of therapy and after 2 weeks of treatment, it is 90% of the maximum possible effect, which is usually achieved by week 4 and then remains constant.

Familial homozygous hypercholesterolemia as an adjunct to diet and other cholesterol-lowering therapy or in cases where such therapy is not suitable for the patient.

Liver diseases in the active phase (including a persistent increase in liver transaminase activity or any increase in transaminase activity by more than 3 times as compared with VGN), pronounced renal dysfunction (CC <30 ml / min), myopathy, cyclosporine co-administration, pregnancy, lactation (breastfeeding), women of reproductive age who do not use adequate methods of contraception, children and adolescents under 18 years old (since efficacy and safety have not been established), increased sensitivity to Rosuvastatin.

Is ingested. The recommended initial dose is 10 mg 1 time / If necessary, the dose may be increased to 20 mg after 4 weeks. Increasing the dose to 40 mg is possible only in patients with severe hypercholesterolemia and a high risk of cardiovascular complications (especially in patients with familial hypercholesterolemia) with insufficient effectiveness at a dose of 20 mg and subject to the supervision of a physician.

Musculoskeletal system: often myalgia; arthralgia, arthritis, muscle hypertonus, back pain, pathological pearl of a limb (without injuries) are possible; rarely - myopathy, rhabdomyolysis (simultaneously with impaired renal function, while receiving the drug in a dose of 40 mg).

Urogenital: tubular proteinuria (in less than 1% of cases - for doses of 10 and 20 mg, 3% of cases - for a dose of 40 mg); possible - peripheral edema (arms, legs, ankles, legs), lower abdominal pain, urinary tract infections.

The simultaneous use of rosuvastatin and antacids containing aluminum and Magnesium hydroxide, reduces the plasma concentration of rosuvastatin by about 50%. This effect is less pronounced if antacids are applied 2 hours after taking rosuvastatin (the clinical significance is unknown).

Gemfibrozil, other fibrates and lipid-lowering doses of nicotinic acid (≥1 g /) increased the risk of myopathy, while being used with other HMG-CoA reductase inhibitors, probably because they can cause myopathy and when used as monotherapy.