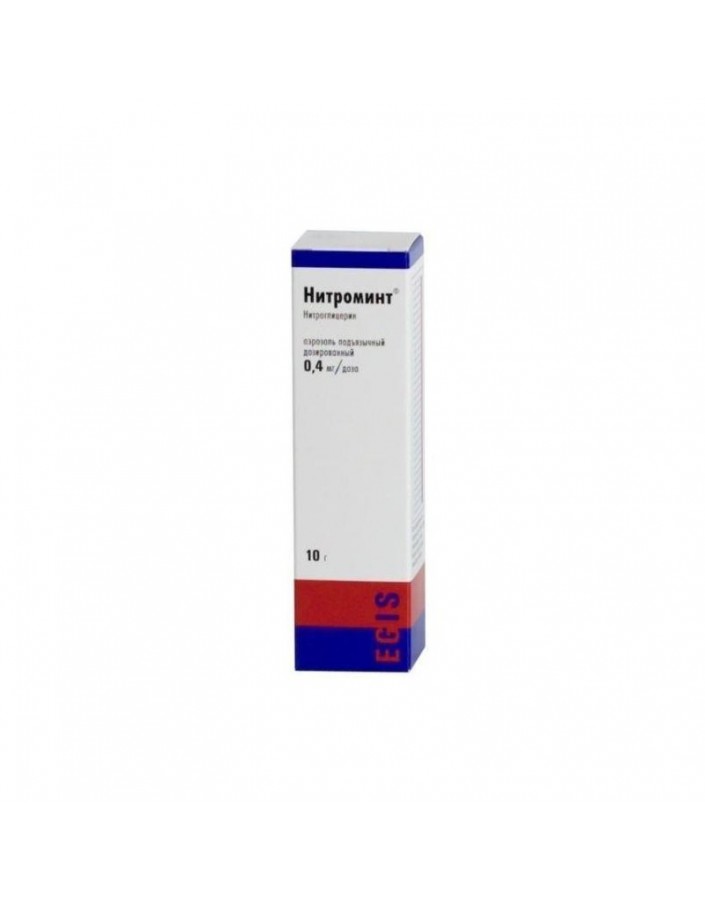 Peripheral vasodilator with a predominant effect on the venous vessels. Antianginal drug. Reduces the need for myocardium in oxygen by reducing the preload and afterload on the heart, which is associated with the expansion of peripheral veins and a decrease in CRPS. It promotes the redistribution of coronary blood flow in the ischemic zones of the myocardium due to the expansion of the coronary vessels and the reduction of extravasal compression of the vessels of the myocardium.
The use of Nitromint in patients with angina pectoris leads to increased tolerance to physical exertion. Nitromint has a positive effect in heart failure, since by reducing the preload, it reduces the increased filling pressure of the left ventricle, reduces the severity of venous stasis in the pulmonary circulation, practically without changing the minute volume of the heart.
When applying Nitromint aerosol to the oral mucosa, the effect of the drug develops within 1 minute.

Suction
With the sublingual application of the aerosol, nitromyntine nitroglycerin is rapidly absorbed.
Bioavailability is 100%. Cmax reached 5 min after the use of the drug; after 30 min, the concentration decreases rapidly. There is a significant correlation between the concentration of nitroglycerin in the blood plasma, heart rate, systolic blood pressure, left ventricular function.
Distribution and metabolism
Nitroglycerin has a big Vd; is actively biotransformed in the body.
Removal
Excreted by the kidneys as glucuronides.

- prevention and relief of angina attacks;
- acute left ventricular failure, including with myocardial infarction (as part of combination therapy)

- severe arterial hypotension, shock, collapse;
- increased intracranial pressure due to hemorrhage in the brain or injury;
- angle-closure glaucoma;
- anemia;
- hypersensitivity to nitroglycerin and other organic nitrates.

Use of Nitromint during pregnancy and lactation (breastfeeding) is possible only for health reasons, when the intended benefits to the mother outweigh the potential risk to the fetus or baby.

Care should be taken when using Nitromint in patients with open-angle glaucoma, in the acute period of myocardial infarction, in hyperthyroidism, cerebral ischemia, and also in patients with hypoxia on the background of bronchopulmonary diseases.
In patients with hypertrophic cardiomyopathy, treatment with nitrates can lead to the appearance and intensification of strokes.
The use of Nitromint against the background of quinidine can cause orthostatic collapse. Patients who are assigned quinidine sulfate, within 30-40 minutes after sublingual administration of the dose of Nitromint, should be in a horizontal position to prevent possible hemodynamic disorders.
During treatment with Nitromint, drinking alcohol is prohibited.
When using an aerosol Nitromint cylinder must be kept in a vertical position, the metering valve should be at the top. The cylinder is flammable and explosive; do not use an aerosol near an open flame and smoke while spraying.
Influence on ability to drive motor transport and control mechanisms
Nitromint, especially at the beginning of treatment, can adversely affect the speed of psychomotor reactions of the patient, which should be considered when driving vehicles or practicing other potentially dangerous activities.

Symptoms: severe hypotension, tachycardia, collapse, cyanosis, methemoglobinemia.
Treatment: during collapse, the patient should be given a horizontal position with the legs raised upwards, if necessary - to put the harnesses. In case of methemoglobinemia, intravenous injection of methylene blue is indicated (on average 0.1-0.15 ml of 1% solution per 1 kg of body weight).

The drug should be stored in a cool, dark place.