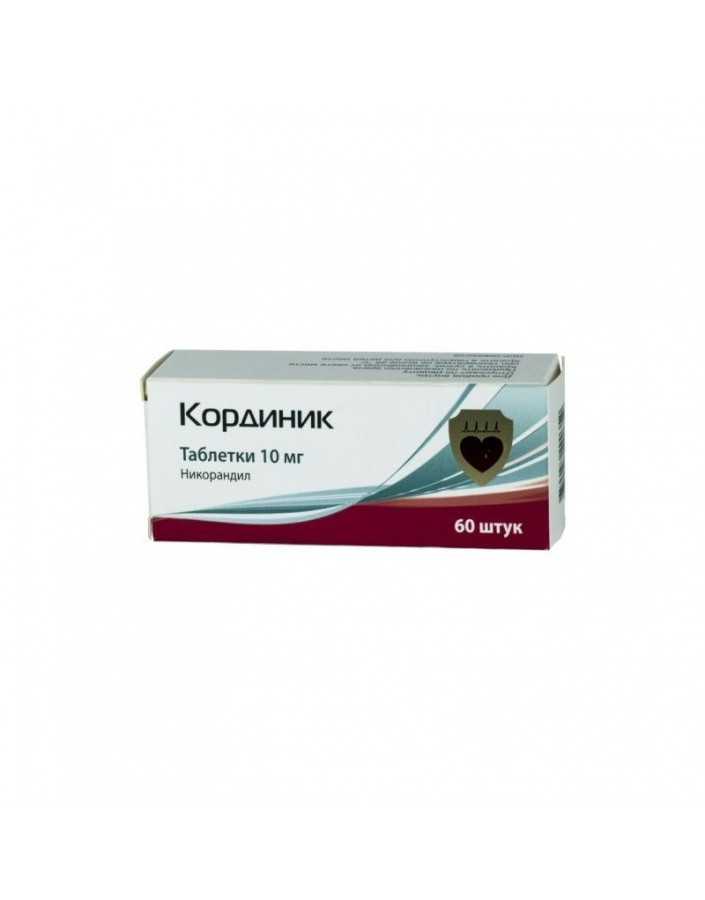 Pharmacodynamics. Nicorandil has antianginal action, which is based on a combination of nitrate-like properties and the ability to open potassium channels. Due to the opening of potassium channels, nicorandil causes hyperpolarization of the cell membrane, and nitrate-like
the effect is to increase the intracellular content of cyclic guanyl monophosphate. These pharmacological effects lead to relaxation of smooth muscle cells and cell protection of the myocardium during ischemia. Hemodynamic effects are expressed in a balanced decrease in pre- and afterload (unlike nitrates and “slow” Calcium channel blockers (BCCA), which act mainly on pre- or afterload, respectively). Taking into account the selective vasodilation of the coronary arteries, as a result, the load on the ischemic myocardium is minimal. Nicorandil does not affect myocardial contractility, practically does not change the heart rate (HR). Reduces systemic blood pressure (BP) by less than 10%, has a beneficial positive effect on cerebral circulation in patients with ischemic stroke. Nicorandil does not affect lipid metabolism and glucose metabolism.Nicorandil relieves an attack of angina with a decrease in pain within 4-7 minutes after taking under the tongue and its complete relief in 12-17 minutes.
Pharmacokinetics. Nicorandil is rapidly and completely absorbed from the gastrointestinal tract, reaching a maximum plasma concentration in 0.5-1 hours. It is not subject to intensive metabolism in the liver and has a half-life of 50 minutes. Excreted mainly by the kidneys.
Nicorandil slightly associated with plasma proteins. The free fraction in plasma is about 75%.
Pharmacokinetic indicators depend little on the age of the patient, the presence of concomitant pathology of the liver or kidneys, the appointment of concomitant therapy.

Inside Squeezed with water, take, regardless of the meal.
The dose of the drug is selected individually depending on the severity and duration of the disease.
Relief of angina.
The drug should be taken immediately at the first signs of an angina attack: the drug in a dose of 20 mg is placed under the tongue and held until completely dissolved, without swallowing.
Prevention of attacks of stable angina (long-term therapy of stable angina).
The drug is usually prescribed in a dose of 10 to 20 mg 3 times a day.
The maximum daily dose of 80 mg.
If a headache occurs, the initial dose may be reduced.

Cardiovascular system: heartbeat, tachycardia, lowering blood pressure, "flushing" of blood to the skin of the face, peripheral edema.
Central nervous system: weakness, headache (does not require discontinuation of the drug, can be alleviated by reducing the initial dose of the drug), dizziness, tinnitus, insomnia.
Digestive tract: nausea, vomiting, discomfort in the stomach, feeling of fullness in the stomach, stomatitis (extremely rare); in some cases, it is possible to increase the activity of “hepatic” transaminases (alanine aminotransferase and aspartate aminotransferase), alkaline phosphatase.
Hypersensitivity reactions: allergic reactions may develop.

Symptoms: pronounced decrease in blood pressure, tachycardia.
Treatment: gastric lavage, the appointment of Activated carbon (especially in the first 2 hours after an overdose), maintaining function
cardiovascular system, the elevated position of the limbs, symptomatic and supportive therapy, in / in the introduction of Calcium gluconate and dopamine. Perhaps the use of hemodialysis.
Interaction with other drugs
When taken concomitantly with antidepressants, phosphodiesterase-5 inhibitors (sildenafil, vardenafil, tadalafil), vasodilators, antihypertensive drugs, tricyclic antidepressants, diuretics, beta-blockers, monoamine oxidase oxidase inhibitors (MAO,).
At the same time taking the drug with the drug sapropterin may decrease blood pressure below normal.

Drug needs to be canceled gradually.
During the period of drug therapy, it is necessary to monitor blood pressure, ECG indicators, the content of potassium ions and sodium ions in the blood; may increase existing cardiac arrhythmias.
Care must be taken when driving and engaging in other potentially hazardous activities that require increased concentration and psychomotor speed.

In a dry, dark place at a temperature not higher than 25 ° C. Keep out of the reach of children.