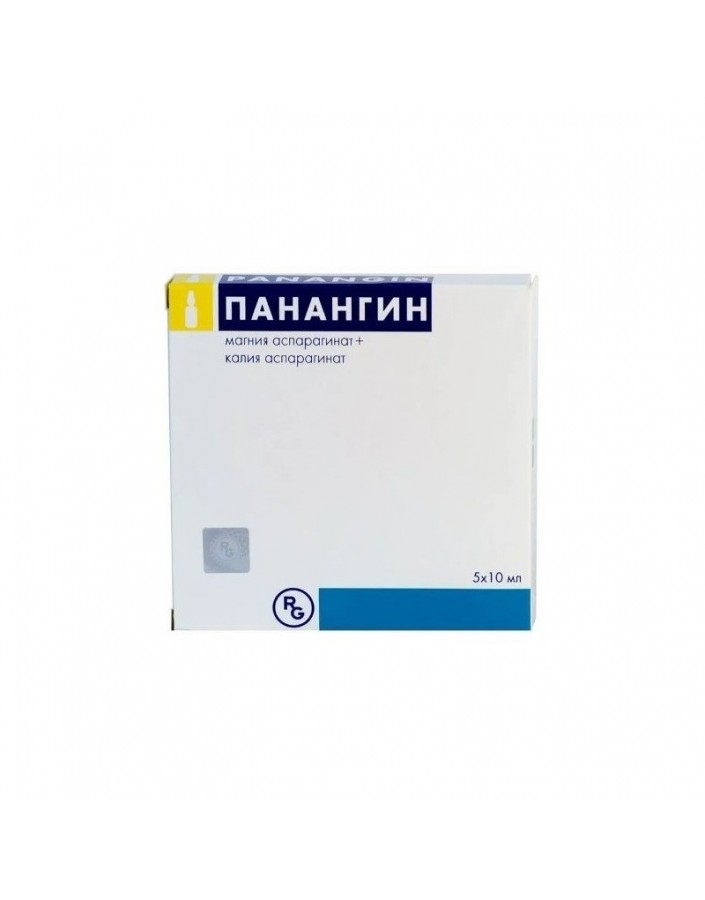 In the vial of colorless glass 10 ml solution. In the package 5 ampoules.

Panangin - a drug that affects metabolic processes. Source of potassium and magnesium ions.
Potassium and magnesium are intracellular cations, which play a major role in the functioning of many enzymes, the interaction of macromolecules and intracellular structures, and in the mechanism of muscle contractility. The intra- and extracellular ratio of potassium, magnesium, Calcium and sodium ions affects the contractility of the myocardium. A low level of potassium and / or magnesium ions in the internal environment can have proarrhythmic effects, predispose to the development of arterial hypertension, atherosclerosis of the coronary arteries and the occurrence of metabolic changes in the myocardium.
One of the most important physiological functions of potassium is to maintain the membrane potential of neurons, myocytes, and other excitable structures of myocardial tissue.The imbalance between intra- and extracellular potassium levels leads to a decrease in myocardial contractility, the occurrence of arrhythmias, tachycardia and an increase in the toxicity of cardiac glycosides.
Magnesium is a cofactor of and> 300 enzymatic reactions of energy metabolism and the synthesis of proteins and nucleic acids. Magnesium reduces the contraction voltage and heart rate, leading to a decrease in myocardial oxygen demand. Magnesium has an anti-ischemic effect on myocardial tissue. Decrease in contractility of myocytes of smooth muscles of arteriole walls, incl. coronary leads to vasodilation and increased coronary blood flow.
The combination of potassium and magnesium ions in one preparation is justified by the fact that the deficiency of potassium in the body is often accompanied by a deficiency of magnesium and requires the simultaneous correction of the content in the body of both ions. With the simultaneous correction of the levels of these electrolytes, an additive effect is observed; in addition, potassium and magnesium reduce the toxicity of cardiac glycosides, without affecting their positive inotropic effect.
Endogenous aspartate (asparaginate), due to its negligible dissociation, acts as a conductor of ions into cells as complex compounds. Potassium asparaginate and magnesium asparaginata improve myocardial metabolism.

- As part of the combined treatment of heart failure, myocardial infarction, cardiac arrhythmias (mainly ventricular arrhythmias).
- To improve the tolerability of cardiac glycosides.

Data on the negative effects of the drug in the form of a solution for IV injection during pregnancy and lactation (breastfeeding) are not available.

The drug is prescribed in / in the drip, in the form of a slow infusion. Single dose - 1-2 ampoules, if necessary, you can re-enter after 4-6 hours. To prepare a solution for intravenous infusion, the contents are 1-2 amp. dissolved in 50-100 ml of 5% glucose solution.

With rapid on / in the introduction: may develop symptoms of hyperkalemia and / or hypermagnesemia.

It should be used with caution in patients with an increased risk of developing hyperkalemia. In this case, it is necessary to regularly monitor the level of potassium ions in the blood plasma. Before taking the drug, the patient should consult a doctor. With rapid on / in the introduction of the drug may develop skin hyperemia.
Application for violations of renal function: The drug is contraindicated in the following cases - acute and chronic renal failure, oliguria, anuria.
Influence on ability to drive motor transport and control mechanisms: the drug does not affect the ability to drive and engage in activities that require high concentration of attention and speed of psychomotor reactions.

With simultaneous use with potassium-sparing diuretics (triamterene, spironolactone), beta-blockers, cyclosporine, Heparin, ACE inhibitors, NSAIDs, the risk of hyperkalemia increases until arrhythmia and asystolia occur. The use of potassium preparations together with the corticosteroids eliminates the hypokalemia they cause. Under the influence of potassium, a decrease in the undesirable effects of cardiac glycosides is observed.
The drug enhances the negative dromo-and bathmotropic action of antiarrhythmic drugs.
Due to the presence of potassium ions in the composition of the drug when using Panangin with ACE inhibitors, beta-blockers, cyclosporine, potassium-sparing diuretics, heparin, NSAIDs, hyperkalemia may develop (potassium plasma levels must be monitored); with anticholinergics - a more pronounced decrease in intestinal motility; with cardiac glycosides - reducing their action.
Magnesium preparations reduce the effectiveness of neomycin, polymyxin B, Tetracycline and streptomycin.
Anesthetics increase the inhibitory effect of magnesium on the central nervous system. When applying Panangin with atracurium, dexametonium,suxametonium may increase neuromuscular blockade; with calcitriol - an increase in the level of magnesium in the blood plasma; with calcium preparations, a decrease in the action of magnesium ions is observed.
With the simultaneous use of Panangin with potassium-sparing diuretics and ACE inhibitors increases the risk of developing hyperkalemia (plasma potassium levels should be monitored).