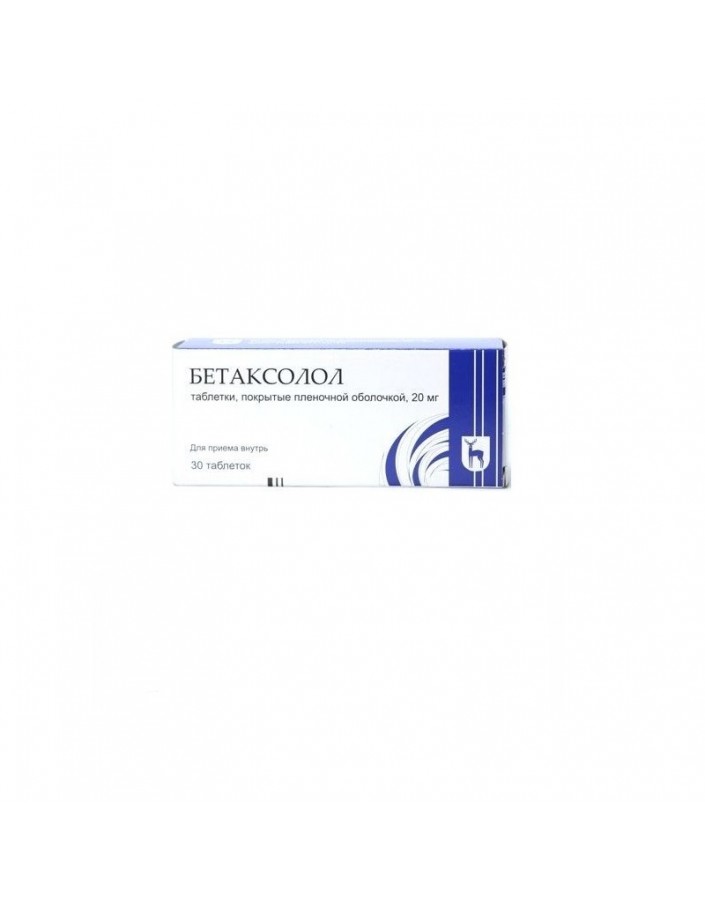 - prevention of strokes of angina.

Take the drug inside, do not chew, drink plenty of liquids.

In patients with renal failure The dose of the drug must be set in accordance with the patient's kidney function: a dose change is not required for creatinine clearance of more than 20 ml / min. However, at the beginning of treatment, it is recommended to conduct clinical observation until the equilibrium levels of the drug in the blood are reached (4 days on average).

In patients with hepatic impairment dose change is usually not required. However, at the beginning of therapy, more careful clinical observation of the patient is recommended.

From the side of the central nervous system: fatigue, weakness, dizziness, headache, drowsiness or insomnia, nightmares, depression, anxiety, confusion or short-term memory loss, hallucinations, asthenia, myasthenia gravis, paresthesia in the extremities (in patients with intermittent claudication and Reino syndrome), tremor.

Respiratory: nasal congestion, difficulty breathing when administered in high doses (loss of selectivity) and / or in predisposed patients - laryngo and bronchospasm.

Teratogenicity. There was no teratogenic effect of the drug in animal experiments.So far, no teratogenic effects have been observed in humans, and controlled, prospective studies have not revealed congenital malformations. Use during pregnancy is possible only when the benefit to the mother outweighs the potential risk to the fetus and / or the child.

Breast-feeding. Beta-blockers penetrate into the pectoral. The risk of hypoglycemia or bradycardia has not been studied, so breastfeeding during treatment should be stopped.

In newborns whose mothers were treated with beta-blockers, the effect of the latter persists for several days after birth. Although this residual effect may not have clinical consequences, nevertheless, heart disease may develop, which requires intensive treatment of the newborn. In such a situation, the introduction of solutions that increase blood volume should be avoided (risk of developing acute pulmonary edema). Bradycardia, respiratory distress syndrome and hypoglycemia have also been reported. Therefore, careful observation of newborns in specialized conditions (monitoring of heart rate and blood glucose level during the first 3-5 days of life) is recommended.

In patients with hepatic insufficiency, a dose change is usually not required. However, at the beginning of therapy, more careful clinical observation of the patient is recommended.

The dose of the drug must be set in accordance with the patient's kidney function: a dose change is not required when creatinine clearance is more than 20 ml / min. However, at the beginning of treatment, it is recommended to conduct clinical observation until the equilibrium levels of the drug in the blood are reached (4 days on average).

Treatment of patients with angina should never be interrupted abruptly: a sudden cancellation can lead to severe cardiac arrhythmias, myocardial infarction or sudden death.

It is necessary to monitor patients taking Betaxolol, which should include monitoring of heart rate and blood pressure (at the beginning of treatment daily, then once every 3-4 months), glucose content in patients with diabetes mellitus (once every 4-5 months); renal function in elderly patients (1 time in 4-5 months). The patient should be trained in the method of counting heart rate and instructed on the need for medical consultation with a heart rate less than 50 beats / min. Treatment should not be stopped abruptly, especially in patients with ischemic heart disease. The dose should be reduced gradually, that is, within 1-2 weeks, and, if necessary, you can simultaneously begin replacement therapy to avoid progression of angina. In approximately 20% of patients with stenocardia, beta-blockers are not effective.

The main reasons are severe coronary atherosclerosis with a low ischemic threshold (the heart rate at the time of the development of an angina attack less than 100 beats / min) and an increased endodiastolic pressure of the left ventricle, which violates the subendocardial blood flow.

With simultaneous reception of clonidine, its reception can be terminated only a few days after the cancellation of Betaxolol.

Betaxolol should be discontinued before testing for blood and urine catecholamines, normetanephrine and vanillimindalnogo acid; antinuclear antibody titers.

Lactose. Due to the presence of lactose, this drug is contraindicated for congenital galactosemia, glucose / galactose malabsorption syndrome, or lactase deficiency.

Bronchial asthma and chronic obstructive pulmonary disease. Beta-blockers can be administered only to patients with moderate severity of the disease, with the choice of a selective beta-blocker in a low initial dose. Before treatment, it is recommended to evaluate the respiratory function. With the development of attacks during treatment can be used bronchodilators-β2adrenomimetics.

Bradycardia. The dose should be reduced if the heart rate is at rest below 50-55 beats per minute and the patient has clinical manifestations of bradycardia.

Atrioventricular block I degree. Given the negative dromotropic effect of beta-blockers, in blockade of the I degree, the drug should be used with caution.

Angina Prinzmetala. Beta-blockers may increase the number and duration of seizures in patients with Prinzmetal angina pectoris. Use of cardio selective beta1- blockers possible with less severe and mixed forms, provided that the treatment is carried out in combination with vasodilators.

Pheochromocytoma. In the case of beta-blockers in the treatment of arterial hypertension caused by pheochromocytoma, careful control of blood pressure is required.

Patients with renal failure. The dose must be adjusted depending on the concentration of creatinine in the blood or creatinine clearance.

Patients with diabetes. The patient should be warned about the need to increase the self-monitoring of blood glucose at the beginning of treatment. The initial symptoms of hypoglycemia may be masked, especially tachycardia, palpitations and sweating.

Psoriasis. A careful assessment of the need for prescribing the drug is required, as there are reports of deterioration during treatment with beta-blockers.

Allergic reactions. In patients prone to severe Anaphylactic reactions, especially those associated with the use of floctafenin or during desensitization, therapy with beta-blockers may lead to a further increase in reactions and a decrease in the effectiveness of treatment.

Therapy with beta-blockers should not be interrupted in the following cases:

- in patients with coronary insufficiency, it is desirable to continue treatment until surgery, given the risk associated with the sudden cancellation of beta-blockers;

- in the case of emergency operations or in cases where cessation of treatment is not possible, the patient should be protected from the effects of excitation of the vagus nerve by appropriate premedication with atropine, with repetition if necessary.For general anesthesia, it is necessary to use substances that inhibit the myocardium to the least extent;

- must take into account the risk of anaphylactic reactions.

Thyrotoxicosis. Symptoms of thyrotoxicosis may be masked during therapy with beta-blockers.

Athletes. Athletes must consider that the drug contains an active substance that can give a positive reaction when conducting doping control tests.

Interaction with alcohol. At the time of treatment to exclude the use of ethanol.

Interaction with tobacco. In smokers, the effectiveness of beta-blockers is lower.

Influence on ability to drive and / or mechanisms

During the period of treatment, care must be taken when driving vehicles and engaging in other potentially hazardous activities that require increased concentration and psychomotor speed.

Treatment: gastric lavage, the appointment of absorbent funds.In the case of bradycardia or an excessive decrease in blood pressure, the following measures should be taken:

- 1 mg of glucagon with repetition, if necessary;

- accompanied by, if necessary, a slow infusion of 25 μg of isoprenaline or the introduction of dobutamine 2.5-10 μg / kg / min.

In the case of heart failure (decompensation) in newborns whose mothers took beta-blockers during pregnancy:

- hospitalization in the intensive care unit;

- isoprenaline and dobutamine: usually in fairly high doses and for a long time, which requires the supervision of a specialist.

Many drugs can cause bradycardia. This group includes beta-adrenergic blockers, class IA antiarrhythmic drugs (quinidine, disopyramide), Amiodarone and sotalol from class III antiarrhythmics, diltiazem and Verapamil from class IV, and also digitalis glycosides, clonidine, guafantsin, meflokhin and cholinesterase and inhibitors of cholinesterase; for the treatment of Alzheimer's disease.

Floctafenin. In case of shock or arterial hypotension caused by floctafenin, beta-blockers cause a decrease in compensatory cardiovascular reactions.

Combinations to be avoided:

Combinations that should be used with caution:

Inhaled halogenated anesthetics. Beta-blockers reduce the hypotensive effect of Betaxolol (during the operation, the effect of beta-adrenergic receptors can be eliminated by beta-adrenostimulants). As a rule, therapy with beta-blockers should not be stopped, and abrupt withdrawal of the drug should be avoided in any case. The anesthesiologist must be informed of the treatment being carried out.

Insulin and oral sulfonylurea derivatives. All beta-blockers can mask certain symptoms of hypoglycemia: heartbeat and tachycardia. The patient should be warned about the need to enhance self-control of blood sugar levels, especially at the beginning of treatment.

Lidocaine / in. Increase in plasma Lidocaine concentration with possible increase in unwanted neurological symptoms and cardiovascular effects (decrease in lidocaine metabolism in the liver). Clinical and electrocardiographic observation and, possibly, control of plasma lidocaine concentration during treatment with beta-blockers and after its termination is recommended. If necessary, dose adjustment of lidocaine.

Phenytoin with on / in the introduction. Increased severity of cardiodepressive effects and the likelihood of lowering blood pressure.

Estrogen The weakening of the hypotensive effect (sodium retention).

Nifedipine. It can lead to a significant decrease in blood pressure.

Diuretics, clonidine, sympatholytic, hydralazine and other antihypertensive drugs. May lead to an excessive decrease in blood pressure.

Ethanol, sedatives and hypnotic drugs. Strengthen the oppression of the central nervous system.

It is not recommended simultaneous use with MAO inhibitors due to a significant increase in the hypotensive effect, the break in treatment between taking MAO inhibitors and Betaxolol should be at least 14 days.

Lengthens the action of non-depolarizing muscle relaxants and the anticoagulant effect of coumarins.

Reduces the clearance of xanthines (except diphillin) and increases their concentration in the blood plasma, especially in patients with initially increased clearance of theophylline (for example, under the influence of smoking).

The drug should be kept out of the reach of children, at a temperature not exceeding 25 ° C.