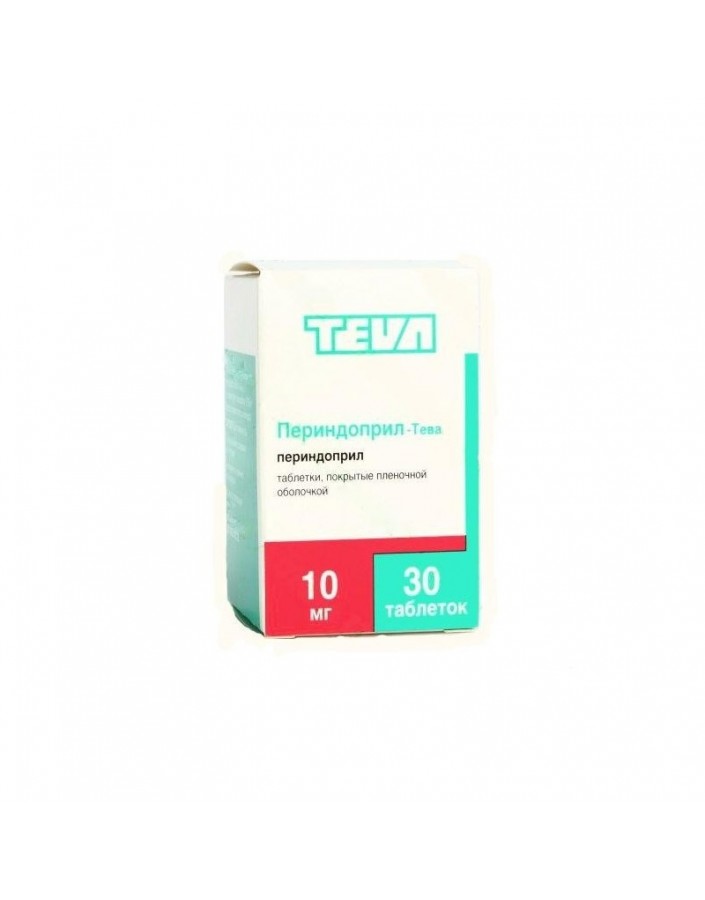 ACE inhibitor. It is a prodrug from which the active metabolite of perindoprilat is formed in the body. It is believed that the mechanism of antihypertensive action is associated with competitive inhibition of ACE activity, which leads to a decrease in the rate of angiotensin I conversion to angiotensin II, which is a powerful vasoconstrictor. As a result of a decrease in the concentration of angiotensin II, a secondary increase in plasma renin activity occurs due to the elimination of negative feedback during renin release and a direct decrease in aldosterone secretion. Due to the vasodilating action, it reduces the round fist (afterload), the pressure of jamming in the pulmonary capillaries (preload) and the resistance in the pulmonary vessels; increases heart volume and load tolerance.

The antihypertensive effect develops within the first hour after taking perindopril, reaches a maximum after 4-8 hours and lasts for 24 hours.

In clinical studies using perindopril (monotherapy or in combination with a diuretic) showed a significant reduction in the risk of recurrent stroke (both ischemic and hemorrhagic), as well as the risk of fatal or disabling strokes; major cardiovascular complications, including myocardial infarction, includingfatal; dementia associated with stroke; severe cognitive impairment. These therapeutic benefits were noted both in patients with hypertension and in normal blood pressure, regardless of age, gender, presence or absence of diabetes mellitus and type of stroke.

It has been shown that, with the use of perindopril tertbutylamine at a dose of 8 mg / day (equivalent to 10 mg of perindopril arginine) in patients with stable coronary artery disease, there is a significant decrease in the absolute risk of complications provided for by the main criterion of efficacy (mortality from cardiovascular diseases, nonfatal myocardial infarction rate and / or cardiac arrest with subsequent successful resuscitation) by 1.9%. In patients with previous myocardial infarction or coronary revascularization, the absolute risk reduction was 2.2% compared with the placebo group.

Perindopril is used both as monotherapy and as fixed combinations with Indapamide, with Amlodipine.

After oral administration, perindopril is rapidly absorbed from the gastrointestinal tract. Cmax is reached in 1 hour. Bioavailability is 65-70%.

In the process of metabolism, perindopril biotransformed with the formation of an active metabolite - perindoprilat (about 20%) and 5 inactive compounds. Cmax of perindoprilat in plasma is reached between 3 and 5 h after administration. The binding of perindoprilat to plasma proteins is insignificant (less than 30%) and depends on the concentration of the active substance. Vd of free perindoprilat is close to 0.2 l / kg.

Does not accumulate.Repeated administration does not lead to cumulation and T1 / 2 corresponds to the period of its activity.

When taken with meals, perindopril metabolism slows down.

Perindoprilat is excreted by the kidneys; T1 / 2 of its free fraction is 3-5 hours.

In elderly patients, as well as in renal and heart failure, the elimination of perindoprilat slows down.

Prevention of recurrent stroke (combination therapy with indapamide) in patients who have had a stroke or transient cerebral circulation in ischemic type.

Angioedema in history, simultaneous use with aliskiren and aliskiren-containing drugs in patients with diabetes mellitus or renal impairment (GFR

Perindopril is contraindicated for use during pregnancy and lactation (breastfeeding).

Cases of arterial hypotension, syncope, stroke, hyperkalemia, and impaired renal function (including acute renal failure) have been reported in susceptible patients, especially when used concomitantly with drugs that affect RAAS. Therefore, double blockade of RAAS resulting from the combination of an ACE inhibitor with an angiotensin II receptor antagonist or aliskiren is not recommended.

Before starting treatment with perindopril, renal function testing is recommended for all patients.

During treatment with perindopril, the kidney function, the activity of liver enzymes in the blood should be regularly monitored, peripheral blood tests should be carried out (especially in patients with diffuse connective tissue diseases, in patients who receive immunodepressants, allopurinol).Patients with deficiency of sodium and fluids need to correct water and electrolyte disorders before treatment.

(perindopril in the form of tosylate) 10 mg

From the senses: visual disturbances, tinnitus.

On the part of the respiratory system: cough, shortness of breath, bronchospasm, eosinophilic pneumonia, rhinitis.

On the part of the skin and subcutaneous fat: itchy skin, rash, photosensitivity, pemphigus, increased sweating.

The risk of hyperkalemia is increased while the application of perindopril with other drugs that can cause hyperkalemia: aliskiren and aliskirensoderzhaschie drugs, salts of potassium, potassium-sparing diuretics, ACE inhibitors, angiotensin II receptor antagonists, NSAIDs, Heparin, immunopodepressanty such as cyclosporin or tacrolimus, trimethoprim.

Not recommended simultaneous use with aliskiren in patients who do not have diabetes or renal dysfunction, because possible increase in the risk of hyperkalemia, deterioration of kidney function and an increase in the incidence of cardiovascular morbidity and mortality.

In the literature, it has been reported that in patients with established atherosclerotic disease, heart failure or diabetes mellitus with target organ damage, concurrent therapy with an ACE inhibitor and angiotensin II receptor antagonist is associated with a higher incidence of hypotension, syncope, hyperkalemia and deterioration of kidney function (including acute renal failure) compared with the use of only one drug that affects the RAAS. Double blockade (for example, in combination with an ACE inhibitor with an angiotensin II receptor antagonist) should be limited to individual cases with careful monitoring of kidney function, potassium and blood pressure.

Simultaneous use with estramustine can lead to an increased risk of side effects, such as angioedema.

With simultaneous use of drugs lithium and perindopril may be a reversible increase in the concentration of lithium in the blood serum and the associated toxic effects (this combination is not recommended).

Simultaneous use with hypoglycemic drugs (insulin, hypoglycemic agents for oral administration) requires special care, since ACE inhibitors, incl. perindopril, can enhance the hypoglycemic effect of these drugs until the development of hypoglycemia. As a rule, this is observed in the first weeks of simultaneous therapy in patients with impaired renal function.

Baclofen enhances the antihypertensive effect of perindopril, while the application may require a dose adjustment of the latter.

In patients taking diuretics, especially those removing fluid and / or salt, at the beginning of perindopril therapy, an excessive decrease in blood pressure can be observed, the risk of which can be reduced by discontinuing the diuretic, replenishing the loss of fluid or salt before starting perindopril, and also using perindopril in low doses. the initial dose with a further gradual increase.

In chronic heart failure in the case of the use of diuretics, perindopril should be used in a low dose,perhaps after reducing the dose of a simultaneously used potassium-sparing diuretic. In all cases, renal function (creatinine concentration) should be monitored in the first weeks of use of ACE inhibitors.

The use of eplerenone or spironolactone in doses of 12.5 mg to 50 mg / day and ACE inhibitors (including perindopril) in low doses: in the treatment of heart failure of the II-IV functional class according to the NYHA classification with the left ventricular ejection fraction

The simultaneous use of perindopril with NSAIDs (acetylsalicylic acid in a dose that has an anti-inflammatory effect, COX-2 inhibitors and non-selective NSAIDs) can lead to a decrease in the antihypertensive effect of ACE inhibitors. The simultaneous use of ACE inhibitors and NSAIDs can lead to a deterioration in renal function, including the development of acute renal failure, and an increase in serum potassium, especially in patients with reduced kidney function. Use this combination with care in elderly patients. Patients should receive an adequate amount of fluid; It is recommended to carefully monitor renal function, both at the beginning and during the treatment process.

Simultaneous use of gliptin (linagliptin, saxagliptin, sitagliptin, vitagliptin) with ACE inhibitors (incl.with perindopril) may increase the risk of angioedema due to the suppression of the activity of dipeptidyl peptidase IV glyptin.

The simultaneous use of perindopril with tricyclic antidepressants, antipsychotics and general anesthesia drugs can lead to increased antihypertensive action.

Sympathomimetics can weaken the antihypertensive effect of perindopril.

When using ACE inhibitors, incl. perindopril, in patients receiving IV gold medication (sodium aurothiomalate), a symptom complex was described, in which there was a flushing of the skin of the face, nausea, vomiting, arterial hypotension.