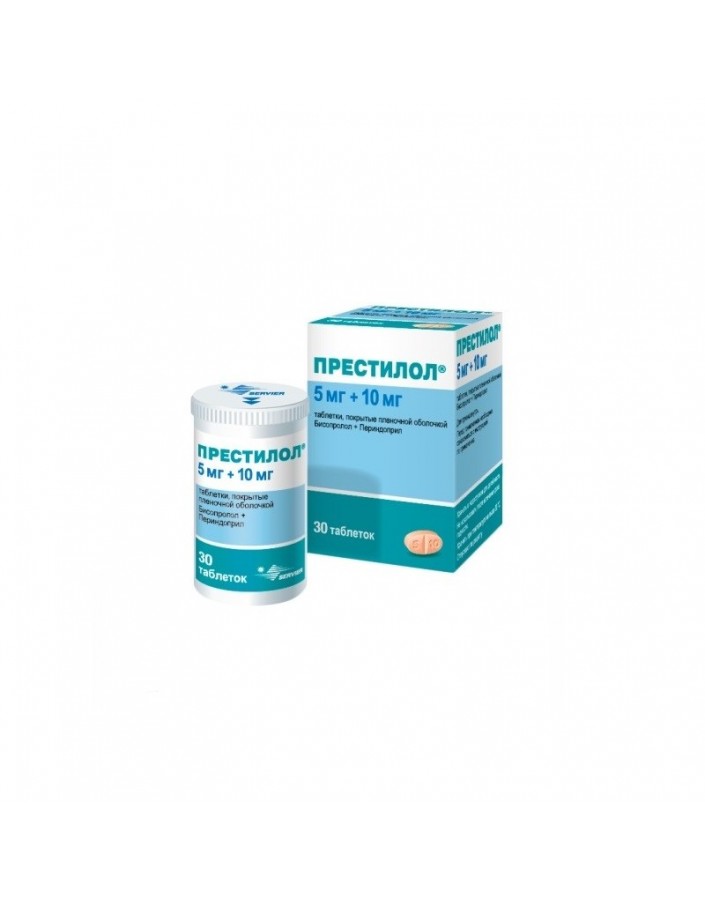 Bisoprolol is a highly selective blocker β1-adrenoreceptors that do not have a stimulating and appropriate membrane stabilizing effect. It exhibits only a slight affinity for β2- adrenergic receptors of the smooth muscles of the bronchi and blood vessels, as well as β2-adrenoreceptors involved in metabolic regulation. Thus, Bisoprolol in general does not affect the resistance of the respiratory tract and metabolic processes in which β is involved.2-adrenoreceptors. Selective effect of bisoprolol on β1-adrenoreceptors are maintained outside the range of therapeutic doses.

Since ACE inactivates bradykinin, ACE suppression is accompanied by an increase in the activity of both the circulating and tissue kallikrein-kinin system, and the prostaglandin system is also activated. It is possible that this effect is part of the mechanism of the antihypertensive effect of ACE inhibitors, as well as the mechanism for the development of some side effects (for example, cough).

Perindopril has a therapeutic effect due to the active metabolite perindoprilat. Other metabolites have no inhibitory effect on ACE in vitro.

The maximum effect is noted in 3-4 hours after taking the drug. Since t1/2 is 10-12 hours, bisoprolol is effective for 24 hours. The maximum antihypertensive effect of bisoprolol is usually achieved after 2 weeks.

When taken once by patients with IHD without chronic heart failure (CHF), bisoprolol decreases heart rate and stroke volume, which leads to a decrease in cardiac output and oxygen consumption. With continued use, the initially elevated peripheral vascular resistance decreases. Reduction of renin activity in plasma is considered as one of the mechanisms of action underlying the antihypertensive effect of beta-blockers.

Bisoprolol reduces the sympatho-adrenergic response by blocking the heart's β-adrenoreceptors.This leads to a decrease in heart rate and contractility of the myocardium, resulting in a decrease in myocardial oxygen demand, which is the desired effect in angina associated with coronary artery disease.

Perindopril is a treatment for hypertension of any severity. Against the background of its use, there is a decrease in both systolic and diastolic blood pressure in the "lying" and "standing" positions.

Perindopril reduces OPSS, which leads to a decrease in blood pressure and improvement of peripheral blood flow without changing heart rate.

As a rule, Perindopril increases renal blood flow, while GFR usually does not change.

In a study involving patients with CHF III and IV FC according to the NYHA classification, having an ejection fraction of <35% according to echocardiography, a decrease in total mortality from 17.3% to 11.8% was shown. There was a decrease in sudden deaths and a reduction in the number of episodes associated with heart failure requiring hospitalization. As a result, a significant improvement in the functional status of CHF according to the NYHA classification was shown.

The maximum antihypertensive effect develops after 4-6 hours after a single ingestion and persists for at least 24 hours: residual effects are observed, which make up approximately 87-100% of the maximum effects. Reducing blood pressure occurs quickly.In patients who respond to treatment, the normalization of blood pressure is achieved within a month and is maintained without the development of tachyphylaxis.

Termination of therapy does not cause the effect of "rebound".

Perindopril has a vasodilating effect. It helps to restore the elasticity of large arteries and reduce the ratio of wall thickness: clearance for small arteries.

Adjuvant therapy with thiazide diuretics causes synergy by summing up effects. The combination of an ACE inhibitor and thiazide diuretic also reduces the risk of hypokalemia associated with diuretic treatment.

The efficacy of perindopril in patients over 18 years of age with stable ischemic heart disease without clinical symptoms of CHF was studied during a 4-year study. 90% of study participants had previous myocardial infarction and / or revascularization procedure. The majority of patients received drugs based on standard therapy, including platelet aggregation inhibitors, lipid-lowering drugs and beta-blockers. The main criterion of effectiveness was a composite endpoint, including cardiovascular mortality, nonfatal myocardial infarction, and / or cardiac arrest with successful resuscitation.

There is evidence of clinical studies of combination therapy with the use of an ACE inhibitor and an angiotensin II receptor antagonist (APA II).

Research data did not reveal a significant positive effect of combination therapy on the occurrence of renal and / or cardiovascular events and on mortality rates, while the risk of hyperkalemia, acute renal failure and / or arterial hypotension increased compared with monotherapy.

Taking into account the similar intragroup pharmacodynamic properties of ACE inhibitors and ARA II, these results can be expected for the interaction of any other drugs, representatives of the ACE inhibitor classes and ARA II.

Therefore, ACE inhibitors and ARA II should not be used simultaneously in patients with diabetic nephropathy.

There is evidence from a clinical study examining the effect of adding aliskiren to standard therapy with an ACE inhibitor or ARA II in patients with type 2 diabetes and chronic kidney disease or a cardiovascular disease, or with a combination of these diseases. The study was terminated early due to the increased risk of adverse outcomes. Cardiovascular death and stroke were observed more frequently in the group of patients receiving aliskiren, compared with the placebo group; also adverse events and serious adverse events of particular interest (hyperkalemia, hypotension and renal dysfunction) were recorded more often in the aliskiren group than in the placebo group.

Data on the safety and efficacy of the drug Prestirol® children are absent.

Bisoprolol is almost completely (> 90%) absorbed from the gastrointestinal tract. Due to the insignificant metabolism at the “first pass” through the liver (approximately 10%), its bioavailability after oral administration is approximately 90%.

Vd equal to 3.5 l / kg.The binding of bisoprolol to plasma proteins is approximately 30%.

Bisoprolol is eliminated from the body in two ways. 50% is metabolized in the liver to form inactive metabolites, which are then excreted by the kidneys. The remaining 50% is excreted by the kidneys in unchanged form. Total clearance is approximately 15 l / h. T1/2 from the blood plasma is 10-12 h, which ensures the preservation of the effect within 24 h after administration of 1 time / day.

The pharmacokinetics of bisoprolol is linear and does not depend on age.

Since the excretion occurs through the kidneys and liver equally, dose adjustment for patients with impaired liver function or renal failure is not required. Pharmacokinetics in patients with CHF and impaired liver or kidney function has not been studied. In patients with CHF III FC according to the NYHA classification, the concentration of bisoprolol in the blood plasma is higher, and T1/2 has a longer duration compared with similar indicators in healthy volunteers. Cmax in the blood plasma in the equilibrium state is 64 ± 21 ng / ml when taking a daily dose of 10 mg, and T1/2 makes 17 ± 5 h.

Linearity. It was shown that the relationship between the dose of perindopril and its concentration in plasma is linear.

Vdfree perindoprilat is approximately 0.2 l / kg. The relationship of perindoprilat with plasma proteins, mainly with ACE, is 20% and is dose-dependent.

Eating reduces the rate of conversion of perindopril to perindoprilat and, consequently, its bioavailability, so perindopril arginine should be taken orally 1 time / day in the morning before meals.

Perindoprilat is excreted by the kidneys, and the final T1/2 free fraction is approximately 17 hours, as a result, the equilibrium state is reached within 4 days.

Removal of perindoprilat is delayed in elderly patients, as well as in patients with heart or renal failure. In renal failure, it is desirable to adjust the dose depending on the degree of renal dysfunction (CC).

The pharmacokinetics of perindopril in patients with cirrhosis is altered in nature: the hepatic clearance of the parent molecule is reduced by 2 times. However, the amount of perindoprilat formed is not reduced, and, therefore, dose adjustment is not required (seesections "Dosing regimen" and "Special instructions").

- treatment of arterial hypertension and / or stable coronary artery disease and / or stable chronic heart failure with reduced left ventricular systolic function in adult patients who have been treated with bisoprolol and perindopril in appropriate doses.

Inside, on 1 tablet 1 time / days in the morning before meal.

Patients with impaired renal function (See sections "Special instructions" and "Pharmacokinetics") drug Prestilol® appointed with regard to the values ​​of QC, as indicated in the table.