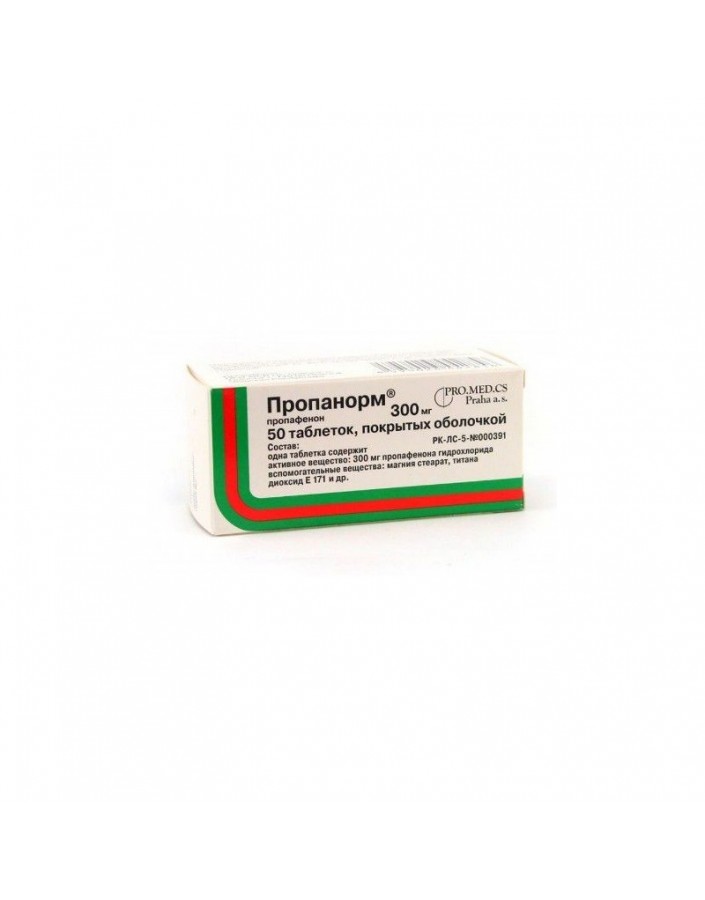 In the blister of 10 tablets. In packing 5 blisters.

It has a weak α-adrenergic blocking activity (corresponds to approximately 1/40 of the activity of propranolol) and m-anticholinergic blocking effect. The antiarrhythmic effect is based on local anesthetic and direct membrane-stabilizing effects on myocardiocytes, as well as on the blockade of adrenergic β-adrenoreceptors and Calcium channels.

Local anesthetic effect approximately corresponds to the activity of procaine.

Propafenone, blocking fast sodium channels, causes a dose-dependent decrease in the depolarization rate and inhibits the action potential phase 0 and its amplitude in Purkinje fibers and contractile fibers of the ventricles, inhibits automatism.Slows down the purkinje fibers. Lengthens the time of the sinoatrial node and atria. With the use of propafenone, the PQ interval is extended and the QRS complex is expanded (from 15 to 25) on the ECG, as well as the AH and HV intervals on the histogram. By slowing down, the drug lengthens the effective refractory period in the atria, AV node, additional bundles, and, to a lesser extent, ventricles. No significant changes in the QT interval are observed. Electrophysiological effects are more pronounced in ischemic than in normal myocardium. It has a negative inotropic effect, which usually manifests itself when the ejection fraction of the left ventricle drops below 40%.

The effect of the drug begins 1 hour after ingestion, reaches a maximum after 2-3 hours and lasts 8-12 hours.

- Severe forms of chronic heart failure (decompensated), uncontrolled chronic heart failure.
- Cardiogenic shock (with the exception of arterial hypotension due to tachycardia, and antiarrhythmic shock).
- Severe bradycardia.
- Severe arterial hypotension.
- Sinoatrial blockade, violation of intraatrial conduction.
- Blockade of the bundle of His.
- Intraventricular bifascicular block and AV block II and III degree (without installing a pacemaker).
- SSSU.
- Syndrome of "tachycardia-bradycardia".
- Myocardial infarction.
- Lactation period (breastfeeding).
- Children and adolescents under 18 years of age (efficacy and safety have not been established).
- Digoxin intoxication.
- Hypersensitivity to the drug.

Precautions should be prescribed the drug in the following cases:

- COPD.
- Myasthenia gravis (incl. Myasthenia gravis).
- Heart failure (ejection fraction less than 30%).
- Cardiomyopathy.
- Arterial hypotension.
- Hepatic cholestasis.
- Hepatic and / or renal failure.
- Electrolyte abnormalities (must be corrected before the appointment of propafenone).
- Patients over the age of 70 years.
- Patients with permanent or temporary pacemaker.
- Simultaneous appointment with other antiarrhythmic drugs of similar action.

The use of propafenone during pregnancy, especially in the first trimester, is possible only when the expected benefit to the mother outweighs the potential risk to the fetus.

The dosage regimen is set individually and adjusted by the doctor.

The drug is taken after meals.Tablets should be swallowed whole, without chewing, with a small amount of water.

- Use in elderly patients and in patients with a mass less than 70 kg In patients older than 70 years, as well as in patients with a body weight <70 kg, smaller doses are used (the first dose is given in the hospital under the supervision of an ECG and blood pressure).

- On the part of the digestive system: A change in taste, dry mouth, bitter taste in the mouth, nausea, loss of appetite, a feeling of heaviness in the epigastrium, constipation or diarrhea; rarely - liver dysfunction, cholestatic jaundice, cholestasis.

- From the side of the central nervous system: Headache, dizziness; rarely - blurred vision, diplopia, convulsions.

- On the part of the blood system: Leukopenia, agranulocytosis, increased bleeding time, thrombocytopenia, the appearance of antinuclear antibodies.

During the course of treatment, especially at the beginning of therapy, ECG monitoring is necessary.

Treatment is recommended to begin in the hospital, since the increased risk of arrhythmogenic effects associated with the use of propafenone.

Propanorm should be used under the control of electrolyte balance of blood (especially potassium concentration) and ECG; periodically, liver transaminase activity should be determined.

In the treatment of ventricular arrhythmias, propafenone is more effective than antiarrhythmic drugs of classes IA and IB.

Indications and dose especially carefully need to be determined for patients with an installed pacemaker.

It is necessary to conduct clinical and laboratory monitoring of patients undergoing long-term treatment with anticoagulants and hypoglycemic drugs, while using propanorm.

If during the treatment there is a sinoatrial blockade or AV block of the III degree, or often repeated beats, then the treatment must be interrupted.

Given the possibility of proarrhythmogenic effects, the drug is recommended to be used only for its intended purpose and under medical supervision.

- Application for violations of liver function: In patients with liver failure, the bioavailability of propafenone is increased by 70%, in such patients it is recommended to reduce the dose and conduct regular monitoring of laboratory parameters. In case of abnormal liver function (cumulation is possible) Propanorm is used in doses that make up 20-30% of the usual.

- Impact on the ability to drive motor vehicles or control mechanisms During the period of treatment, it is necessary to refrain from driving motor vehicles and practicing potentially hazardous activities that require high concentration of attention and quickness of psychomotor reactions.

You can not combine propanorm with Lidocaine , because enhanced cardiodepressive effect.

With simultaneous use of propafenone increases the concentration of propranolol, Metoprolol , digoxin (increases the risk of glycoside intoxication), indirect anticoagulants, cyclosporine in plasma.

With simultaneous use of propafenone enhances the effect of Warfarin (by blocking the metabolism).

With simultaneous use with beta-blockers, tricyclic antidepressants and may increase antiarrhythmic action.

With simultaneous use with local anesthetics increases the risk of damage to the central nervous system.

Zimetidin and quinidine, slowing down the metabolism, increase the concentration of propafenone in plasma by 20%, rifampicin - reduces.

When used concomitantly with propafenone, Amiodarone increases the risk of developing pirouette tachycardia.

Drugs that inhibit the sinoatrial node and AV node and have a negative inotropic effect, while used with propafenone increase the risk of side effects.

Drugs that inhibit bone marrow hematopoiesis, while used with propafenone, increase the risk of myelosuppression.

With a single dose of 2 times the daily dose, symptoms of intoxication may appear after 1 h, and a maximum after a few hours.