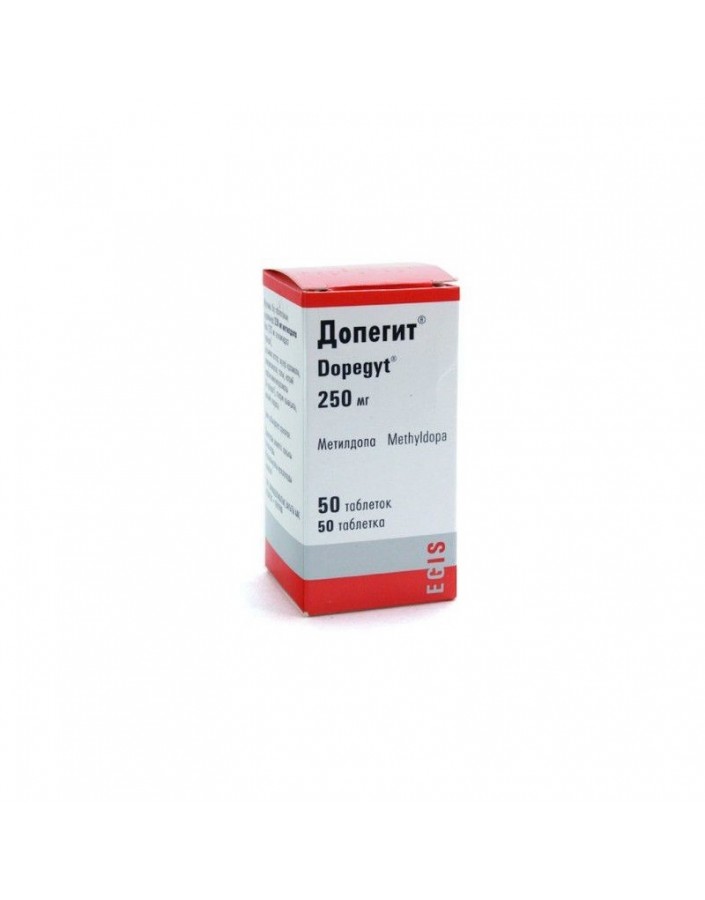 Tablets are taken orally before or after meals. Dosing regimen set individually.

Standard maintenance dose of Dopegyt® makes 0.5-2 g / day. This dose is divided into 2-4 doses. The maximum daily dose of the drug should not exceed 3 g. In cases where the background of taking the drug in a dose of 2 g / day is not sufficiently effective reduction in blood pressure, it is recommended to combine Dopegyt® with other antihypertensive drugs. After 2-3 months of therapy, tolerance to methyldopa can develop. Effective reduction of blood pressure can be achieved by increasing the dose of the drug or the concomitant use of diuretics. After 48 h after cessation of therapy with the drug Dopegyt®BP usually returns to baseline. The “rebound effect” is not observed.

Drug Dopegyt® can be prescribed to patients who are already receiving therapy with other antihypertensive drugs, subject to the gradual withdrawal of these drugs. In such cases, the initial dose of the drug Dopegyt® should not exceed 500 mg / day. Increasing the dose is carried out as needed, at intervals of at least 2 days.

Elderly patients are more likely to have fainting. This may be due to increased susceptibility to the drug and a pronounced atherosclerotic vascular lesion. The development of fainting can be avoided by reducing the dose of the drug Dopegyt®.

Methyldopa is removed from the body during dialysis, so it is recommended to use an additional dose of the drug 250 mg to prevent an increase in blood pressure after a hemodialysis session.

At the beginning of therapy with the drug Dopegyt®, as well as increasing the dose of the drug may experience transient sedative effects, headache, general weakness and increased fatigue.

In each of these categories, unwanted effects are presented in descending order of severity.

Peripheral edema and weight gain usually regress during diuretic therapy. If the swelling is increasing or signs of heart failure appear, the drug should be stopped.

On the part of the respiratory system: individual cases - nasal congestion.

Musculoskeletal system: individual cases - mild pain in the joints with or without swelling, myalgia.

On the part of the endocrine system: individual cases - hyperprolactinemia, gynecomastia, galactorrhea, amenorrhea.

- a history of liver disease (in patients receiving methyldopa);

- children's age up to 3 years (for this dosage form);

WITH caution the drug should be prescribed for renal failure (dose adjustment is required), diencephalic syndrome, elderly patients and children over the age of 3 years.

According to the results of clinical studies after the use of methyldopa in the II and III trimesters of pregnancy, there were no signs of damage to the fetus or newborn. Since there were no adequate and strictly controlled studies in the third trimester of pregnancy, it is recommended to use the drug only after a careful comparison of the expected benefits of therapy for the mother and the potential risk to the fetus.

A study of children born to mothers who took methyldopa after the 26th week of pregnancy did not reveal any adverse effects of the drug. Pregnant women who took the drug in the third trimester, the fetus was better than women who do not take the drug.

Methyldopa is excreted in breast milk, therefore, it is recommended to prescribe the drug during lactation only after careful comparison of the expected benefits to the mother and the potential risk to the baby.

Contraindicated in acute hepatitis, cirrhosis of the liver, patients with a history of liver disease, developed in patients receiving methyldopa.

In patients with a history of liver disease or dysfunction, this drug should be administered with extreme caution.

Methyldopa is removed from the body during dialysis, so it is recommended to use an additional dose of the drug 250 mg to prevent an increase in blood pressure after a hemodialysis session.

Contraindicated in children under 3 years.

Elderly patients are more likely to have fainting. This may be due to increased susceptibility to the drug and a pronounced atherosclerotic vascular lesion.The development of fainting can be avoided by reducing the dose of the drug Dopegyt®.

In rare cases, patients taking methyldopa developed hemolytic anemia. When signs of anemia appear, it is necessary to determine the concentration of hemoglobin and hematocrit. If anemia is confirmed, the degree of hemolysis should be further evaluated. In case of development of hemolytic anemia, treatment with the drug Dopegyt® need to stop. After cessation of therapy (with or without corticosteroids), it is usually possible to quickly achieve remission. However, in rare cases, deaths were observed. Taking the drug Dopegyt® contraindicated in patients with hemolytic anemia that developed during therapy with this drug.

In some patients, for a long time taking the drug Dopegyt®The positive Coombs test is determined. According to reports by various researchers, the prevalence of this reaction varies from 10 to 20%. A positive Coombs test is rarely observed during the first 6 months of therapy. If this phenomenon did not develop during the first 12 months of therapy, then its further detection is unlikely. The prevalence of a positive Coombs test is dose-dependent. Rarely, this phenomenon is observed in patients taking the drug at a dose of 1000 mg / day or less. The Coombs test, positive in patients receiving methyldopa, becomes negative a few weeks or months after discontinuation of therapy with the drug.Before starting treatment, as well as on the 6th and 12th month of therapy, it is recommended to perform a general blood test and a direct Coombs test.

The identification of a positive Coombs test in the past or against the background of the therapy being conducted is not in itself a contraindication to the use of the drug Dopegyt.®. In cases where a positive direct Coombs test is detected while taking the drug, it is necessary to exclude the presence of hemolytic anemia in the patient and determine the clinical significance of this phenomenon.

In some patients, fever was observed during the first three weeks of drug therapy, which was sometimes accompanied by eosinophilia or increased activity of hepatic transaminases. In addition, taking methyldopa may be accompanied by the development of jaundice. Jaundice usually appears during the first 2–3 months of therapy. In some cases, cholestasis was confirmed against the background of jaundice. Very rarely, patients developed fatal necrotic hepatitis. A liver biopsy performed in several patients with impaired function of this organ showed microscopic focal necrosis characteristic of drug hypersensitivity. Before you start taking the drug Dopegyt®, at 6 and 12 weeks of treatment, as well as at any time when an unexplained fever appears, it is recommended to determine the activity of hepatic transaminases and complete blood count with a leukocyte formula.

When fever, jaundice, or increased activity of hepatic transaminases occur, the drug Dopegyt® must stop immediately. If the appearance of these symptoms is associated with hypersensitivity to methyldopa, then after discontinuation of the drug, the fever will disappear, and functional liver tests will return to normal values. Resuming the drug in these patients is not recommended. Patients with liver disease in the history of drug therapy Dopegyt® should be carried out with extreme caution.

Patients taking Dopegyt®may require lower doses of anesthetics. With the development of hypotension during general anesthesia, it is recommended to use vazopressor therapy. Adrenergic receptors do not lose their sensitivity during therapy with methyldopa.

In some patients taking methyldopa, peripheral edema appears and body weight increases. These side effects are easily eliminated with diuretics. With an increase in edema and the appearance of symptoms of heart failure, drug therapy Dopegyt® need to stop.

Since methyldopa is removed from the body through dialysis, an increase in blood pressure levels can be observed after the end of the session.

In patients with bilateral lesion of cerebral vessels (cerebrovascular disease), methyldopa therapy may be accompanied by involuntary choreoathetotic movements. In such cases, drug therapy must be discontinued.

Drug Dopegyt® must be used with great caution in the treatment of patients with hepatic porphyria and their close relatives.

Therapy drug Dopegyt® may affect the results of measuring the concentration of uric acid (using phosphorus-tungsten reagent), creatinine (using alkaline picrate) and AST (by the colorimetric method) in blood serum. The effect of methyldopa therapy on the spectrophotometric analysis of AST concentration was not reported.

During the treatment of methyldopa, false-positive results of determining the content of catecholamines in the urine by the fluorescent method can be obtained, which complicates the diagnosis of pheochromocytoma. At the same time, methyldopa has no effect on the assessment of the concentration of vanillyl almond acid in the urine.

In rare cases, the air in the urine of patients taking methyldopa may darken. This effect is associated with the decomposition of methyldopa and its metabolites. While taking the drug Dopegyt® should not drink alcoholic beverages.

Therapy drug Dopegyt® may be accompanied by sedative effects, which are usually transient in nature and develop at the beginning of treatment or with an increase in the dose of the drug. With the development of such effects, patients should not carry out activities that require increased attention, for example, to drive vehicles or machinery.

Treatment: gastric lavage, vomiting stimulation can reduce the amount of the drug absorbed. Control of heart rate, bcc, water and electrolyte balance, bowel and kidney function, as well as the brain is necessary. If necessary, you can enter sympathomimetics (for example, epinephrine).There is no specific antidote.

Dopegit® can not be used simultaneously with MAO inhibitors.

Simultaneous use with the following drugs requires special care.

The drug should be stored out of the reach of children at a temperature of 15 ° to 25 ° C.