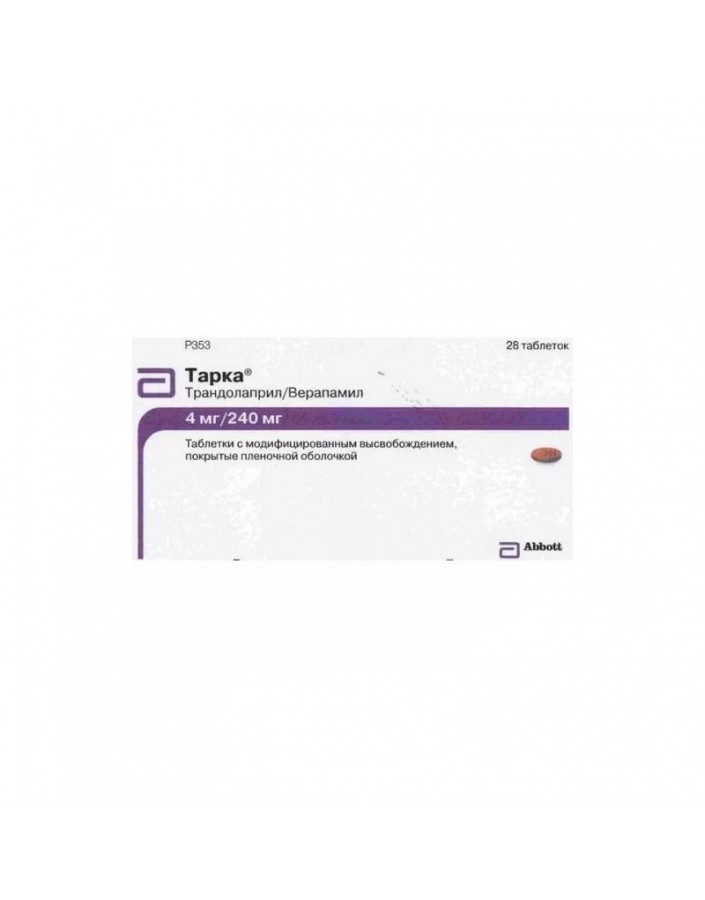 Children: Trandolapril pharmacokinetics has not been studied in patients under the age of 18 years.

Race: Pharmacokinetic differences in members of different races have not been studied.

Hepatic insufficiency: Patients with mild and moderate alcoholic liver cirrhosis had tradolapril and trandolaprilat concentrations in the blood plasma after ingestion were 9 and 2 times higher than in healthy individuals, but the degree of suppression of ACE activity did not change. Patients with hepatic impairment should use lower doses.

More than 90% of orally administered verapamil is absorbed. The average bioavailability is 22%, after repeated administration may increase up to 30%.

Eating does not affect the bioavailability of verapamil.

The average time to reach peak plasma concentration is 4–15 hours. The peak concentration of norverapamil in the blood plasma is reached approximately 5–15 hours after dosing.

Binding of verapamil to plasma proteins is approximately 90%.

The half-life after repeated administration is 8 hours. 3-4% of the administered dose is excreted by the kidneys in an unchanged condition.The metabolite is excreted in the urine (70%) and feces (16%).

Children: information on pharmacokinetics in children is limited. After intravenous administration, the average half-life of verapamil was 9.17 hours, and the average clearance was 30 l / h, whereas in an adult patient with a body weight of 70 kg it was 70 l / h. Concentration in the blood plasma in a state of equilibrium is somewhat lower after the drug is taken orally in children as compared with adults.

The elderly: with aging, the pharmacokinetics of verapamil changes in patients suffering from arterial hypertension. The elimination half-life may increase in elderly people. It is established that the effect of verapamil does not depend on the age of the patient.

Renal failure: In comparative studies in patients with end-stage renal failure and in healthy individuals, the effect of renal dysfunction on verapamil pharmacokinetics has not been established. Verapamil and norverapamil are slightly excreted by hemodialysis.

Tarka is a fixed combination of an ACE inhibitor, trandolapril and a calcium antagonist, verapamil.

Trandolapril blocks the plasma renin-angiotensin-aldosterone system (RAS), which causes a decrease in plasma angiotensin II levels and leads to a decrease in vasopressor activity and a decrease in aldosterone secretion. Although the latter decrease is not significant, a slight increase in serum potassium concentration may occur along with loss of sodium and fluid. Trandolapril also contributes to peripheral vasodilation by activating the prostaglandin system. In patients with arterial hypertension, the use of ACE inhibitors leads to a decrease in blood pressure both in the prone position and in the standing position, about the same, without a compensatory increase in heart rate. Peripheral arterial resistance decreases without change or with an increase in cardiac output.

The antihypertensive effect of trandolapril is established 1 hour after the dose has been taken and lasts for 24 hours, without affecting the circadian rhythm of the arterial pressure.

The ALTITUDE study (Aliskiren Trial in Type 2 Diabetes Using Cardiovascular and Renal Disease Endpoints) - a study of aliskiren in type 2 diabetes mellitus using cardiovascular and renal lesions as the end pointswas developed to explore the benefits of adding aliskiren to standard therapy from an ACE inhibitor or angiotensin-II receptor blocker in patients with type 2 diabetes with chronic kidney disease or cardiovascular disease, or both. This study was prematurely completed due to an increased risk of undesirable outcomes. The frequency and deaths caused by cardiovascular diseases and stroke in numerical terms were higher in the aliskiren group than in the placebo group; serious adverse events (hyperkalemia, hypotension, and renal dysfunction) were more frequently reported in the aliskiren group than in the placebo group.

- Essential arterial hypertension in patients in whom blood pressure is normalized with trandolapril and verapamil separately in the same doses, or with inadequate control of blood pressure when using only one of the active components of the drug.

Adults are recommended to use 1 pill 1 time per day.

Children: the safety and efficacy of the drug Tarkak in children and adolescents has not been established. Therefore, the use in this age group is not recommended.

Elderly people: some elderly patients may have a more pronounced effect of lowering blood pressure due to higher systemic bioavailability compared with younger patients suffering from arterial hypertension.

The pill should be swallowed whole with water, preferably after breakfast.

- bronchial asthma, shortness of breath, swelling of the mucous membrane of the paranasal sinuses

Unknown (cannot be determined based on available data)

angioedema of the intestines *

- back pain, pain in the limbs, osteoarthritis, muscle cramps

- use in children and adolescents (under 18)

- angioedema associated with treatment with ACE inhibitors in history

- sick sinus syndrome in patients without a functioning artificial pacemaker

- heart failure with a reduced ejection fraction of less than 35% and / or pulmonary wedging pressure above 20 mm Hg.

- second and third trimester of pregnancy and lactation

In vitro metabolism studies of verapamil hydrochloride have shown that it is metabolized by cytochrome P450, CYP3A4 , CYP1A2, CYP2C8, CYP2C9 and CYP2C18. Verapamil manifests itself as an inhibitor of CYP3A4 enzymes and P-glycoprotein (P-gp). Clinically important interactions have been reported with CYP3A4 inhibitors, which caused an increase in plasma levels of verapamil, while CYP3A4 inducers caused a decrease in plasma levels of verapamil, therefore monitoring for interaction with other drugs is necessary.

Colchicine is a substrate of CYP3A and transport P-glycoprotein (P-gp).Verapamil is known to be a CYP3A and P-gp inhibitor. With simultaneous use of verapamil and colchicine, inhibition of P-gp and / or CYP3A with verapamil may cause an increase in the exposure of colchicine. Combined use is not recommended.

Hemodialysis: Anaphylactoid reactions have been reported on high-density polyacrylonitrile membranes used for hemodialysis in patients using ACE inhibitors. As with other antihypertensive drugs of this chemical class, the use of ACE inhibitors should be avoided in patients on renal dialysis.

Antihypertensive drugs: enhance the hypotensive effect of the drug.

Lithium: The simultaneous use of ACE inhibitors with lithium can cause a lithium delay in the body. In such cases, lithium concentration should be monitored frequently.

Allopurinol, cytostatics or immunosuppressants, systemic corticosteroids, or procainamide: the risk of leukopenia increases.

Cardiodepressants: simultaneous use of verapamil with cardiodepressants (beta-blockers, antiarrhythmic drugs, inhalation anesthetics) can lead to an undesirable additive effect.

Quinidine: reduced clearance of quinidine when administered orally (~ 35%). The simultaneous use of quinidine and oral verapamil in some cases caused arterial hypotension and pulmonary edema in patients with hypertrophic (obstructive) cardiomyopathy. The electrophysiological effects of quinidine and verapamil on atrioventricular conductivity were studied with the participation of 8 patients. Verapamil significantly interfered with the effect of quinidine on atrioventricular conductivity. There was a message about an increase in quinidine levels during therapy with verapamil.

Phenobarbital: an increase in the clearance of verapamil after oral administration (approximately 5 times).

Theophylline: a decrease in clearance in oral and systemic use by about 20%, in smokers - by 11%.

Digoxin: the simultaneous use of Digoxin and verapamil led to an increase in the concentration of digoxin in the blood plasma by 50-75%, which required a reduction in the dose of digoxin.

Imipramine: an increase in imucramine AUC (~ 15%) without affecting the level of its active metabolite, desipramine.

Buspirone: an increase in AUC and Smah Buspirone approximately 3.4 times.

Midazolam: an increase in the AUC of midazolam by about 3 times and Cmax - by about 2 times.

Clarithromycin, Erythromycin , telithromycin: possible increase in the level of verapamil.

Rifampicin: decrease in AUC of verapamil (~ 97%), Cmax (~ 94%), bioavailability after oral administration (~ 92%), may reduce the hypotensive effect.

Nonsteroidal anti-inflammatory drugs (NSAIDs): the use of NSAIDs can lead to a weakening of the hypotensive effect of ACE inhibitors. When adding or canceling NSAIDs, it is necessary to strengthen blood pressure control in patients taking Trandolapril. In addition, it is described that NSAIDs and ACE inhibitors exhibit an additive effect on the increase in serum potassium and a decrease in renal function. Usually these effects are reversible and are observed, as a rule, in patients with impaired renal function.

Sympathomimetics: can reduce the antihypertensive effects of ACE inhibitors. You should carefully monitor the patient's condition to ensure that the desired clinical effect is achieved.

Verapamil can increase the concentration of carbamazepine, cyclosporine and theophylline in the blood plasma, thereby increasing the risk of toxicity of these funds.

Everolimus, sirolimus, tacrolimus: possible increase in the level of these drugs in the blood plasma.

Rifampicin, phenytoin and phenobarbital: reduce the concentration of verapamil in the blood plasma.

HMG-CoA reductase inhibitors: an increased level of Simvastatin (metabolized by CYP3A4) has been reported in the serum when used simultaneously with verapamil. The simultaneous use of verapamil and high doses of simvastatin reportedly increased the risk of myopathy / rhabdomyolysis. Treatment with HMG-CoA reductase inhibitors (such as simvastatin, Atorvastatin or lovastatin) in patients who take verapamil should be started with the lowest possible dose and titrated in the direction of its increase. If verapamil treatment should be prescribed to patients who are already taking an HMG-CoA reductase inhibitor (simvastatin, atorvastatin or lovastatin), the dose of statin should be reduced and set accordingly to the concentration of cholesterol in the blood serum.

Atorvastatin: may increase atorvastatin levels.Atorvastatin increases the AUC of verapamil by approximately 42.8%.

Fluvastatin, pravastatin and rozuvastatin are not metabolized by cytochrome CYP3A4 and do not interact with verapamil.

Diuretic Therapy: Combination with diuretics or other antihypertensive drugs may enhance the antihypertensive effect of trandolapril. In patients who receive diuretics, especially in violation of water-salt balance, blood pressure may be excessively lowered at the beginning of treatment with ACE inhibitors (see the section "Special Instructions"). The likelihood of an increase in antihypertensive effects with Tarka® can be minimized by stopping diuretic administration before starting treatment with Tarka®. If discontinuation of diuretic therapy is not possible, the initial dose of Tarka® should be reduced.

Antiotensin-II receptor blockers, aliskiren: data from clinical studies have shownthat the double blockade of the renin-angiotensin-aldosterone system (RAAS) through the combined use of ACE inhibitors, angiotensin-II receptor blockers or aliskiren is associated with a higher incidence of side effects such as hypotension, hyperkalemia and decreased kidney function (including acute renal failure) than the use of a single agent that affects the RAAS (see sections "Pharmacodynamics", "Contraindications", "Special Instructions").

Antidiabetic agents: in some cases, especially at the beginning of treatment, patients with diabetes mellitus may need to select a dose of antidiabetic agents or Tarka® due to increased utilization of glucose in the blood.