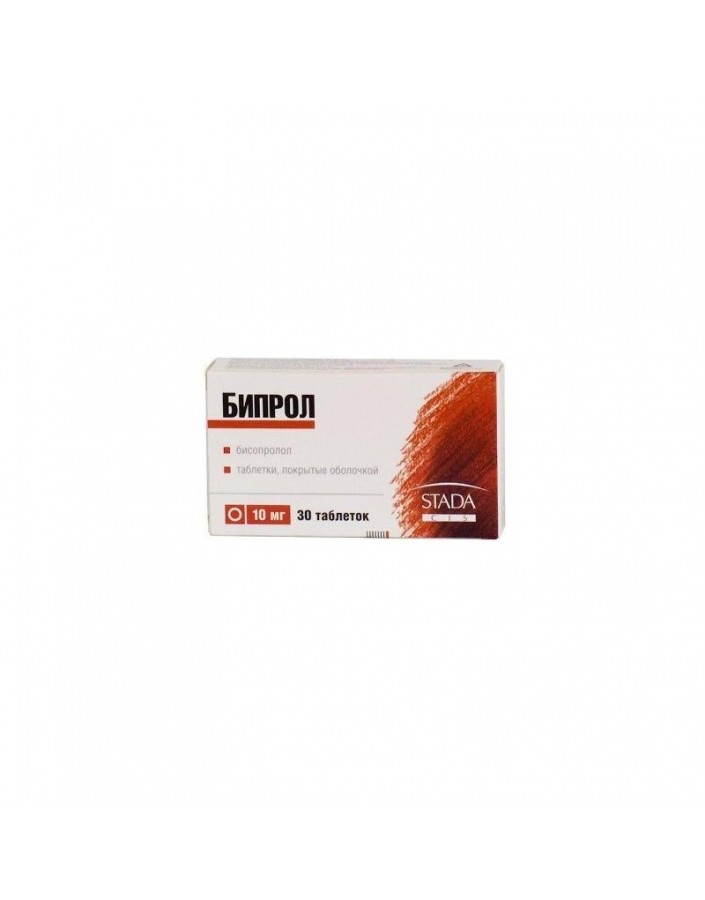 Biprol use during pregnancy and lactation is possible if the benefit to the mother exceeds the risk of side effects in the fetus and child.

The drug should be taken orally, in the morning on an empty stomach, without chewing, 5 mg once. If necessary, increase the dose of Biprol to 10 mg once a day. The maximum daily dose is 20 mg / day.

Monitoring patients taking Biprol should include measuring heart rate and blood pressure, conducting an ECG, and measuring blood glucose in diabetic patients. In elderly patients, it is recommended to monitor renal function.

Symptoms: arrhythmias, ventricular premature beats, severe bradycardia, AV blockade, marked reduction in blood pressure, chronic heart failure, cyanosis of the fingernails and palms of the nails, difficulty breathing, bronchospasm, dizziness, syncope, convulsions.
Treatment: gastric lavage, the appointment of adsorbents. If necessary, carry out symptomatic therapy: with developed AV-blockade in / in the introduction of atropine (1-2 mg), epinephrine or staging a temporary pacemaker; with ventricular extrasystole - lidocaine (I class A drugs are not used). With a decrease in blood pressure, the patient should be in the Trendelenburg position; if there are no signs of pulmonary edema, inject intravenously plasma-substituting solutions; with ineffectiveness - the introduction of epinephrine, dopamine, dobutamine (to maintain chronotropic and inotropic action and eliminate the pronounced decrease in blood pressure). In heart failure, cardiac glycosides, diuretics, glucagon are prescribed; with convulsions - in / in diazepam; with bronchospasm - beta 2 -adrenostimulators inhalation.