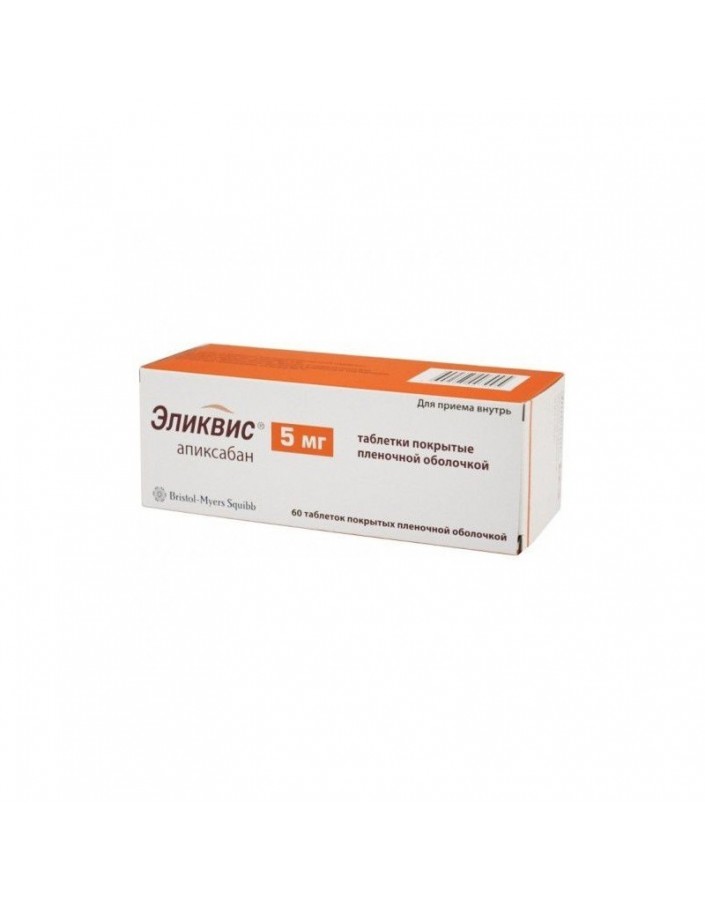 Direct acting anticoagulant is a selective inhibitor of blood coagulation factor Xa.
The mechanism of action of apixaban is to inhibit FXa activity. As a result, apixaban changes the values ​​of the blood coagulation system: it extends the prothrombin time, MHO and activated partial thromboplastin time (APTT). Changes in these indicators when using the drug in a therapeutic dose are minor and individual. Therefore, using them to assess the pharmacodynamic activity of apixaban is not recommended.
Inhibiting FXa activity with apixaban has been proven using a chromogenic test using Heparin Rotachrom. The change in anti-FXa activity is directly proportional to the increase in the concentration of apixaban in the blood plasma, and the maximum values ​​of activity are observed when Cmax reaches apixaban in the blood plasma. The linear relationship between concentration and anti-FXa activity of apixaban is recorded in a wide range of therapeutic doses of the drug. Changes in anti-FXa activity with changes in dose and concentration of apixaban are more pronounced and less variable than blood clotting indicators. The expected maximum and minimum anti-FXa activity of apixaban in the equilibrium state, when applied at a dose of 2.5 mg 2,is 1. MEAT / ml (5/95 percentile - 0.67 IU / ml - 2.4 IU / ml) and 0.84 IU / ml (5/95 percentile –0.37 ME / ml - 1.8 IU / ml), respectively, which correlates with variations this indicator in the interval between doses of the drug (less than 1.6 times). The therapy with apixaban does not require routine monitoring of its concentration in the blood plasma, however, the execution of the Rotachrom anti-FXa test may be useful in deciding whether to continue therapy.
Mechanism of action
Apixaban is a potent direct inhibitor of FXa that reversibly and selectively blocks the active site of the enzyme, intended for oral use. Antithrombin III is not required to realize the antithrombotic effect of apixaban. Apixaban inhibits free and bound FXa, as well as prothrombinase activity. Apixaban does not directly affect platelet aggregation, but indirectly inhibits thrombin-induced platelet aggregation. By inhibiting the activity of FXa, apixaban prevents the formation of thrombin and blood clots.

Suction
Absolute bioavailability of apixaban reaches 50% when used in doses up to 10 mg. Apixaban is rapidly absorbed from the gastrointestinal tract, Cmax is achieved within 3-4 hours after oral administration. Eating does not affect the values ​​of the area under the concentration-time curve (AUC) or Cmax of apixaban. The pharmacokinetics of apixaban for doses up to 10 mg is linear.When taking apixaban in doses higher than 25 mg, the absorption of the drug is limited, which is accompanied by a decrease in its bioavailability. Metabolism indicators of apixaban are characterized by low or moderate inter-and intraindividual variability (the corresponding values ​​of the coefficient of variation are 20% and 30%, respectively).
Distribution
The connection of apixaban with human plasma proteins is approximately 87%, the volume of distribution (Vss) is approximately 21 liters.
Metabolism and excretion
Approximately 25% of the dose taken is excreted as metabolites, the majority through the intestines. Apixaban renal excretion accounts for approximately 27% of its total clearance.
The total clearance of apixaban is approximately 3.3 l / h, T1 / 2 is about 12 hours. O-demethylation and hydroxylation at the 3-oxopiperidinyl residue are the main ways of biotransformation of apixaban. Apixaban is predominantly metabolized by the participation of the CYP3A4 / 5 isoenzyme, and to a lesser extent by the CYP1A2, 2C8, 2C9, 2C19 and 2J2 isoenzymes. Unchanged apixaban is the main substance circulating in human blood plasma, there are no active metabolites circulating in the bloodstream. In addition, apixaban is a substrate of transport proteins, P-glycoprotein 70 and breast cancer resistance protein (BCRP).
Renal dysfunction
Impaired renal function has no effect on Cmax apixaban. However, there was an increase in the concentration of apixaban, which correlated with the degree of decline in kidney function, as measured by creatinine clearance (CK).In persons with impaired lung kidney function (CC - from 51 ml / min to 80 ml / min), medium (CC - from 30 ml / min to 50 ml / min) and severe (CC - from 15 ml / min to 29 ml / min), the AUC values ​​of apixaban in the blood plasma increased by 16%, 29% and 44%, respectively, compared with persons who had normal CC values. At the same time, renal impairment did not have an obvious effect on the relationship between plasma concentration of apixaban and its anti-FXa activity.
Studies of apixaban in patients with creatinine clearance <15 ml / min or on dialysis have not been conducted.
Liver dysfunction
Studies of apixaban in severe liver failure and active pathology of the hepatobiliary system have not been conducted.
In a study of pharmacokinetics and pharmacodynamics of apixaban when it was taken once at a dose of 5 mg in patients with mild and moderate hepatic insufficiency (classes A and B for Child-Pugh, respectively) and healthy volunteers, it was shown that hepatic insufficiency does not affect these indicators. Changes in anti-FXa activity and MHO in patients with moderately severe liver failure and healthy volunteers were comparable.
Use in elderly patients
Older patients (over 65) had higher plasma concentrations of the drug than younger patients: the average AUC was about 32% higher. Dose adjustment of the drug in elderly patients is not required.
Floor
The exposure of apixaban in women was 18% higher than in men. Adjustment of the dose of the drug depending on the gender of the patient is not required.
Race and ethnicity
The results obtained in the framework of phase I studies indicate that there are no significant differences in apixaban pharmacokinetics between representatives of the Caucasoid, Mongoloid, and Negroid races. The results of pharmacokinetics analyzes in various populations performed in the framework of studies that included patients who received apixaban after planned hip or knee replacement were consistent with the results of phase I studies. Dose adjustment of the drug, depending on the race or ethnic origin of the patient is not required.
Body mass
In patients with a body weight of more than 120 kg, the concentration of apixaban in the blood plasma was approximately 30% lower than in patients with a body weight from 65 kg to 85 kg; in patients with a body weight less than 50 kg, this figure was approximately 30% higher. Dose adjustment depending on the patient's body weight is not required.
The dependence of the parameters of pharmacokinetics and pharmacodynamics
The relationship between pharmacokinetic and pharmacodynamic parameters (including anti-FXa activity, MHO, prothrombin time, APTT) of apixaban and its concentration in blood plasma was studied for a wide range of drug doses (from 0.5 mg to 50 mg).It was shown that the relationship between apixaban concentration and FXa activity is best described using a linear model. The dependence of the parameters of pharmacokinetics and pharmacodynamics of apixaban, assessed in patients undergoing planned hip or knee joint replacement, was consistent with that observed in healthy volunteers.

Indications for use of the drug ELIKVIS®

- prevention of venous thromboembolism in patients after planned hip or knee arthroplasty.

Contraindications to the use of the drug ELIKVIS®

- hypersensitivity to the active substance or auxiliary components;
- clinically significant active bleeding;
- liver disease, accompanied by abnormalities in the blood coagulation system and a clinically significant risk of bleeding;
- severe abnormal liver function;
- impaired renal function with a CC of less than 15 ml / min, as well as use in patients on dialysis;
- pregnancy;
- breast-feeding;
- age up to 18 years.
It is not recommended to use apixaban at the same time with drugs that may be associated with the development of serious bleeding.
Precautions: apixaban should be used with caution when performing spinal, epidural or punctures, and in patients receiving systemic therapy potent inhibitors isoenzyme CYP3A4 and P-glycoprotein, such as azole antifungal agents (e.g., Ketoconazole , itraconazole, voriconazole and posaconazole) , HIV protease inhibitors (eg, ritonavir). You should also be careful when using apixaban with powerful inducers of CYP3A4 isoenzyme and P-glycoprotein (in particular, rifampicin, phenytoin, Carbamazepine , phenobarbital or Hypericum perforatum preparations).
Risk of bleeding
The drug is recommended to be used with caution in conditions characterized by an increased risk of bleeding: congenital oracquired blood clotting disorders; exacerbations of gastrointestinal ulcer; bacterial endocarditis; thrombocytopenia; thrombocytopathy; a hemorrhagic stroke in the anamnesis; recent surgery on the brain or spinal cord, as well as on the organs of vision; with severe uncontrolled hypertension.
In addition, caution should be exercised while using apixaban with NSAIDs (including acetylsalicylic acid), due to the fact that these drugs increase the risk of bleeding.
Surgical intervention associated with a hip fracture
In clinical studies, Eliquis was not used in patients undergoing emergency surgery for a hip fracture, so its efficacy and safety in this category of patients has not been studied.

Use of the drug ELIKVIS® during pregnancy and lactation

Caution should be exercised when taking the drug Eliquis patients with mild to moderate hepatic insufficiency (class A or B on Child-Pugh), while dose adjustment is not required. Use of the drug in patients with severe liver failure is not recommended.

Dose adjustment of the drug in elderly patients is not required.

As with the use of other anticoagulants, careful monitoring of patients taking Eliquis for the development of bleeding is necessary. With the development of severe bleeding, Eliquis should be withdrawn. With the development of hemorrhagic complications, it is necessary to cancel the treatment with the drug and perform an examination to identify the source of bleeding. If necessary, appropriate treatment is prescribed, in particular, surgical treatment of hemorrhage or transfusion of fresh frozen plasma.
Performing spinal, epidural anesthesia or punctures in patients receiving Eliquis
When performing spinal or epidural anesthesia or diagnostic puncture of these areas in patients receiving antithrombotic agents for the prevention of thromboembolism,there is a risk of developing epidural or spinal hematomas, which, in turn, may cause persistent or irreversible paralysis. This risk may further increase with the use of an established epidural catheter in the postoperative period or with the simultaneous use of other drugs that affect hemostasis. Installed epidural or subarachnoid catheters should be removed at least 5 hours prior to the first dose of Eliquis.
A similar increase in risk may occur when traumatic or multiple punctures of the epidural or subarachnoid spaces are performed. Frequent monitoring of patients for the development of manifestations of impaired function of the nervous system (in particular, numbness or weakness of the lower extremities, impaired function of the intestine or bladder) is necessary. With the development of such disorders, it is necessary to perform an emergency examination and treatment. Before performing interventions on epidural or subarachnoid spaces in patients receiving anticoagulants, incl. in order to prevent thrombosis, an assessment of the relationship between potential benefits and risks is necessary.
Influence on ability to drive motor transport and management of mechanisms
Eliquis does not have a significant impact on the ability to drive a car and work with mechanisms.

Antidote not known. Overdose increases the risk of bleeding.In controlled clinical trials, apixaban was taken orally by healthy volunteers at doses up to 50 mg / for 3 to 7 days (25 mg, 2, for 7 days or 50 mg, 1 time /, for 3 days), which is 10 times the maximum recommended dose for a person; no clinically significant adverse effects were noted.
In case of overdose of this drug, you can consider the use of Activated carbon .