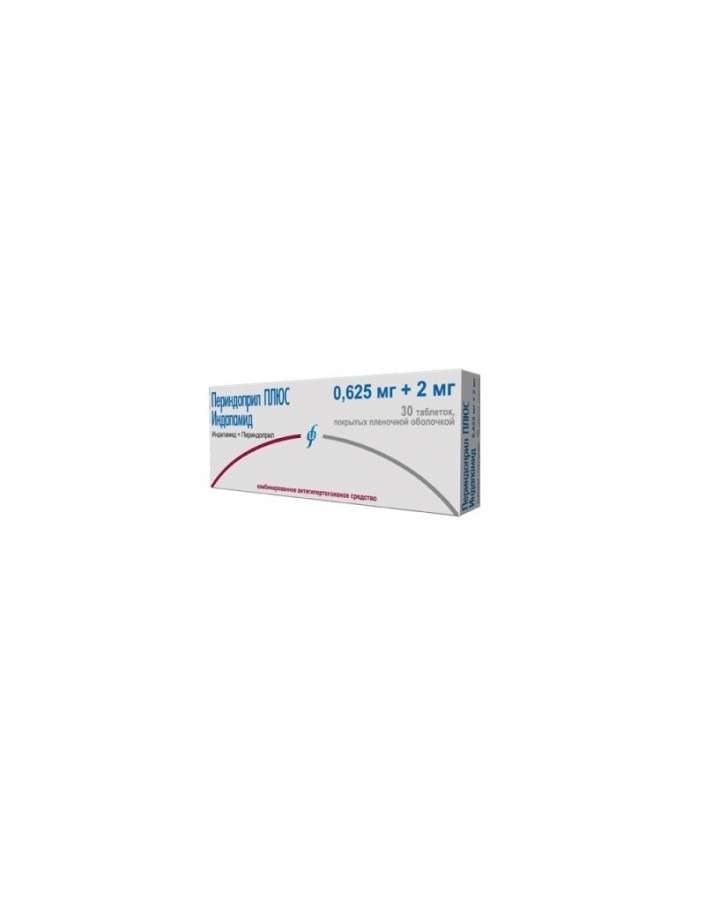 Tablets, film coated from gray-green to green with a grayish shade of color, round, biconvex; on the cross-section, the core is white or almost white.
1 tab.

The antihypertensive effect persists for 24 hours.

A stable reduction in blood pressure (BP) is achieved within 1 month against the background of the use of the drug Perindopril PLUS Indapamide without an increase in heart rate (HR). Termination of treatment does not lead to the development of "withdrawal" syndrome.

Perindopril is an ACE inhibitor, the mechanism of action of which is associated with the inhibition of ACE activity, leading to a decrease in the formation of angiotensin II, eliminates the vasoconstrictor effect of angiotensin II, reduces the secretion of aldosterone. The use of perindopril does not lead to sodium retention and fluid, does not cause reflex tachycardia with prolonged treatment. The hypotensive effect of perindopril develops in patients with low or normal plasma renin activity. Perindopril acts through its main active metabolite, perindoprilat. His other metabolites are inactive.

The action of perindopril leads to the expansion of the veins (decrease in the preload on the heart), due to a change in the metabolism of prostaglandins; decrease in total peripheral vascular resistance (OPS) (decrease in heart load).

In patients with heart failure, perindopril helps reduce the filling pressure of the left and right ventricles; increase in cardiac output and cardiac index; increased regional blood flow in the muscles.

Perindopril is effective for hypertension of any severity: mild, moderate, and severe.

The maximum hypotensive effect develops 4-6 hours after a single ingestion and persists for a day.

Termination of therapy does not lead to the development of "withdrawal" syndrome.

It has vasodilating properties and restores the elasticity of large arteries. Adding a thiazide-like diuretic enhances the hypotensive (additive) effect of perindopril.

Indapamide refers to a sulfonamide derivative, is a diuretic. Inhibits sodium reabsorption in the cortical segment of the renal tubules, increasing the excretion of sodium and chlorine by the kidneys, thus leading to increased diuresis. To a lesser extent increases the excretion of potassium and magnesium. Possessing the ability to selectively block slow Calcium channels, indapamide increases the elasticity of the artery walls and reduces the CRIA. It has an antihypertensive effect in doses that do not have a pronounced diuretic effect. Increasing the dose of indapamide does not entail an increase in the hypotensive effect, but increases the risk of developing adverse events. Indapamide in patients with arterial hypertension has no effect on lipid metabolism - TG, LDL and HDL; on the metabolism of carbohydrates, even in patients with diabetes mellitus and arterial hypertension.

Combined use of perindopril and indapamide does not change their pharmacokinetic parameters,compared to taking these drugs separately.

After oral administration, perindopril is rapidly absorbed from the gastrointestinal tract (GIT). Bioavailability is 65-70%. The maximum concentration (Cmax) in the blood plasma is reached 3-4 hours after ingestion.

Eating reduces the conversion of perindopril to perindopril and the bioavailability of perindopril, so it should be taken 1 time per day in the morning before breakfast. When taking perindopril 1 time / day. Equilibrium concentration (Css) is achieved within 4 days.

Plasma protein binding of perindoprilat is dose-dependent and is 20%. Perindoprilat easily passes through histohematogenous barriers, excluding the blood-brain barrier (BBB). Does not accumulate.

In elderly patients, in patients with renal and heart failure, the elimination of perindoprilat is delayed.

Perindopril kinetics changed in patients with cirrhosis of the liver: the hepatic clearance is reduced by half. However, the amount of perindoprilat formed does not decrease, which does not require dose adjustment.

After ingestion quickly and almost completely absorbed from the gastrointestinal tract.Food intake slows down the absorption somewhat, but does not significantly affect the amount of indapamide absorbed. After ingestion in a single dose of C max in the blood plasma is achieved after 1 h.

Plasma protein binding is 79%. Does not accumulate.

Metabolized in the liver.

In patients with renal failure, the pharmacokinetic parameters of indapamide do not change significantly.

- hypersensitivity to excipients that are part of the drug;

- simultaneous use with potassium-sparing diuretics, potassium and lithium preparations, and in patients with hyperkalemia;

- simultaneous administration of drugs that prolong the QT interval;

- due to the lack of sufficient clinical experience, Perindopril plus Indapamide should not be used in patients on hemodialysis, as well as in patients with untreated heart failure in the stage of decompensation;

- age up to 18 years (efficacy and safety have not been established).

Carefully: the drug should be used for systemic diseases of the connective tissue (includingsystemic lupus erythematosus, scleroderma); during therapy with immunosuppressants (risk of developing neutropenia, agranulocytosis); in the suppression of bone marrow hematopoiesis; decrease in circulating blood volume (BCC) (due to diuretic intake, diet with restricted salt, vomiting, diarrhea); coronary heart disease (CHD); cerebrovascular diseases; Renovascular hypertension; chronic heart failure (NYHA functional class IV); with hyperuricemia (especially accompanied by gout and urate nsfrolithiasis); lability of blood pressure; in hemodialysis using high-flow polyacrylonitrile membranes (risk of developing anaphylactoid reactions); before the procedure of LDL apheresis using dextrin sulphate; simultaneously with the conduct of desensitizing therapy with allergens (for example, hymenoptera poison); in the condition after kidney transplantation; stenosis of aortic and / or mitral valve, hypertrophic obstructive cardiomyopathy; in elderly patients. In patients with a history of angioedema, not associated with taking ACE inhibitors, the risk of its development when taking drugs in this group may be increased. Patients of the Negroid race develop angioedema more often than patients of other races.

On the part of the organ of vision: often - visual impairment.

From the organ of hearing: often - tinnitus.

Since the cardiovascular system: infrequently - a pronounced decrease in blood pressure (including orthostatic hypotension), palpitations; very rarely - cardiac arrhythmias (including bradycardia, ventricular tachycardia, atrial fibrillation), angina pectoris, and myocardial infarction, possibly due to an excessive decrease in blood pressure in high-risk patients; frequency is unknown - arrhythmias of the "pirouette" type (possibly fatal), an increase in the QT interval on the ECG.

On the part of the respiratory system: often - against the background of the use of ACE inhibitors, a dry cough may persist, which persists for a long time while taking this group of drugs and disappears after their withdrawal, shortness of breath; infrequently - bronchospasm; very rarely - eosiophilic pneumonia, rhinitis.

Laboratory indicators: rarely - hypercalcemia; frequency is unknown - hypokatemia, especially significant for patientsat risk; hyponatremia and ginovolemia, leading to dehydration and orthostatic hypotension; increased uric acid and blood glucose levels while taking the drug: a slight increase in creatinine in the urine and in the blood plasma, taking place after discontinuation of therapy, more often in patients with renal artery stenosis, in the treatment of arterial hypertension with diuretics and in the case of renal failure; hyperkalemia, often transient.

When using ACE inhibitors, the syndrome of impaired secretion of thyroid hormone was rarely observed.

Simultaneous use is not recommended. Preparations of lithium: cases of a reversible increase in the concentration of lithium in blood serum have been reported. The risk of its toxic action increases while taking an ACE inhibitor. Simultaneous use of a combination of perindopril and indapamide with lithium preparations is not recommended. In the case of therapy, control of lithium concentration in the blood plasma is necessary. If used simultaneously, special caution is required. . The combination of ACE inhibitors with nonsteroidal anti-inflammatory drugs (NSAIDs) (including selective inhibitors of cyclooxygenase-2 (COX-2) and neselk active NSAIDs, Acetylsalicylic acid in doseshave anti-inflammatory effect) reduces the antihypertensive effect of ACE inhibitors; increases the risk of impaired renal function, up to the development of acute renal failure; increases the content of potassium in the blood serum in patients with already existing renal dysfunction. This combination is recommended to be used with caution, especially in elderly patients. Patients need to compensate for BCC, as well as monitor kidney function before and after starting treatment with Perindopril PLUS with Indapamide. When used simultaneously, caution is required. Glucocorticosteroids (GCS), tetrakozaktid reduce the antihypertensive effect (fluid retention). If used concomitantly with other antihypertensive drugs, the antihypertensive effect of the drug may be enhanced. With the combined use of potassium-sparing diuretics (spironolactone, triamteren. Amiloride.eplerenone), potassium preparations or potassium-containing salt substitutes with ACE inhibitors, an increase in serum potassium up to a fatal outcome is possible.If combined use of an ACE inhibitor and the above drugs is necessary (in the case of confirmed hypokalemia), caution should be taken and regular monitoring of potassium in the blood plasma and ECG parameters should be used. patients with moderate renal failure (CC less than 60 ml / min). If used simultaneously with estramustine, the risk of angioedema increases. edema. When used simultaneously, special care is required. The use of ACE inhibitors may enhance the hypoglycemic effect of hypoglycemic agents for oral administration (sulfonylurea derivatives) and insulin in patients with diabetes mellitus; with their combined use, it is possible to increase glucose tolerance, which may require correction of doses of hypoglycemic