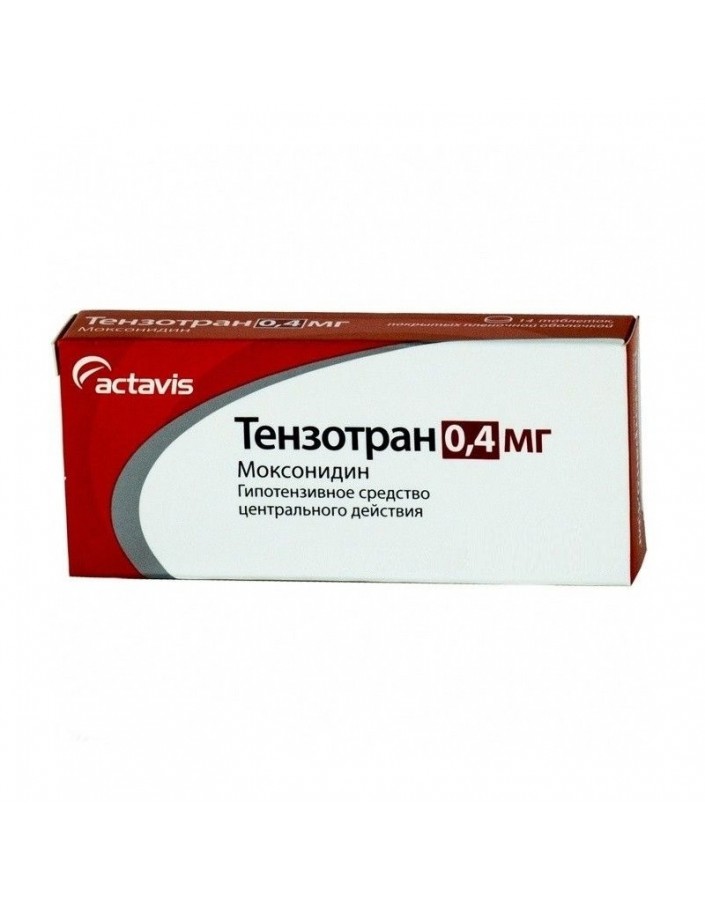 Tenzotran - a centrally acting hypotensive agent. Selective imidazoline receptor agonist responsible for the reflex control over the sympathetic nervous system (localized in the ventro-lateral division of the medulla). It has low affinity with central alpha2-adrenoreceptors, due to the interaction with which the sedative effect and dryness of the oral mucosa are mediated. Moxonidine improves insulin sensitivity by 21% compared with placebo in obese patients and insulin-resistant patients with a moderate degree of arterial hypertension. Effect on hemodynamics: a decrease in systolic and diastolic blood pressure (BP) with a single and prolonged dose of moxonidine is associated with a decrease in the pressure of the sympathetic system on the peripheral vessels, a decrease in total peripheral vascular resistance, while cardiac output and heart rate (HR) are significant do not change.

There are no clinical data on the negative impact on the course of pregnancy. However, it is necessary to prescribe Tenzotran to pregnant women only if the potential benefit to the mother exceeds the potential risk to the fetus.
Moxonidine passes into breast milk, women are advised to stop breastfeeding or stop the drug during the treatment period.

Inside, regardless of the meal, squeezed enough liquid. In most cases, the initial dose of Tenzotran is 0.2 mg per day at a time, preferably in the morning. With insufficient therapeutic effect, the dose can be increased after 3 weeks of therapy to 0.4 mg per day in 2 doses (morning and evening) or once (in the morning). The maximum daily dose, which should be divided into 2 doses (morning and evening), is 0.6 mg. The maximum single dose is 0.4 mg.
In elderly patients with normal renal function, dosage recommendations are the same as for adult patients.
In patients with renal insufficiency (CC from 30-60 ml / min.) And patients on hemodialysis, a single dose should not exceed 0.2 mg. The maximum daily dose is 0.4 mg.

Especially at the beginning of therapy, the most frequent adverse reactions were: dry mouth, headache, asthenia, and drowsiness. The intensity of their manifestation and frequency decrease with repeated intake. Development frequency: very often (more than 1/10), often (more than 1/100, less than 1/10), sometimes (more than 1/1000 and less than 1/100), very rarely (less than 1/1000, including separate messages).
Since the cardiovascular system: often - vasodilation; sometimes - pronounced decrease in blood pressure, orthostatic hypotension, paresthesia, Raynaud's syndrome, impaired peripheral circulation;
From the side of the central nervous system: often - increased fatigue, drowsiness, headache, dizziness; sometimes - insomnia, asthenia;
On the part of the digestive tract: dryness of the oral mucosa; often - nausea, constipation and other violations of the gastrointestinal tract; very rarely - hepatitis, cholestasis;
On the part of the skin and skin: sometimes - allergic reactions;
On the part of the genitourinary system: sometimes - urinary retention or incontinence, impotence, decreased libido;
On the part of the organ of vision: sometimes - dry eyes, causing itching or burning sensation;
Other: sometimes - swelling of different localization, weakness in the legs, angioedema, fainting, fluid retention, anorexia, pain in the region of the parotid glands, gynecomastia.

If it is necessary to cancel simultaneously taken beta-blockers and Tenzotran, first cancel beta-blockers and, after only a few days, Tenzotran.
It is not recommended to prescribe tricyclic antidepressants at the same time as Tenzotran.
During treatment, regular monitoring of blood pressure, heart rate and ECG is necessary.
Moxonidine can be administered with thiazide diuretics, angiotensin-converting enzyme (ACE) inhibitors and blockers of “slow” Calcium channels.
Discontinue taking Tenzotrana should be gradually.
Patients with a rare hereditary pathology of galactose intolerance, lactase deficiency or glucose-galactose malabsorption should not take this drug.

Moxonidine may be administered with thiazide diuretics, slow calcium channel blockers and other antihypertensive drugs.
The combined use of moxonidine with these and other antihypertensive agents leads to an additive effect and an enhancement of the hypotensive effect.
When moxonidine is administered with hydrochlorothiazide, glibenclamide (glyburide) or Digoxin, there is no pharmacokinetic interaction.
Tricyclic antidepressants can reduce the effectiveness of centrally acting antihypertensive drugs; therefore, it is not recommended to prescribe tricyclic antidepressants simultaneously with moxonidine.
Moxonidine moderately enhances reduced cognitive ability in patients taking lorazepam.
The appointment of moxonidine in conjunction with benzodiazepines may be accompanied by an increase in the sedative effect of the latter.
Moxonidine can potentiate the effect of ethanol when used together.
In the appointment of moxonidine in conjunction with moclobemide pharmacodynamic interaction is absent.

There are reports of several cases of non-fatal overdose, when doses up to 19.6 mg per dose were applied.
Symptoms:headache, sedation, drowsiness, marked reduction in blood pressure, dizziness, asthenia, bradycardia, dryness of the oral mucosa, vomiting and pain in the stomach, increased fatigue. Potentially also possible: a short-term increase in blood pressure, tachycardia, hyperglycemia.
Treatment:there is no specific antidote.Gastric lavage, taking activated charcoal and laxatives, symptomatic therapy.
In the case of a pronounced decrease in blood pressure, it is recommended to restore the circulating blood volume due to the introduction of fluid and the introduction of dopamine. Bradycardia can be stopped by atropine.
Alpha-adrenoreceptor antagonists can reduce or eliminate transient hypertension in overdose with moxonidine.