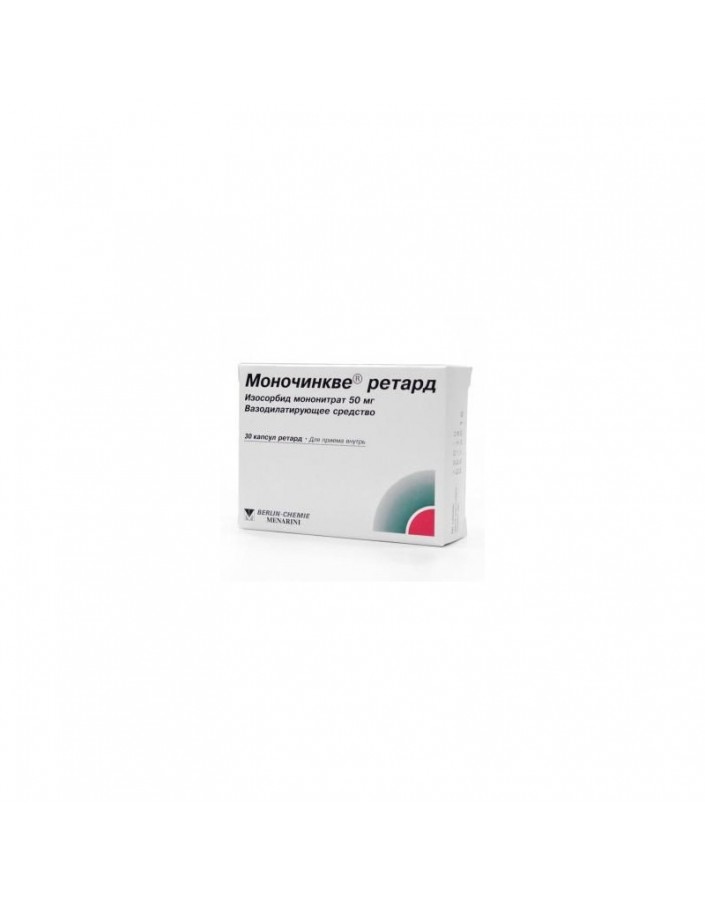 - treatment of chronic heart failure (as part of combination therapy).

Monochinkve® retard appoint 50 mg (1 capsule.) 1 time / day in the morning after eating, without chewing and washing down with a small amount of liquid.

The dose should be adjusted depending on the condition of the patient.

When taking Monocinque ® retard in the recommended dose side effects are not described.

However, as with the use of other nitrates, it is possible:

Cardiovascular: at the beginning of treatment - a "nitrate" headache, which usually decreases after a few days with continued therapy; after the first dose or after increasing the dose - arterial (including orthostatic) hypotension, accompanied by tachycardia, dizziness, weakness.

In pregnancy, the drug can be prescribed only under strict indications, when the expected therapeutic effect for the mother outweighs the potential risk to the fetus.

If there is a need for the drug during lactation, then breastfeeding should be stopped.

The drug is not used for the relief of strokes.

For hypertension, the drug is used only under the supervision of a physician.

The drug is prescribed both as monotherapy and in combination with beta-blockers, Calcium channel blockers, ACE inhibitors, cardiac glycosides or diuretics.

When taking the drug may reduce the ability to concentrate and the speed of psychomotor reactions, and therefore it is not recommended to drive vehicles and engage in other potentially dangerous activities.

No cases of overdose have been reported.However, when symptoms of overdose occur, generally accepted measures are recommended: induce vomiting, flush the stomach. It is necessary to control whether the patient has taken any other medicines at the same time, to monitor the hemodynamic parameters.

The drug should be stored in a dark, out of reach of children at a temperature not higher than 25 ° C.