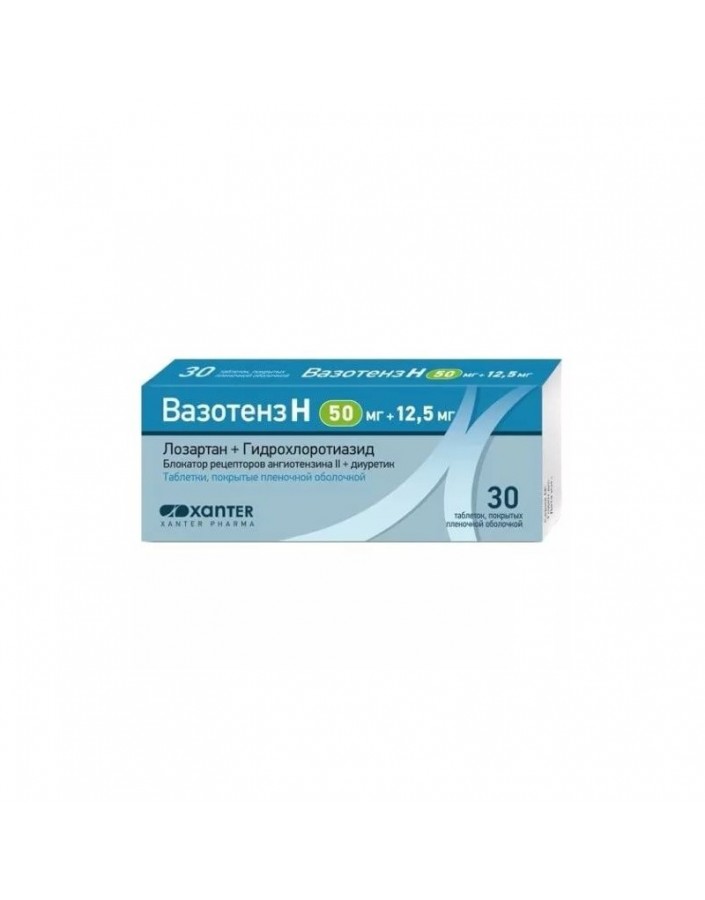 Clinical and pharmacological group.
Antihypertensive drug.
Form release composition.
Tablets, film-coated white, round, biconvex, risky on both sides of the pill and with lateral risks, with the designation "LH" on the one hand from the risks and "1" on the other hand from the risks.
In 1 tab. potassium Losartan 50 mg,
hydrochlorothiazide 12.5 mg
Excipients: mannitol - 82.5 mg, microcrystalline cellulose - 40 mg, croscarmellose sodium - 8 mg, povidone - 4 mg, Magnesium stearate - 3 mg, opadry white - 4 mg (hypromellose 3cP - 1.4 mg, hydroxypropylcellulose - 1.2 mg, titanium dioxide - 0.8 mg, macrogol - 0.4 mg, hypromellose 50cP - 0.2 mg.
Pharmachologic effect.
The combined drug has a hypotensive effect. Contains potassium losartan - angiotensin II receptor antagonist (subtype AT1) and hydrochlorothiazide - diuretic.
Losartan is a specific angiotensin II receptor antagonist (subtype AT1). Does not suppress kinase II - an enzyme that destroys bradykinin. Reduces total peripheral resistance (OPS), the concentration in the blood of adrenaline and aldosterone, blood pressure (BP), pressure in the pulmonary circulation; reduces afterload, has a diuretic effect. Interferes with the development of myocardial hypertrophy, increases exercise tolerance in patients with chronic heart failure.
Hydrochlorothiazide - thiazide diuretic.Reduces the reabsorption of sodium ions, increases urinary excretion of potassium ions, bicarbonate and phosphates. Lowers blood pressure by reducing the volume of circulating blood (BCC), changes in the reactivity of the vascular wall, reducing the pressure of the vasoconstrictor substances and increasing the depressant effect on the ganglia.
Pharmacokinetics.
Losartan is rapidly absorbed from the gastrointestinal tract. Bioavailability is about 30%. Exposed to the effect of first pass through the liver, metabolized by carboxylation to form the active metabolite. Communication with plasma proteins - 99%. Tmax in plasma blood of losartan is 1 hour, the active metabolite is 3-4 hours after ingestion.
T1 / 2 is 1.5–2 h, and its main metabolite is 3-4 h, respectively. About 35% of the dose is excreted in the urine, about 60% through the intestine
Hydrochlorothiazide is rapidly absorbed from the gastrointestinal tract.
T1 / 2 is 5.8-14.8 hours. Not metabolized by the liver. About 61% are excreted by the kidneys unchanged.
Dosage.
Inside, regardless of the meal.
The usual initial and maintenance dose of the drug is 50 mg of losartan / 12.5 mg of hydrochlorothiazide (1 tab.) Per day. For those patients in whom at this dosage it is not possible to achieve adequate control of blood pressure, the dose can be increased to 2 tab. (50 mg / 12.5 mg) or 1 tab. (100 mg / 25 mg) 1 time / day. The maximum dose is 2 tab. (50 mg / 12.5 mg) or 1 tab. (100 mg / 25 mg) 1 time / day.
In general, the maximum hypotensive effect is achieved within 3 weeks after the start of treatment.
There is no need for a special selection of the initial dose for elderly patients.
Overdose.
Symptoms due to overdose of losartan: marked reduction in blood pressure, tachycardia, bradycardia (as a result of vagal stimulation).

Symptoms due to overdose of hydrochlorothiazide: loss of electrolytes (hypokalemia, hyperchloraemia, hyponatremia), as well as dehydration due to excessive diuresis.
Treatment: symptomatic and supportive therapy. If the drug is taken recently, wash the stomach; if necessary, conduct correction of water and electrolyte disorders.
Losartan and its active metabolites are not removed by hemodialysis.
Drug interaction.
Losartan enhances the effect of other antihypertensive drugs. No clinically significant interaction with hydrochlorothiazide, Digoxin, indirect anticoagulants, cimetidine, phenobarbital, Ketoconazole, Erythromycin was noted. There are reports that rifampicin and Fluconazole reduce the level of the active metabolite. The clinical significance of these interactions has not been studied.
Like other drugs that block angiotensin II or its action, the simultaneous administration of potassium-saving diuretics (for example, spironolactone, triamterene, amiloride), potassium preparations, or potassium-containing salt substitutes, can lead to hyperkalemia.
NSAIDs, incl. selective cyclooxygenase-2 inhibitors may reduce the effect of diuretics and other antihypertensive drugs.
In some patients with impaired renal function who received NSAID therapy (including COX-2 inhibitors),treatment with angiotensin II receptor antagonists can cause further impairment of renal function, including acute renal failure, which is usually reversible.
The antihypertensive effect of losartan, like other antihypertensive drugs, may be weakened by taking Indomethacin.
Hydrochlorothiazide.
The following drugs can interact with thiazide diuretics while taking them:
Barbiturates, narcotic drugs, ethanol - potentiation of orthostatic hypotension may occur.
Hypoglycemic agents (oral agents and insulin) - may require dose adjustment of hypoglycemic agents.
Other antihypertensives - an additive effect is possible.
Kolestiramin and Kolestipol reduces the absorption of hydrochlorothiazide.
GCS, ACTH - increased loss of electrolytes, especially potassium.
Pressor amines - a slight decrease in the effect of pressor amines, which does not prevent their use.
Non-polarizing muscle relaxants (for example, tubocurarine chloride) - may increase the effect of muscle relaxants.
Lithium preparations - diuretics reduce the renal clearance of lithium and increase the risk of lithium intoxication, so simultaneous use is not recommended.
NSAIDs, incl. selective COX-2 inhibitors: can reduce the diuretic, natriuretic and antihypertensive effects of diuretics.
Pregnancy and lactation.
Contraindicated for use during pregnancy and lactation.
Taking medications directly acting on the renin / angiotensin system during the II and III trimesters of pregnancy can lead to fetal death. In the event of pregnancy shows the abolition of the drug.
Use of diuretics is usually not recommended for pregnant women due to the risk of jaundice in the fetus and newborn, thrombocytopenia of the mother. Diuretic therapy does not prevent the development of toxicosis of pregnancy.
Side effects.
Adverse reactions are limited to those observed previously with the use of losartan potassium and / or hydrochlorothiazide.
The most frequent side effects in the treatment of essential hypertension include dizziness.
Allergic reactions: anaphylactoid reactions, angioedema, including laryngeal and / or tongue edema, resulting in airway obstruction, and / or swelling of the face, lips, pharynx, and / or tongue, occasionally observed while taking losartan. Some of these patients had previously had angioedema when using other drugs, including ACE inhibitors. It was extremely rare when losartan was taken to exhibit vasculitis, including Shanlein-Genoch disease.
Since the cardiovascular system: a decrease in blood pressure.
On the part of the digestive tract: when taking losartan, rare (1%) cases of hepatitis and diarrhea were reported.
On the part of the respiratory system: when taking losartan - cough.
On the part of the skin: urticaria.
From the laboratory parameters: rarely (1%) - hyperkalemia (serum potassium more than 5.5 mmol / l), increased activity of liver enzymes.
Indications:
- arterial hypertension (in patients for whom combination therapy is optimal).
Contraindications:
- hypersensitivity to the drug components, hypersensitivity to other sulfonamide derivatives;
- anuria;
- severe arterial hypotension;
- severe liver dysfunction;
- pronounced impaired renal function (CC ≤ 30 ml / min.);
- hypovolemia (including on the background of high doses of diuretics);
- pregnancy and lactation;
- age up to 18 years (efficacy and safety have not been established).
With care: patients with bilateral renal artery stenosis or arterial stenosis of a single kidney, with impaired water-electrolyte balance of the blood (dehydration, hyponatremia, hypochloraemic alkalosis, hypomagnemia, hypokalemia).
Carefully The drug is used in patients with diabetes mellitus, hypercalcemia, hyperuricemia and / or gout, as well as in patients with an allergic history and bronchial asthma, as well as in systemic connective tissue diseases (including systemic lupus erythematosus), while co-administered with NSAIDs, in tons. h. COX-2 inhibitors).
Special instructions.
It can be administered with other antihypertensives.
There is no need for a special selection of the initial dose for elderly patients.
The drug can increase the concentration of urea and creatinine in the blood plasma in patients with bilateral renal artery stenosis or arterial stenosis of a single kidney.
Hydrochlorothiazide may enhance hypotension and disturbance of water-electrolyte balance (decrease in circulating blood volume, hyponatremia, hypochloraemic alkalosis, hypomagnesemia, hypokalemia), disrupt glucose tolerance, reduce the excretion of Calcium in the urine and cause a transient, minor increase in calcium concentration in blood plasma, to improve the concentration of cholesterol and triglycerides, provoke the occurrence of hyperuricemia and / or gout.
Influence on ability to drive motor transport and control mechanisms.
There is no information on the impact on the ability to drive a car and other mechanisms.
In case of impaired renal function
Contraindication - pronounced renal dysfunction (creatinine clearance ≤30 ml / min.)
With abnormal liver function.
Contraindications - pronounced abnormal liver function.
Use in old age.
There is no need for a special selection of the initial dose for elderly patients.
Use in childhood
The efficacy and safety of the drug to 18 years have not been established.
Terms and conditions of storage.
At a temperature not exceeding 30 ° C in the reach of children.
Shelf life - 3 years. Do not use after expiration date.
Terms of sale from pharmacies.
The drug is available on prescription.