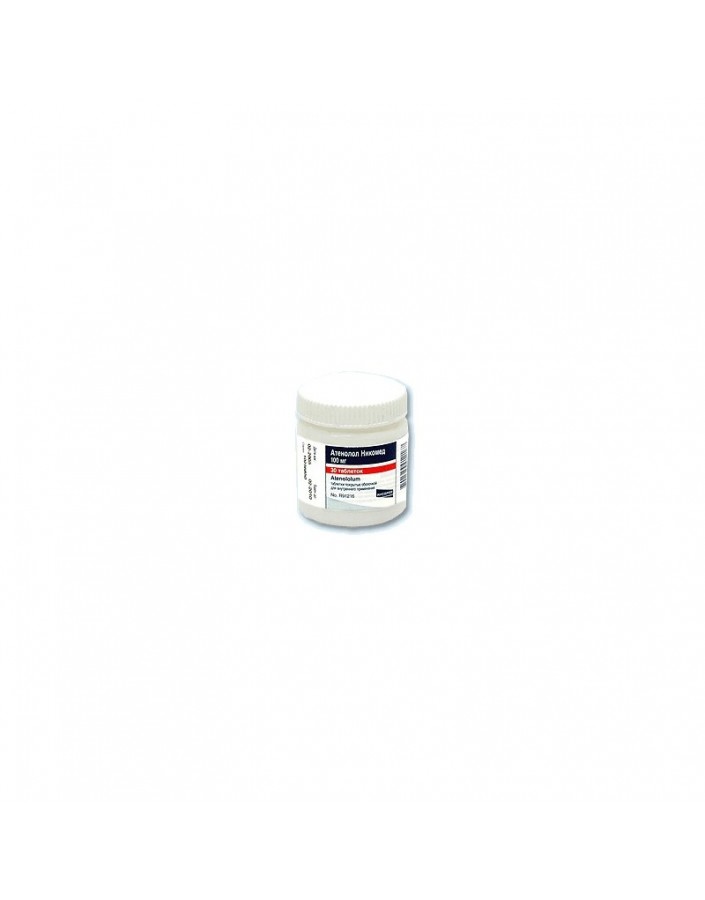 Atenolol - cardio selective beta1-adrenergic blocker without internal sympathomimetic activity. Reduces the stimulating effect on the heart of sympathetic innervation and catecholamines circulating in the blood. It has antianginal, hypotensive and antiarrhythmic effects. Reduces the automatism of the sinus node, reduces heart rate, slows AV-conductivity, reduces contractility and myocardial excitability, reduces myocardial oxygen demand. Does not possess membrane stabilizing activity. When used in moderate therapeutic doses, it has a less pronounced effect on the smooth muscles of the bronchi and peripheral arteries than non-selective beta-blockers.

Inside, before eating, not chewing and squeezed a small amount of liquid. Dosing regimen set individually.
In the treatment of arterial hypertension, angina pectoris and tachyarrhythmias The initial therapeutic dose of atenolol is 50 mg once daily. With insufficient severity of the hypotensive effect, the dose of the drug is increased to 100 mg. To achieve a stable hypotensive effect requires 1-2 weeks of taking the drug. If within two weeks of the use of atenolol the hypotensive effect is not achieved, it is necessary to additionally prescribe other drugs that lower blood pressure.
In the treatment of hypertension the drug at a dose of 25 mg (maintenance dose) per day should be monitored for the stability of the effectiveness of therapy, measuring blood pressure immediately before prescribing the next dose. The maximum daily dose for a number of patients with angina is 200 mg per day.
In case of impaired renal function in patients with CC 15-35 ml / min - 50 mg / day; with CC less than 15 ml / min - 50 mg every other day.
Reducing the dose in the case of the planned cancellation produced gradually, 1/4 dose every 3-4 days.

Cardiovascular: in some cases, bradycardia, arterial hypotension, AV conduction disturbances, and the appearance of symptoms of heart failure.
Gastrointestinal: at the beginning of therapy, nausea, constipation, diarrhea, dry mouth are possible.
Nervous system: at the beginning of therapy, fatigue, dizziness, depression, mild headache, sleep disturbances, sensation of cold and paresthesia in the extremities, reduced patient reactivity, decreased secretion of the lacrimal fluid, conjunctivitis are possible.
On the part of the endocrine system: decrease in potency, hypoglycemic states in patients with diabetes mellitus.
Respiratory: in predisposed patients - the appearance of symptoms of bronchial obstruction.
Allergic reactions: pruritus
Other: increased sweating, redness of the skin.

Atenolol penetrates the placenta, therefore, use during pregnancy is possible only if the intended benefit to the mother outweighs the possible risk to the fetus.
Atenolol is excreted in breast milk, so if necessary, use during lactation is recommended to stop breastfeeding; if this is not possible, close medical attention should be provided to the infant.

It should be used with caution in cases of obstructive respiratory diseases, diabetes mellitus (especially in its labile course), Raynaud’s disease, obliterating diseases of peripheral arteries,pheochromocytoma (in this case, prior treatment with alpha-adrenergic blockers is necessary), thyrotoxicosis, in patients with marked disorders of renal excretory function, in elderly patients.
With the use of atenolol, it is possible to reduce the production of tear fluid, which is important for patients using contact lenses.
Cancellation of atenolol after a long course of treatment should be carried out gradually under the supervision of a physician.
When discontinuing the combined use of atenolol and clonidine, treatment with clonidine is continued for several days after the abolition of atenolol, otherwise severe arterial hypertension may occur.
If it is necessary to perform inhalation anesthesia in patients receiving atenolol, a few days before performing anesthesia, it is necessary to stop taking atenolol or find a remedy for anesthesia with minimal negative inotropic effect.
Not recommended for use in children.
Influence on ability to drive motor transport and control mechanisms
In patients whose activities require increased concentration of attention, the question of outpatient use of atenolol should be resolved only after evaluating the individual response.

Store at room temperature (not above 25 ° C) in a dry, dark place!
Keep out of the reach of children!