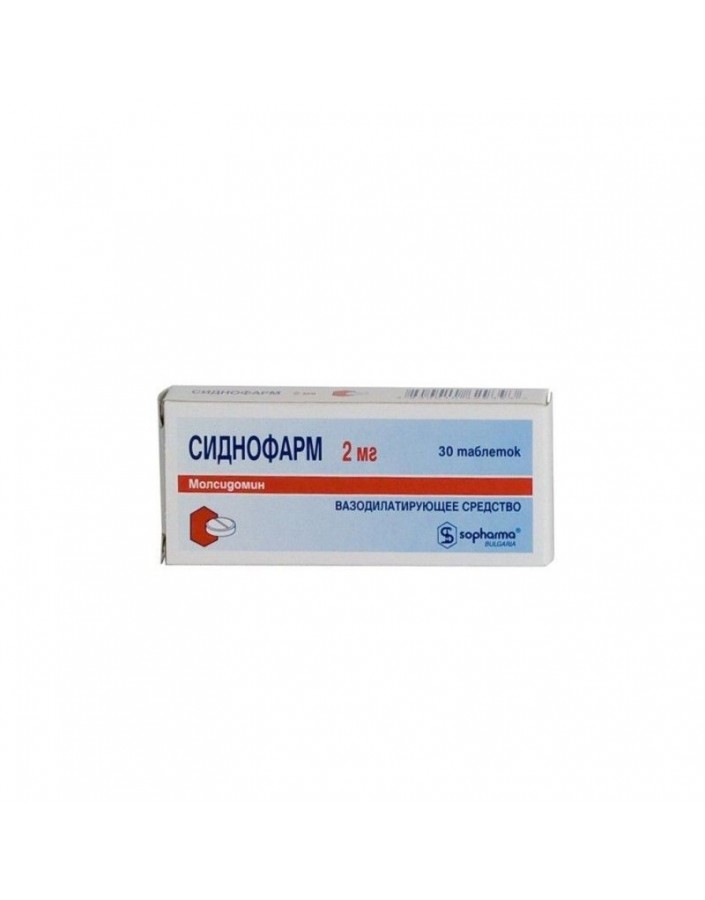 In the blister of 10 tablets. In packing 3 blisters.

Syndopharm is a peripheral vasodilator, an antianginal medication from the group of sydnonimines.
Expands peripheral venous vessels, has antiplatelet, analgesic and antianginal effects. Venodilating activity is caused by the release of nitric oxide (NO), which stimulates soluble guanylate cyclase, after a series of metabolic transformations, and therefore molsidomine is considered as a donor of NO. As a result, there is an accumulation of cGMP, which promotes the relaxation of smooth muscles of the vascular wall (to a greater extent - the veins). Reducing the preload, even without a direct effect on myocardial contractility, leads to the restoration of the relationship between myocardial oxygen demand and its delivery, which is disturbed in IHD (oxygen demand decreases by 26%). The drug relieves spasm of the coronary arteries, improves collateral circulation.
Increases the tolerance of loads, reduces the number of strokes during exercise. Suppresses the early phase of platelet aggregation, reduces the secretion and synthesis of serotonin, thromboxane and other proagregantov.
In patients with chronic heart failure, reducing the preload, reduces the size of the heart chambers. Reduces pressure in the pulmonary artery, reduces the filling of the left ventricle and the tension of the myocardial wall, the stroke volume of the blood.
The action begins 20 minutes after ingestion, reaches a maximum in 0.5-1 hours and lasts up to 6 hours. The development of tolerance with a decrease in efficacy during prolonged therapy is not typical (unlike nitrates).

The use of Sidnofarm contraindicated in pregnancy. If necessary, the appointment of the drug during lactation should abandon breastfeeding.

The dosage regimen and the duration of therapy are set individually. The drug is taken orally, regardless of the meal. The pills are swallowed whole, without chewing and squeezed with a sufficient amount of liquid. The drug is prescribed in the initial dose of 1-2 mg (0.5-1 tab.) 2 times / day. With insufficient severity of therapeutic effect, the multiplicity of appointments is increased up to 3 times / day. The maximum daily dose is 6 mg.

Cardiovascular: often - a decrease in blood pressure, collapse (with initially increased blood pressure, the severity of its decrease is greater than with initially normal or lowered blood pressure); reddening of the skin of the face, tachycardia.
From the side of the central nervous system: headache (usually minor, disappears in the process of further treatment), slowing the speed of psychomotor reactions (mostly at the beginning of treatment), dizziness.
Gastrointestinal: nausea, loss of appetite, diarrhea.
Allergic reactions: skin rash, itching, bronchospasm; rarely - anaphylactic shock.

The drug is not used to relieve an attack of angina.With caution (and under the control of blood pressure) prescribed the first dose of the drug, there may be intense headaches and an excessive decrease in blood pressure with loss of consciousness. Alcohol should be avoided during treatment.
Elderly patients with impaired liver and kidney function and arterial hypotension require dose adjustment.
Influence on ability to drive motor transport and control mechanisms: during the period of treatment (especially at the beginning of therapy), it is necessary to refrain from driving vehicles and engaging in potentially hazardous activities that require increased attention and speed of psychomotor reactions.