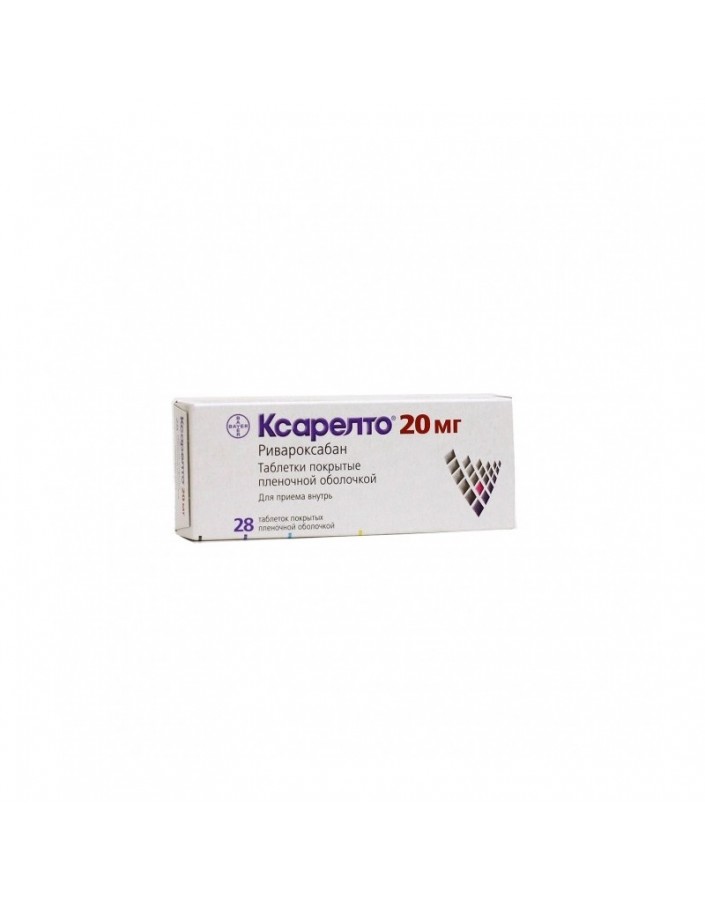 Xarelto is a direct acting anticoagulant. Rivaroxaban is a highly selective direct inhibitor of factor Xa, with high bioavailability when administered.
Activation of factor X to form factor Xa through the internal and external coagulation paths plays a central role in the coagulation cascade.
In humans, dose-dependent inhibition of factor Xa was observed. Rivaroxaban has a dose-dependent effect on prothrombin time and closely correlates with plasma concentrations (r = 0/98) if the Neoplastin kit is used for analysis. When using other reagents, the results will differ. The prothrombin time should be measured in seconds, since the MHO is calibrated and certified only for coumarin derivatives and cannot be used for other anticoagulants. In patients undergoing large orthopedic surgeries, the 5/95 percentile for the prothrombin time (Neoplastin) 2-4 hours after taking the pill (that is, at the maximum effect) varies from 13 to 25 seconds. Also, rivaroxaban increases the APTT dose-dependently and the result of HepTest; however, these parameters are not recommended for evaluating the pharmacodynamic effects of rivaroxaban.Rivaroxaban also affects the activity of the anti-Xa factor, but there are no standards for calibration.
During treatment with rivaroxaban, monitoring of blood clotting parameters is not required.
In healthy men and women older than 50 years, a prolongation of the QT interval under the influence of rivaroxaban was not observed.

For the prevention of VTE in large orthopedic operations
It is recommended to appoint 1 pill (10 mg) 1 time / day.
Duration of treatment: 5 weeks after major surgery on the hip joint; 2 weeks after major knee surgery.
Rivaroxaban can be taken regardless of the meal.
The initial dose should be taken 6-10 hours after surgery, provided hemostasis is achieved.
If a patient misses a dose, rivaroxaban should be taken immediately and the next day, continue with the treatment at 1 pill / day, as before.
Dose adjustment depending on the age of the patient (over 65 years), gender, body weight or ethnic group is not required.
With liver disease
Rivaroxaban is contraindicated in patients with liver disease, accompanied by coagulopathy, which causes a clinically significant risk of bleeding. Patients with other liver diseases are not required to change the dose. The limited clinical data available in patients with moderate hepatic insufficiency (class B on the Child-Pugh scale) indicate a significant increase in the pharmacological activity of the drug. For patients with severe hepatic impairment (Child-Pugh class C), there are no clinical data.
Kidney disease
When prescribing rivaroxaban to patients with mild (CK 80-50 ml / min) or moderate (CK <50-30 ml / min) renal insufficiency, no dose reduction is required.

Hemic and lymphatic: often - anemia (including appropriate laboratory parameters), rarely - thrombocythemia (including elevated platelet count).
Cardiovascular: infrequently - tachycardia, arterial hypotension (including lowering blood pressure, hypotension during procedures).
Gastrointestinal: often - nausea, increased activity of GGT, transaminases (including ALT, ACT). Infrequently - constipation, diarrhea, abdominal pain (including pain in the upper abdomen, feeling of discomfort in the stomach), dyspepsia (including epigastric discomfort), dry mouth, vomiting, increased lipase, amylase, LDH, alkaline phosphatase, concentration bilirubin. Rarely - liver dysfunction, increased concentration of conjugated bilirubin (with a concomitant increase in ALT activity or without it).
From the side of the central nervous system: infrequently - dizziness, headache, short-term loss of consciousness (including syncopal states).
Urogenital: infrequently - renal failure (including an increase in the concentration of creatinine, an increase in the concentration of urea).
From the blood coagulation system: often - hemorrhages after the procedures (including postoperative anemia and bleeding from a wound). Infrequently - hemorrhage (including hematoma and rare cases of hemorrhage into the muscles), bleeding from the gastrointestinal tract (including bleeding from the gums, rectum, bloody vomiting), hematuria (including microhematuria), hemorrhage from the genital tract (including menorrhagia), nasal bleeding.
On the part of the body as a whole: infrequently - local edema, poor health (including fatigue, general weakness), fever, peripheral edema.
Allergic reactions: infrequently - itching (including rare cases of generalized itching), rash, urticaria (including rare cases of generalized urticaria). Rarely - allergic dermatitis.
Other: infrequently - post-traumatic hematomas, discharge from a wound, pain in the extremities.
In other clinical studies of rivaroxaban
Selected cases of hemorrhage in the adrenal glands and the conjunctiva, and also bleeding from a gastrointestinal ulcer with a fatal outcome.
In rare cases, jaundice and hypersensitivity have been observed.
Infrequently - hemoptysis.
Single intracranial hemorrhages are described, especially in patients with arterial hypertension and / or taking concomitant anti-hemostatic drugs, which in isolated cases can be potentially life-threatening.

Store at a temperature not higher than 30 ° C.