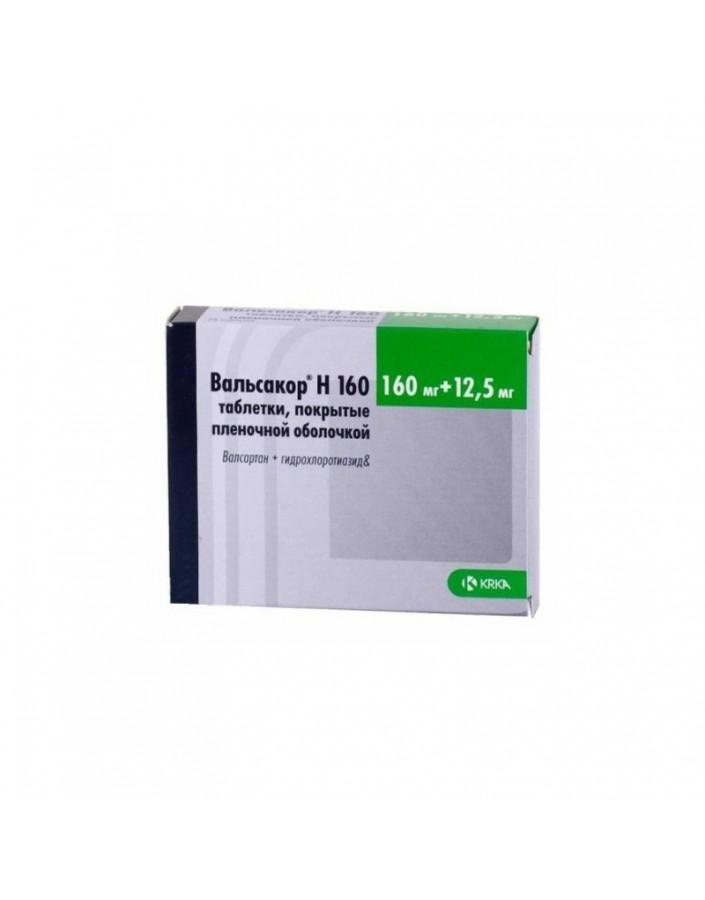 - arterial hypertension (in patients for whom combination therapy is indicated).

The drug is taken orally, regardless of the meal, the multiplicity of reception - 1 time / day.

Valsacor® H160 can be combined with other antihypertensive drugs. Treatment must begin with minimal doses of the drug.

For patients who have not reached the target level of blood pressure on the background of monotherapy (valsartan at a dose of 160 mg or hydrochlorothiazide at a dose of 12.5 mg), a fixed combination of doses is recommended - Valsacor ® H160 (160 / 12.5 mg) 1 time / day.

Maximum antihypertensive effect of the drug Valsacor® H160 (160 / 12.5 mg) develops within 2-4 weeks. If necessary (the level of diastolic blood pressure above 100 mm Hg against the background of monotherapy with valsartan), to achieve a more pronounced effect, an increase (not earlier than in 4-8 weeks) of the drug dose to 160/25 mg is possible (use of the drug Valsacor® ND160) 1 time / day.

Classification of the incidence of side effects of WHO:

The adverse events were generally mild and transient in nature.

With sides of the musculoskeletal system: sometimes - pain in the back, limbs, sprain and tears of ligaments and muscles or muscle tendons, arthritis, arthralgia; rarely - myalgia, muscle weakness, muscle cramps.

- biliary cirrhosis and obstruction of the biliary tract (cholestasis);

- mild and moderate violations of the liver of non-biliary origin (for a given dose of the drug);

- age up to 18 years (efficacy and safety of valsartan in children not installed);

- hypersensitivity to valsartan, hydrochlorothiazide, sulfonamide derivatives and other components of the drug.

WITH caution the drug should be used while taking potassium preparations, potassium-sparing diuretics, potassium-containing food salt substitutes and other drugs that can increase the level of potassium in the blood (eg heparin), chronic heart failure IV functional class according to the NYHA classification, renal failure (CC more than 30 ml / min (0.5 ml / sec)), moderate liver dysfunction, bilateral or unilateral stenosis of the renal arteries or stenosis of the artery of a single kidney, condition after kidney transplantation, and, accompanied by a decrease in bcc and / or sodium ions (including diarrhea, vomiting), primary hyperaldosteronism, stenosis of aortic and mitral valves, hypertrophic obstructive cardiomyopathy (GOKMP), systemic lupus erythematosus, hypersensitivity to other antagonists of receptor antagonists, as well as receptor antagonists; allergic reactions and bronchial asthma.

When planning pregnancy, it is recommended to transfer the patient to alternative antihypertensive therapy with regard to the safety profile.

When confirming pregnancy drug Valsacor® H160 must be canceled as soon as possible.

No data on the allocation of valsartan with breast milk. However, it is known that valsartan penetrates the milk of lactating rats. Hydrochlorothiazide is excreted in breast milk. Therefore, if necessary, drug therapy Valsacor® H160 during lactation should be canceled breastfeeding.

Valsacor® H160 is not recommended for patients with impaired liver function. The maximum recommended daily dose of valsartan in patients with mild or moderate hepatic impairment of non-biliary origin - 80 mg (1 tab. / Day of the drug Valsacor® H80).

Patients with impaired renal function (CC more than 30 ml / min (0.5 ml / sec)) no need to change doses of the drug. Carefully the drug should be used in case of renal failure (CC <10 ml / min), incl. in patients on hemodialysis, with bilateral renal artery stenosis or single kidney artery stenosis.

Contraindicated: age up to 18 years (efficacy and safety of valsartan use in children has not been proven).

Patients with severe chronic heart failure in the stage of decompensation or other conditions, accompanied by stimulation of the RAAS

Use of the drug Valsacor® H160 in this group of patients is usually accompanied by a more pronounced decrease in blood pressure, however, subject to the recommendations on the selection of doses, treatment rarely requires cancellation due to arterial hypotension. Therapy with Valsacor® H160 should be carried out with caution. Due to the suppression of the RAAS activity in some patients, the development of a renal dysfunction may develop. In severe chronic heart failure, oliguria and / or progressive azotemia may develop, up to (in rare cases) acute renal failure and / or death (in rare cases).

In patients with chronic heart failure, regular monitoring of renal function is necessary, while simultaneously prescribing a combination of three classes of drugs - ACE inhibitors, beta-blockers and angiotensin II receptor antagonists (AT1).May be prescribed in combination with other drugs prescribed after myocardial infarction: thrombolytics, Acetylsalicylic acid, beta-blockers and statins.

Patients with hyponatremia and / or reduced BCC

In patients with severe hyponatremia and / or reduced BCC, for example, due to the administration of large doses of diuretics, in rare cases at the beginning of therapy with Valsacor® H160 may develop severe hypotension. Before starting treatment, it is recommended to correct violations of water and electrolyte balance, in particular, by reducing the dose of diuretics. With the development of arterial hypotension with clinical manifestations, it is necessary to give the patient a horizontal position with the legs elevated, fill the BCC and correct the disturbances of water and electrolyte balance. Therapy with Valsacor® H160 can be continued only after stabilization of blood pressure indicators.

The safety of the drug Valsacor® H160 in patients with bilateral or unilateral stenosis of the renal arteries, as well as stenosis of the artery of a single kidney, has not been established (elevated serum concentrations of urea and creatinine are possible).

Patients with impaired renal function (CC more than 30 ml / min (more than 0.5 ml / sec)) do not require changes in the dose of the drug. It is recommended to periodically monitor the content of potassium ions, the concentration of creatinine and uric acid in the serum. Experience of using the drug Valsacor® H160 is absent in patients with recent kidney transplantation.

Patients with impaired liver function is recommended to take no more than 80 mg of valsartan per day.

Valsacor® H160 is not recommended for patients with primary hyper aldosteronism.

There are reports of exacerbation of the course of SLE when using thiazide diuretics.

Valsacor® H160 contains lactose, so the drug should not be prescribed to patients with hereditary intolerance to galactose, lactase-deficient lapp or impaired glucose-galactose absorption syndrome.

Patients need to be careful when driving and working with other complex mechanisms that require increased attention, because may develop dizziness or weakness on the background of arterial hypotension.

Symptoms: pronounced decrease in blood pressure, which can lead to dizziness, collapse and / or fatal shock.

Treatment: symptomatic, it is recommended to induce vomiting and flush the stomach, the appointment of Activated carbon . With the development of arterial hypotension, it is necessary to give the patient a horizontal position with raised legs, fill the BCC and correct the impaired water-electrolyte balance. Hemodialysis is ineffective.

Symptoms: the most frequent symptoms are due to electrolyte deficiency (hypokalemia, hypochloremia, hyponatremia) and dehydration due to excessive diuresis (nausea, drowsiness, arrhythmia, muscle spasm). With simultaneous intake of cardiac glycosides, hypokalemia can aggravate the course of arrhythmias.

Since valsartan does not undergo significant metabolism, significant drug interactions associated with the induction or inhibition of the cytochrome P450 system should not be expected.

Simultaneous reception with others antihypertensives, including diuretics, leads to increased hypotensive effect.

With simultaneous reception lithium preparations and angiotensin II receptor antagonists have reported cases of a reversible increase in the content of lithium ions in serum and an increase in its toxicity. Regular content monitoring is recommended. lithium ions in the blood.

With thiazide diuretics, drugs such as ethanol, barbiturates and opioid analgesics, may potentiate the risk of orthostatic hypotension.

Kolestiramin and Kolestipol: in the presence of anionic exchange resins, the absorption of hydrochlorothiazide decreases.

GCS, ACTH, laxatives, amphotericin B, carbenoxolone, benzathine benzylpenicillin, salicylic acid and salicylates: possible reduction of electrolytes, in particular hypokalemia, it is recommended to regularly monitor the content of potassium ions in the blood.

Cardiac glycosides: risk of arrhythmias on the background of hypokalemia and hypomagnesemia.

Uricosuric drugs (probenecid, sulfinpirazon, allopurinol): may increase the concentration of uric acid in the blood, as well as an increase in the frequency of hypersensitivity reactions to Allopurinol ; if necessary, dose adjustment of uricosuric drugs.

Amantadine: the risk of side effects of amantadine increases.

Cyclosporine: the risk of hyperuricemia and gouty-like complications increases.

Lithium: diuretics reduce renal clearance of lithium and increase the risk of the development of the toxic effect of lithium; It is recommended to control the content of lithium in the blood.

Simultaneous reception with calcium supplements, vitamin D can lead to an increase in the content of Calcium ions in the blood, which can distort the results of the study of the function of the parathyroid glands.

List B. The drug should be kept out of the reach of children, dry, protected from light, at a temperature not exceeding 30 ° C.