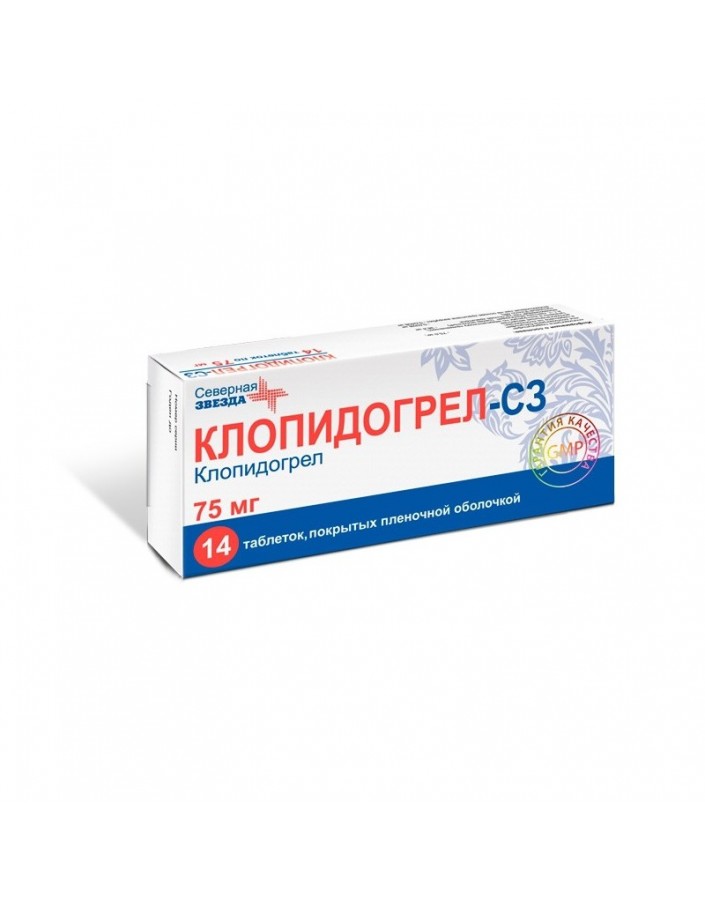 INDICATIONS FOR USE
- Prevention of atherothrombotic events in patients after myocardial infarction (with prescription from several days to 35 days), ischemic stroke (with prescription from 7 days to 6 months) or having a diagnosed occlusive peripheral artery disease.
- Prevention of atherothrombotic events (in combination with acetylsalicylic acid) in patients with acute coronary syndrome:
- without ST segment elevation (unstable angina or myocardial infarction without a Q wave), including patients who underwent stenting for percutaneous coronary intervention;
- With the rise of the ST segment (acute myocardial infarction) with drug treatment and the possibility of thrombolysis.

CONTRAINDICATIONS
- Increased sensitivity to clopidogrel or any of the excipients of the drug.
- Severe liver failure.
- Acute bleeding, such as bleeding from a peptic ulcer or intracranial hemorrhage.
-Rare hereditary lactose intolerance, lactase deficiency and glucose-galactose malabsorption.
Pregnancy and lactation (see "Pregnancy and breastfeeding").
-Child age up to 18 years (safety and efficacy have not been established).
Carefully
- Moderate hepatic impairment, in which a predisposition to bleeding is possible (limited clinical experience of use).
- Renal failure (limited clinical experience).
- Trauma, surgical interventions (see. "Special Instructions").
- Diseases in which there is a predisposition to the development of bleeding (especially gastrointestinal or intraocular).
- Simultaneous administration of nonsteroidal anti-inflammatory drugs, including selective cyclooxygenase-2 inhibitors (COX-2).
- The simultaneous appointment of Warfarin, Heparin, glycoprotein IIb / IIIa inhibitors.
- In patients with a genetically determined decrease in the function of the isoenzyme CYP2C19 in recommended doses (there are literature data indicating that patients with a genetically determined decrease in the function of the isoenzyme CYP2C19 are exposed to a lower systemic exposure to the active metabolite of clopidogrel and have a less pronounced effect of the drug, in addition, they may there is a higher incidence of cardiovascular complications after myocardial infarction compared with patients with normal function of the isoenzyme CYP2C19).
Use during pregnancy and during breastfeeding
As a precaution, taking clopidogrel during pregnancy is not recommended due to the lack of clinical data on its use by pregnant women, although animal studies did not reveal any direct or indirect adverse effects on the course of pregnancy, fetal development, childbirth and postnatal development.Breastfeeding in the case of treatment with clopidogrel should be discontinued, since in studies in rats it has been shown that clopidogrel and / or its metabolites are excreted into breast milk. Whether clopidogrel penetrates human breast milk is unknown.

METHOD OF ADMINISTRATION AND DOSES
Adults and elderly patients with normal activity of the isoenzyme CYP2C19
Clopidogrel-SZ should be taken orally, regardless of the meal.
Myocardial infarction, ischemic stroke and diagnosed occlusive peripheral artery disease
The drug is taken at 75 mg once a day.
In patients with myocardial infarction (MI), treatment can be started from the first days to 35 days of MI, and in patients with ischemic stroke (AI), from 7 days to 6 months after AI.
Acute coronary syndrome without ST segment elevation (unstable stenocardia, myocardial infarction without Q wave)
Treatment with Klopidogrel-SZ should be started with a single dose of a loading dose of 300 mg and then continued with a dose of 75 mg once a day (in combination with Acetylsalicylic acid as an antiplatelet agent at doses of 75-325 mg per day). Since the use of higher doses of acetylsalicylic acid is associated with an increased risk of bleeding, the dose of acetylsalicylic acid recommended for this indication should not exceed 100 mg. The maximum therapeutic effect is observed by the third month of treatment. The course of treatment up to 1 year.
Acute coronary syndrome with ST segment elevation (acute myocardial infarction with ST segment elevation)
Clopidogrel-SZ is administered once at a dose of 75 mg once a day with an initial single dose of a loading dose in combination with acetylsalicylic acid as an antiplatelet agent and thrombolytic (or without thrombolytic). Combination therapy is started as soon as possible after the onset of symptoms and continues for at least four weeks. In patients older than 75 years, treatment with Klopidogrel-SZ should begin without taking its loading dose.
Patients with a genetically determined decrease in the function of the isoenzyme CYP2C19
The weakening of metabolism using the isoenzyme CYP2C19 can lead to a decrease in the antiplatelet effect of clopidogrel. The optimal dosing regimen for patients with a weakened metabolism using the isoenzyme CYP2C19 has not yet been established.
Patients with impaired renal function
After repeated administration of the drug Klopidogrel-SZ at a dose of 75 mg / day in patients with severe kidney damage (creatinine clearance from 5 to 15 ml / min), the inhibition of ADP-induced platelet aggregation (25%) was lower compared to that in healthy volunteers, however, the lengthening of the bleeding time was similar to that of healthy volunteers who received Klopidogrel-SZ at a dose of 75 mg per day. In addition, all patients had good tolerability.
Patients with impaired liver function
After daily administration of clopidogrel SZ at a dose of 75 mg daily for 10 days in patients with severe liver damage, the inhibition of ADP-induced platelet aggregation was similar to that in healthy volunteers. The average bleeding time was also comparable in both groups.
Patients of different ethnicity
The prevalence of CYP2C19 isoenzyme gene alleles, which are responsible for the intermediate and reduced metabolism of clopidogrel to its active metabolite, differs among members of different ethnic groups (see the Pharmacogenetics section). Only limited data are available for representatives of the Mongoloid race to assess the effect of the CYP2C19 isoenzyme genotype on the clinical outcomes.

SPECIAL INSTRUCTIONS
When treating Klopidogrel-SZ, especially during the first weeks of treatment and / or after invasive cardiac procedures / surgery, it is necessary to carefully monitor patients to exclude signs of bleeding, including hidden ones.
Due to the risk of bleeding and hematological undesirable effects (see the “Side effect” section) if clinical symptoms that are suspicious of bleeding occur during the treatment,An urgent clinical blood test should be performed, the activated partial thromboplastin time (APTT), the number of platelets, the indicators of the functional activity of platelets and other necessary studies should be determined.
Clopidogrel-SZ, as well as other antiplatelet drugs, should be used with caution in patients with an increased risk of bleeding associated with injuries, surgical interventions or other pathological conditions, as well as in patients receiving acetylsalicylic acid, nonsteroidal anti-inflammatory drugs, including COX-2 inhibitors, heparin or glycoprotein IIb / IIIa inhibitors.
The combined use of clopidogrel with warfarin can increase the intensity of bleeding (see "Interaction with other drugs"), therefore, with the exception of special rare clinical situations (such as the presence of a floating thrombus in the left ventricle, stenting in patients with atrial fibrillation), the use of clopidogrel and warfarin is not recommended.
If the patient has a planned surgical intervention, and there is no need for an antiplatelet effect, then 7 days before the operation, the use of the drug Klopidogrel-SZ should be stopped.
Clopidogrel prolongs bleeding time and should be used with caution in patients with diseases that predispose to the development of bleeding (especially gastrointestinal and intraocular).
Patients should be warned that when taking the drug Klopidogrel-SZ (alone or in combination with acetylsalicylic acid) it may take longer to stop the bleeding, and that if they have unusual (by localization or duration) bleeding they should report this to their health care provider. Before any forthcoming operation and before the start of taking any new drug, patients should inform the doctor (including the dentist) about taking the drug Klopidogrel-SZ.
Very rarely, after use of the drug Klopidogrel-SZ (sometimes even briefly), there have been cases of thrombocytopenic thrombohemolytic purpura (THP), which is characterized by thrombocytopenia and microangiopathic hemolytic anemia, accompanied by neurological disorders, impaired kidney function and fever. TBD is a potentially life-threatening condition that requires immediate treatment, including plasmapheresis.
During the period of treatment it is necessary to control the functional activity of the liver. For severe violations of liver function, you should remember the risk of hemorrhagic diathesis. The use of Klopidogrel-SZ is not recommended for acute stroke with a prescription of less than 7 days (as there are no data on its use in this condition). Clopidogrel-SZ should not be taken in patients with rare hereditary galactose intolerance, lactase deficiency and glucose-galactose malabsorption syndrome ( see “Composition”).

INFLUENCE ON THE ABILITY TO DRIVE MOTOR TRANSPORT AND MANAGEMENT OF MECHANISMS
Klopidogrel-SZ does not have a significant impact on the ability to drive vehicles or work with machinery.

STORAGE CONDITIONS
In dry, the dark place at a temperature of no higher than 25aboutWITH. Keep out of the reach of children.