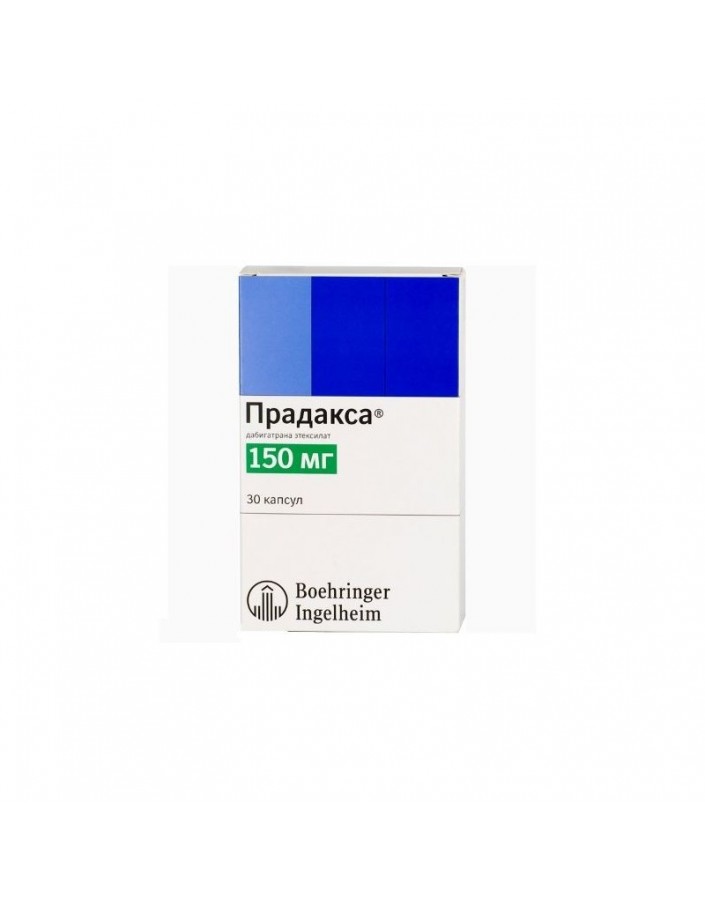 Prevention of venous thromboembolism in patients after orthopedic surgery.

The drug is prescribed inside.

Adults for the prevention of venous thromboembolism (BT) in patients after orthopedic surgery recommended dose is 220 mg / day. one time (2 capsules. 110 mg each).

In patients with moderate renal impairment, the risk of bleeding is increased, the recommended dose is 150 mg / day. one time (2 capsules. 75 mg each).

Patients with severely impaired liver function (class B and C on the Child-Pugh scale) or with liver diseases that may have an effect on survival, or with a more than 2-fold increase in VGN of liver enzymes were excluded from clinical studies. In this regard, the use of Pradaxa in this category of patients is not recommended.

After iv administration, 85% of dabigatran is excreted through the kidneys. In patients with moderate renal impairment (CC 30-50 ml / min) there is a high risk of bleeding. In such patients, the dose should be reduced to 150 mg / day.

Creatinine clearance is determined by the Cockroft formula:

Dabigatran is displayed during dialysis. Clinical studies in these patients have been conducted.

Experience of use in elderly patients over the age of 75 years is limited. The recommended dose is 150 mg / day. once. When conducting pharmacokinetic studies in elderly patients who have decreased kidney function with age, an increase in the content of the drug in the body has been found. The dose of the drug should be calculated in the same way as for patients with impaired renal function.

The transition from treatment with dabigatran etexilate to parenteral administration of anticoagulants should be carried out 24 hours after the last dose of Pradaxa.

1. To remove the capsules from the blister, peeling off the foil.

2. Do not squeeze the capsules through the foil.

3. Remove the foil so that it is convenient to remove the capsules.

Capsules should be taken with water, taken with food or on an empty stomach.

Possible bleeding of any localization. Extensive bleeding is rare. The development of undesirable reactions was similar to the reactions in the case of the use of enoxaparin sodium.

From the hematopoietic system: anemia, thrombocytopenia.

On the part of the digestive system: abnormal liver function, increased activity of hepatic transaminases, hyperbilirubinemia.

From the laboratory indicators: a decrease in hemoglobin and hematocrit

In experimental animal studies, reproductive toxicity was identified. Clinical data on the use of dabigatran etexilate during pregnancy is not available. The potential risk to humans is not known.

Women of reproductive age should avoid pregnancy when treating Pradaxa. In pregnancy, the use of dabigatran etexilate is not recommended, except in cases where the expected benefit outweighs the possible risk.

In the case of dabigatran etexilate, breastfeeding should be discontinued. Clinical data on the use of the drug during breastfeeding is not available.

Patients with severe liver dysfunction (class B and C on the Child-Pugh scale) or with liver disease,able to affect the survival rate, or with more than 2-fold increase in VGN of hepatic enzymes were excluded from clinical studies. In this regard, the use of Pradaxa in these patients is not recommended.

After i / v administration, 85% of dabigatran is eliminated through the kidneys. In patients with moderately impaired renal function (CC 30-50 ml / min), there is a high risk of bleeding. In such patients, the dose should be reduced to 150 mg / day.

Creatinine clearance can be determined using the Cockroft-Gault formula:

Dabigatran is displayed during dialysis. Clinical research in such patients was not conducted.

Unfractionated Heparin can be applied in order to preserve the functioning of the central venous or arterial catheter.

The combined use of Pradaxa in recommended doses for treatment of deep vein thrombosis and Acetylsalicylic acid in doses of 75-320 mg increases the risk of bleeding. Evidence of an increased risk of bleeding associated with dabigatran when taking Pradaxa in the recommended dose, patients receiving small doses of acetylsalicylic acid to prevent cardiovascular diseases are not available. However, the available information is limited, therefore, with the combined use of acetylsalicylic acid in a low dose and Pradaxa, it is necessary to monitor the condition of the patients in order to timely diagnose bleeding.

Careful observation (for symptoms of bleeding or anemia) should be carried out in cases in which you may increase the risk of developing hemorrhagic complications:

Appointment of a NSAID for a short time when used together with Pradaxa with a chain of analgesia after surgery does not increase the risk of bleeding. There are limited data on the systematic intake of NSAIDs with T1 / 2 in less than 12 hours in combination with Pradaxa, there is no evidence of an increased risk of bleeding.

When conducting pharmacokinetic studies, it was shown that in patients with reduced renal function, incl. associated with age, there was an increase in the effectiveness of the drug. In patients with moderately reduced kidney function (CC 30-50 ml / min), it is recommended to reduce the daily dose to 150 mg / day. Pradaxa is contraindicated in patients with severe renal impairment (CC <30 ml / min). With the development of acute renal failure, the drug should be discontinued.

In the case of a traumatic or repeated spinal puncture and prolonged use of an epidural catheter, the risk of developing spinal bleeding or epidural hematoma may increase. The first dose of Pradaxa should be taken no earlier than 2 hours after the catheter is removed. Such patients should be monitored for the purpose of possible detection of neurological symptoms.

The effects of dabigatran etexilate on the ability to drive vehicles and control mechanisms has not been studied.

There is no antidote to dabigatran etexilate or dabigatran.

The use of doses of the drug in excess of the recommended, increases the risk of bleeding. If bleeding develops, treatment should be stopped to determine the causes of bleeding. Given the main route of elimination of dabigatran through the kidneys, it is recommended to ensure adequate diuresis.If necessary, surgical hemostasis or transfusion of fresh frozen plasma is possible.

Dabigatran is removed during dialysis, but there is no clinical experience with this method.

Combined use with drugs that affect hemostasis or coagulation processes, including vitamin K antagonists, can significantly increase the risk of bleeding.

Dabigatran etexilate and dabigatran are not metabolized with the participation of the cytochrome P450 system and do not affect in vitro the human cytochrome P450 enzymes. Therefore, when used together with Pradaxa, drug interactions are not expected.

When combined with Atorvastatin interaction is not observed.

With the combined use of the pharmacokinetics of Diclofenac and dabigatran etexilate does not change, indicating a slight interaction. The use of NSAIDs for a short time to reduce pain after surgery did not increase the risk of bleeding.

There is limited experience in the use of Pradaxa in combination with long-term systematic administration of NSAIDs, and therefore requires careful monitoring of the patients.

Pharmacokinetic interaction with Digoxin was not detected.

In clinical studies, no effect of the combination of pantoprazole or other proton pump inhibitors and Pradaxa on the development of bleeding or pharmacological effects was detected.

When combined with Ranitidine, the degree of absorption of dabigatran does not change.

With the combined use of Pradaxa and Amiodarone, the rate and extent of absorption of the latter and the formation of its active metabolite, deethylamidarodon, does not change. AUC and Cmax increases by 60% and 50%, respectively. With the combined use of dabigatran etexilate and amiodarone, it is necessary to reduce the dose of Pradaxa to 150 mg / day. In connection with the prolonged T1 / 2 of amiodarone, the potential drug interaction may persist for several weeks after discontinuation of amiodarone.

Care should be taken when using Pradaxa with the active inhibitors of P-glycoproteins (verapamil, clarithromycin).

Repeated administration of Verapamil over several days led to an increase in the concentration of dabigatran by 50-60%. This effect can be reduced by prescribing dabigatran at least 2 hours before taking verapamil.

Simultaneous use of Pradaxa with quinidine is contraindicated.

Potential inductors, such as rifampicin and St. John's wort herb extract, can reduce the effect of dabigatran. Care should be taken when sharing dabigatran with similar drugs.

The drug in vials should be stored out of the reach of children, at a temperature not higher than 25 ° C.

The vial should be kept tightly closed to protect it from moisture. After opening the bottle, the drug should be used within 30 days.

The drug in blisters should be kept out of the reach of children, in a dry place, at a temperature not exceeding 25 ° C.