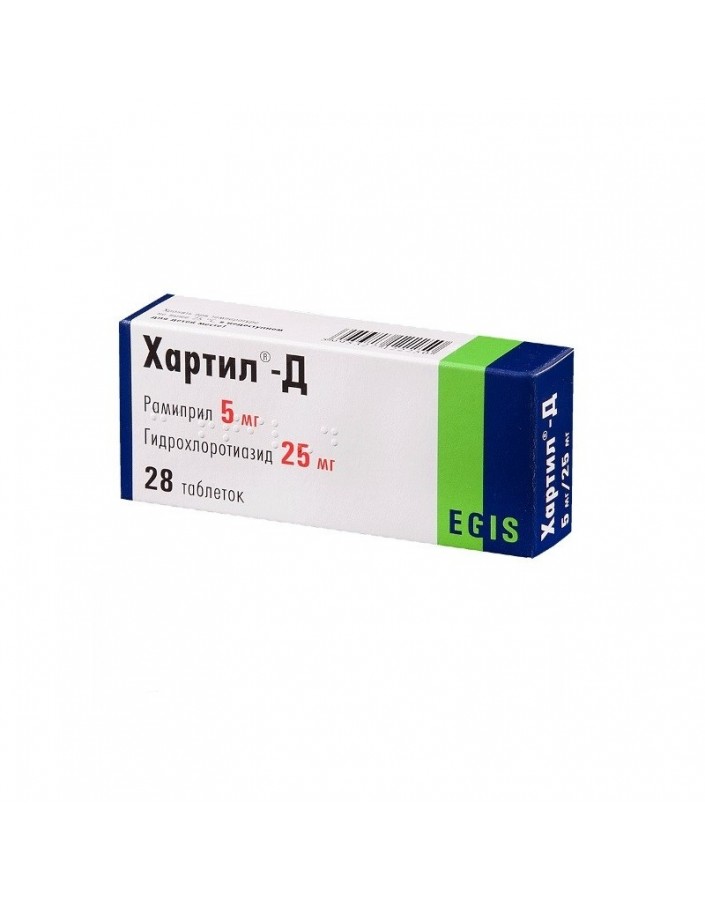 After oral administration, ramipril is rapidly absorbed. Judging by the radioactivity detected in the urine after ingestion of labeled ramipril (kidney excretion is only one of several ways), at least 56% of the drug is absorbed. Simultaneous food intake does not affect absorption.

Ramipril is a prodrug, it is metabolized during the "first pass" through the liver, resulting in the formation (due to hydrolysis, mainly in the liver) of the only active metabolite ramiprilat.In addition to becoming the active metabolite ramiprilat, ramipril is conjugated with glucuronic acid and converted into ramipril diketopiperazine ester. Ramiprilat is also conjugated to glucuronic acid and converted into diketopiperazine ramiprilat (acid). Due to the activation / metabolism of ramipril, bioavailability after oral administration is approximately 20%.

Plasma protein binding is approximately 73% and 56% for ramipril and ramiprilat, respectively.

In experimental studies found that ramipril is excreted in breast milk.

T1/2 ramipril is approximately 1 hour. The decrease in plasma concentration of ramiprilat has a multiphase character. The phase of initial distribution and elimination is characterized by T1/2equal to about 3 hours. Then the intermediate phase follows (T1/2 about 15 h) and the final phase, during which the concentration of ramiprilat in the blood plasma is very low (T1/2 - 4-5 days). This final phase is due to the slow dissociation of ramiprilat from strong, but saturated complexes with ACE. Despite the duration of the elimination phase, Css ramipril is achieved in about 4 days with a daily intake of 2.5 mg or more of ramipril. Effective T1/2 (parameter related to the choice of dose) is 13-17 hours after taking several doses.

After ingestion of 10 mg of labeled ramipril, about 40% of the radioactivity is released through the intestines and 60% by the kidneys.Within 24 hours after ingestion of 5 mg of ramipril, patients with a catheter that removes the bile that was formed showed equal amounts of ramipril and its metabolites excretion by the kidneys and bile. Approximately 80-90% of metabolites excreted by the kidneys and bile were represented by ramiprilat and preparations for its further metabolism. The share of glucuronide and diketopiperazine derivative ramipril accounted for approximately 10-20%, and unmetabolized ramipril accounted for approximately 2% of the total number of ramipril.

The pharmacokinetics of ramipril and ramiprilat in healthy volunteers depend little on age (no differences were found between young people and those aged 65 to 75 years).

If ramipril is administered in high doses (10 mg), an abnormal liver function slows down the activation of ramipril (conversion to ramiprilat) and leads to an increase in its concentration in blood plasma. Removal of ramiprilat slows down.

In adult patients with arterial hypertension and chronic heart failure, there is no significant accumulation of ramipril and ramiprilat after oral administration of ramipril (5 mg 1 time / day for 2 weeks).

In violation of the function of the kidneys excretion decreases and T1/2 increases. Hydrochlorothiazide renal clearance reveals a high correlation with creatinine clearance. In patients with glomerular filtration rate less than 10 ml / min, only 10% of the dose taken is determined in the urine.

According to recent studies, hydrochlorothiazide is partially excreted in the bile. Significant changes in pharmacokinetics in cirrhosis of the liver is not observed.

In patients with heart failure, pharmacokinetics have not been studied.

Indications for use of the drug HARTIL®-E

- arterial hypertension (to patients for whom combination therapy is indicated).

Tablets should be taken 1 time / day. every morning, drinking plenty of water. The drug can be taken regardless of the meal. Tablets are not intended to be divided into parts.

For elderly patients and patients with QA from 30 to 60 ml / min individual doses of each of the components (ramipril and hydrochlorothiazide) must be carefully selected before switching to the combined drug Hartil®-D.

Dose of drug chartil®-D should be as low as possible. The recommended maximum daily dose is 5 mg ramipril and 25 mg hydrochlorothiazide.

Before moving to Hartil®-E in patients with mild or moderate hepatic impairment should pick a dose of ramipril.

Hartil drug is not allowed.®-E patients with severe impaired liver function and / or cholestasis .

Hartil®-D not recommended children and teenagers (under the age of 18) due to lack of safety and efficacy data for this age group.

A number of adverse reactions have been noted while taking ACE inhibitors, ramipril or hydrochlorothiazide.

Severe arterial hypotension was observed at the beginning of the course of treatment and after increasing the dose. This effect is especially characteristic of some risk groups. Symptoms such as dizziness, general weakness, blurred vision, sometimes combined with loss of consciousness (fainting) may occur. Individual cases of tachycardia, palpitations, arrhythmias, angina pectoris, myocardial infarction, severe arterial hypertension and shock, dynamic cerebral circulation disturbance, cerebral hemorrhage and ischemic stroke were observed while taking ACE inhibitors against arterial hypotension.

From the hemopoietic system: rarely - a decrease in the concentration of hemoglobin and hematocrit, leukopenia, thrombocytopenia; very rarely - agranulocytosis, pancytopenia, eosinophilia, hemolytic anemia in patients with deficiency of glucose-6-phosphate dehydrogenase.

On the part of the organ of vision: infrequently - conjunctivitis, blepharitis; rarely - transient myopia, blurred vision.

From the organ of hearing: rarely - ringing in the ears.

If skin reactions are pronounced, an urgent consultation with a doctor is necessary. It has been reported that taking this drug can lead to a symptom complex represented by at least one of the following components: fever, vasculitis, myalgia, arthralgia / arthritis, a positive reaction to anti-nuclear antibodies, increased ESR, eosinophilia and leukocytosis, rash, photosensitization (other skin manifestations are also possible).

* Angioedema often develops in people of the Negroid race. In a small group of patients, the occurrence of angioedema of the face and oropharyngeal region is associated with the use of ACE inhibitors.

** in the case of jaundice or increased activity of the liver enzymes of the patient must be observed.

Contraindications to the use of the drug HARTIL®-E

- angioedema in history, including associated with prior therapy with ACE inhibitors;

- severe liver dysfunction and / or cholestasis;

- condition after kidney transplantation (lack of experience in use);

- galactose intolerance, hereditary lactase deficiency or glucose-galactose absorption disorder syndrome (due to the content of lactose in the preparation);

- Hypersensitivity to ramipril and other ACE inhibitors, thiazides or sulfonamide derivatives, as well as to any of the drug's excipients.

Use of the drug HARTIL®-D during pregnancy and breastfeeding

It is not recommended to take Hartil®-D in the first trimester of pregnancy. In the case of a planned or confirmed pregnancy, it is necessary to switch to another therapy as soon as possible. Controlled studies on the use of ACE inhibitors during pregnancy were not conducted.

Hartil®- D is contraindicated in the II and III trimesters of pregnancy.Long-term administration in the second and third trimesters may cause signs of intoxication in the fetus (depression of renal function, oligohydramnios, delayed ossification of the skull) and the newborn (renal failure of the newborn, hypotension, hyperkalemia).

Prolonged use of hydrochlorothiazide in the third trimester of pregnancy can cause ischemia of the fetus and placenta, the risk of stunted growth. Moreover, in some cases, admission shortly before birth can cause hypoglycemia and thrombocytopenia in newborns. Hydrochlorothiazide may decrease plasma volume and reduce fetoplacental blood flow.

Women taking Hartil®-D during pregnancy (starting from the II trimester), it is necessary to undergo an ultrasound examination to check the condition of the kidneys and skull in the fetus.

Hartil®-D is contraindicated during breastfeeding. Ramipril and hydrochlorothiazide are excreted in breast milk. The decrease and cessation of milk excretion is associated with taking thiazides during breastfeeding. Hypersensitivity reactions to sulfonamide drugs, hyperkalemia and nuclear jaundice may occur. Because of the potential for serious side effects in infants, it is necessary to consider stopping breastfeeding.

At abnormal liver function the reduced or increased effect of the drug Hartil may equally be observed®therefore, in the early stages of treatment, this category of patients requires careful medical supervision. The maximum daily dose in such cases should not exceed 2.5 mg.