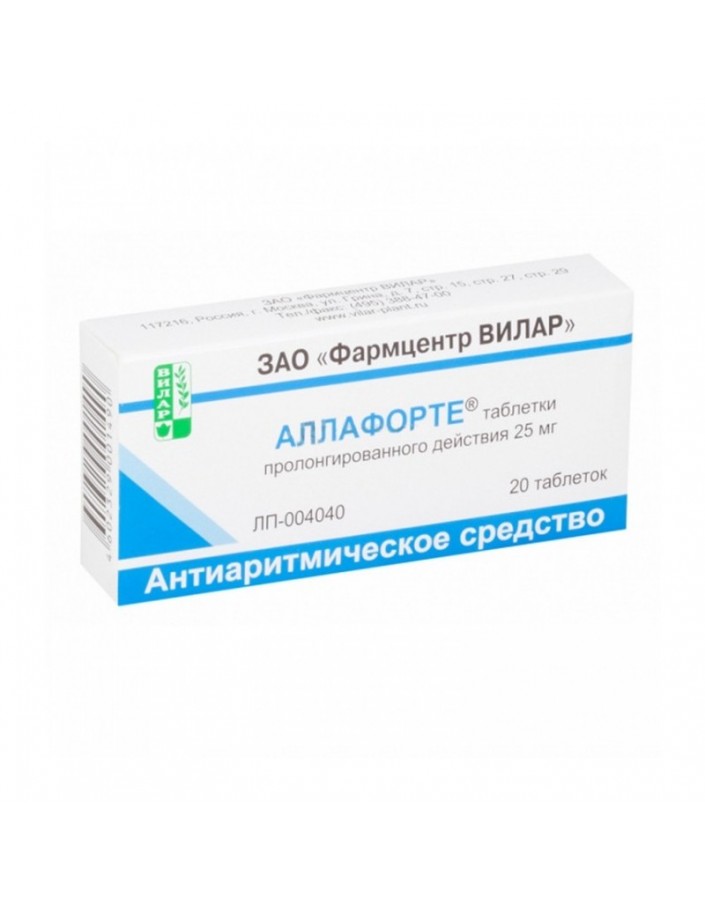 Blocks the "fast" sodium channels of cardiomyocyte membranes. It causes a slowdown of the atrioventricular (AV) and intraventricular conduction, inhibits conduction along additional pathways in Wolf-Parkinson-White syndrome, shortens the effective and functional refractory periods of the atria, AV node, His bundle and Purkinje fibers. It does not affect the duration of the QT interval, AV conduction in the vanterograde direction, heart rate (HR) and blood pressure (BP), myocardial contractility (in the initial absence of heart failure phenomena). Does not inhibit the automatism of the sinus node, does not have a negative inotropic effect, does not possess antihypertensive and m-cholinolytic action.

It has a moderate spasmolytic, coronary dilating, local anesthetic and sedative effect.

When ingested, the effect develops in 40-60 minutes, remains at the reached level of 4-5 hours and gradually decreases. In general, the effect of the drug after a single intake is maintained for at least 12 hours.

When Allaforte® is taken orally inside lappaconitine, hydrobromide is slowly absorbed in the gastrointestinal tract, reaching a maximum concentration in the blood plasma after an average of 80 minutes, then the concentration remains almost unchanged for 4-5 hours and gradually decreases thereafter within 24 hours a half-life (T1 / 2) is about 7.2 hours.

The bioavailability of lappaconitine hydrobromide is 56%, which is associated with the effect of "primary passage" through the liver. Distribution volume 690 l. It penetrates the blood-brain barrier. The main pharmacologically active metabolite is desacetyllappaconitine. With long-term use does not accumulate.

In chronic heart failure II-III functional class according to the NYHA classification, the absorption of lappaconitine hydrobromide is slowed down (the maximum concentration in the blood plasma is reached after 2 hours). Excreted by the kidneys in a modified form (up to 28%), the rest - through the intestines.

Hypersensitivity to the components of the drug, sinoatrial block, AV block II and III degree (without artificial pacemaker), cardiogenic shock, blockade of the right bundle of His bundle, combined with the blockade of one of the branches of the left leg, severe arterial hypotension (systolic blood pressure less than 90 mm Hg).st.), chronic heart failure of the III-IV functional class according to the NYHA classification, severe left ventricular myocardial hypertrophy (≥1.4 cm), the presence of post-infarction cardiosclerosis, acute coronary syndrome, Brugada syndrome, and rhythmogenic cardiomyopathy (dysplasia) of the right ventricle, severe liver and / or kidney dysfunction, age up to 18 years, lactose intolerance, lactase deficiency or glucose-galactose malabsorption, prolonged or shortened QT syndrome, heart defects, arrhythmogenic effect of any antiarrhythmic drug history, pregnancy, breastfeeding, alcohol abuse, AV block I degree with a prolonged PQ interval of more than 200 ms, dilated cardiomyopathy, restrictive cardiomyopathy, myocardi s, the lack of an antiarrhythmic effect in the treatment of drug Allapinin® history.

To be used with caution in violation of intraventricular conduction, blockade of one of the bundle of His bundle, sick sinus syndrome, bradycardia, severe disorders of the peripheral circulation, angle-closure glaucoma,benign prostatic hypertrophy, disorders of water and electrolyte balance (hypokalemia, hyperkalemia, hypomagnesemia), with the simultaneous use of other antiarrhythmic drugs, in ischemic heart disease.

Animal studies have shown that lappaconitine hydrobromide at doses of 1–5 mg / kg does not have a teratogenic and embryotoxic effect. Use of the drug during pregnancy is not recommended due to the lack of controlled studies.

It is possible to use the drug only for health reasons if the intended benefit to the mother outweighs the potential risk of side effects in the fetus / child.

Data on the allocation of lappaconitine hydrobromide in breast milk are not available. The use of the drug is not recommended during breastfeeding.

If the use of the drug Allaforte® during lactation is necessary, breastfeeding should be discontinued.

The drug should be started under the supervision of a physician.

Inside, after eating, swallowing the pill whole and washing it down with a small amount of water at room temperature.

Tablets are strictly forbidden to break, chop or chew!

The dose of the drug Allaforte® is selected individually. Treatment should begin with the appointment of pills of 25 mg every 8 hours. In the absence or insufficiency of the therapeutic effect, the dose should be increased - 25 mg pills every 6 hours or 50 mg pills every 12 hours.To judge the therapeutic effect of the drug at its first use or with an increase in its dose should be no earlier than after 2-3 days of regular use of the drug.

To prevent undesirable effects of the drug on the cardiac conduction system, its use and dose increase should be monitored using an ECG. It is advisable to register the ECG within 1-2 hours after taking the next single dose of the drug.

With prolongation of the PQ interval up to 300 ms or the development of atrial-ventricular blockade of a higher degree, the dose should be reduced, if necessary, temporarily stopping treatment.

The maximum daily dose of the drug is 100 mg (25 mg 4 times a day or 50 mg 2 times a day). At a dose of more than 100 mg per day, the drug is not recommended because of the lack of controlled clinical studies.

The transfer of patients taking Allapinin® to treatment with Allaforte® is carried out by simple replacement starting from the moment of the next dose of one drug to another using the same doses and the interval between doses.

The duration of treatment and the correction of the dosing regimen (dose increase) is determined by the doctor.

According to the World Health Organization, undesirable effectsclassified according to their frequency of development as follows: very often (≥10% of prescriptions); often (≥1% and <10%); infrequently (≥0.1% and <1%); rarely (≥0.01% and <0.1%); very rarely (<0.01%); frequency unknown (insufficient data to estimate development frequency).

Violations by the organ of vision

very often: violations of intraventricular and AV conduction; ECG changes: prolongation of the PQ interval, expansion of the QRS complex;

The drug has a low therapeutic breadth, therefore, severe intoxication can easily occur (especially with the simultaneous use of other antiarrhythmic drugs).

For the treatment of ventricular tachycardia, do not use IA and IC class antiarrhythmic drugs.

Inductors of liver microsomal enzymes do not affect the effectiveness of lappaconitine hydrobromide.

With simultaneous use of lappaconitine hydrobromide with other antiarrhythmic drugs increases the risk of side effects associated with the effect on the sinus node function and atrioventricular conduction. Requires individual selection of doses of each of these drugs.

In a clinical study, when using lappaconitine hydrobromide against the background of standard antihypertensive therapy with angiotensin converting enzyme inhibitors, angiotensin II receptor antagonists, blockers of “slow” Calcium channels of dihydropyridine derivatives, beta-adrenergic blockers did not increase or decrease the antihypertensive effect.

There are no data on the adverse effects of lappaconitine hydrobromide on the efficacy and safety of indirect anticoagulants.

With the cancellation of the previous ineffective antiarrhythmic therapy, treatment with Allaforte® should be started in terms exceeding 2-5 half-lives of these drugs (depending on their dose) in order to avoid mutual reinforcement of adverse effects on the function of the cardiac conduction system.In the case of Amiodarone, which has a very long half-life, the use of the drug Allaforte® is possible immediately after discontinuation of the preceding drug, but additional precautions are required, as is the case with combination therapy.

Compared with the non-spilled form of lappaconitine hydrobromide, Allaforte® provides a slower absorption and even distribution of the concentration of the active substance in the blood between doses, which leads to a decrease in the incidence and severity of side effects.

Every patient who takes Allaforte® should undergo an electrocardiographic and clinical examination prior to the initiation of therapy and during its period for early detection of side effects, evaluating the effectiveness of the drug and the need to continue therapy.

In patients with an established artificial pacemaker, the threshold for its stimulation may increase.

Pacemakers need to be checked and reprogrammed if necessary.

With the development of headache, dizziness, diplopia should reduce the dose of the drug.

With the appearance of sinus tachycardia on the background of long-term use of the drug, the use of beta-blockers is shown.

As with the use of other antiarrhythmic drugs IC class, in patients with significant organic changes in the myocardium, serious adverse effects can occur when using the drug. The use of Allaforte® in patients with coronary heart disease and stable angina requires special control with exercise, because one of the predisposing factors for arrhythmogenic effects of IC drugs is transient myocardial ischemia and high heart rate.

When using IC antiarrhythmic drugs, patients with severe organic changes in the myocardium are prone to serious side effects. The use of the drug Allaforte® in these patients is possible only in exceptional cases, by decision of the council of doctors.

Impact on the ability to drive trans. Wed and fur.

When using the drug, care must be taken when driving and engaging in other potentially hazardous activities that require increased concentration and psychomotor speed due to the risk of dizziness.