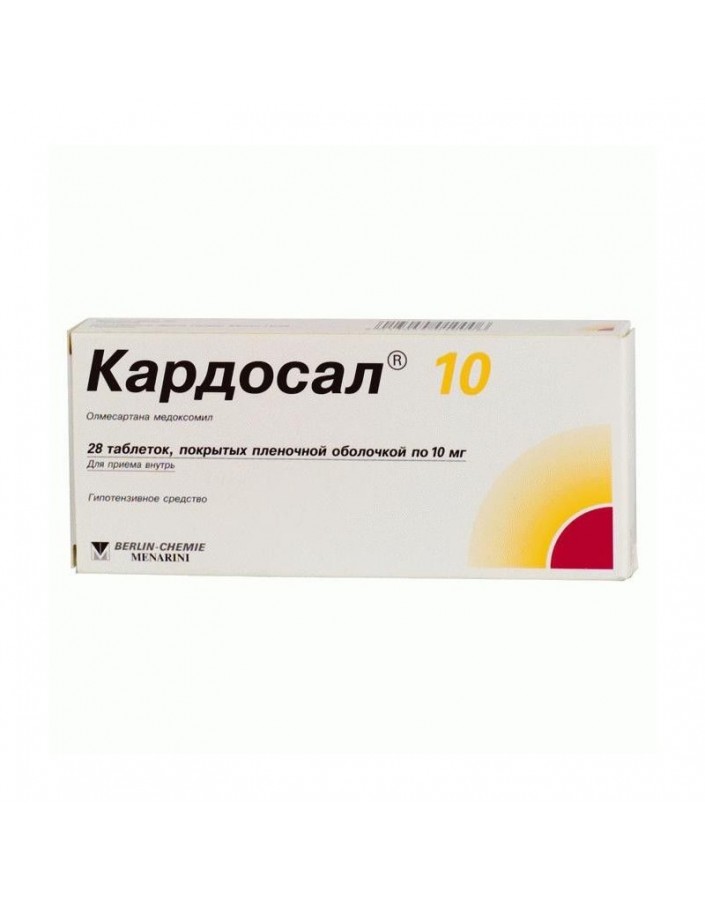 In the blister 14 tablets. In packing 2 blisters.

The active ingredient of the drug Cardosal 10 - Olmesartan medoxomil is a specific antagonist of angiotensin II receptors (type AT 1) for oral administration.

Taking olmesartan medoxomil 1 time per day provides an effective and mild decrease in blood pressure for 24 hours, and the effect after a single dose is similar to the effect of taking the drug twice a day in the same daily dose.

The antihypertensive effect of olmesartan develops, as a rule, already after 2 weeks, and the maximum effect develops after about 8 weeks. after initiation of therapy.

- Hypersensitivity to the active substance or to any of the excipients that make up the drug.
- Obstruction of the biliary tract.
- Renal failure (creatinine clearance (CC) less than 20 ml / min).
- Condition after kidney transplantation (no experience with clinical use).
- Pregnancy.
- Lactation period.
- Age up to 18 years (efficacy and safety have not been established).
- Lactase deficiency, galactosemia or malabsorption syndrome.

Pregnancy Experience with olmesartan medoxomil in pregnant women is absent. However, due to the existing reports of severe teratogenic effects of drugs acting directly on the renin-angiotensin system, like any drug of this class, olmesartan is contraindicated during pregnancy. In the case of pregnancy during treatment with the drug Cardosal 10, the drug must be withdrawn.

- Lactation It is not known whether olmesartan is excreted in breast milk, so if you need to use the drug Cardosal 10 during lactation, breastfeeding for the period of taking the drug should be stopped.

It is recommended to take Cardosal 10 inside every day at the same time, regardless of the meal.

Adults: The recommended initial dose of Cardosal 10 for adults is 1 pill (10 mg) 1 time per day.

In case of insufficient reduction of blood pressure while taking the drug at a dose of 10 mg / day, the dose of the drug can be increased to 20 mg / day (use of the drug Cardosal 20 is possible).

If necessary, an additional reduction in blood pressure can be increased to a maximum dose of 40 mg / day (use of the drug Cardosal 40 is possible) or a diuretic (hydrochlorothiazide) may be added.

The maximum daily dose is 40 mg.

On the part of the circulatory and lymphatic systems: Very rarely - thrombocytopenia.

On the part of the central nervous system: Sometimes - dizziness. Very rarely - a headache.

Symptomatic arterial hypotension, especially after taking the first dose of the drug, can occur in patients with reduced blood volume and / or low sodium levels due to intensive diuretic therapy, restriction of salt intake with food in the diet, and also due to diarrhea or vomiting. Relevant factors should be eliminated before using Cardosal 10.

In patients whose vascular tone and renal function depend to a large extent on the activity of the renin-angiotensin-aldosterone system (for example, in patients with severe chronic heart failure or impaired renal function, including renal artery stenosis), treatment with other drugs acting on this system is associated with the possibility of the development of acute arterial hypotension, azotemia, oliguria, or, in rare cases, acute renal failure. The possibility of a similar effect cannot be excluded when using angiotensin II receptor antagonists.

There is an increased risk of developing severe arterial hypotension and renal failure if a patient with bilateral renal artery stenosis or arterial stenosis of a single functioning kidney receives therapy with drugs that affect the renin-angiotensin-aldosterone system.

As in the case of other angiotensin II receptor antagonists and ACE inhibitors, hyperkalemia may develop when treated with Cardosal 10 if the patient has impaired renal function and / or chronic heart failure. In patients of this risk group, it is recommended to monitor the level of potassium in the blood serum.

As in the case of other angiotensin II receptor antagonists, a combination of lithium and cardosal 10 is not recommended.

As in the case of other angiotensin II receptor antagonists, in patients of the Negroid race suffering from arterial hypertension, the effectiveness of treatment with Cardosal 10 is somewhat lower than in patients of other races.

As in the case of any antihypertensive agent, an excessive decrease in blood pressure in patients with ischemic heart disease or cerebrovascular insufficiency can lead to myocardial infarction or stroke.

With simultaneous use with antacids (aluminum and magnesium hydroxide), a moderate decrease in the bioavailability of olmesartan is possible.

There are reports of a reversible increase in serum lithium concentration and toxicity during simultaneous use of lithium preparations with angiotensin-converting enzyme inhibitors (ACE) and angiotensin II receptor antagonists, therefore, the use of olmesartan medoxomil in combination with lithium preparations is not recommended (see section Special instructions). If necessary, the use of appropriate combination therapy is recommended to regularly monitor the level of lithium in the serum.

- Symptoms: pronounced decrease in blood pressure.
- Treatment: when there is a pronounced decrease in blood pressure, it is recommended to lay the patient on his back, raising his legs. Recommended gastric lavage and / or reception of Activated carbon, therapy aimed at correcting dehydration and disorders of water-salt metabolism, replenishment of circulating blood volume.

Store at a temperature not higher than 30? С.