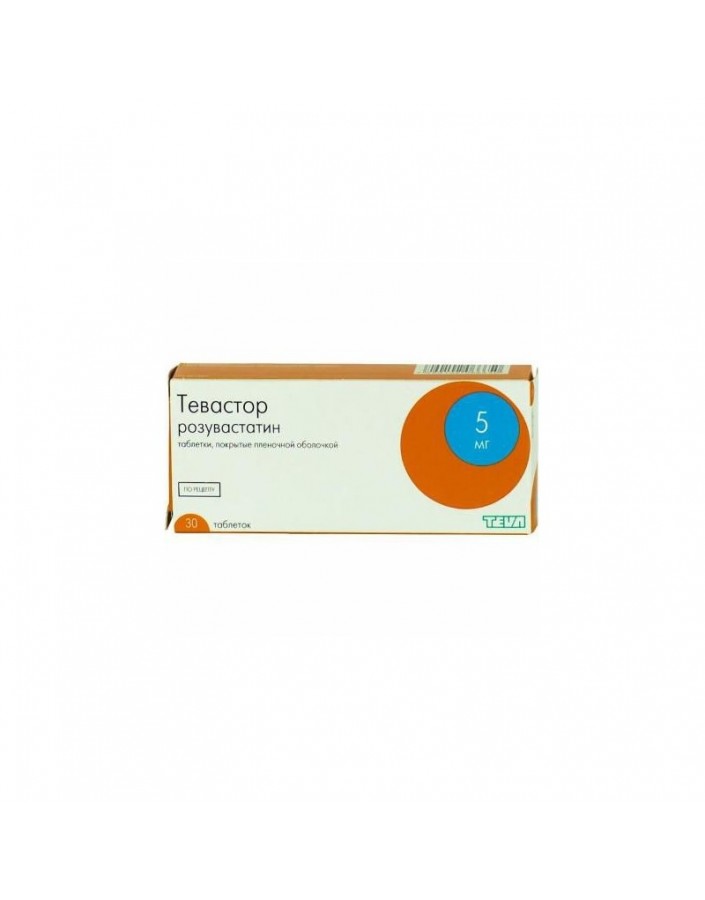 Pharmacodynamics. Rosuvastatin is a selective, competitive inhibitor of HMG-CoA reductase, an enzyme that converts 3-hydroxy-3-methylglutaryl coenzyme A to mevalonate, a precursor of cholesterol (CH). The main target of the action of rosuvastatin is the liver, where Xc is synthesized and the catabolism of low density lipoproteins (LDL) occurs. Rosuvastatin increases the number of “liver” LDL receptors on the cell surface, increasing the uptake and catabolism of LDL, which in turn leads to inhibition of the synthesis of very low density lipoproteins (VLDL), thereby reducing the total number of LDL and VLDL.
Rosuvastatin reduces elevated concentrations of low-density cholesterol-lipoproteins (Xc-LDL), total cholesterol, triglycerides (TG), increases the concentration of high-density cholesterol-lipoproteins (Xc-HDL), and also reduces the concentration of apolipoprotein B (ApoV), Xc-neplvp, Xc-VLDL, TG-VLDL and increases the concentration of apolipoprotein A-1 (ApoA-1), reduces the ratio of Xc-LDL / Xc-HDL, total Xc / Xc-HDL and Xc-non-LPVP / Xc-HDL and ApoV / ApoA- one. The therapeutic effect appears within 1 week after starting rosuvastanin therapy, after 2 weeks of treatment it reaches 90% of the maximum possible effect. The maximum therapeutic effect is usually achieved by week 4 and is maintained with regular intake.

Suction. Maximum concentration (Cmaxa) Rosuvastatin in plasma is reached approximately 5 hours after ingestion. Absolute bioavailability is approximately 20%.
Distribution. Rosuvastatin accumulates mainly in the liver, the main organ of Xc synthesis and clearance of Xc-LDL. Distribution Volume (Vd) - about 134 liters. Binding to plasma proteins (mainly albumin) is approximately 90%.
Metabolism. It is biotransformed to a small extent (about 10%), being a non-core substrate for metabolism by enzymes of the cytochrome P450 system. CYP2C9 is the main isoenzyme involved in rosuvastatin metabolism. CYP2C19, CYP3A4, and CYP2D6 isoenzymes are less involved in metabolism. The main identified metabolites of rosuvastatin are N-dismethyl and lactone metabolites.N-dismethyl is about 50% less active than rosuvastatin, lactone metabolites are pharmacologically inactive. More than 90% of the pharmacological activity on inhibition of circulating HMG-CoA reductase is provided by rosuvastatin, the rest is provided by its metabolites.
Removal. About 90% of the dose of rosuvastatin is excreted unchanged with feces. The rest is excreted in the urine. The half-life (T½) is approximately 19 hours. The T½ does not change with increasing dose of the drug. The average plasma clearance is approximately 50 l / h (coefficient of variation - 21.7%). As in the case of other inhibitors of HMG-CoA redaction, the membrane anion transporter Xc, which plays an important role in the hepatic elimination of rosuvastatin, is involved in the process of hepatic uptake of rosuvastatin.
Pharmacokinetics in special clinical situations. Gender and age do not have a clinically significant effect on rosuvastatin pharmacokinetics.
A comparative study of the pharmacokinetics of rosuvastatin in Japanese and Chinese patients living in Asia showed an approximately twofold increase in the average values ​​of the area under the concentration-time curve (AUC), compared with Europeans living in Europe and Asia. No influence of genetic and environmental factors on the differences in pharmacokinetic parameters was revealed. A pharmacokinetic analysis among different ethnic groups of patients did not reveal clinically significant differences among Europeans, Hispanics, blacks or African Americans.
In patients with mild and moderate renal insufficiency, the plasma concentration of rosuvastatin or N-dismethyl does not change significantly.
In patients with severe renal insufficiency (creatinine clearance (CK) <30 ml / min), plasma concentration of rosuvastatin is 3 times higher, and N-dismethyl concentration is 9 times higher than in healthy volunteers. The plasma concentration of rosuvastatin in hemodialysis patients was about 50% higher than in healthy volunteers.
In patients with various stages of liver failure, there was no increase in Rosal-tastin T½ (patients with a score of 7 or less on the Child-Pugh scale). In 2 patients with grades 8 and 9 on the Child-Pugh scale, an increase in T½ was noted at least 2 times. Experience with rosuvastatin in patients with a score above 9 on the Child-Pugh scale is absent.

The drug Tevastor is contraindicated in pregnancy and during breastfeeding. When diagnosing pregnancy during therapy, the drug should be discontinued immediately.
Women of reproductive age should use reliable methods of contraception. Since cholesterol and products of its biosynthesis are important for the development of the fetus, the potential risk of inhibition of HMG-CoA reductase exceeds the benefits of the drug.
There is no data on the release of rosuvastatin into breast milk, so if you need to use the drug Tevastor during lactation, breastfeeding should be stopped.

Inside at any time of the day, regardless of the meal. The pill should be swallowed whole, washed down with water, not chewed and not crushed. If necessary, taking the drug in a dose of 5 mg should be divided into a pill of 10 mg in half.
Before initiating rosuvastatin therapy, the patient should begin to follow a standard lipid-lowering diet and continue to follow it during treatment. The dose of the drug should be selected individually depending on the indications and therapeutic response, taking into account the current recommendations on target lipid levels. The recommended initial dose of rosuvastatin for patients starting the drug, or for patients transferred from receiving other HMG-CoA reductase inhibitors, is 5 or 10 mg 1 time / day.When choosing the initial dose, one should be guided by the patient’s cholesterol content and take into account the risk of cardiovascular complications, and the potential risk of side effects should be assessed. If necessary, after 4 weeks the dose may be increased.
Patients with severe hypercholesterolemia and with a high risk of cardiovascular complications (especially patients with familial hypercholesterolemia) who have not achieved the desired result when taking a dose of 20 mg during 4 weeks of therapy, with an increase in dose to 40 mg should be under the supervision of a physician due to the possible increased risk of side effects. Especially careful monitoring of patients receiving the drug at a dose of 40 mg is recommended. After 2-4 weeks of therapy and / or increasing the dose of Tevastor, control of lipid metabolism indices is necessary.
Elderly patients (over 65 years) are recommended to begin treatment with a dose of 5 mg.
Patients with renal insufficiency of mild or moderate severity dose adjustment is not required. Use of the drug Tevastor in any doses for severe renal failure (CC less than 30 ml / min) is contraindicated. The use of the drug Tevastor at a dosage of 40 mg in patients with moderate renal impairment (CC less than 60 ml / min) is contraindicated. Patients with moderate renal impairment are recommended an initial dose of 5 mg.For Asian patients, the recommended starting dose is 5 mg. The use of the drug Tevastor in a dose of 40 mg in patients of the Asian race is contraindicated.
The prescription of the drug Tevastor in a dose of 40 mg in patients with factors that may indicate a predisposition to the development of myopathy is contraindicated (See the section “special instructions"). When prescribing doses of 10 and 20, the initial dose for patients in this group of 5 mg is recommended.

Side effects are classified according to the following frequency: very often - at least 10%; often not less than 1%, but less than 10%; infrequently - not less than 0.1%, but less than 1%; rarely - not less than 0.01%, but less than 0.1%; very rarely (including individual messages) - less than 0.01%; frequency unknown - not enough data to estimate the frequency of the phenomenon in the population.
Allergic reactions: infrequently - urticaria, pruritus, rash; rarely angioedema, the frequency is unknown - Stevens-Johnson syndrome. On the part of the nervous system: often - headache, dizziness; very rarely - polyneuropathy, loss of memory.
From the digestive system: often - constipation, nausea, abdominal pain; rarely, a slight, asymptomatic, transient dose-dependent increase in the activity of liver enzymes; very rarely - jaundice, hepatitis; frequency is unknown - diarrhea. As with the use of other inhibitors of HMG-CoA reductase, the frequency of side effects is dose-dependent.
From the musculoskeletal system: often - myalgia; rarely, myopathy; very rarely - rhabdomyolysis with or without acute renal failure, arthralgia. A dose-dependent increase in the activity of creatinine phosphokinase (CPK) is observed in a small number of patients taking rosuvastatin. In most cases, the increased activity of CPK was insignificant, asymptomatic and transient. If CPK activity is more than 5 times higher than VGN, rosuvastatin therapy should be suspended.
From the urinary system: often - proteinuria for a dose of 40 mg, infrequently - proteinuria for a dose of 10-20 mg (in most cases, proteinuria decreases or disappears during therapy, rarely - hematuria).
Other: often - asthenic syndrome.
Laboratory values: increase in the concentration of glucose, bilirubin, the activity of gamma-glutamyl transpeptidase, alkaline phosphatase, dysfunction of the thyroid gland.

When several daily doses are taken simultaneously, the pharmacokinetic parameters of rosuvastatin do not change.
There is no specific antidote. If necessary, conduct symptomatic therapy, control of liver function and CPK activity is necessary. Hemodialysis is not effective.

Proteinuria, mostly of renal origin, detected as a result of testing, is observed in patients taking rosuvastatin at a dose of 40 mg and higher, and in most cases is transient. Such proteinuria is not a symptom of acute or progressive renal pathology. The total number of cases of serious renal complications is observed when using rosuvastatin in a dose of 40 mg. When using the drug Tevastor at a dose of 40 mg, it is recommended to monitor indicators of renal function. The effect on skeletal muscles (myalgia, myopathy and very rarely rhabdomyolysis) is observed in patients taking the Tevastor drug, in particular, at a dosage of over 20 mg. Very rare cases of rhabdomyolysis have been reported with ezetimibe with HMG-CoA reductase inhibitors. The likelihood of developing rhabdomyolysis, as with the use of rosuvastatin, and other HMG-CoA reductase inhibitors, is higher at a dosage of 40 mg.
Determination of CPK activity should not be carried out after intense physical exertion or in the presence of other possible causes of increased CPK activity due to the likely distortion of the results obtained.If the initial activity of CPK is significantly increased (5 times higher than VGN), then in 5-7 days it is necessary to re-measure. It is not necessary to begin therapy if the repeated test confirms the initial activity of CPK (5 times higher than VGN).
Patients should be warned of the need to immediately inform the doctor if new, previously unnoticed symptoms, unexplained muscle pain, weakness or cramps, especially associated with fever and malaise, appear. Therapy should be discontinued if the activity of CPK is 5 times higher than VGN or in the presence of serious muscular symptoms causing permanent discomfort. With the disappearance of symptoms and the normalization of the activity of CPK, it is necessary to consider the issue of repeated use of rosuvastatin with a minimum dose and careful monitoring. Routine monitoring of CPK activity in the absence of symptoms is impractical. It is recommended to make a functional diagnosis of the liver before, and within 3 months after the start of therapy. In patients with secondary hypercholesterolemia due to hypothyroidism or nephrotic syndrome, the primary disease should be treated before prescribing Tevastor.

Studies aimed at studying the effect of the drug Tevastor on the ability to manage vehicles and work with equipment, was not carried out.At use of drug Tevastor it is necessary to be careful in connection with the fact that development of dizziness is possible.