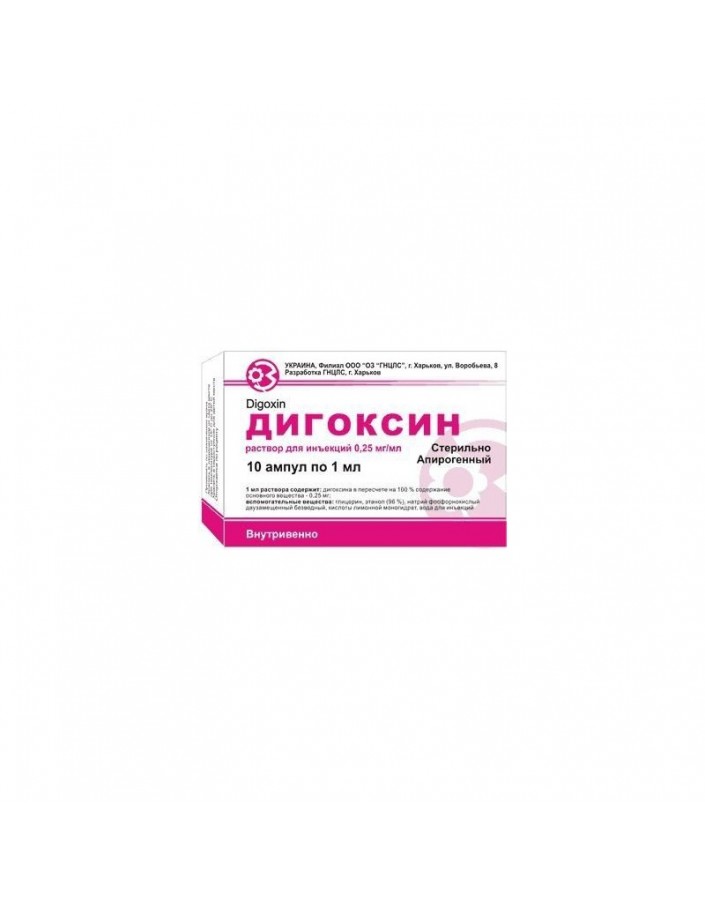 Cardiac glycoside blocks the transport of Na + / K + -ATP-azu, resulting in an increase in the content of Na + in the cardiomyocyte, which leads to the discovery of Ca2 + channels and the entry of Ca2 + into cardiomyocytes. An excess of Na + also accelerates the release of Ca2 + from the sarcoplasmic reticulum. Increasing the concentration of Ca2 + leads to inhibition of the troponin complex, which has a inhibitory effect on the interaction of actin and myosin. The increase in the strength and speed of myocardial contraction occurs according to a mechanism different from the Frank-Starling mechanism (it does not depend on the degree of myocardial pre-stretching). Systole becomes shorter and more energy efficient. As a result of an increase in the contractility of the myocardium, the AEC and IOC increase. Reduces CSR and BWW of the heart, which, along with an increase in myocardial tone, leads to a reduction in its size, and so on. to reduce myocardial oxygen demand. The negative dromotropic effect is manifested in an increase in the refractoriness of the AV node, which makes it possible to use supraventricular tachycardias and tachyarrhythmias in paroxysms. When atrial tachyarrhythmia helps slow heart rate, lengthens diastole, improves intracardiac and systemic hemodynamics. A decrease in heart rate occurs as a result of a direct and indirect effect on the regulation of heart rhythm. A positive bathmotropic effect is manifested in the administration of subtoxic and toxic doses. Direct action is to reduce the automatism of the sinus node. The change in the reflex regulation of the heart rhythm is of greater importance in the formation of a negative chronotropic action: in patients with atrial tachyarrhythmia, the weakest impulses are blocked; an increase in the tone of n.vagus as a result of a reflex from the receptors of the aortic arch and carotid sinus with an increase in IOC; decrease in pressure at the mouth of the hollow veins and the right atrium (as a result of increased contractility of the myocardium of the LV, its more complete emptying, reduction of pressure in the pulmonary artery and hemodynamic unloading of the right heart sections), elimination of the Bainbridge reflex and reflex activation of the sympathoadrenal system (in response to an increase in IOC). It has a direct vasoconstrictor effect, which is most clearly manifested in the event that a positive inotropic effect is not realized. At the same time, the indirect vasodilating effect (in response to an increase in IOC and a decrease in excessive sympathetic stimulation of vascular tone), as a rule, prevails over a direct vasoconstrictor effect, as a result of which OPSS is reduced.

As part of complex therapy of CHF II-IV FK(in the presence of clinical manifestations); tachysystolic form of atrial fibrillation and flutter of paroxysmal and chronic course (especially in combination with CHF).

Digitalis intoxication: on the CVS side - ventricular paroxysmal tachycardia, ventricular premature beats (often polytopic or bigeminia), nodular tachycardia, sinus bradycardia, SA blockade, atrial fibrillation and flutter, AV blockade. On the part of the digestive system: loss of appetite, nausea, vomiting, diarrhea, abdominal pain, intestinal necrosis.On the part of the senses: staining of visible objects in the yellow-green color, the flashing of "flies" before the eyes, reduced visual acuity, the perception of objects in a reduced or enlarged form. On the part of the nervous system: sleep disturbances, headache, dizziness, optic neuritis, sciatica, manic-depressive syndrome, paresthesias. From the side of blood-forming organs and hemostasis system: thrombocytopenic purpura, nasal bleeding, petechiae. Other: hypokalemia, gynecomastia, allergic reactions. Overdose. Treatment: abolition of cardiac glycosides, administration of antidotes (unithiol, EDTA, antibodies to digoxin), symptomatic therapy. As antiarrhythmic drugs use class I drugs (lidocaine, phenytoin). With hypokalemia - in / in the introduction of KCl (6-8 g / day at the rate of 1-1.5 g per 0.5 l of 5% dextrose solution and 6-8 IU of insulin; injected drip for 3 hours). With severe bradycardia, AV blockade - m-holinoblokatory. Beta-adrenostimulyator to enter dangerous because of the possible increase in arrhythmogenic action of cardiac glycosides. With complete transverse blockade with Morgagni-Adams-Stokes attacks, temporary cardiac pacing is indicated.

The drug should be taken orally, in / in (drip, jet). In the course of treatment, 2 periods are distinguished: the period of initial digitalization (saturation) and the period of maintenance therapy. During the initial digitalization period, the body is gradually saturated with cardiac glycoside until the optimal therapeutic effect is achieved. An individual satiating dose (IND) is the total dose (taking into account bioavailability and daily elimination), resulting in an adequate level of digitalization of a particular patient. The appearance of signs of glycoside saturation (primarily clinical) means that the patient received an IND. The therapeutic effect of glycosides is preserved if the body contains at least 80% of the IND. Exceeding it by 50% usually leads to the development of intoxication. The average value of the IND of patients without concomitant pathology of the organs responsible for elimination and metabolism is the average saturating dose (SND). This is a dose of cardiac glycoside, at which the full therapeutic effect is noted in most patients without the onset of toxic symptoms. The maximum tolerated patient dose of cardiac glycoside (without the effects of intoxication) - the individual maximum tolerated dose may exceed the average saturating dose, coincide with it and be less than the DNS. IND ranges from 50 to 200% of the average total dose. A significant reduction in the individual maximum tolerated dose is found in patients with severe myocardial damage and advanced decompensation, with myocardial infarction, "pulmonary" heart. In these patients, signs of intoxication develop earlier than the clinical manifestations of the positive inotropic action of cardiac glycosides. Digoxin elimination coefficient - 20%; SND - 3 mg; SPD (medium maintenance dose) - 0.6 mg.With moderately rapid digitalization, they are prescribed by mouth, 0.25 mg 4 times a day, or 0.5 mg 2 times a day. When on / in the introduction of the required daily dose of digoxin 0.75 mg in 3 administration. Digitalization is achieved on average in 2-3 days. Then the patient is transferred to a maintenance dose, which is usually 0.25-0.5 mg / day for oral administration and 0.125-0.25 mg for intravenous administration. With slow digitalization, treatment immediately begins with a maintenance dose (0.25-0.5 mg / day in 1 or 2 doses). Digitalization in this case occurs in a week in most patients. Patients with hypersensitivity to cardiac glycosides are given lower doses and are digitized at a slow pace. When switching from one dosage form to another, it may be necessary to adjust the dosage regimen (different dosage forms have differences in bioavailability). A dose of 100 µg in the form of a solution for injection is bioequivalent to a dose of 125 µg in the form of pills or elixir. When paroxysmal supraventricular arrhythmias are administered intravenously, 1–4 ml of a 0.025% solution (0.25–1 mg) in 10–20 ml of a 20% dextrose solution. For iv administration, the same dose is diluted in 100–200 ml of a 5% dextrose solution or a 0.9% NaCl solution. The saturation dose for children is 0.05-0.08 mg / kg; this dose is administered within 3-5 days with moderately fast digitalization or within 6-7 days with slow digitalization. Maintenance dose for children is 0.01-0.025 mg / kg / day. In case of violation of renal excretory function, it is necessary to reduce the dose of digoxin: with CC 50-80 ml / min, the SPD is 50% of the SPD for persons with normal renal function; with CC less than 10 ml / min - 25% of the usual dose.

When GOKMP (obstruction of the output LV tract asymmetrically hypertrophic interventricular septum), the appointment of digoxin leads to an increase in the severity of obstruction. In severe mitral stenosis and norm- or bradycardia, CHF develops due to a decrease in LV diastolic filling. Digoxin, increasing the contractility of the myocardium of the right ventricle, causes a further increase in pressure in the pulmonary artery system, which can provoke pulmonary edema or aggravate left ventricular failure. Patients with mitral stenosis are prescribed cardiac glycosides when joining right ventricular failure or in the presence of atrial tachyarrhythmia. In patients with AV blockade II Art. the appointment of cardiac glycosides can aggravate it and lead to the development of a Morgagni-Adams-Stokes attack. The purpose of cardiac glycosides with AV blockade I Art. requires caution, frequent ECG monitoring, and in some cases pharmacological prophylaxis of drugs that improve AV conductivity. Digoxin in WPW syndrome, reducing AV conductivity, contributes to the conduction of impulses through additional conduction paths around the AV node and thus provokes the development of paroxysmal tachycardia. Wear contact lenses should be avoided. As one of the methods for monitoring the level of digitalization, monitoring of the plasma concentration of cardiac glycosides is used.

Reduced bioavailability: Activated carbon , antacids, astringent drugs, kaolin, Sulfasalazine , Kolestiramine (binding in the lumen of the gastrointestinal tract); Metoclopramide , Prozerin (increased gastrointestinal motility). Increased bioavailability: broad-spectrum antibiotics that suppress the intestinal microflora (reducing destruction in the digestive tract). Beta-blockers and Verapamil increase the severity of the negative chronotropic action, reduce the strength of the inotropic effect. Quinidine, methyldopa, spironolactone, Amiodarone , verapamil increase the concentration in the blood due to a competitive decrease in secretion by the proximal tubules of the kidneys. GCS (development of hypokalemia) and thiazide diuretics (development of hypokalemia and hypercalcemia), salts of Ca2 + (especially when i / v administration) reduce the tolerance of cardiac glycosides. Butanedione , Ibuprofen , reserpine, rifampicin, metoclopramide, potassium-sparing diuretics prevent the development of hypokalemia and reduce the risk of relative overdose. Inductors of microsomal oxidation (barbiturates, phenylbutazone, phenytoin, rifampicin, antiepileptic, oral contraceptives) can stimulate the metabolism of digitoxin (if they are canceled, digitalis intoxication is possible). Joint appointment with sympathomimetics increases the risk of arrhythmias. Anticholinesterase drugs increase the likelihood of developing bradycardia.