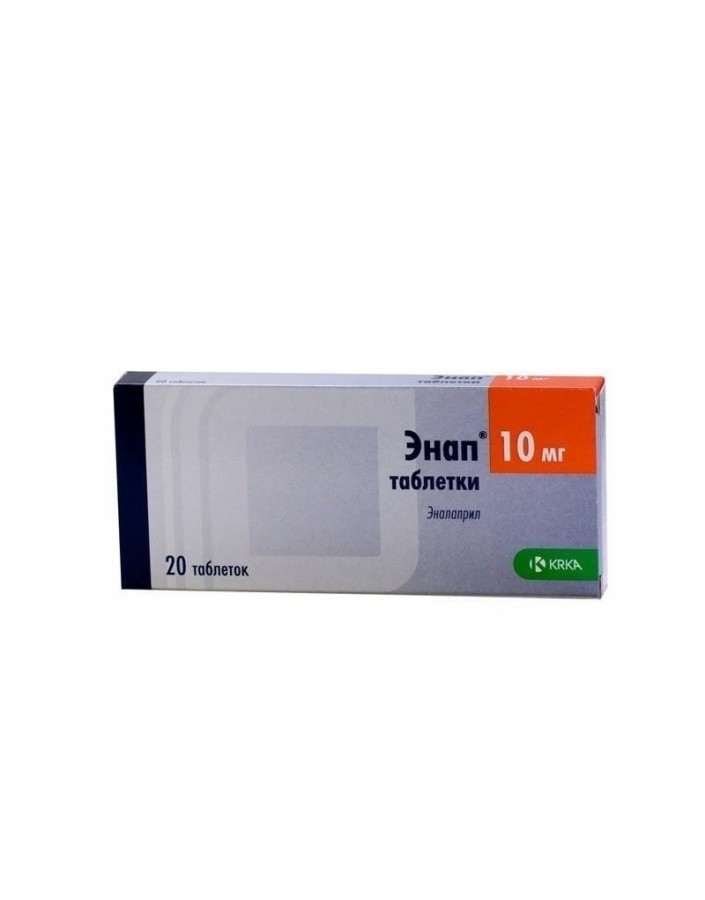 In the blister of 10 tablets. In packing 2 blisters.

Enalapril is an antihypertensive drug whose mechanism of action is associated with the inhibition of the activity of angiotensin-converting enzyme, leading to a decrease in the formation of angiotensin-II.
Enalapril is a “prodrug”: as a result of its hydrolysis, enalaprilat is formed, which inhibits ACE. The mechanism of its action is associated with a decrease in the formation of angiotensin I from angiotensin II, the reduction of which leads to a direct decrease in the release of aldosterone. At the same time, the total peripheral vascular resistance, systolic and diastolic blood pressure (BP), post- and preload on the myocardium decrease.
Expands the arteries to a greater extent than the veins, while a reflex increase in heart rate is not observed.
The hypotensive effect is more pronounced with a high level of plasma renin than with its normal or reduced level.A decrease in blood pressure (BP) within the therapeutic limits does not affect cerebral circulation, the blood flow in the brain vessels is maintained at a sufficient level and against the background of low blood pressure. Enhances coronary and renal blood flow.
With prolonged use, left ventricular myocardial hypertrophy and myocytes of resistive-type artery walls are reduced, prevents progression of heart failure and slows down the development of left ventricular dilatation. Improves blood supply to ischemic myocardium. Reduces platelet aggregation.
It has some diuretic effect.
The onset of the hypotensive effect when taken orally - 1 hour, reaches a maximum after 4-6 hours and lasts up to 24 hours. In some patients, therapy for several weeks is necessary to achieve an optimal level of blood pressure. In heart failure, a noticeable clinical effect is observed with prolonged use - 6 months or more.

- Hypersensitivity to Enalapril or other components of the drug.
- Hypersensitivity to other ACE inhibitors.
- Angioedema in the history of, including the use of ACE inhibitors (allergic reaction with a sharp swelling of the lips, face, neck, and possibly hands and feet, accompanied by suffocation and hoarseness).
- Porphyria.
- Pregnancy.
- Lactation (breastfeeding).
- Patients who have ever had angioedema.
- Age up to 18 years (efficacy and safety have not been established).
Carefully:
- Bilateral renal artery stenosis.
- Stenosis of the artery of a single kidney.
- Primary hyper aldosteronism.
- Hyperkalemia.
- Condition after kidney transplantation.
- Aortic stenosis.
- Mitral stenosis (with impaired hemodynamics).
- Idiopathic hypertrophic subaortic stenosis.
- Systemic diseases of the connective tissue.
- Coronary heart disease.
- Inhibition of bone marrow hematopoiesis.
- Cerebrovascular diseases.
- Diabetes.
- Renal failure (proteinuria - more than 1 g / day).
- Liver failure.
- In patients on a salt-restricted diet.
- In patients on hemodialysis.
- Simultaneous intake with immunosuppressants and saluretics.
- In the elderly (over 65).

During pregnancy and lactation can not prescribe the drug. If pregnancy occurs during the period of treatment with Enap, you should inform your doctor as soon as possible. He will prescribe another antihypertensive treatment.

Tablets should be taken orally with a small amount of liquid. pills can be taken before, during or after a meal. You should get used to taking the drug regularly and at the same time.
If the patient misses taking the drug, it should be taken as soon as possible, but not if there are several hours left before taking the next dose. In this case, you should take only the next dose according to the scheme and not take the missed dose. Doses should never be doubled.
Enapom treatment requires regular medical examinations, especially at the beginning of treatment and / or when determining the most appropriate dose of the drug. The frequency of medical examinations is determined by the attending physician. The dose of the drug is always adjusted depending on the condition of the patient.
Treatment of hypertension: The recommended starting dose is 5 mg once daily. After taking the initial dose, patients should be under medical supervision for 2 hours and an additional 1 hour until blood pressure stabilizes. Dose adjustment depends on the achievement of a therapeutic effect (lowering blood pressure) and, in the absence of a clinical effect, increases in 1–2 weeks by 5 mg. The maintenance dose is usually from 10 to 20 mg, if necessary, and with sufficiently good tolerance, the dose can be increased to 40 mg per day. The maximum daily dose is 40 mg. At higher doses, it is advisable division into 2 doses.
Treatment of hypertension in special clinical situations: The initial dose for patients who could not stop taking diuretics before starting Enap treatment is 2.5 mg as a single dose.Patients with hyponatremia (the concentration of sodium ions in the serum is less than 130 mmol / l) or the concentration of creatinine in the serum more than 0.14 mmol / l, the initial dose is 2.5 mg 1 time per day. Older patients are more likely to have a more pronounced hypotensive effect and lengthening the time of action of the drug, which is associated with a decrease in the rate of enalapril elimination, therefore the recommended initial dose to the elderly is 1.25 mg.
Treatment of congestive heart failure: The recommended starting dose is 2.5 mg once daily. The dose of Enapa should be increased gradually until the maximum clinical effect is achieved, usually in 2 to 4 weeks. The usual maintenance dose ranges from 2.5 mg to 10 mg as a single dose; the maximum maintenance dose is 20 mg twice a day.
Treatment of asymptomatic left ventricular dysfunction: The recommended starting dose is 2.5 mg twice daily; some dose adjustment depends on the tolerance of the drug to patients. Usually the maintenance dose is 10 mg twice a day.
Treatment of hypertension in kidney disease: the dose of Enap is determined depending on the renal function and / or indicators of creatinine clearance. For patients with creatinine clearance of more than 0.5 ml / sec (30 ml / min), the initial dose is 5 mg per day. For patients with creatinine clearance less than 0.5 ml / sec (30 ml / min), the initial dose is 2.5 mg per day and gradually increases until a clinical effect is achieved.
Treatment of patients on hemodialysis: for patients on the day of hemodialysis, 2.5 mg; on other days, the doctor adjusts the dose according to blood pressure.
Treatment by Enap is long, usually during the whole life, unless circumstances arise that require its cancellation.

Hypotension (a sharp decrease in blood pressure) can be observed (even several hours after the first dose) in patients with severe heart failure or severe impaired renal function, as well as in patients with impaired water and electrolyte balance due to diuretic therapy, salt-free diet, diarrhea, vomiting or being on hemodialysis. A marked reduction in blood pressure (BP) is usually manifested in the form of nausea, increased heart rate (HR) and fainting.
In the event of arterial hypotension, the patient needs to take a horizontal position with a low head and call a doctor.
Hypotension and its serious consequences are rare and have a transient nature. Transient hypotension is not a contraindication to further treatment with the drug. As soon as the blood pressure stabilizes, the patient normally tolerates receiving subsequent doses of the drug. Hypotension can be avoided by interrupting diuretic treatment and avoiding a salt-free diet before starting treatment with Enap, if possible.
If there is a recurrence of arterial hypotension, accompanied by symptoms such as nausea, increased heart rate (HR) and fainting, you should consult a doctor.
Renal function should be monitored before and during treatment with Enap.During treatment with Enap, an increase in serum potassium is possible, especially in patients with chronic renal failure, diabetes mellitus, with simultaneous administration of potassium-saving diuretics (such as spironolactone, amiloride and triamterene) or pills containing potassium. Therefore, while taking Enap and these drugs, you must strictly follow the instructions of the doctor. If the patient feels muscular weakness or irregular heartbeats during the period of such treatment, you should immediately inform your doctor.
Allergic reactions can develop due to the use of some types of filtering membranes used in hemodialysis or other types of blood filtration (apheresis). If a doctor plans such treatment, he should be warned about the simultaneous treatment of Enap.
During the period of allergy treatment (desensitization) to aspen or bee venom, hypersensitivity reactions may occur. If a doctor plans such treatment, he should be warned about the simultaneous treatment of Enap.
The efficacy and safety of the drug in the treatment of children has not been established, so it should not be prescribed to children.
Influence on ability to drive motor transport and control mechanisms: in some patients, the drug can cause severe arterial hypotension and dizziness, especially at the beginning of treatment, thus having an indirect and transient effect on the ability to drive vehicles and machinery.

The patient should refrain from taking alcoholic beverages, since ethanol increases the decrease in blood pressure (BP) with enalapril.
The simultaneous use of enalapril and diuretics or other antihypertensive drugs increases the effectiveness of these drugs.
Interaction with drugs used to treat heart failure (cardiac glycosides) has no clinical significance.
Before surgery, the physician should be informed that the patient is taking enalapril because there is a risk of arterial hypotension during general anesthesia.
The simultaneous use of enalapril and nonsteroidal anti-inflammatory drugs (NSAIDs) or Acetylsalicylic acid (aspirin), as well as estrogen can reduce the effectiveness of enalapril and increase the risk of renal dysfunction.
The simultaneous use of certain diuretics (spironolactone, amiloride, or triamterene) and / or the additional prescription of pills containing potassium may cause an increase in the level of serum potassium (hyperkalemia).
Drugs that cause bone marrow depression increase the risk of developing neutropenia and / or agranulocytosis.
Immunosuppressants, Allopurinol, cytotoxic drugs enhance hematotoxicity.
Enalapril weakens the effect of products containing theophylline.
The simultaneous use of lithium preparations may enhance the side effect of lithium.
At the same time taking the drug Enap with cimetidine increases the half-life (T 1/2) of Enap. If the patient is already taking the above drugs or is advised to take any of them, he should inform the doctor that he is taking Enap.

If the patient has taken too many pills at one time, you should immediately call a doctor.
Symptoms: excessive reduction of blood pressure (BP) until the development of collapse, myocardial infarction, acute cerebrovascular accident or thromboembolic complications, convulsions, stupor.
Treatment: the patient is transferred to a horizontal position with a low head. In mild cases, gastric lavage and ingestion of a saline solution are shown, in more serious cases, measures aimed at stabilizing blood pressure (BP), intravenous saline, plasma substitutes, if necessary, intravenous angiotensin II, hemodialysis (speed removal of enalaprilat - 62 ml / min.

Store in a dark place at a temperature not exceeding 25 ° C.