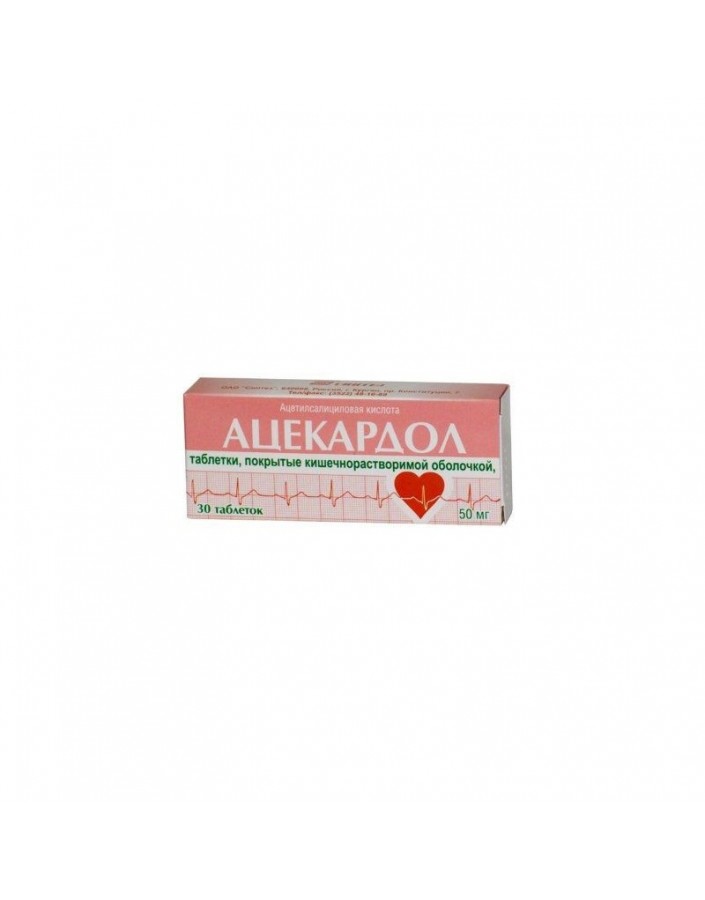 - prevention of stroke (including in patients with a transient violation of cerebral circulation);

- prevention of deep vein thrombosis and pulmonary thromboembolism and its branches (for example, during prolonged immobilization as a result of a large surgical intervention).

- erosive and ulcerative lesions of the digestive tract;

- bronchial asthma induced by taking salicylates and NSAIDs, the Fernan-Widal triad, (a combination of bronchial asthma, recurrent nasal polyposis and paranasal sinuses and intolerance to ASA);

- combined use with Methotrexate at a dose of 15 mg / week. and more;

- I and III trimesters of pregnancy;

- hypersensitivity to acetylsalicylic acid and / or other components of the drug;

- Hypersensitivity to other NSAIDs.

Tablets Atsekardola should be taken orally, before meals, with a large amount of liquid. Acecardol intended for prolonged use. The duration of therapy is determined by the attending physician. The average dose is 100-200 mg / or 300 mg every other day (the first pill must be chewed for faster absorption).

On the part of the digestive system: nausea, heartburn, vomiting, abdominal pain, ulcerative lesions of the mucous membrane of the stomach and duodenum (including perforative), gastrointestinal bleeding, increased activity of liver enzymes.

On the part of the respiratory system: bronchospasm.

On the part of the blood system: increased bleeding; rarely - anemia.

From the side of the central nervous system: dizziness, tinnitus.

The patient can take Acecardol after prescribing a doctor. Acetylsalicylic acid can provoke bronchospasm, as well as cause attacks of asthma and other hypersensitivity reactions. Risk factors are a history of bronchial asthma, hay fever, nasal polyposis, chronic diseases of the respiratory system, and allergic reactions to other drugs (eg, skin reactions, itching, urticaria).a